A Different Kind of Food Tour in Prague

When traveling to a new place, one of the best ways to experience the local flavor is to sign yourself up for a food tour. Once we had our plane tickets booked for Prague, we immediately started researching some possibilities. However, as someone who doesn’t eat a lot of meat, I quickly became discouraged at the lack of diversity in the food offerings on some of the available tours. I am aware that Czech cuisine consists of a large variety of meat, but it started to become obvious that we simply wouldn’t get the value out of most of the food tours we came across, and several mentioned their inability to accommodate special preferences.

We reached out to JayWay Travel who graciously hosted us in Prague and they went above and beyond to hook us up with a local willing to provide us with a personalized food tour catered to our dietary preferences. For our off-the-radar food tour, we visited an appropriately off-the-beaten path neighborhood in Prague: Karlin (pictured below). 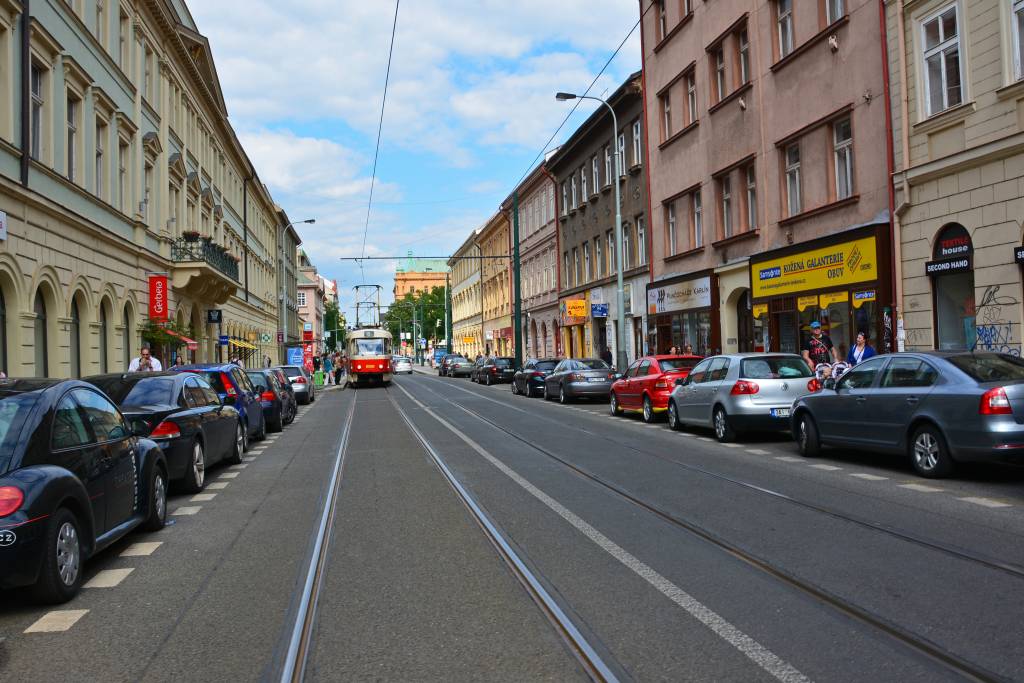 Our first stop was Polevkarna, which specializes in flavorful soups and delicious pastries. 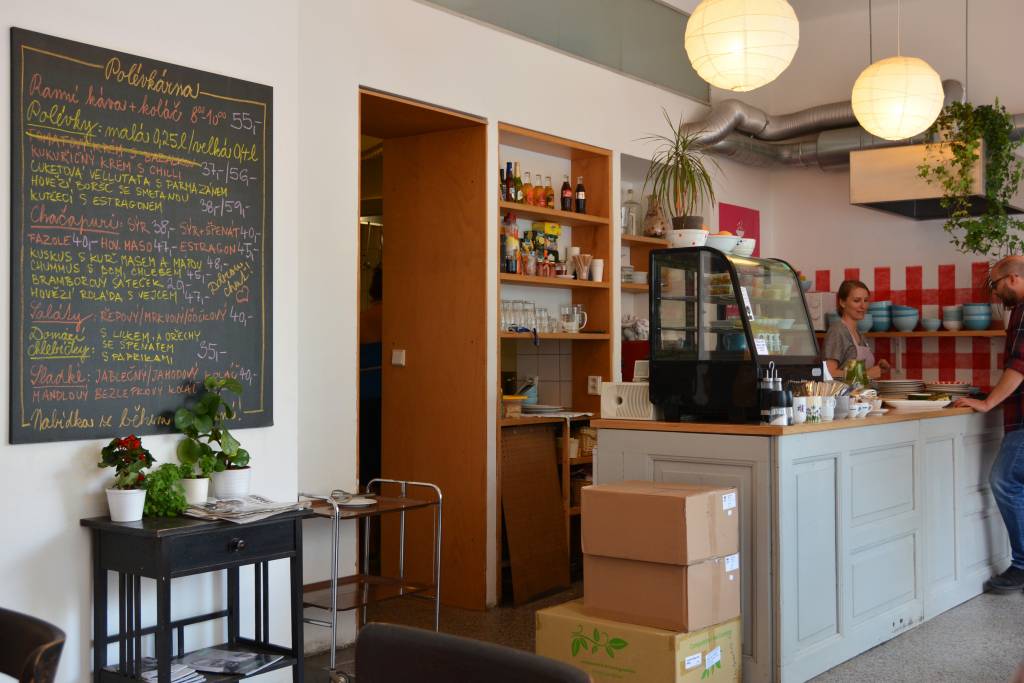 It was an unusually cool summer day in Prague, so the soup was a welcomed warm and savory treat! 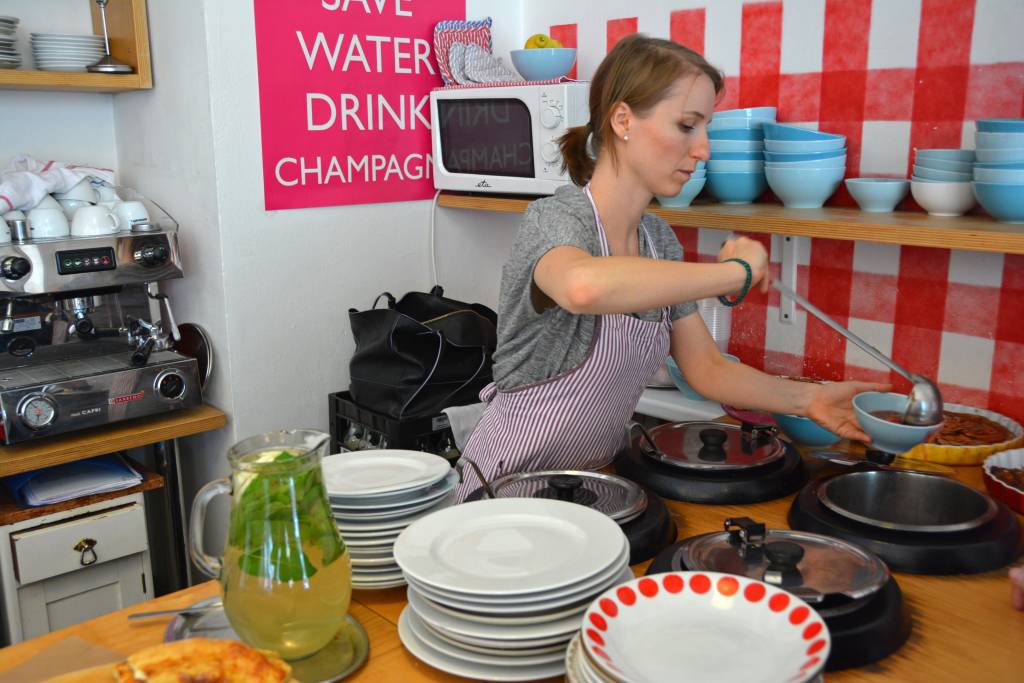 Sam ordered a beetroot-goulash soup (gulášová polévka s červenou řepou), I had the zucchini soup with parmesan (cuketová polévka s parmezánem), and Richard, our local guide, ordered a bowl of the chicken-chili soup (kuřecí čili-polévka). We also tried a scrumptious cheese chachpuri, which is a traditional treat in the country of Georgia. I’m pretty much a fan of anything warm with melted cheese. 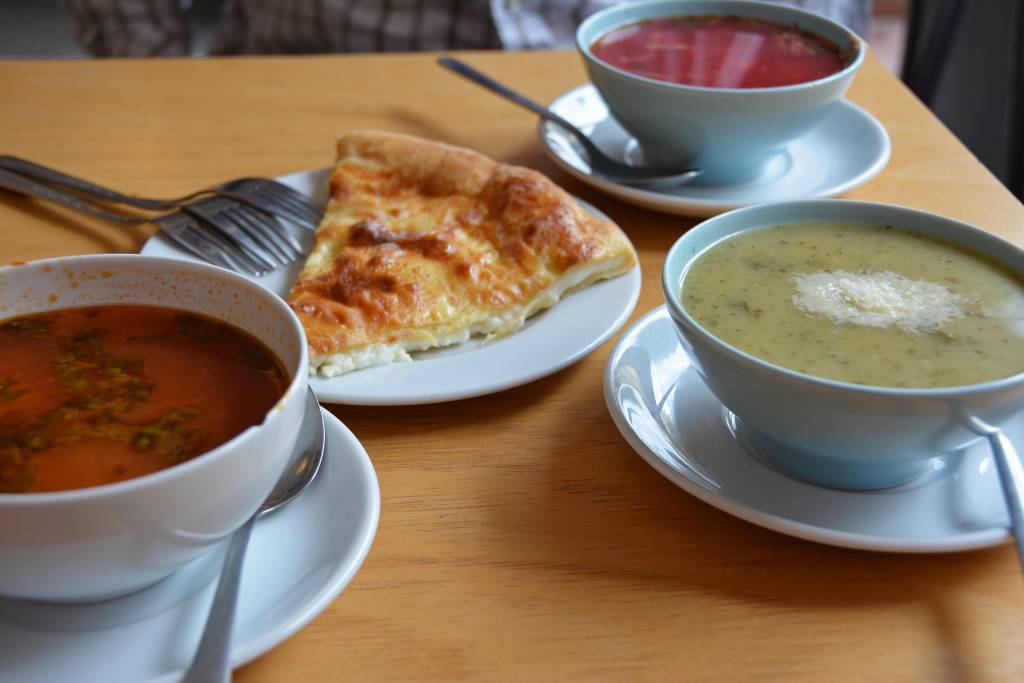 Next on the food tour was a stop at Hostinec U Tunelu, a restaurant with a chill vibe and ‘honest home cooking’, serving up meat and sausages from their smokehouse, along with pancakes, pastries, and other bread products. 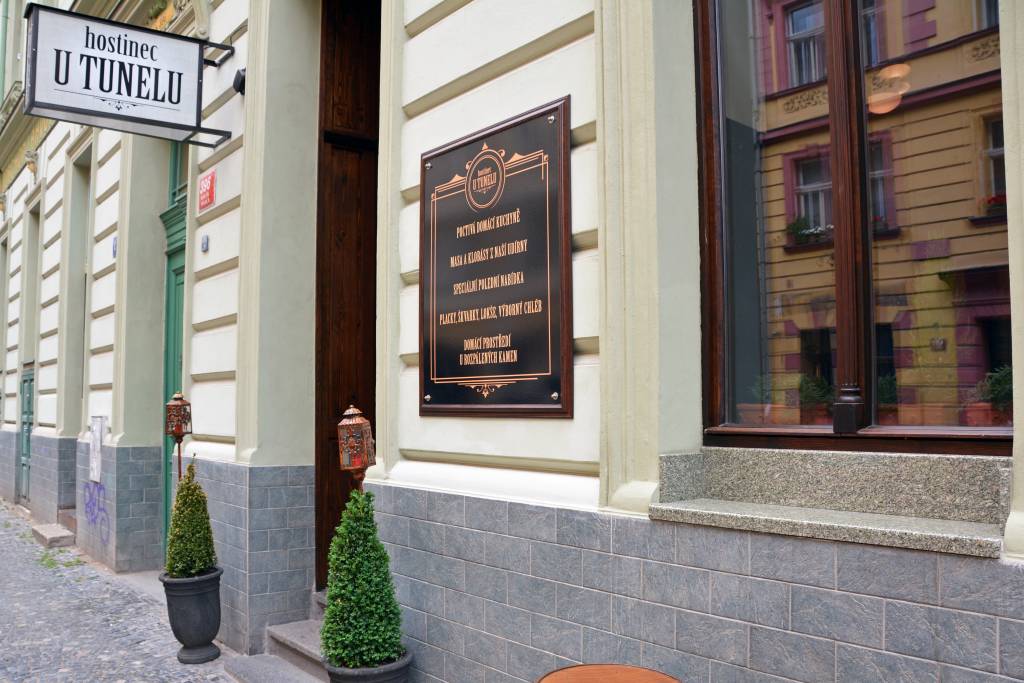 Fruit dumplings (ovocné knedliky) are a traditional Czech treat that we were eager to try. Typically filled with plums, peaches, apricots, or cherries, and covered in lots of butter and sugar, they sounded like something we could get behind. 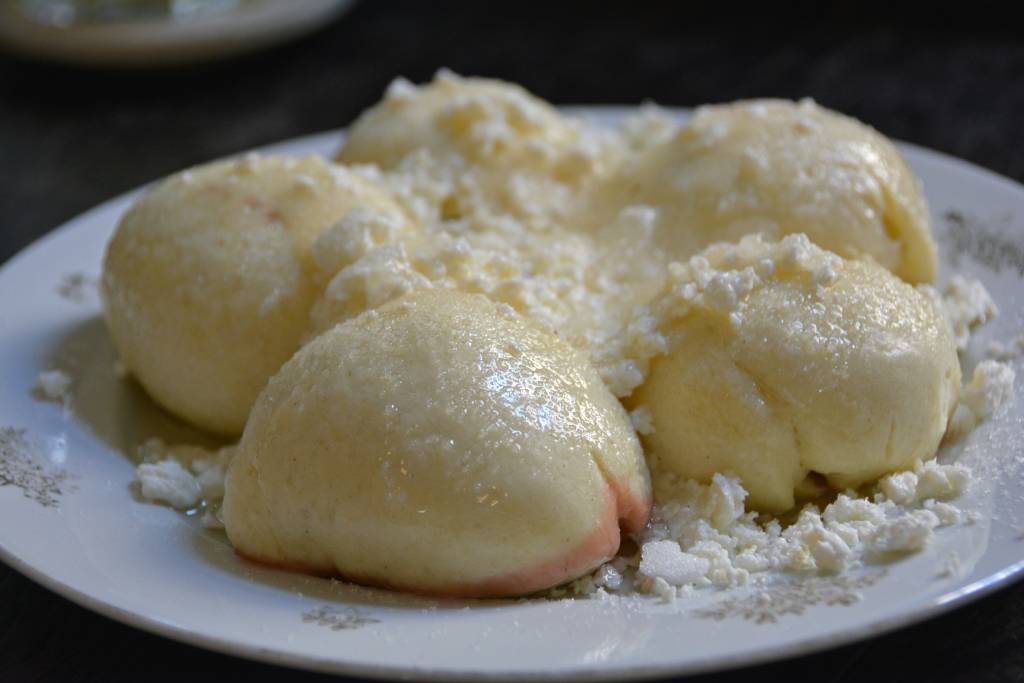 Unfortunately, we were all slightly disappointed with the dumplings served at Hostinec U Tunelu. Though they were the perfect temperature, they lacked flavor with far too few strawberries. According to our guide, the dough is supposed to be thin light and fluffy, not thick and papery, and the sugar should have been powdered.  Oh well, at least the unfiltered Konrad beer (Nefiltrovaný Konrad) was cold and delicious! 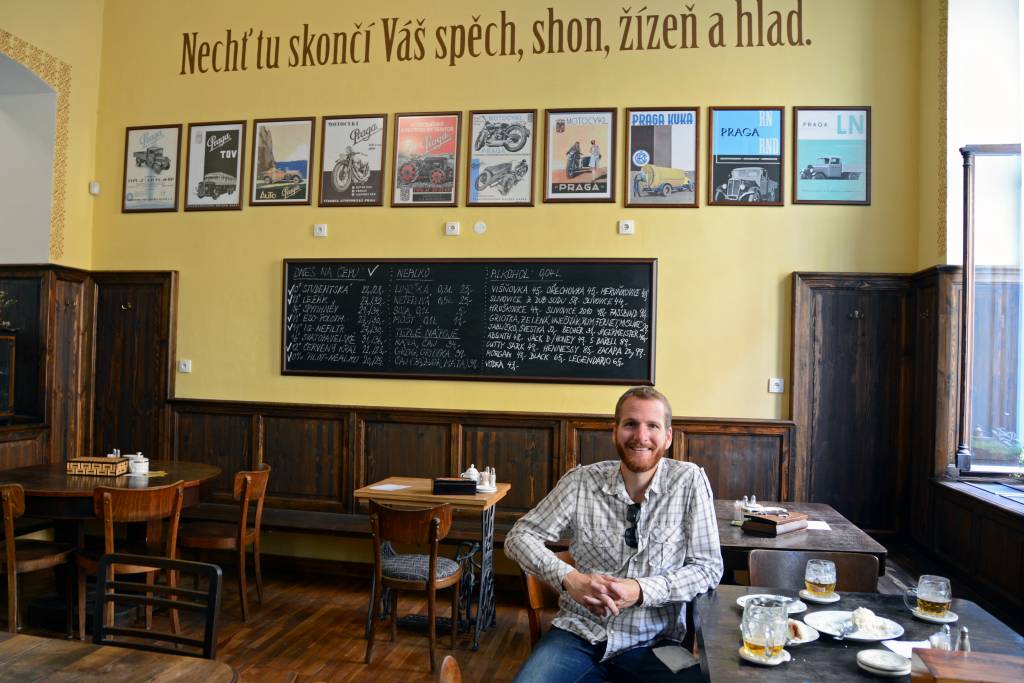 Not far from Hostinec U Tunelu is Red Hot Chilli, a Vietnamese bistro. Vietnamese folks form the largest immigrant community in the Czech Republic, so there is a fair amount of Vietnamese-inspired eateries throughout Prague. 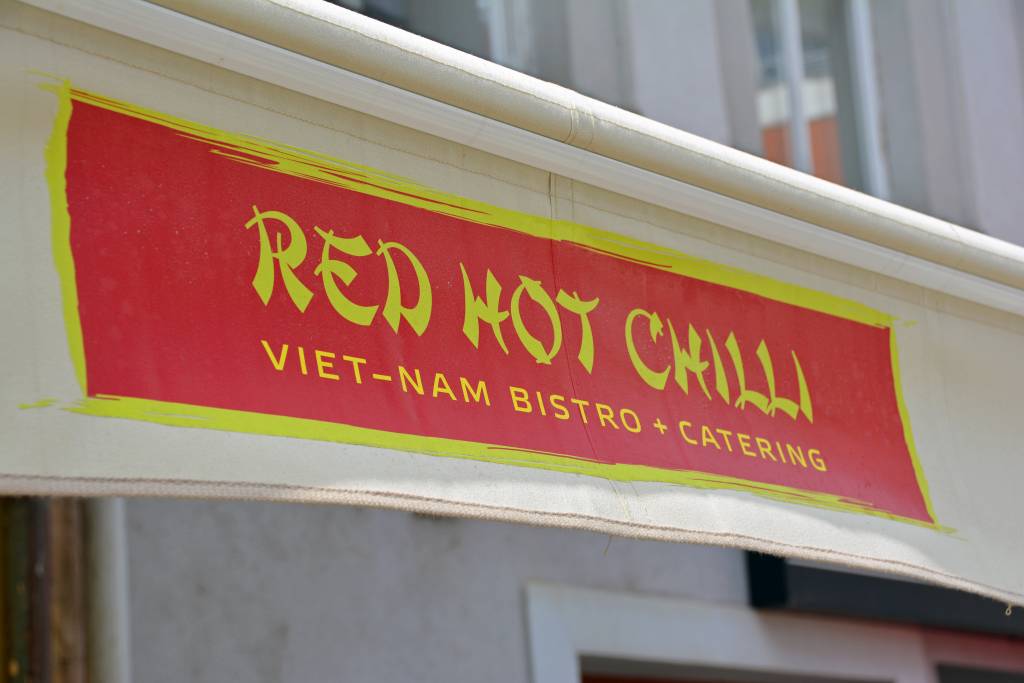 For a quick taste of this ethnic cuisine, we each sampled a vegan tofu summer roll with chili dip (vegánský letní závin a čili dip). They were rather tasty, minus the sprinkling of cilantro (coriander) included in the wrap. 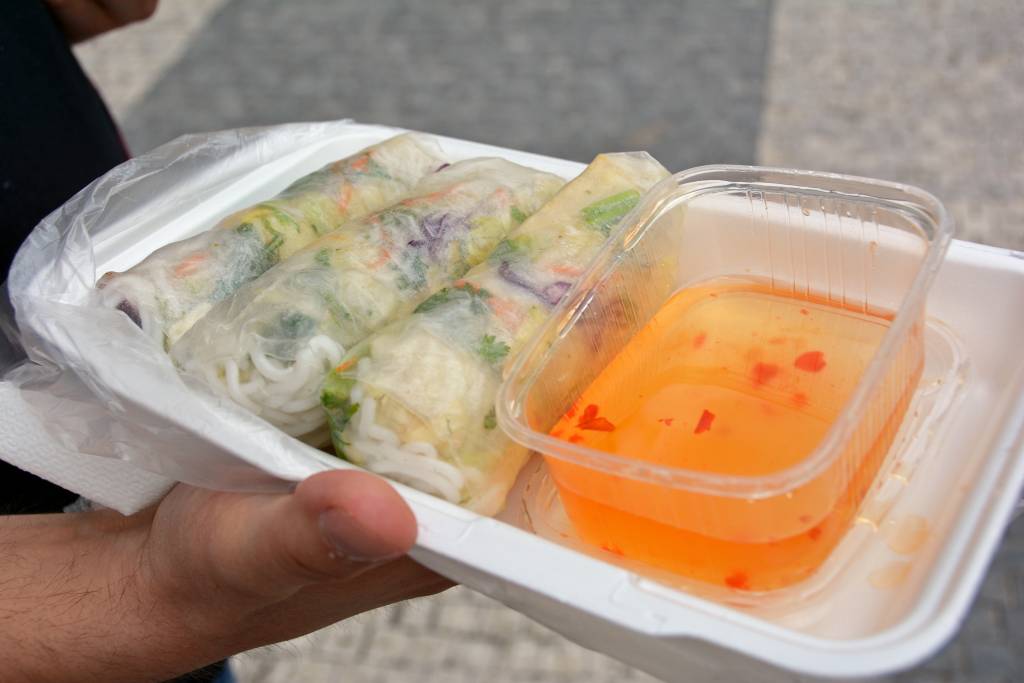 3 stops in and we were starting to get full; good thing we walked between locations, giving our food time to settle. Richard covered some of the area’s local history as we walked between restaurants, which was a great addition to the food tour. Before long we were at our second-to-last stop for the day- Hamburk Lokal. 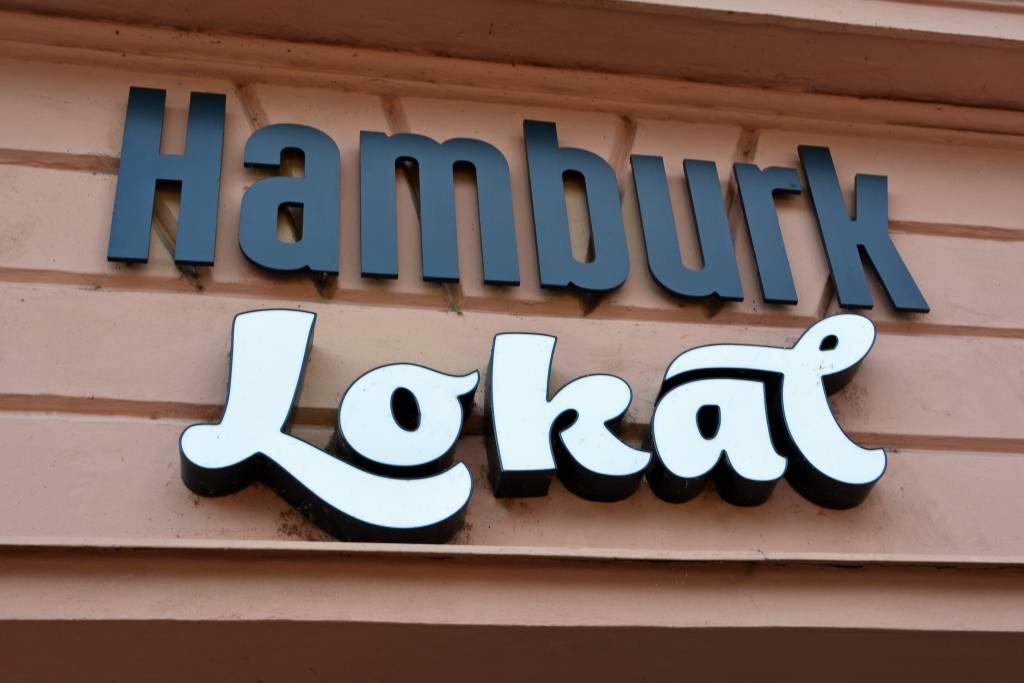 With retro décor and draft beer served straight from the tank, it provided a nostalgic atmosphere. 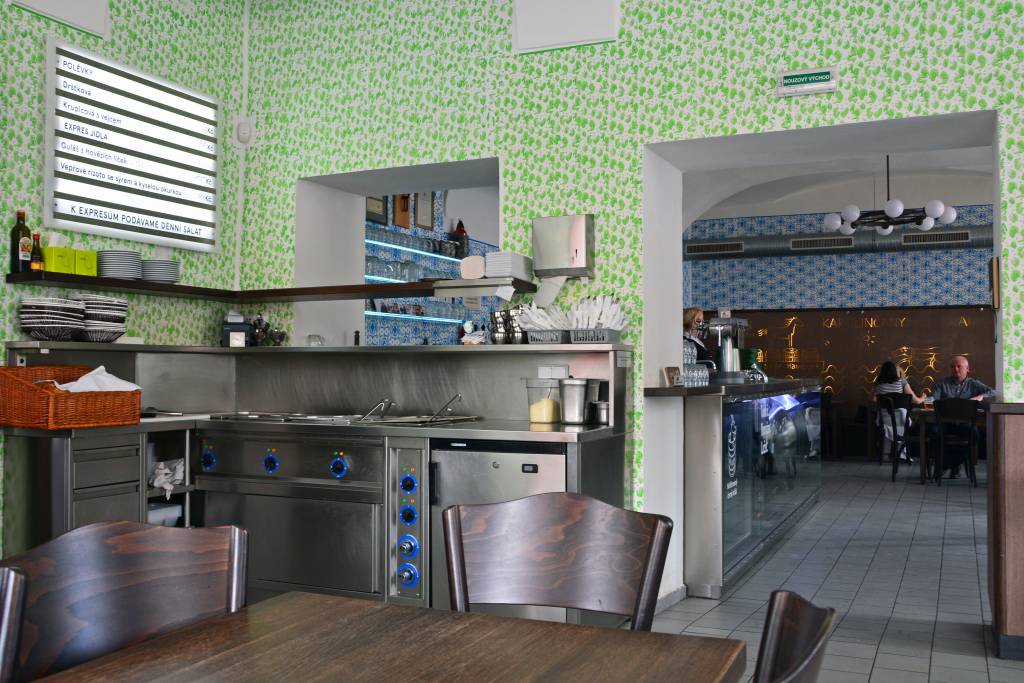 We each enjoyed yet another beer and shared one of their specialty dishes- fried edam cheese (smažený sýr) in a so-called triple batter (trojobal), served with a side of tarter sauce. Again, any kind of melted cheese dish is usually ok in my book and this was certainly no exception! 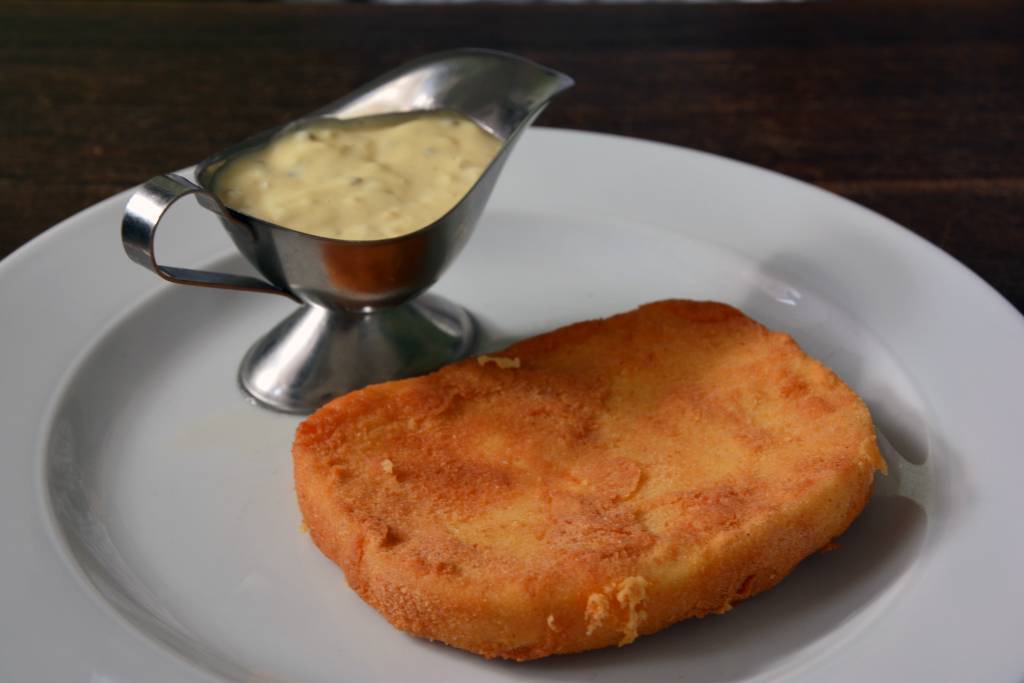 Our final stop of the day was Mamacoffee, a place well-known among the locals, and for good reason. With pastries and coffee options galore, it was the perfect end to our eclectic food tour. 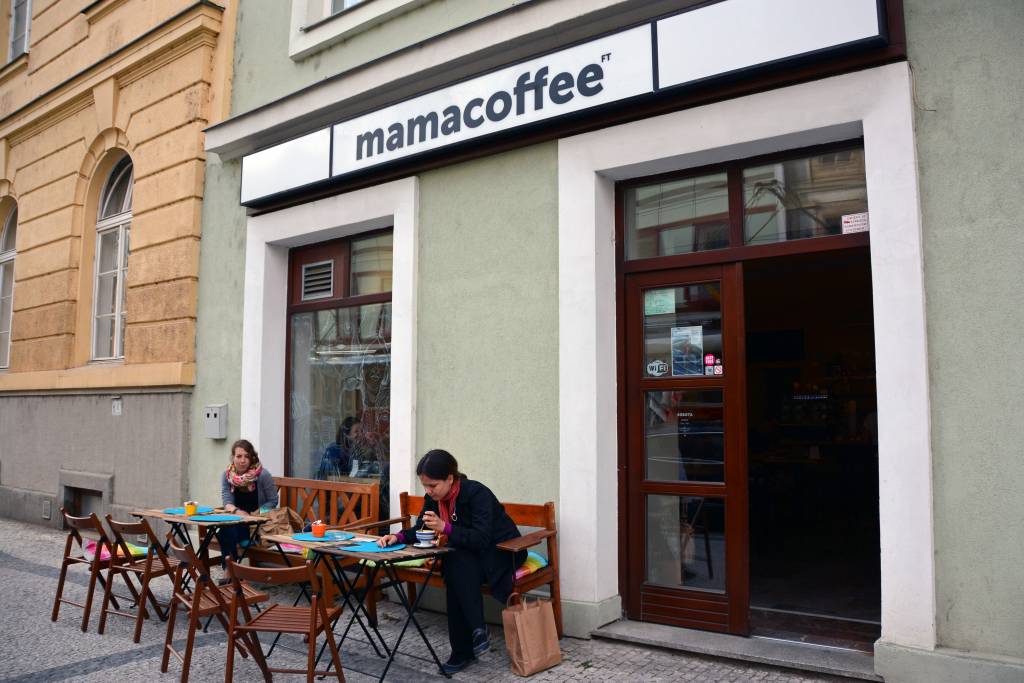 Though we were pretty stuffed at this point, we sampled a few bites of a poppy seed pie. Not being a huge fan of poppy seed (I’m picky, I know), I didn’t love it, but again this simply could’ve been due to the fact that I was so full! Though, magically I found some room in my overindulged stomach for a deliciously thick hot chocolate flavored with fresh raspberries. I don’t drink coffee, so I’m constantly on the hunt for good hot chocolate. In fact, I put together another post highlighting a few other places in Prague for yummy hot chocolate, if you’re interested! 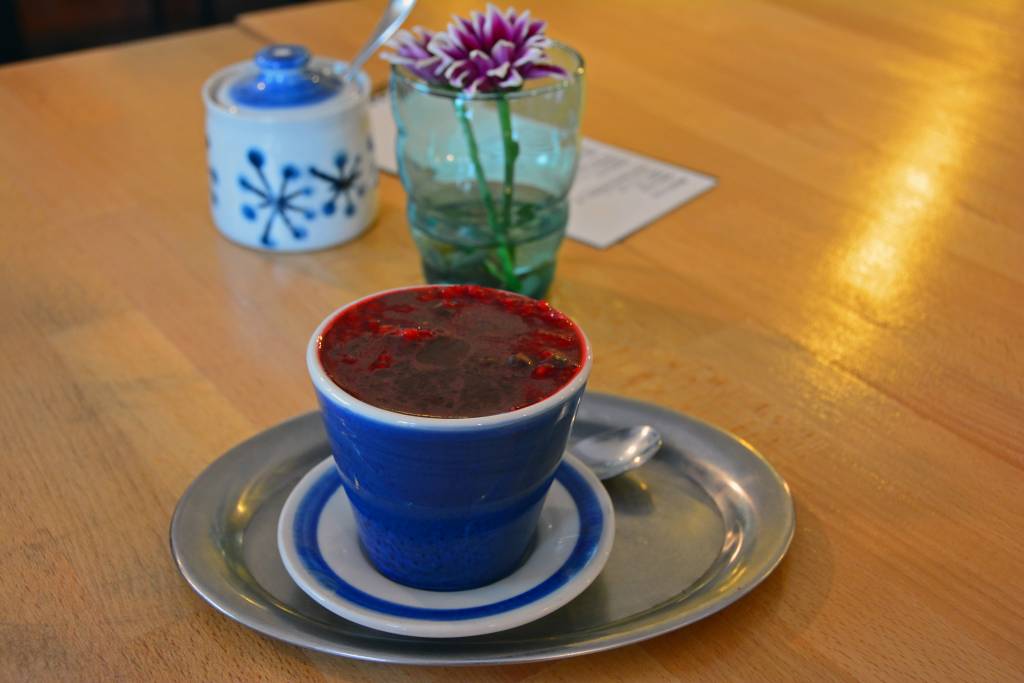 So, that was our personalized food tour, organized by JayWay Travel. But, since we’re talking food, we feel obliged to point out a few other places in Prague where we enjoyed delectable dishes! Oh, and if you’re interested in reading about where to get some amazing beer throughout the city, check out this post.

Můj šálek kávy, an urban cafe also located in the Karlin neighborhood, is THE place to go for breakfast… and coffee! 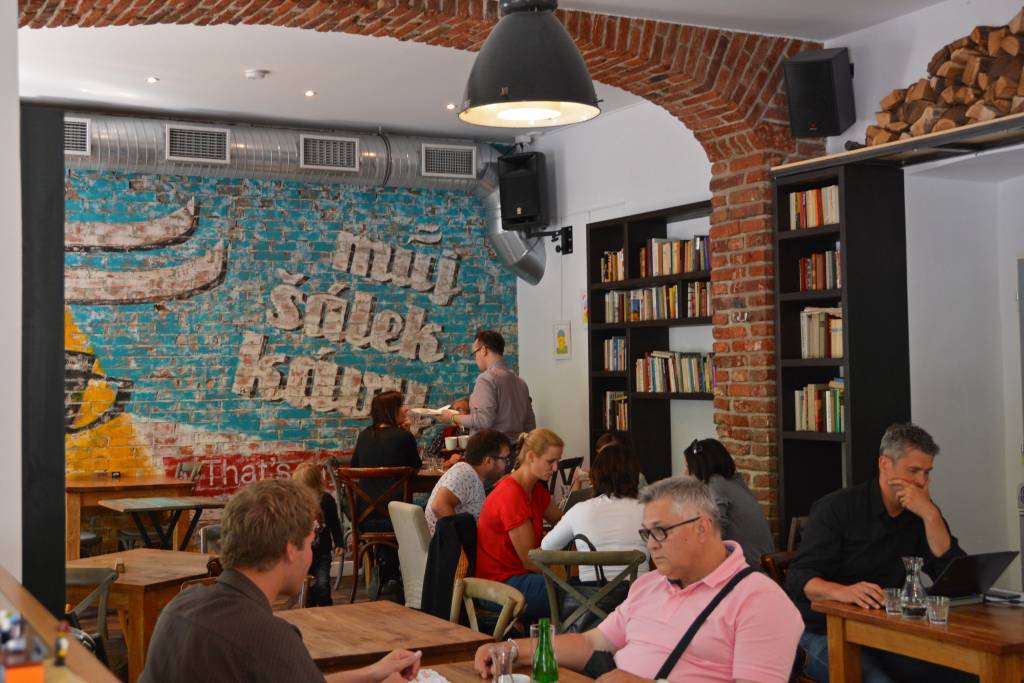 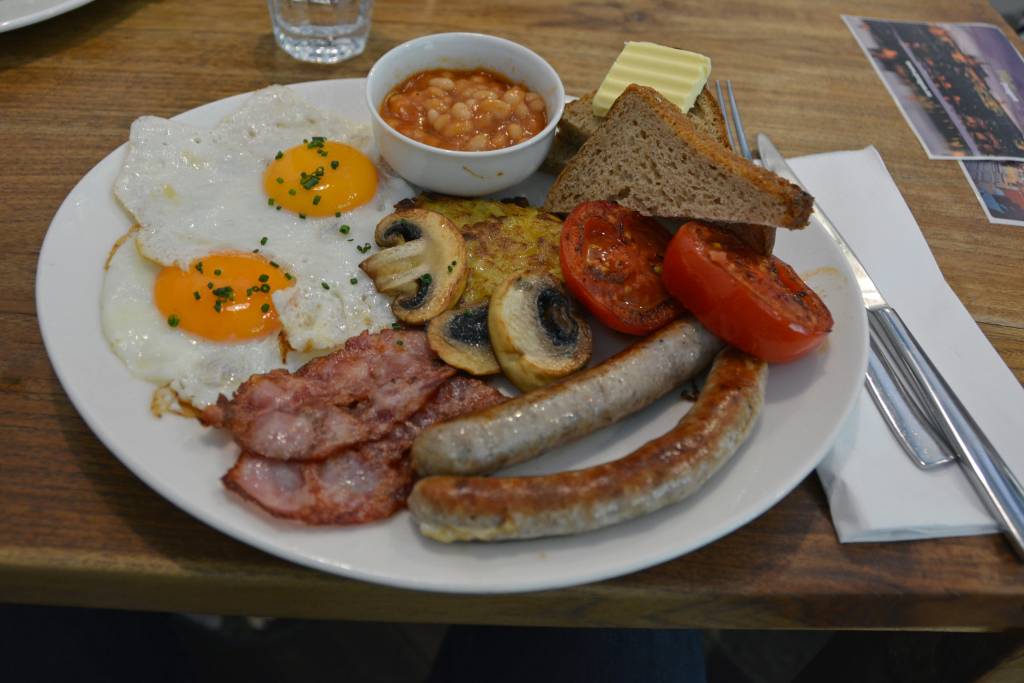 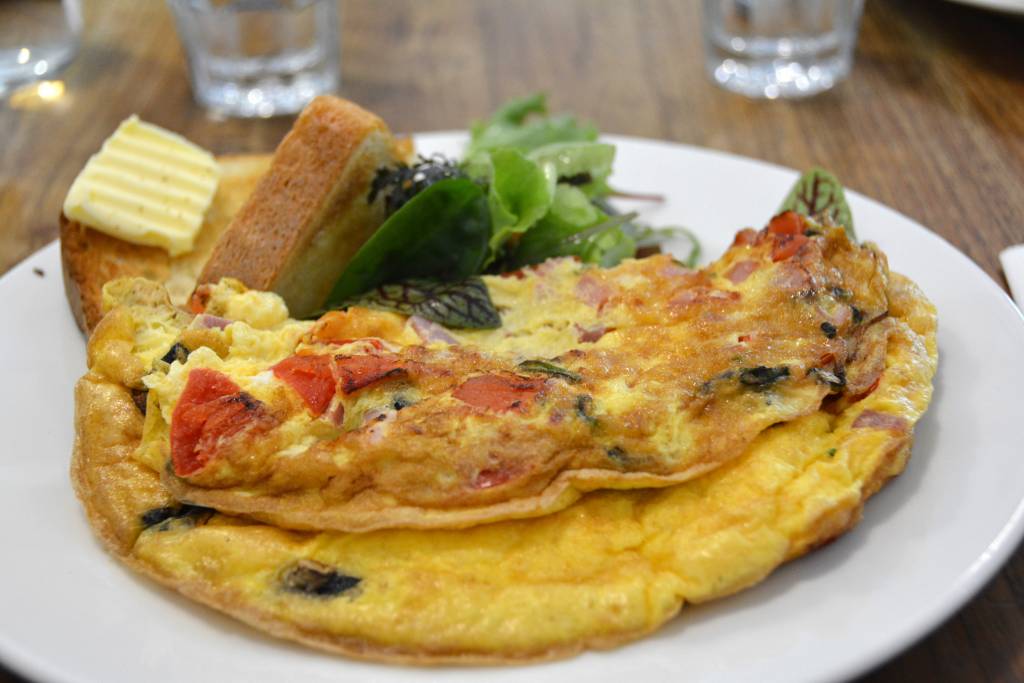 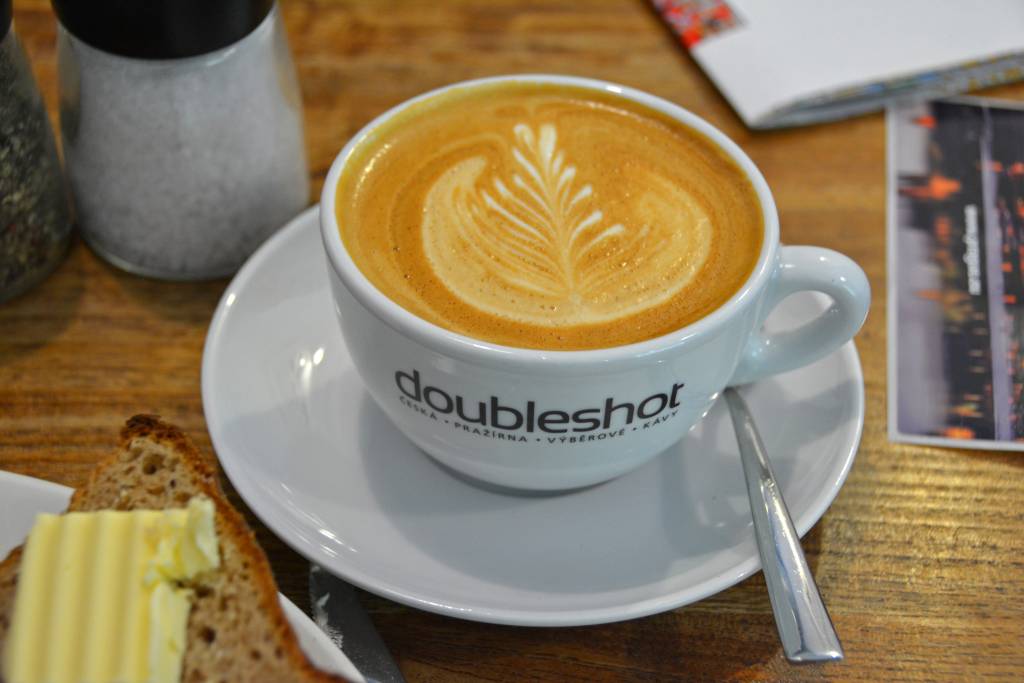 The Charleston is a funky restaurant decked out in cushy sofas, armchairs, and flare creating a 1930’s vibe. With almost nightly live piano music, it’s a nice place to grab a hearty portion of homemade goodness at an affordable price. Any guesses where it’s located? Oh yes, it’s also located in the Karlin neighborhood (can you guess where we stayed during our week in Prague?). 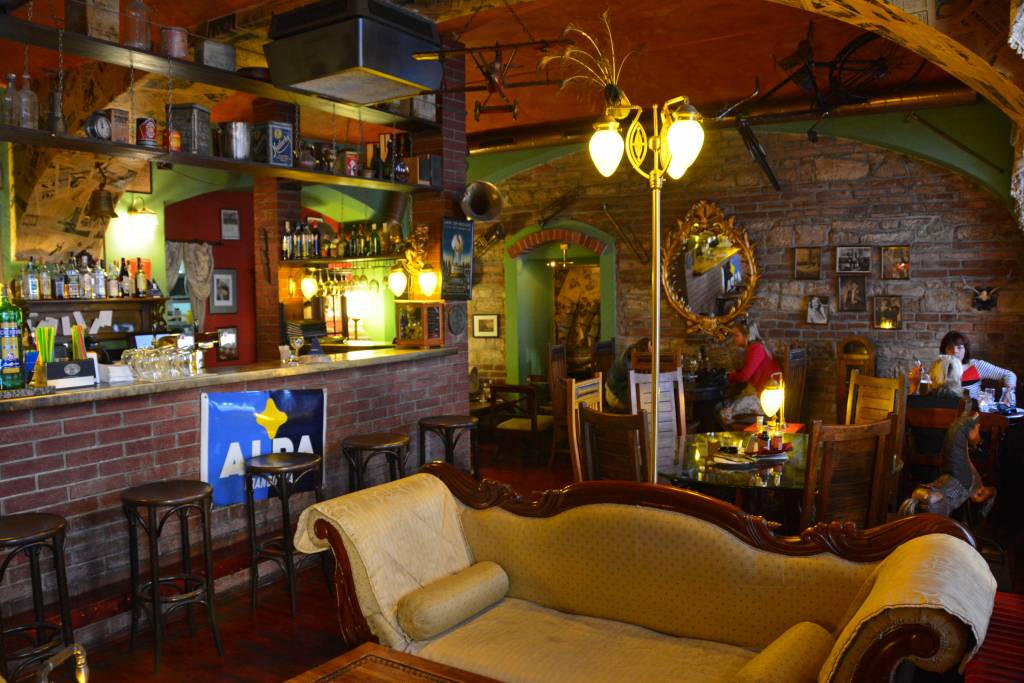 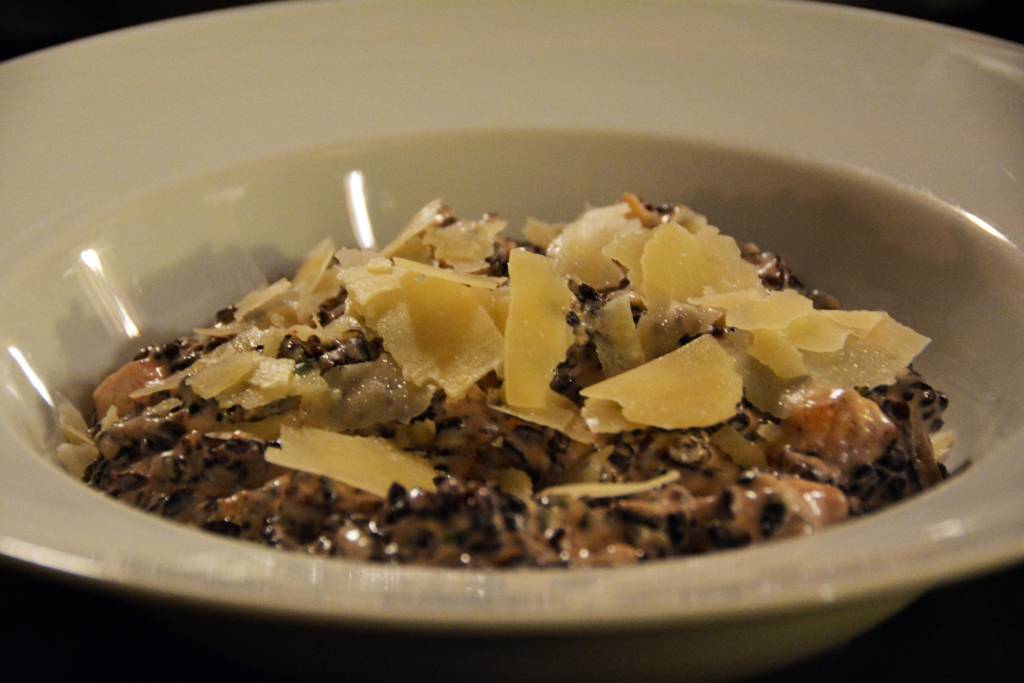 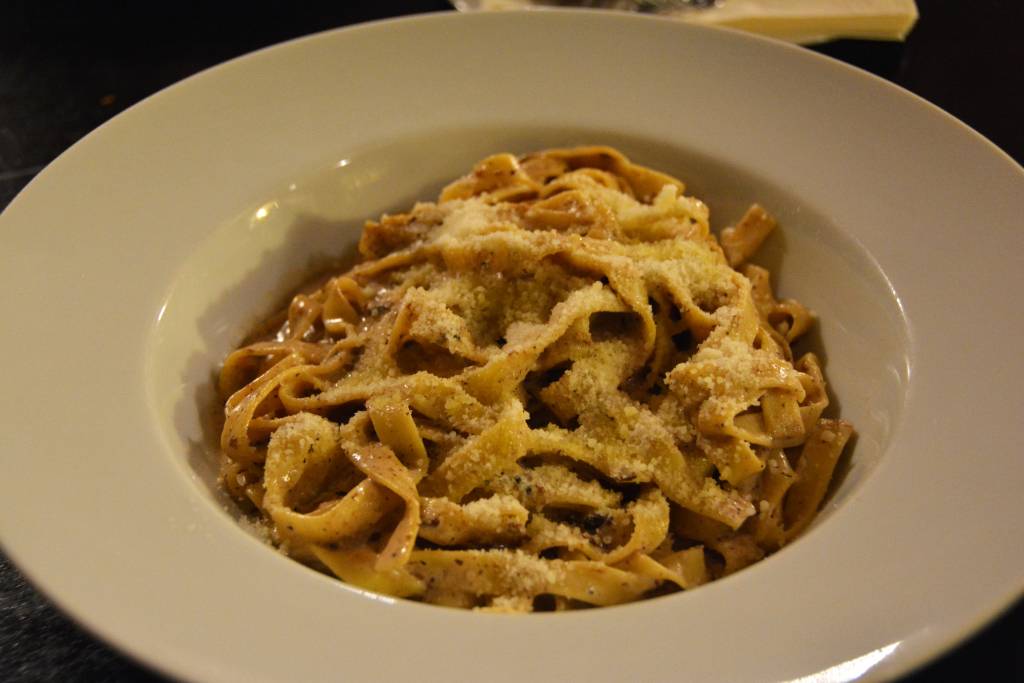 Ready to venture out of Karlin, but not quite central Prague? Head to Nota Bene in Prague 2. It might be out of the way for some travelers, as it was for us, but the food was outstanding! With a somewhat limited daily menu, we were both able to find entrees that completely satisfied. I had to ask about a vegetarian option as none were listed on the menu, but man, was a I blown away by the flavorful vegetarian lasagna, while Sam devoured every savory bit of his wild boar leg entree. 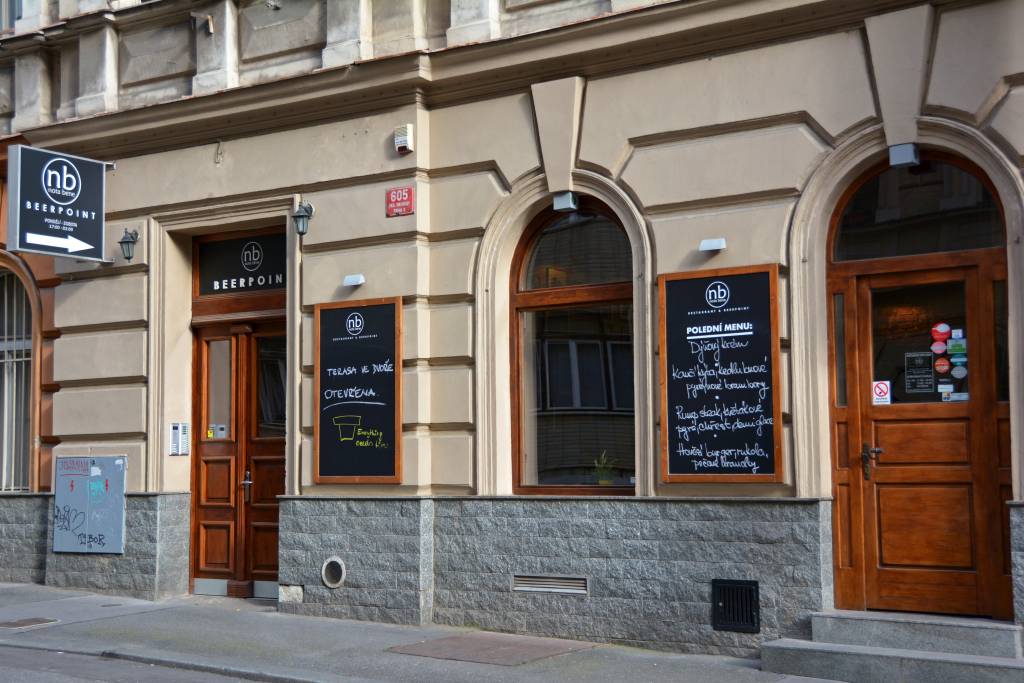 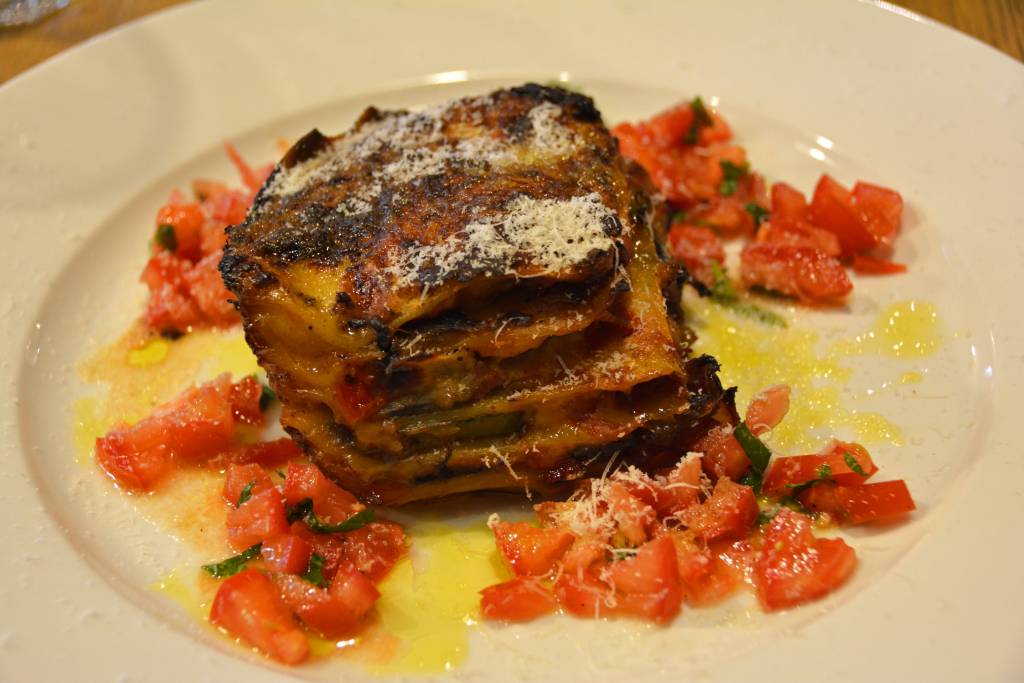 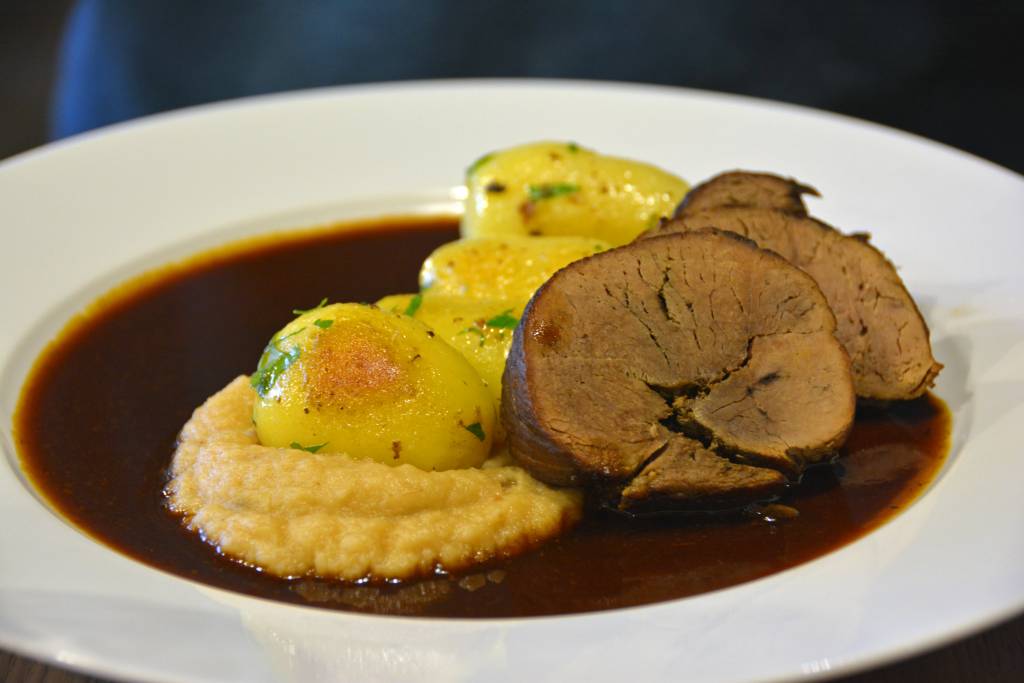 And last, but certainly not least, Na Hradbach, located in the Vysehard Beer Garden, provides hungry beer drinkers with fresh-off-the-grill meats and veggies at a reasonable price. We couldn’t get enough of this grilled goodness and recommend that you give it a try next time you find yourself in Prague. 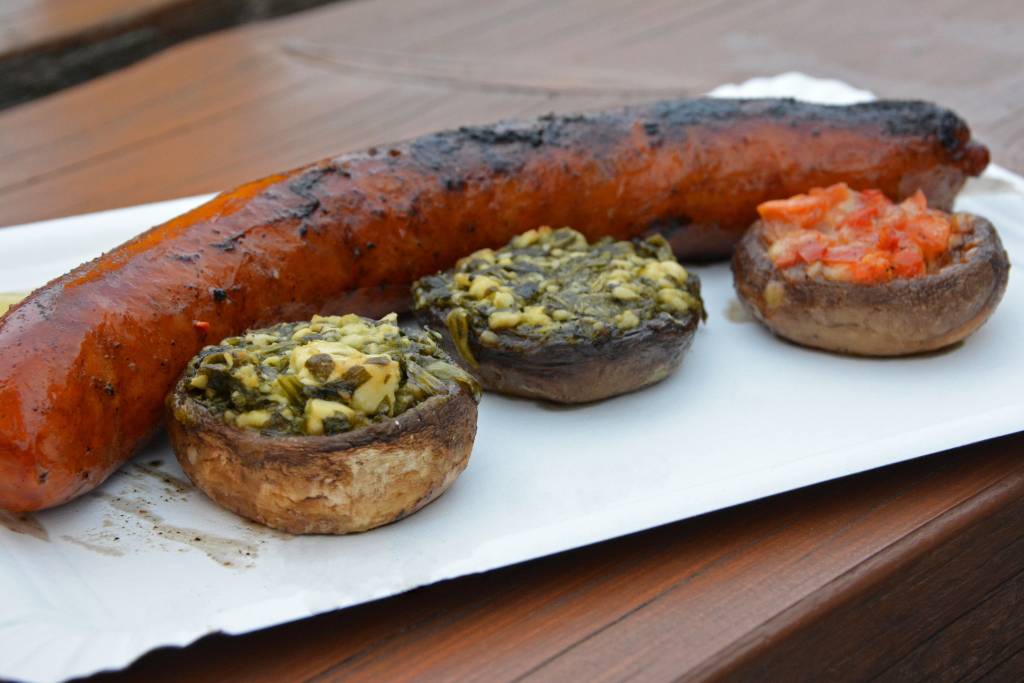 Hopefully you’ve enjoyed this virtual food tour through the Czech Republic’s capital city. With only one week in Prague, we obviously didn’t get a chance to visit many of the over 4,000 eating establishments. We were satisfied with the fact that we were able to sample many of the Czech Republic’s traditional dishes and look forward to our next visit when we plan to indulge in even more Czech cuisine!

Check out our intro to Prague video below!

A special thanks to JayWay Travel for hosting us in Prague and for creating a personalized food tour with a friendly local.