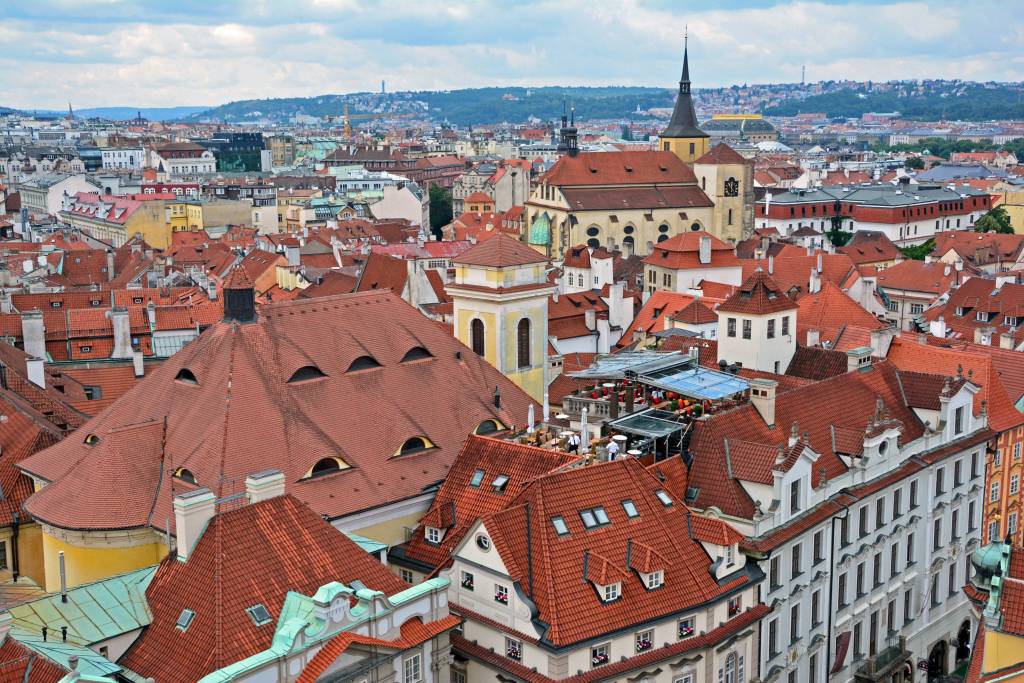 Prague is a fascinating and stunning city with spectacular views everywhere you look. During our week in the Czech Republic’s capital city, we came across several locations and attractions which provided incredible views of Prague!

Letná Beer Garden is located inside Letná Park (Letenské Sady), a large city park which runs alongside the bank of the Vltava River. The beer garden is not only a chill place to hang out and drink some delicious Czech beer on a warm summer’s eve, but it’s also a great location for watching the sun set over Old Town (Staré Město). 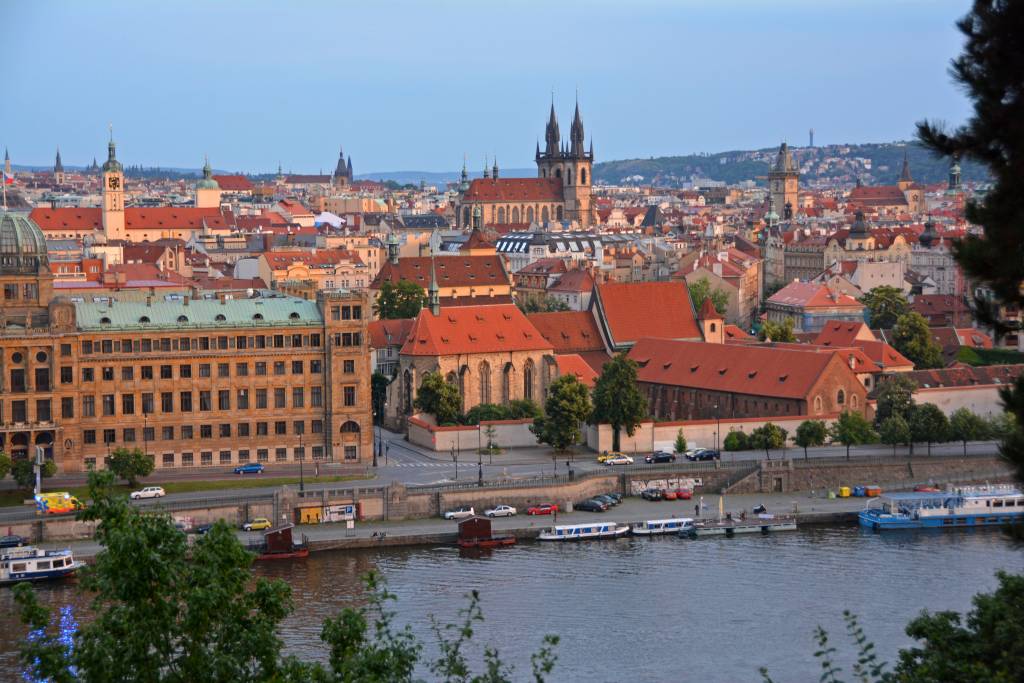 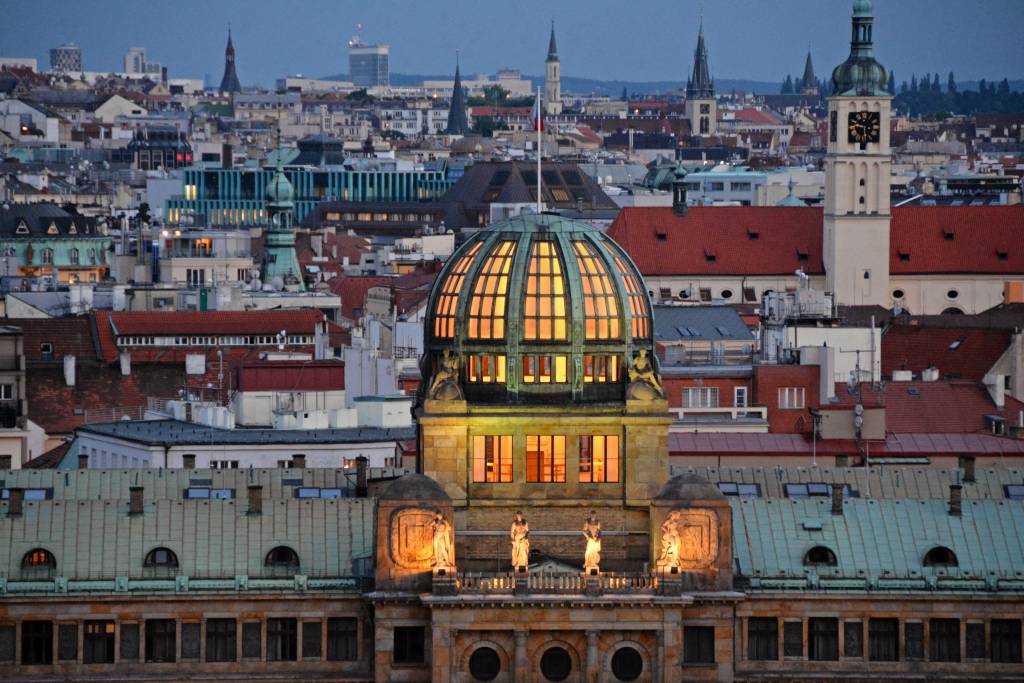 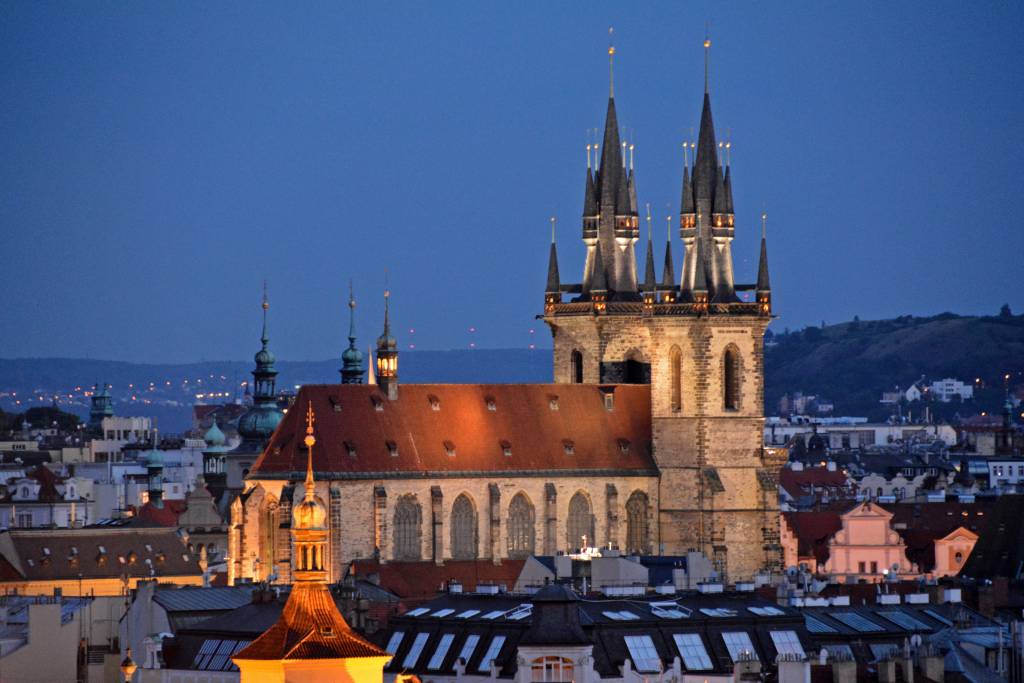 The closest tram stops to the Letná Beer Garden are Letenské Náměstí or Strossmayerovo Náměstí.

Built as a smaller version of the Eiffel Tower in Paris (1/5 the size of the original), the Observation Tower atop Petrin Hill offers magnificent 360-degree Prague views. The tower is only 196 ft (60m) tall, which doesn’t sound substantial until you consider that it is sitting at the summit of Petrin Hill, which is 1043 feet (318m) high. 299 stairs will take you to the observation deck for a small fee. (There is an elevator available for an additional charge.) On a clear day it is possible to see Snezka, the Czech Republic’s highest peak, 93 miles (150km) away. 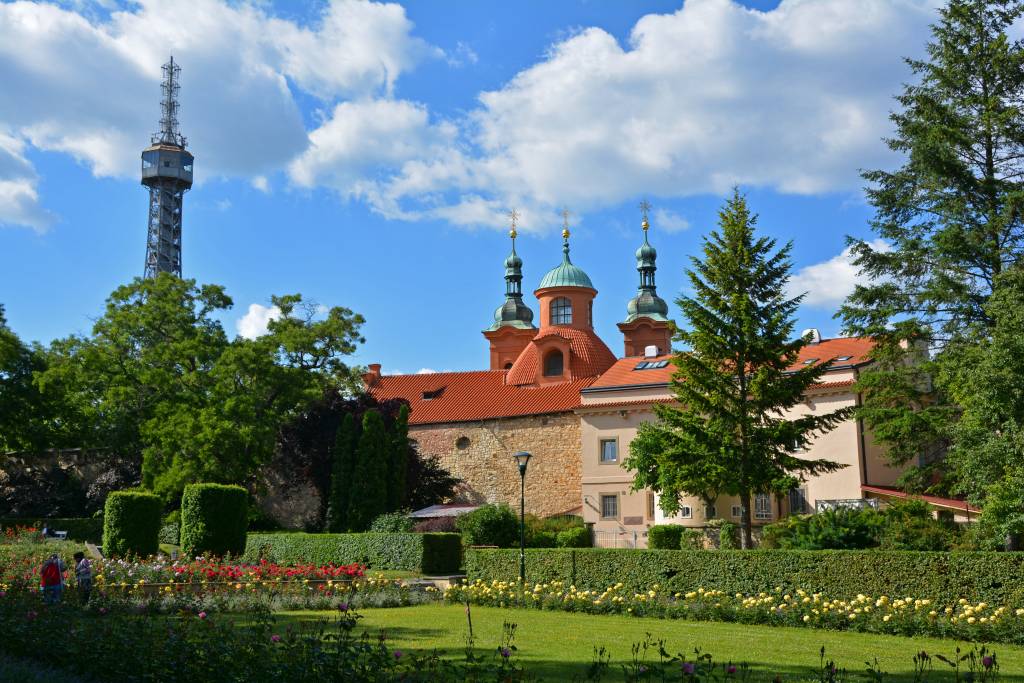 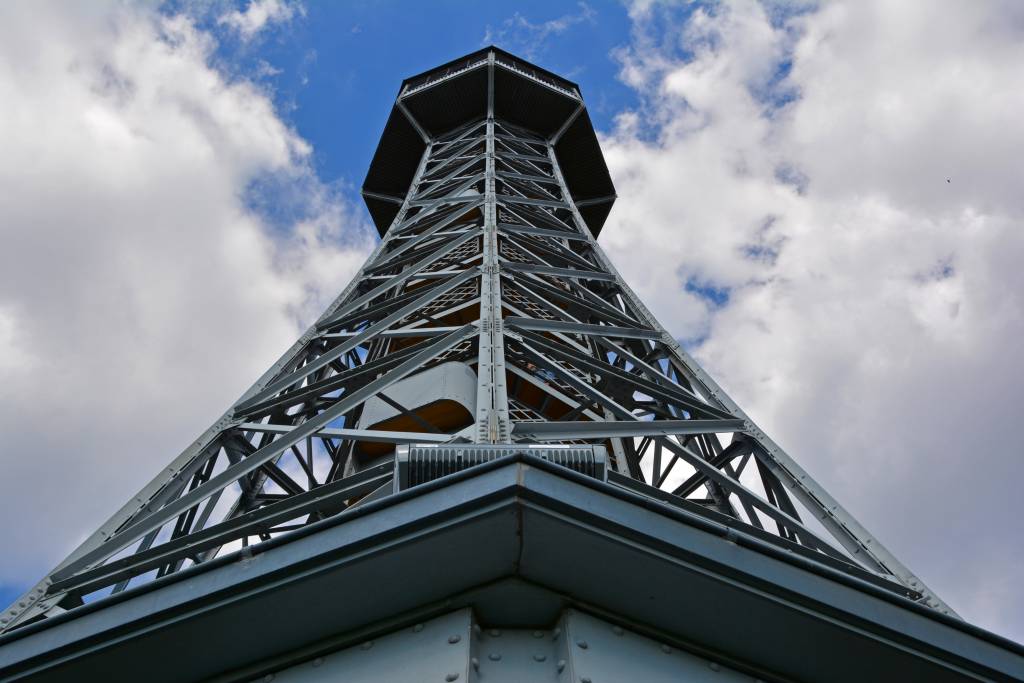 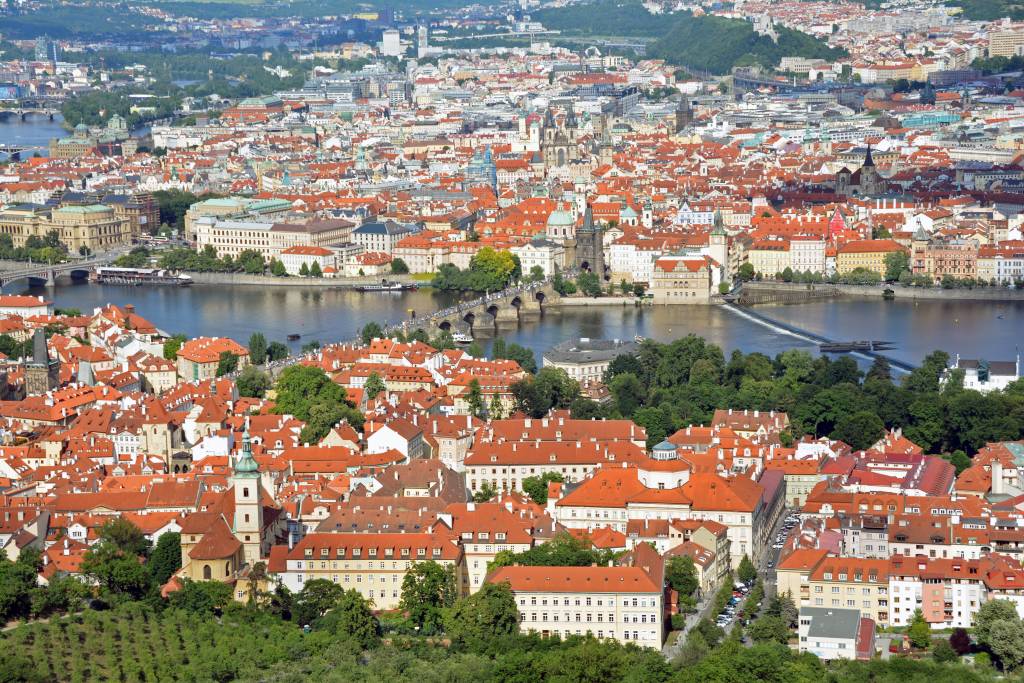 To reach the Observation Tower and other attractions at the top of Petrin Hill, take the Funicular Railway, located in Lesser Town (Malá Strana). You can make the fairly steep hike up the hill, which will take approximately 30 minutes. The closest tram stop is Ujezd.

Prague Castle (Pražský Hrad) is itself an iconic image in the city’s skyline. However, it also offers some of the best views in Prague. There are several ways to reach the castle, meaning there are also several vantage points. The most popular route takes you through the Malá Strana part of town and up Zámecké schody (the castle stairs). During your visit to Prague, be sure to take a guided castle tour and visit St. Vitus Cathedral, St. George’s Basilica, and Golden Lane. 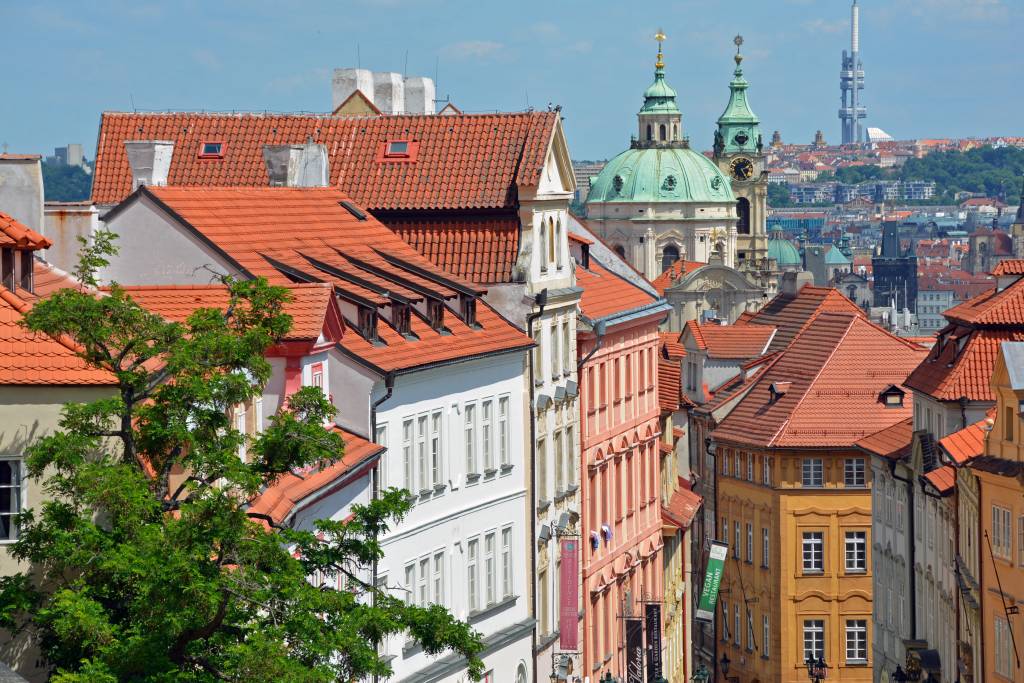 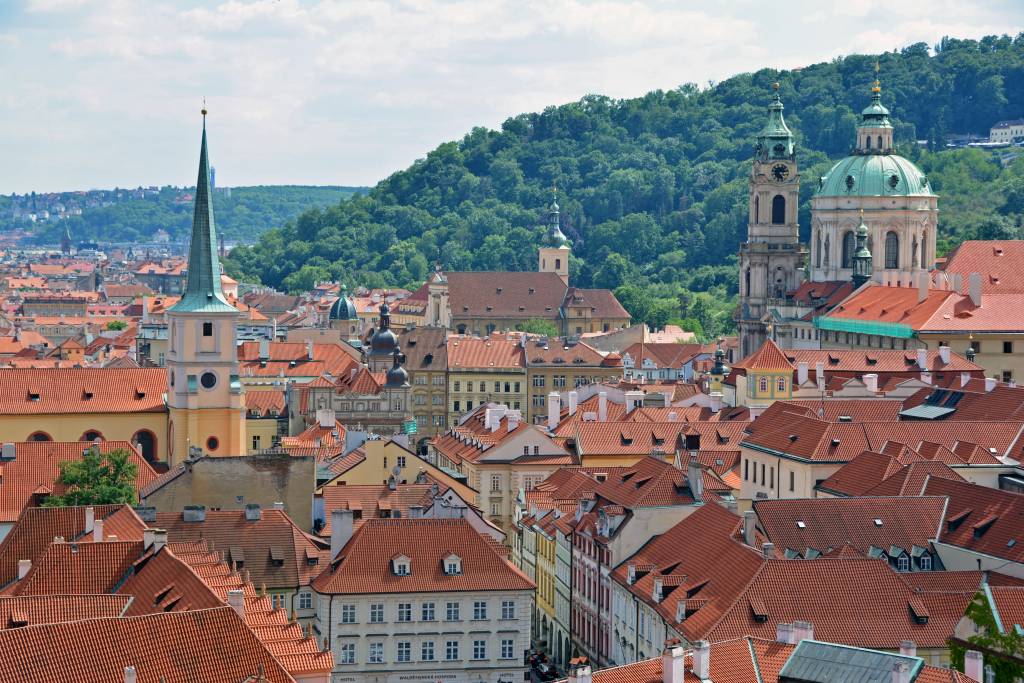 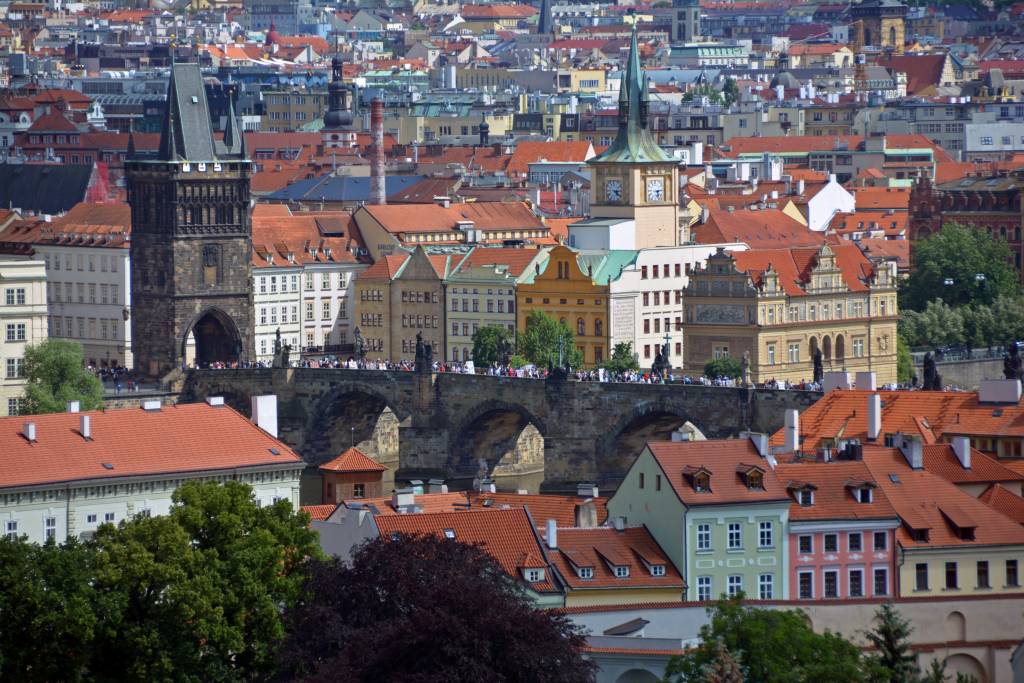 As mentioned, there are several ways to get to Prague Castle. The easiest is to get off at the Pražský hrad tram stop. If you want the city view near the stairs (pictured above), take the tram to the Malostranské náměstí stop.

Officially The Royal Canonry of Premonstratensians at Strahov, the Strahov Monastery (Strahovský klášter) is one of the oldest Premonstratensian monasteries still in existence in the world and is located not too far from Prague Castle. Strahov not only offers great views of the city, but it is one of the BEST places in town for beer, so be sure to stop by the brewery (Klasterni Pivovar). 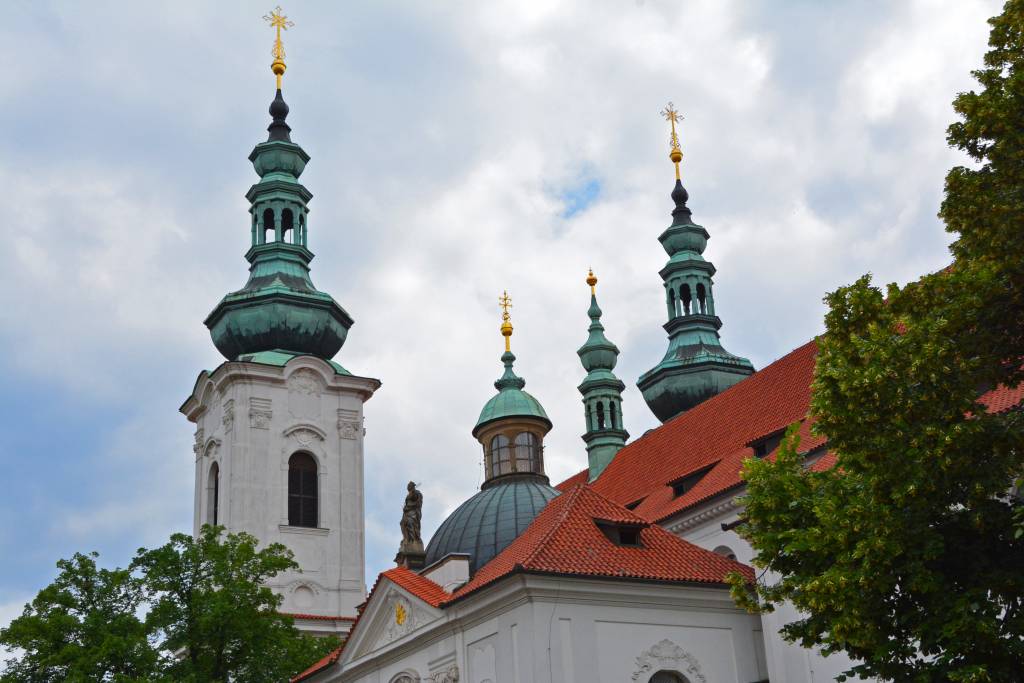 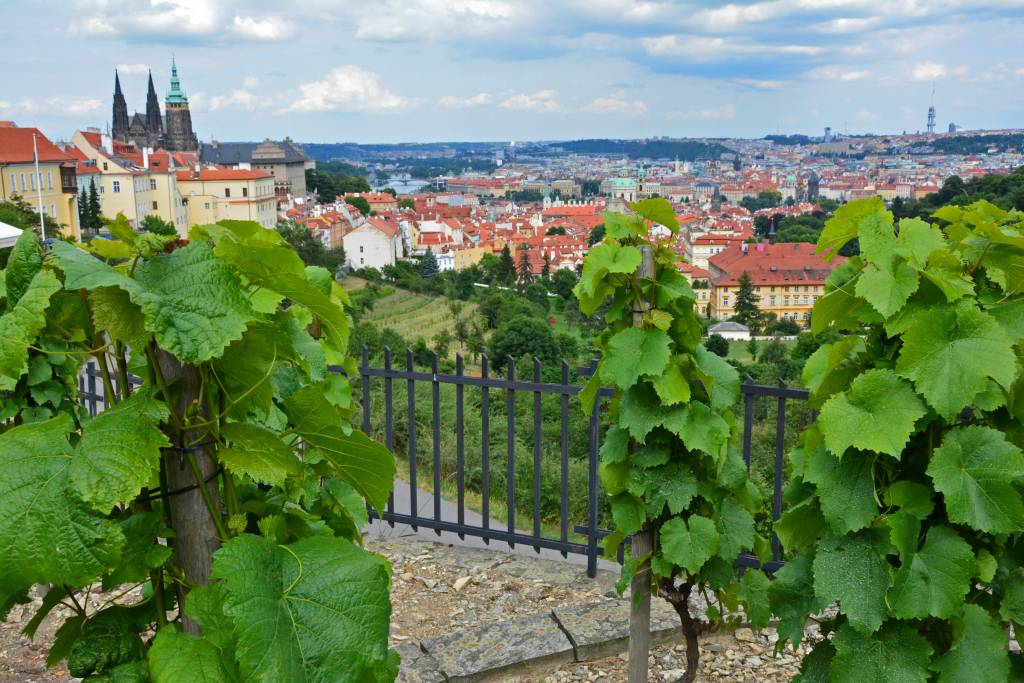 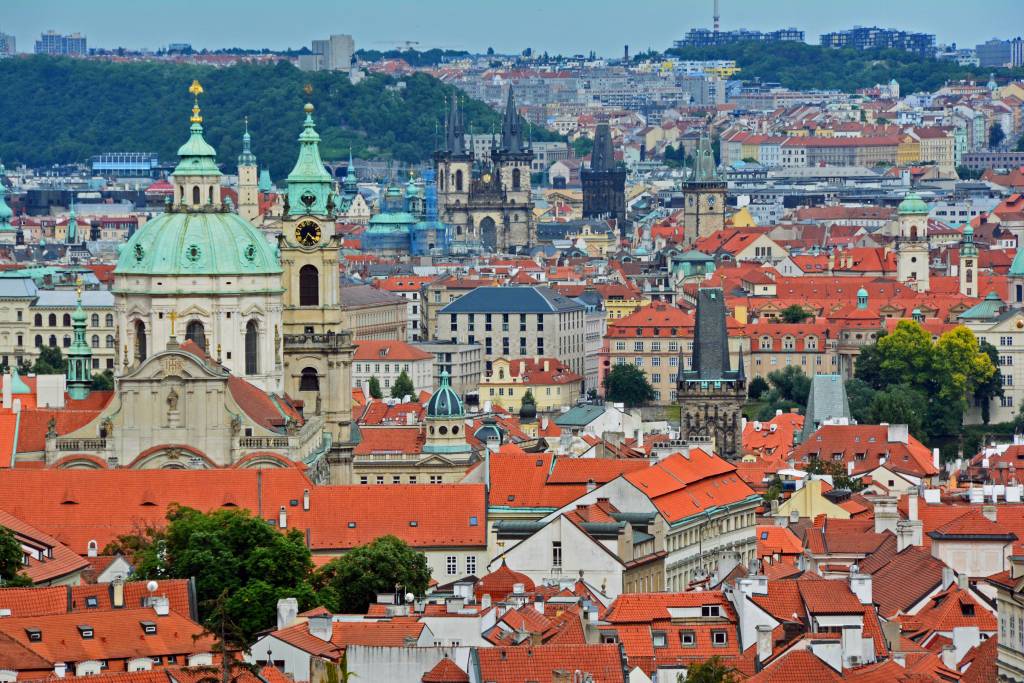 Pohorelec is the closest tram stop to the monastery. If you’re coming from Petrin Hill (location of the observation tower mentioned earlier), you can also hike down along Strahovska street for about 10 minutes until you arrive at the monastery.

It’s pretty much impossible to go to Prague and not visit the Old Town Square. Among many other attractions, you will see the world famous Astrological Clock built into the Old Town Hall Tower. We strongly recommend you pay the small fee to go up the tower, as the views are incredible looking down into the square and over all of Prague. In fact, we would argue that the tower offers THE best view in Prague! For great views of the city center at ground level, consider a 2-hour bus tour on a panoramic, open-top bus. 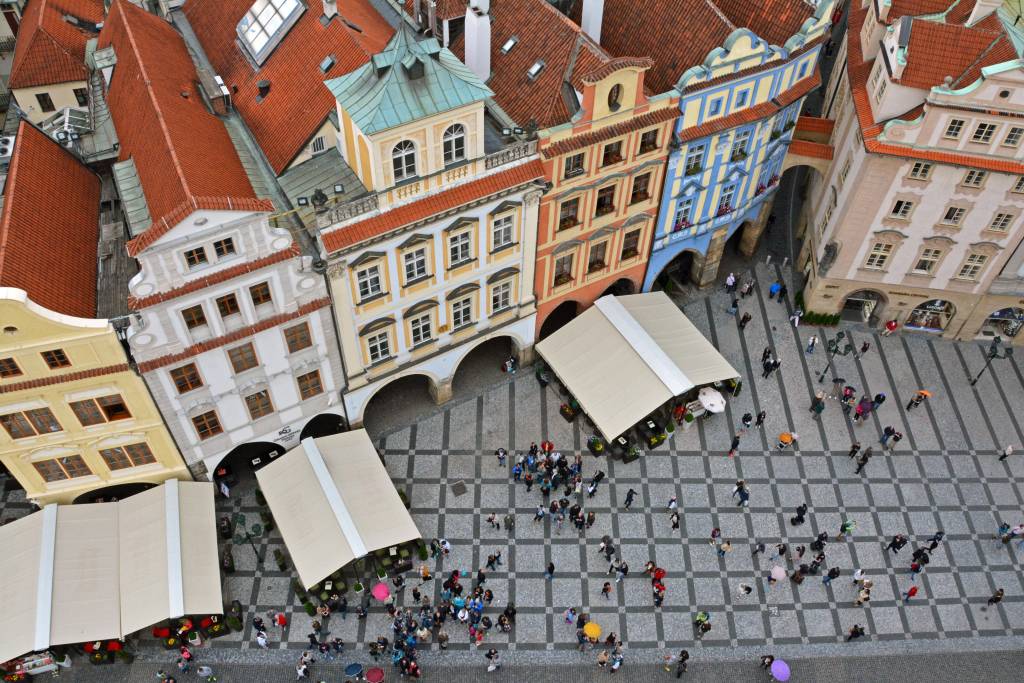 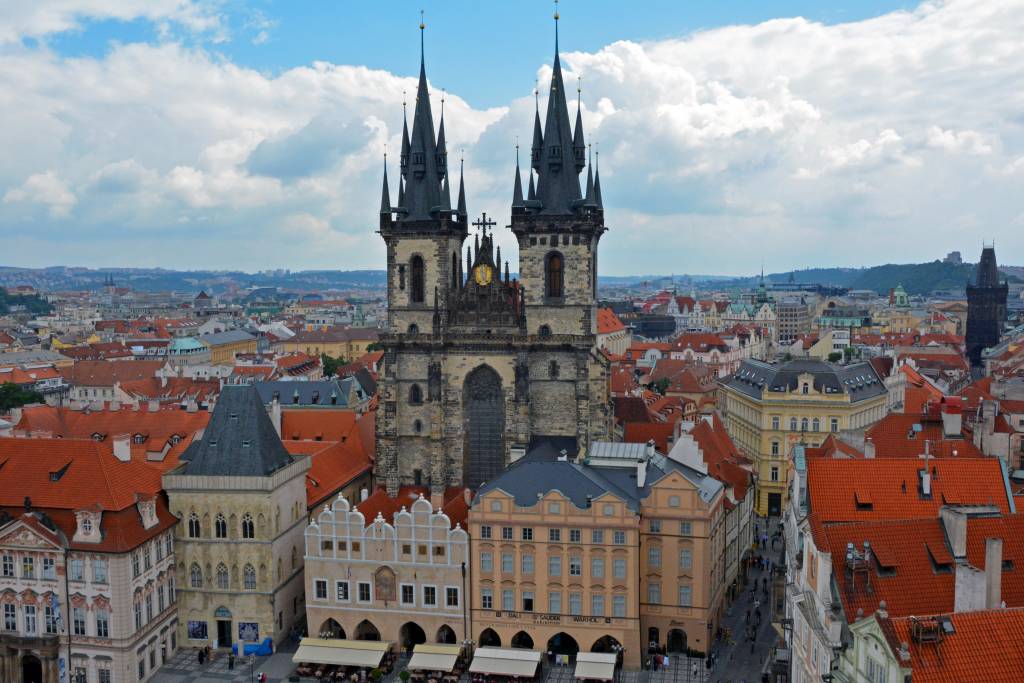 Staromestska is the closest tram (and metro) stop to Old Town Square and the Old Town Hall Tower.

Charles Bridge (Karlův Most) is another one of Prague’s most popular attractions. This 14th century stone bridge is located in the heart of the city and connects Old Town with Lesser Town. Barred with majestic towers on each end, the entire length of the bridge provides visitors with spectacular views of Prague Castle, Old Town, and up and down the Vlatava River. Expect crowds to be present during your visit to the bridge and don’t forget to visit at sunset for some truly memorable views of Prague. If you’re looking for a truly spooky experience in the “City of a Hundred Spires”, join in on a ghost tour once the sun goes down for memorable tales of this enchanting city. 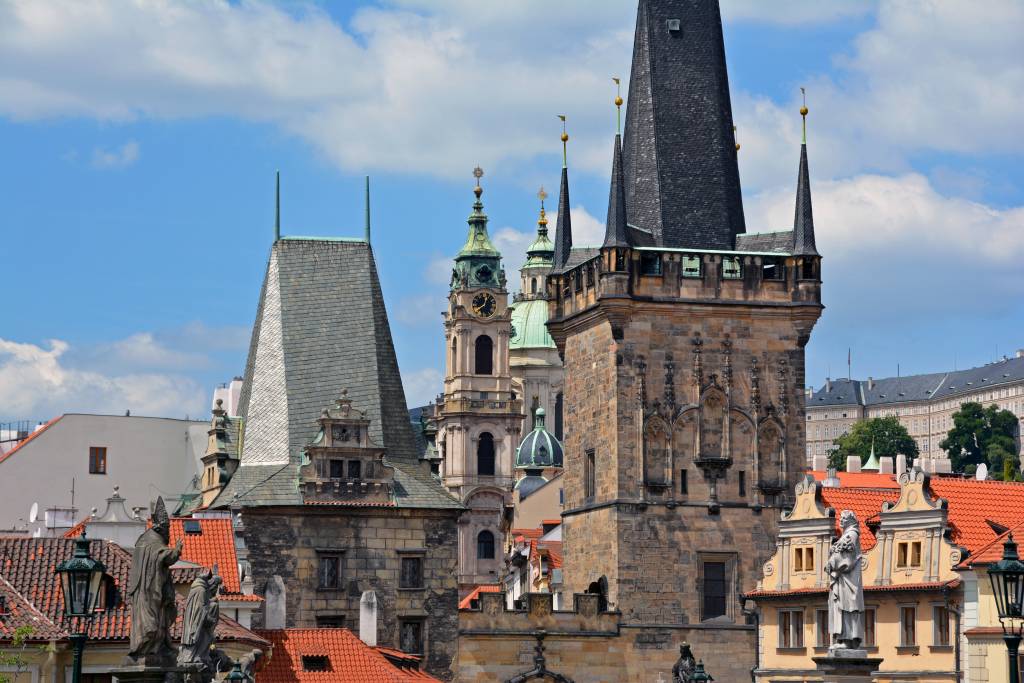 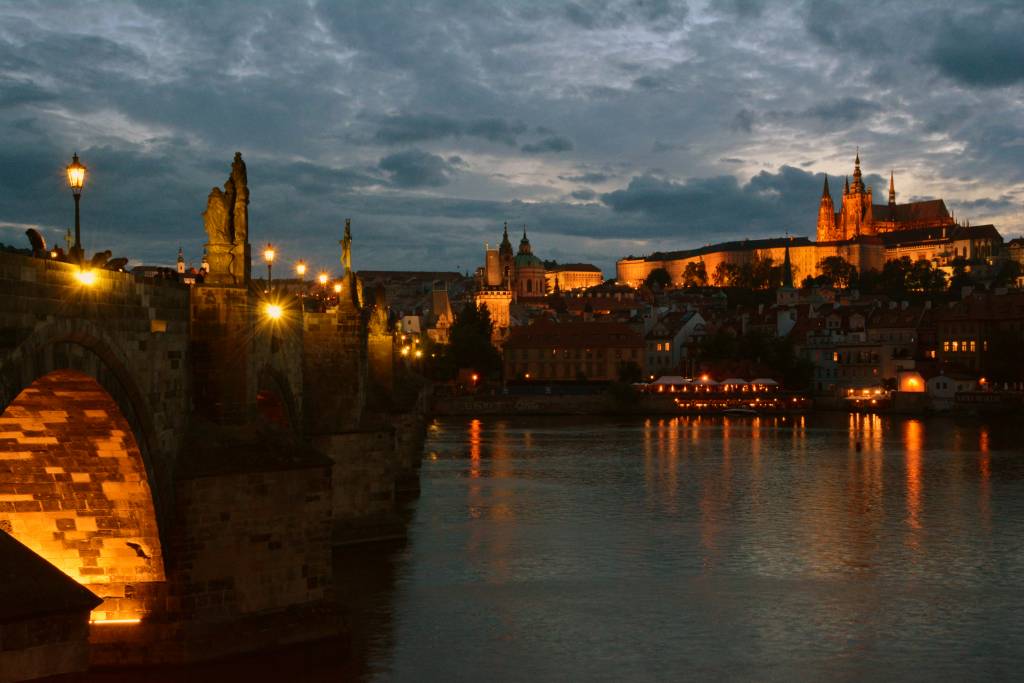 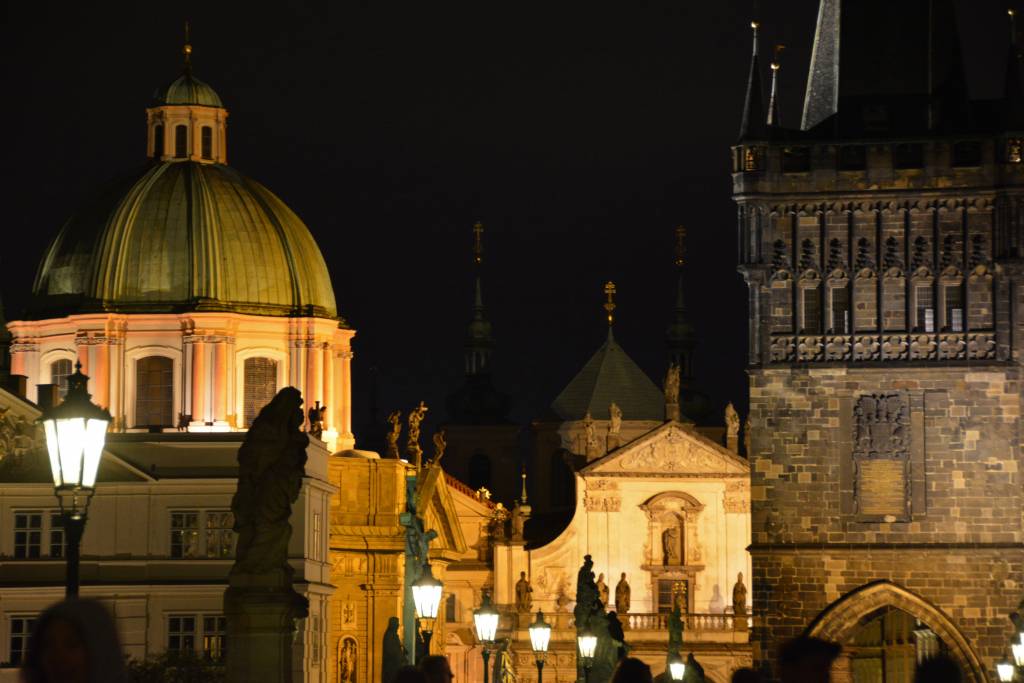 Charles Bridge is just a short walk from the Old Town Square, so Staromestska is the closest tram (and metro) stop, just as it is for the Old Town Hall Tower.

To make the most of your time in Prague, save time and money with a 2, 3, or 4-day Prague Card. Gain entry to several popular attractions, including Prague Castle, enjoy discounts on tours and shows, and get around the city with ease with unlimited use of the public transport system. No matter how you see it, we know you’ll have an amazing time in the Czech Republic’s capital city.

Check out our quick intro to Prague video!

Our stay in Prague was made possible by JayWay Travel. JayWay provides structured and customizable tours throughout Central and Eastern Europe.