Viking River Cruises offers a wide variety of cruise options in Europe, Asia, Russia, and Eygpt with tours ranging anywhere from 7 to 23 days. Because Europe has an abundance of rivers with countless small towns, there are a plethora of itinerary options including everything from exploring the heart of Germany to relaxing in the South of France and everything in between! We selected the Grande European Tour, which sailed us through 5 different countries on 3 different rivers.  It was a jam-packed 15-day itinerary calling on ports in 14 different cities/towns.

Now, come with us as we take you on…

Our tour started in Budapest, the capital city of Hungary. Though we had been to Budapest previously for an entire week, we were still able to explore new corners of the city, as there is so much to see and do in this massive and historical capital. A visit to one of Budapest’s many spas was available as an optional shore excursion, which we took advantage of, because it was to a spa we had not yet visited before. 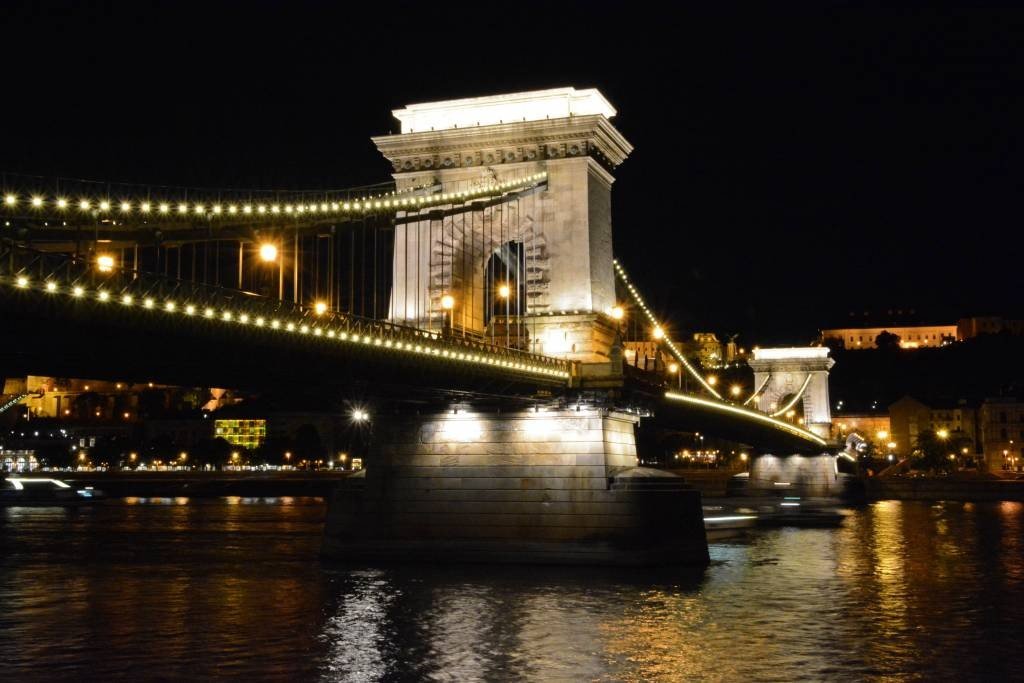 Besides the relaxing spas, Budapest has so much to offer! Ride the funicular up to Castle Hill to visit Buda’s Old Town, where the Budapest History Museum traces life from Roman times. Explore Trinity Square, home to 13th-century Matthias Church and the turrets of the Fishermen’s Bastion, which offers sweeping views over the Danube. Shop in the boutiques and mega stores along Vaci Street (Váci Utca), one of Budapest’s main pedestrian shopping streets. 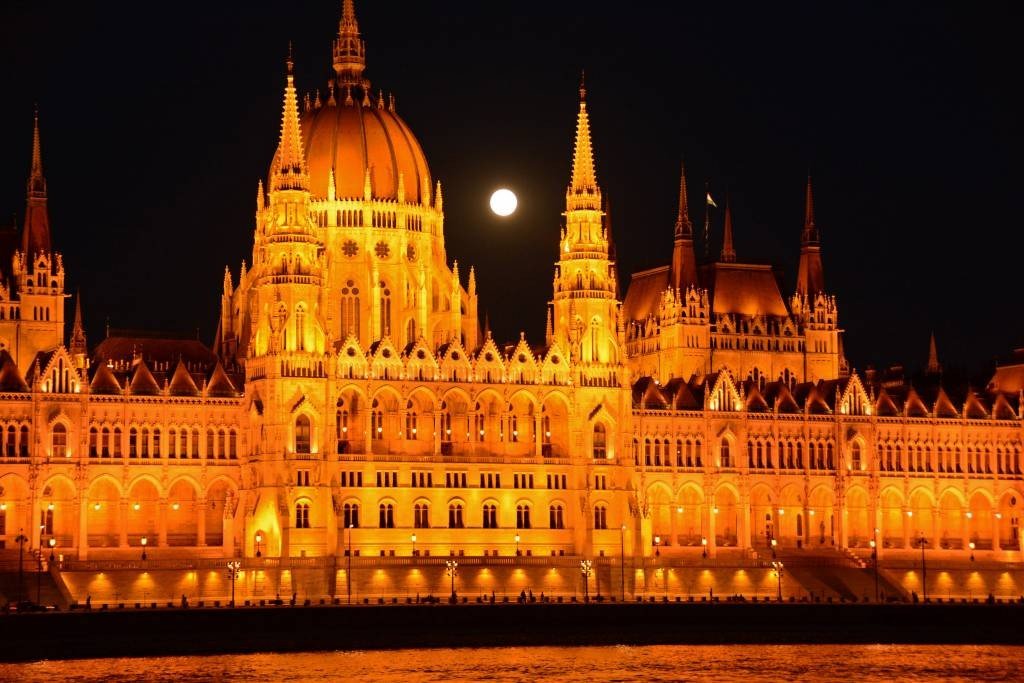 Budapest’s Parliament Building – One of the most photographed buildings in the world!

Our second stop was to a city where we had also previously spent a week. Instead of joining the included city walking tour, we elected to again go on the optional excursion where we visited the home of a local. This was a unique small-group experience that provided insight into daily Slovakian living as we sampled a delicious local cake and tea. The woman whose home we visited was a very gifted artist who shared her talents and showed us around her ceramics workshop. 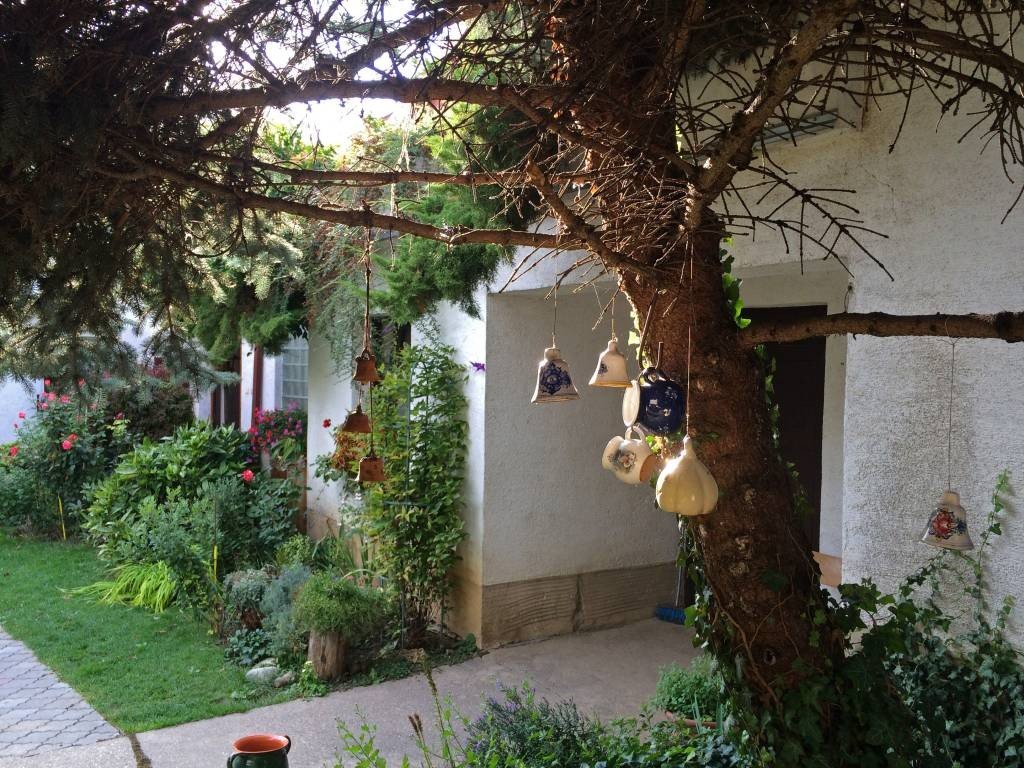 A traditional Slovak home in a small village outside of Bratislava

Of course, if you’ve never visited Bratislava before, you should definitely explore Old Town, the historic and preserved medieval center of the city. Wander through the cobblestone streets, then visit the hilltop castle and St. Martin’s Cathedral. For great views over the city, climb the winding stairs inside Michael’s Tower, ride the elevator to the observation deck on the UFO bridge, and/or visit the Slavín War Memorial. Also, be sure to sample some Slovak cuisine, like halušky, a Bratislava roll, or poppy seed pancakes. 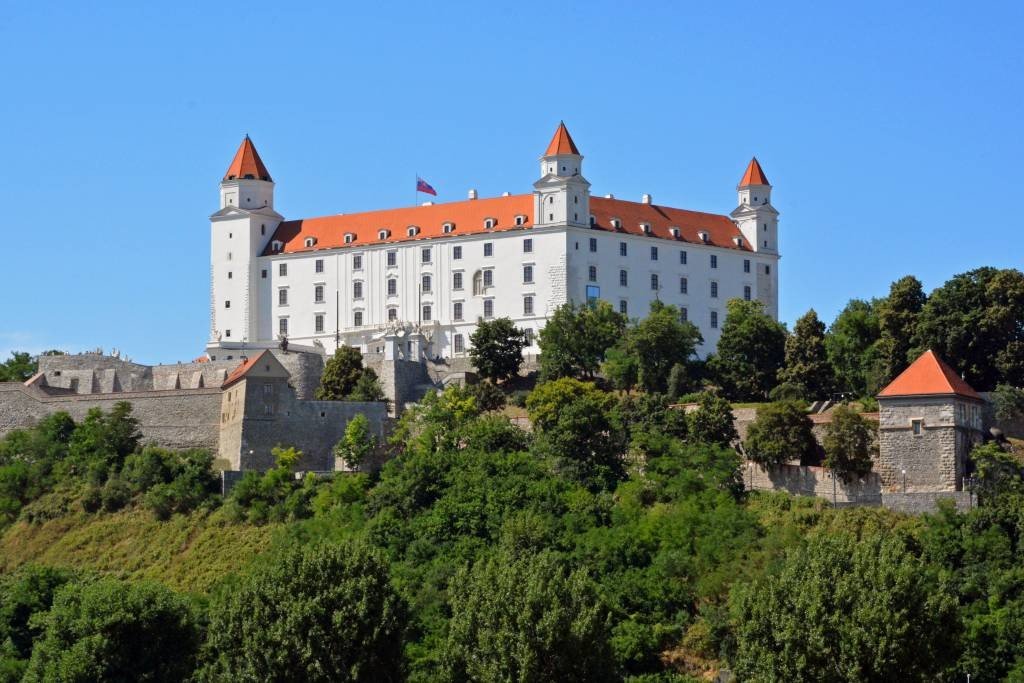 The rest of our journey took us to unexplored destinations! We were excited about going to Vienna, as we have visited much of the Austrian countryside, but hadn’t spent much time exploring its cities! As one of the world’s greatest centers of art, music, and architecture, Vienna’s city center is a massive collection of museums, concert halls, and absolutely stunning buildings! 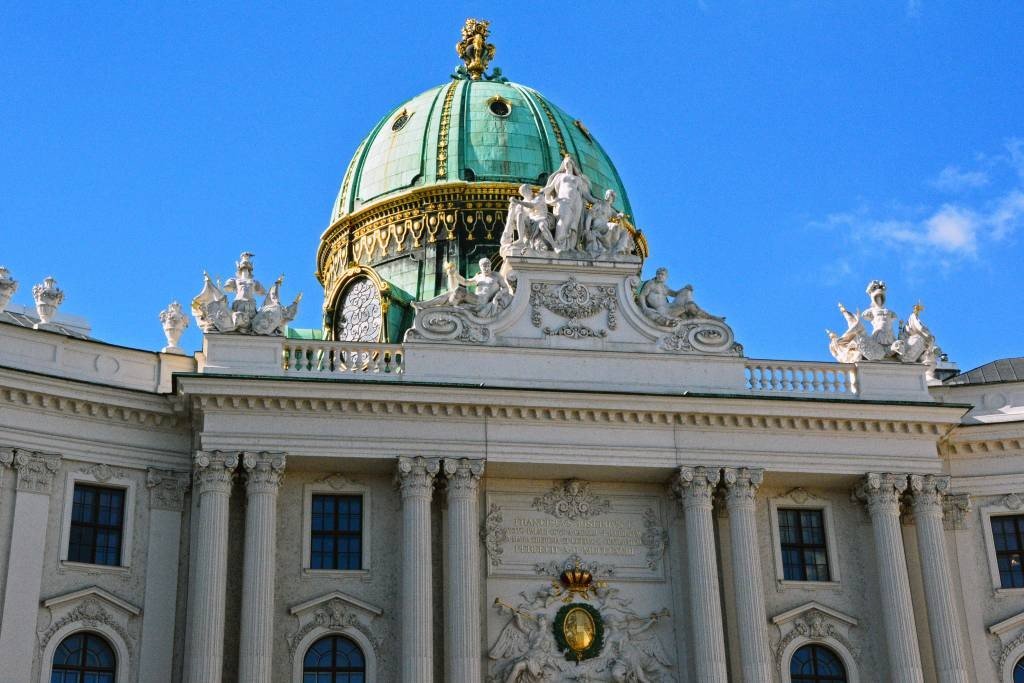 Michaelertrakt Building of the Hofburg Palace in Vienna

Following the guided city tour, we visited St. Stephen’s Cathedral, City Hall, Parliament, and of course the flagship Manner Wafer store, during our free time. There were also two optional excursions to choose from including an afternoon visit to a local farmer’s market with the on-board chef and a visit to the magnificent Schönbrunn Palace. In the evening, there is also an optional excursion (additional fee) to attend a Mozart/Strauss concert, which the majority of passengers took advantage of. I mean, who doesn’t want to listen to quintessential classical music when in Vienna? 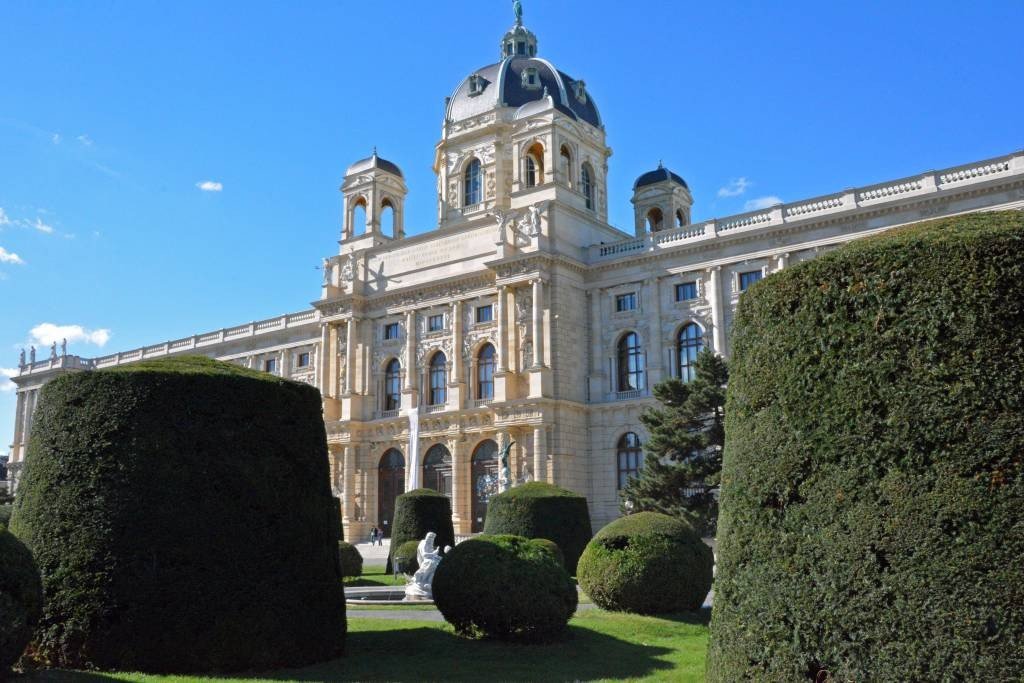 On the way to Melk, we cruised through the Wachau Valley (the stretch of the Danube between Krems and Melk in Austria). This region is the most scenic part of the river, as both banks are lined with small medieval towns, ruined castles, and terraced vineyards. 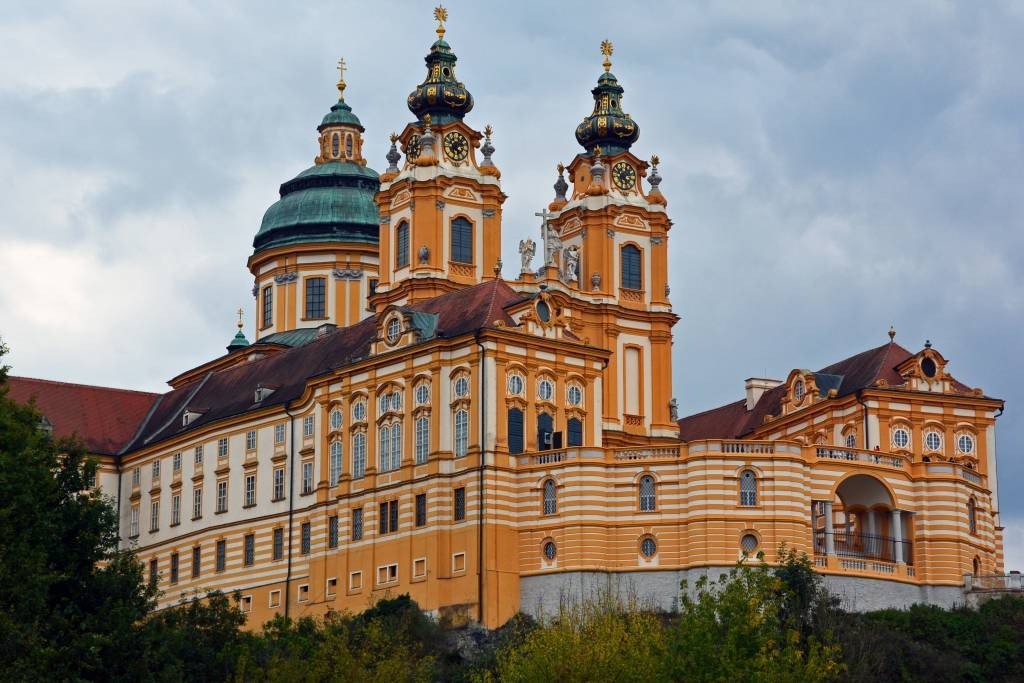 The 900-year-old Benedictine Melk Abbey is the town’s most notable feature, as it sits high on a hilltop above the small charming town below. Take the guided tour or wander the grounds on your own. Either way, you’ll be mesmerized! 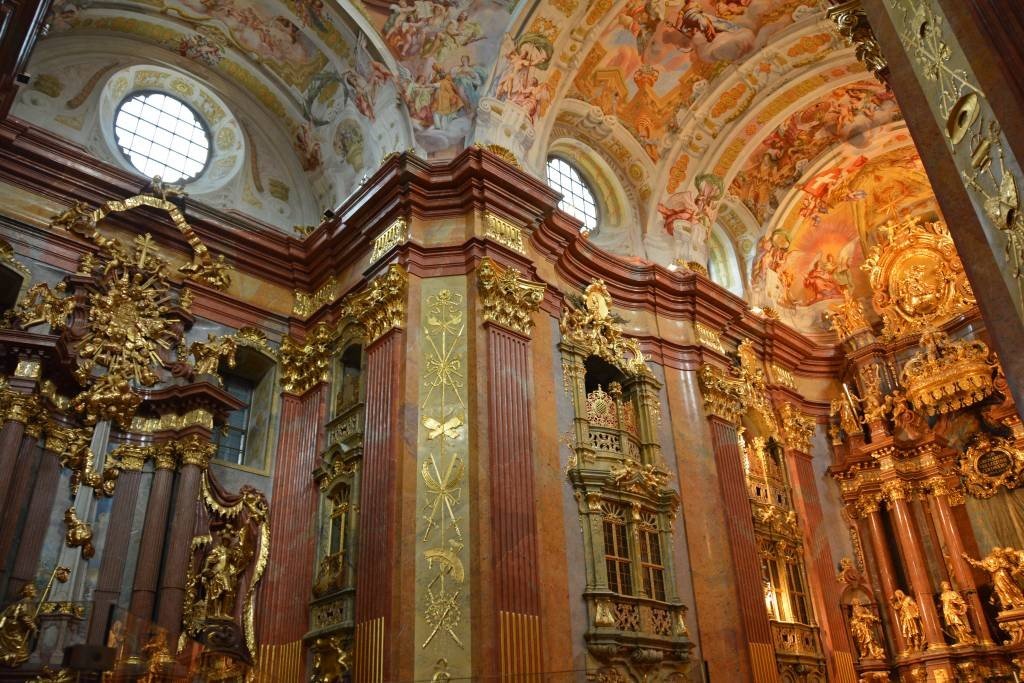 Interior of the Melk Abbey Church

Wow! 5 days in and we’re already in our 4th country! Germany is where we spent the majority of our journey. Passau, ‘The city of three rivers‘ is a beautiful introduction to Deutschland. It lies just over the border from Austria at the confluence of the Inn, Danube, and Ilz Rivers. 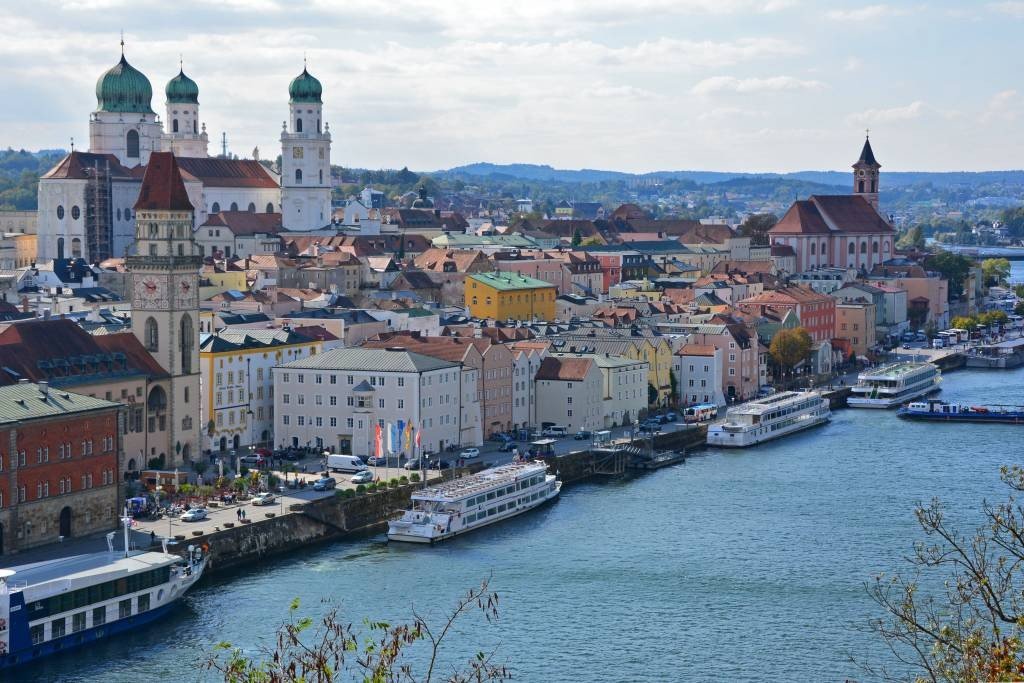 After the morning guided tour, the Viking passengers were treated to an organ concert on the world’s largest cathedral pipe organ at St. Stephen’s Cathedral. During afternoon free time, there is plenty to do and see in this small town. Wander the streets of the Old Town, visit the Glass Museum and the Woodcarver’s Shop, and hike up to Veste Oberhaus for gorgeous views over the city. 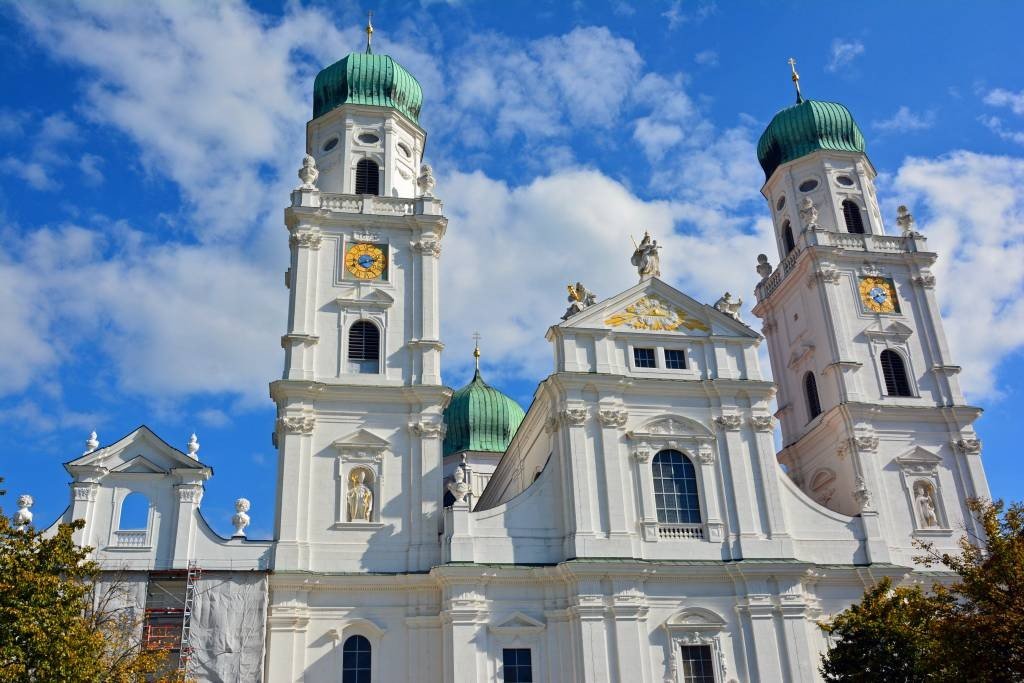 Next up, we visit the oldest town along the Danube. And despite its age, Regensburg is one of the best preserved medieval towns in all of Europe. The city center miraculously suffered no damage during the second world war. 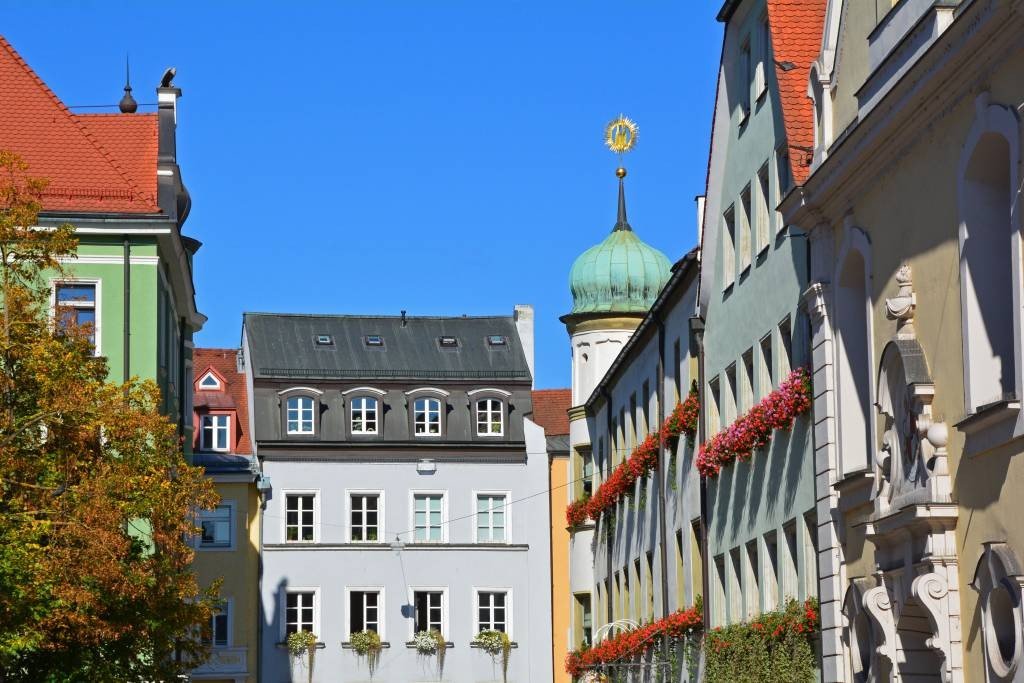 Following a guided city tour, you should spend some time in the Old Town discovering the 1,200 buildings, 800 courtyards, and 23 towers that make this UNESCO World Heritage site a true gem! The Regensburg Cathedral, which looks a lot like the massive cathedral in Cologne, is considered to be the most stunning Gothic building in all of Bavaria.

With so much to explore and so little time, this is a town to which we will definitely be returning. We chose the guided city tour, which was primarily by bus. We regretted having not taken the optional WWII tour which included visits to the Zeppelin Field, Congress Hall, and other historical sites highlighting Nuremberg’s role in WWII. 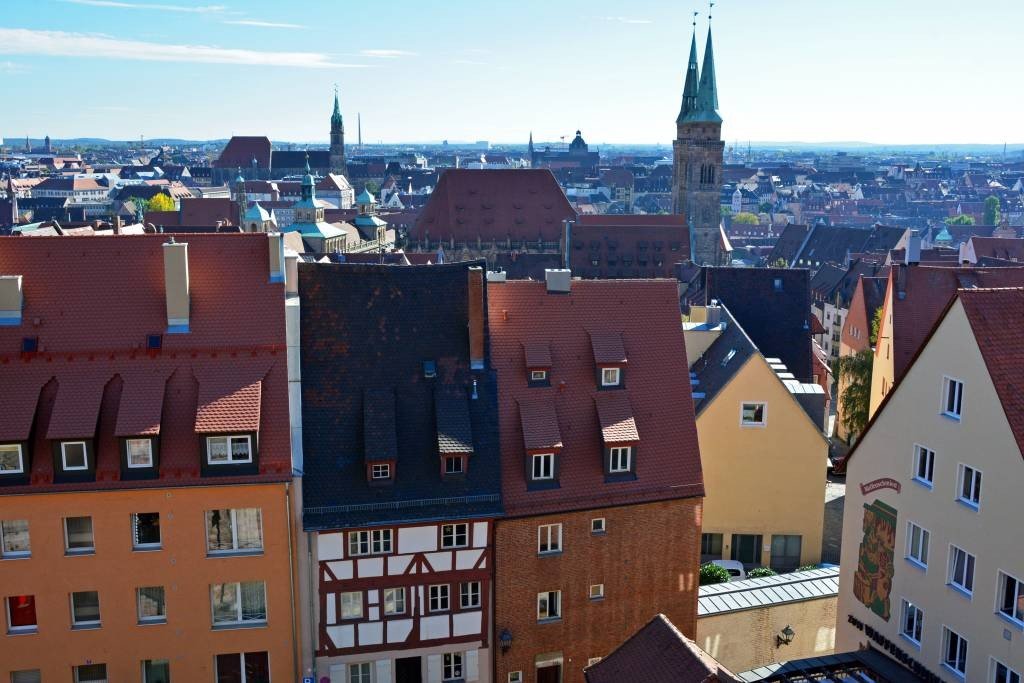 View from the Imperior Castle of Nuremberg over the city

Despite its tragic past, Nuremberg is a city rebuilt and renewed. Its traditional Christmas market is one of the oldest and most famous in all of Germany and our #1 reason for wanting to return in the near future! 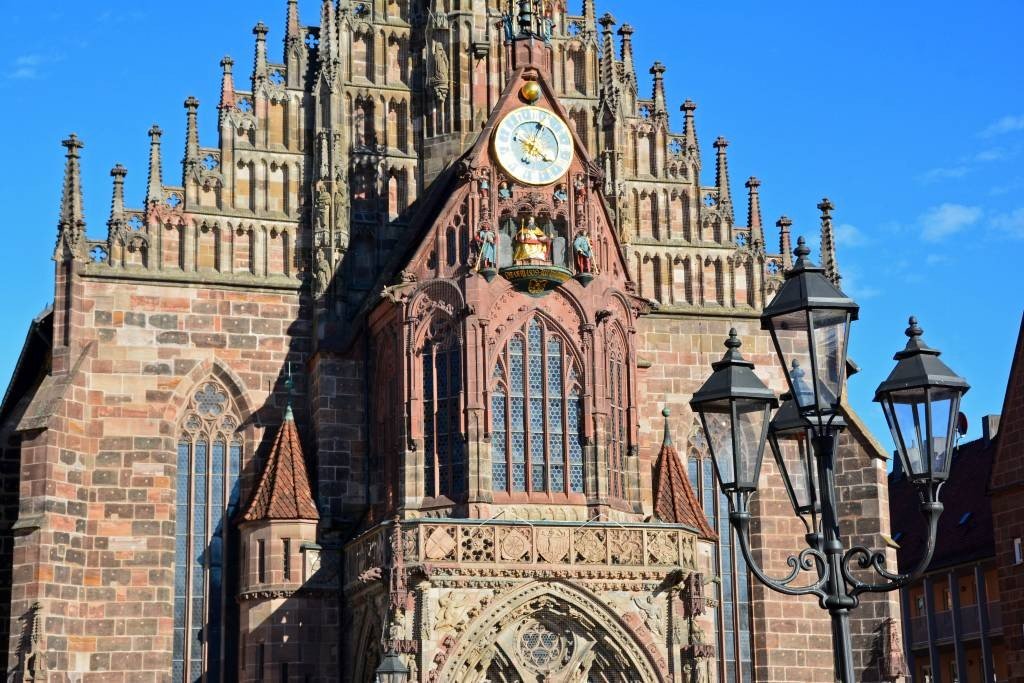 Frauenkirche ‘Church of Our Lady’ – An example of brick Gothic architecture

We absolutely adored Bamberg. The city has retained much of its original charm, because it was one of the few German cities not destroyed by bombings in WWII. Its the largest Old Town to retain its medieval structure, which is laid out as a cross with churches at the four cardinal points. 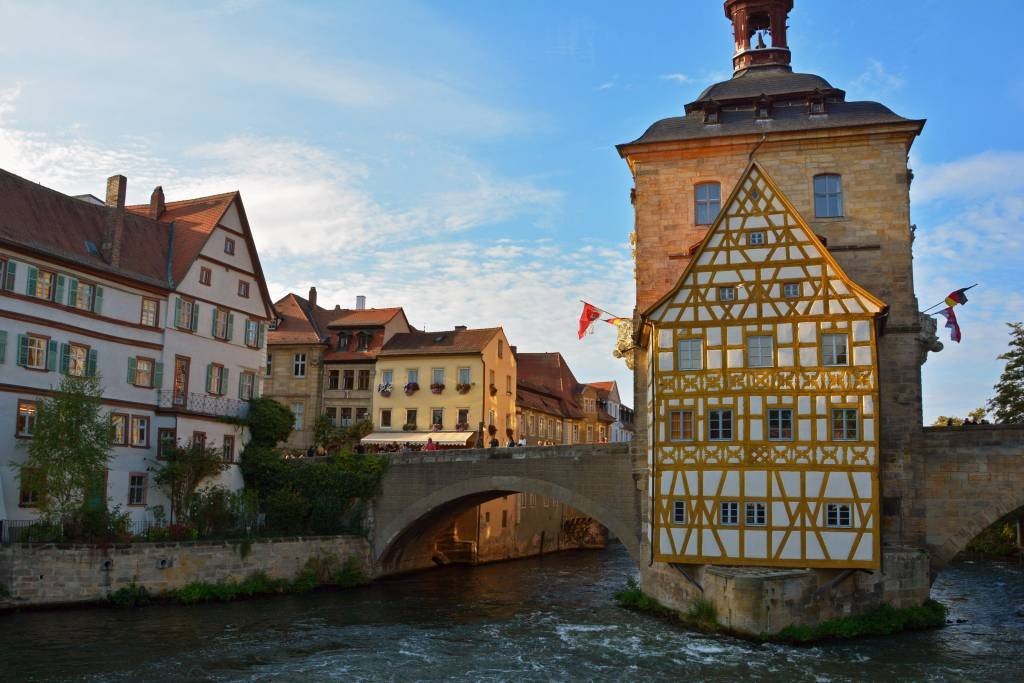 Some of our favorite attractions in Bamberg include the Old Town Hall built right in the middle of the river and ‘Little Venice’ (pictured below). During our free time, we also visited Schlenkerla, one of Bamberg’s famous breweries/taverns to sample the rauchbier, which literally translates to smoke beer. If the place looks crowded in the front (which it probably will), squeeze through to the back and have a seat in the much calmer beer garden! 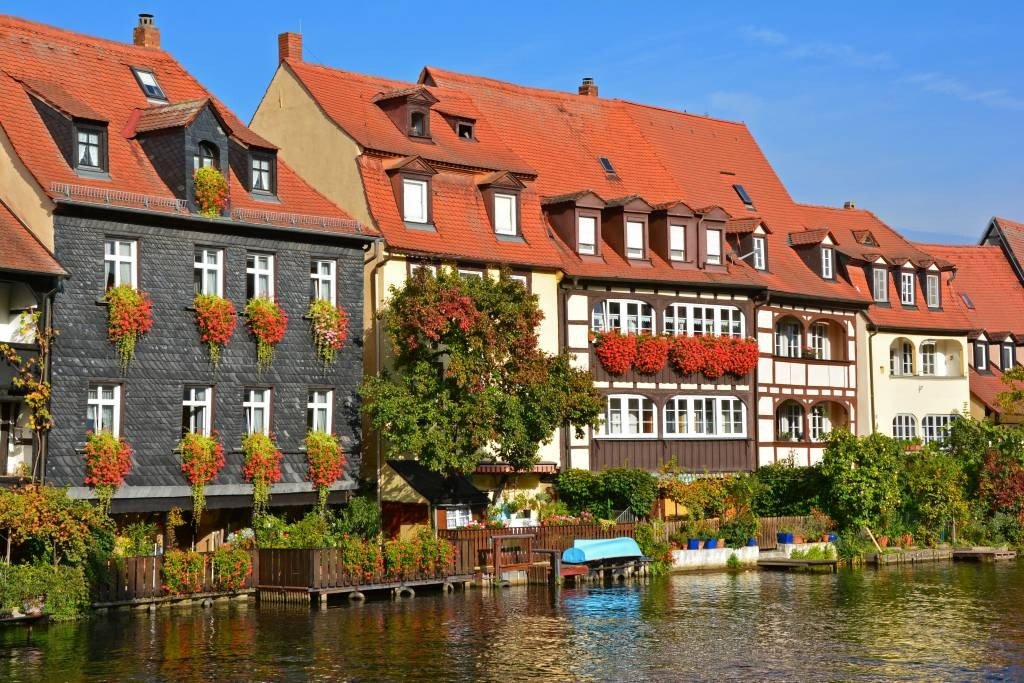 ‘Little Venice’, once a fisherman’s settlement along the shores of the Regnitz in Bamberg

We have always wanted to visit this town, so when it appeared as an optional excursion (additional fee) from the port city of Würzburg, we jumped at the chance! There are several options on this day, including the trip to Rothenburg, staying local in Würzburg and/or visiting the Würzburg  Palace. 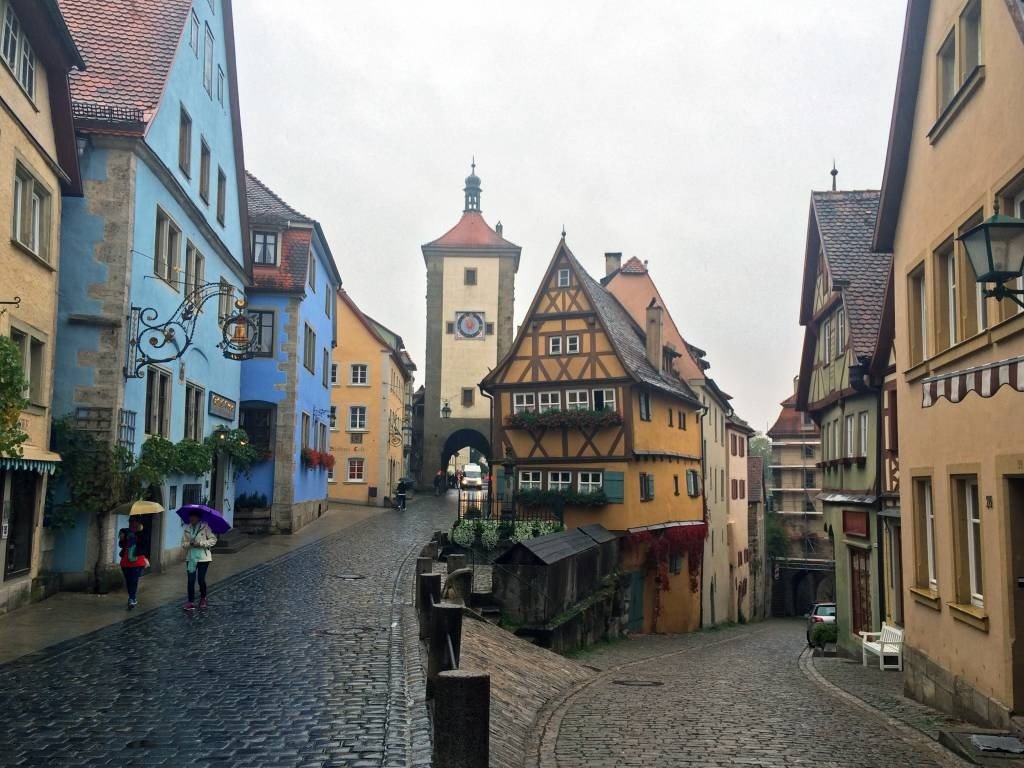 The romantic town of Rothenburg ob der Tauber in Germany

Unfortunately it rained during our entire visit to Rothenburg. Thank goodness we brought our umbrellas and also were able to take shelter as we walked around the perimeter of the city on the covered medieval wall. 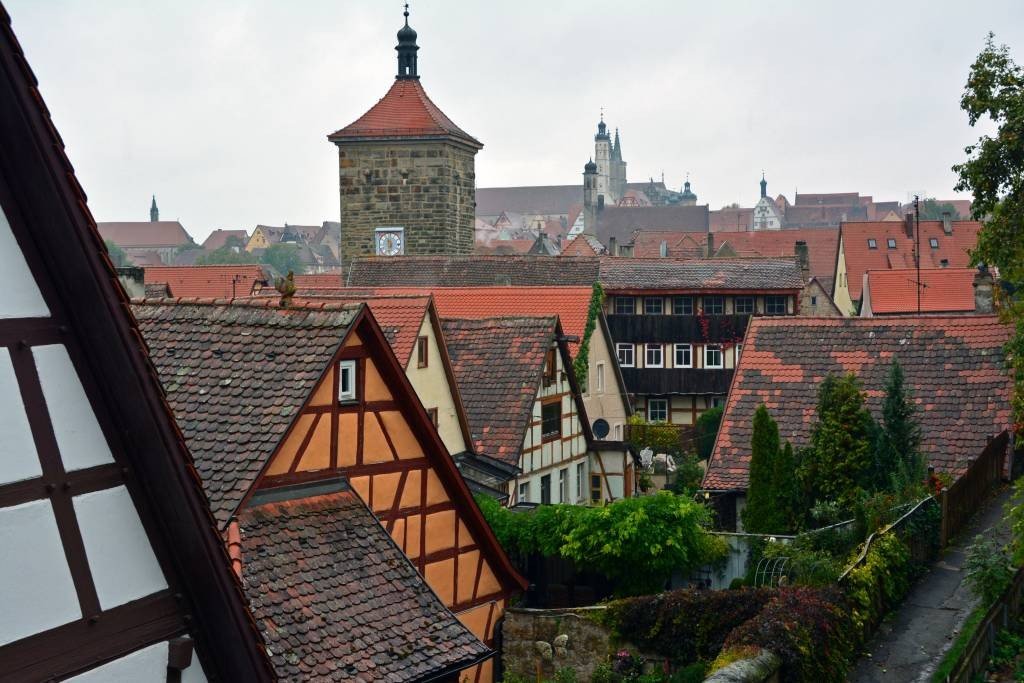 Over the rooftops, as seen from the medieval city wall

Wertheim, also known as Wertheim am Main, is located at the confluence of the Tauber and Main rivers. It’s yet another adorable small town with a medieval town center comprised of small streets and half-timbered houses. 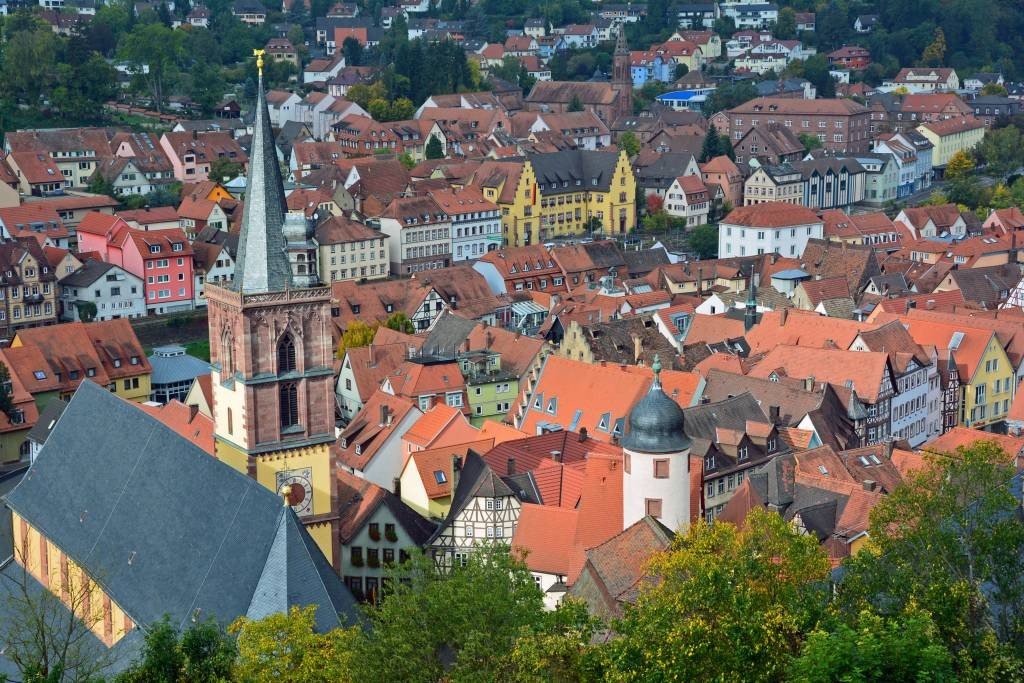 Beautiful panoramic view over the quaint German town of Wertheim

Burg Wertheim (castle) is the landmark of the town. We spent much of our free time exploring these fascinating ruins. The castle also provides outstanding views over the town and river below. 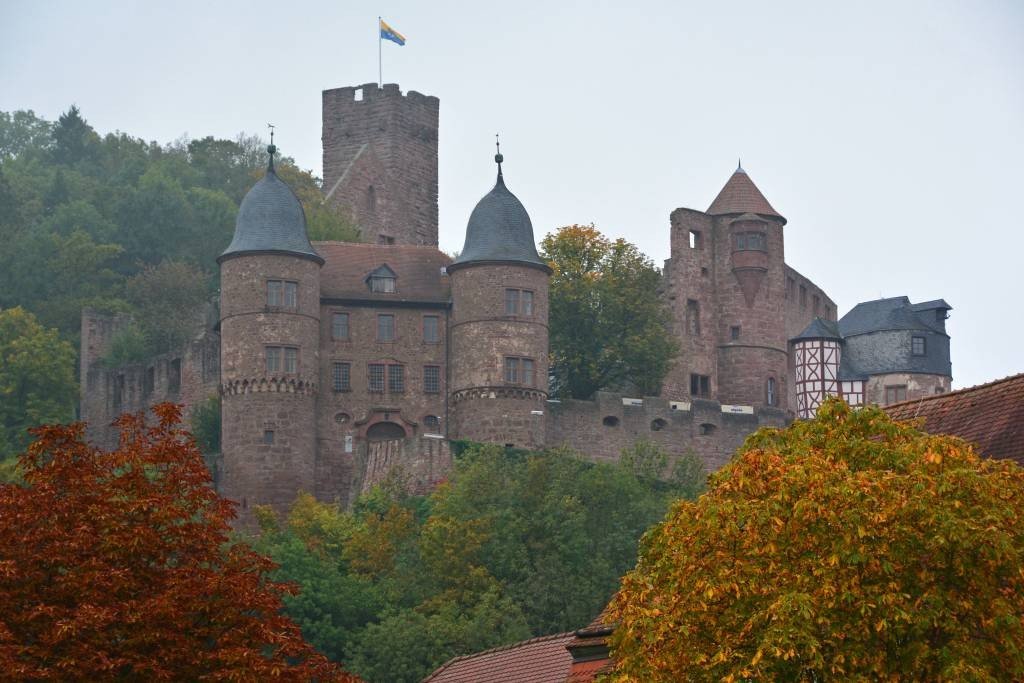 Burg Wertheim- So worth the little uphill climb!

Following a morning of the most enchanting scenic cruising along the Rhine River, we docked in the town of Koblenz. Today was another day of many options. You could go on a scenic drive/wine tasting tour, stay local and explore the town of Koblenz, or like we did, visit and tour the nearby Marksburg Castle. 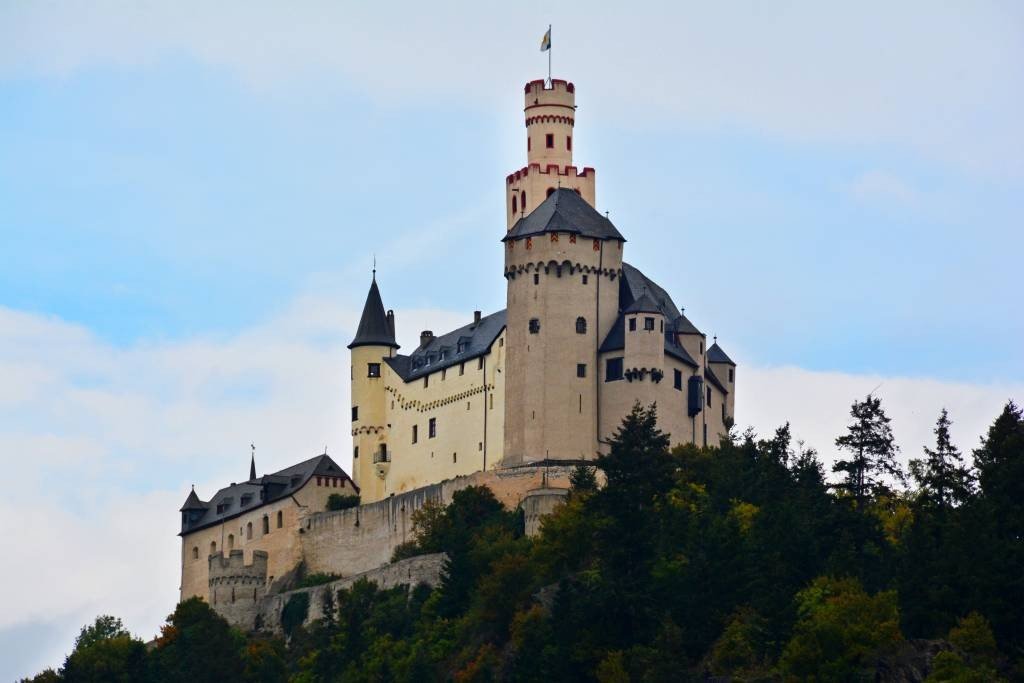 After our visit to the castle, we still had some free time to explore the small town of Koblenz. We were mesmerized by the History Column Fountain (Historiensäule) in the main sqaure, which represents the history of the town from the time of the Romans to present day. 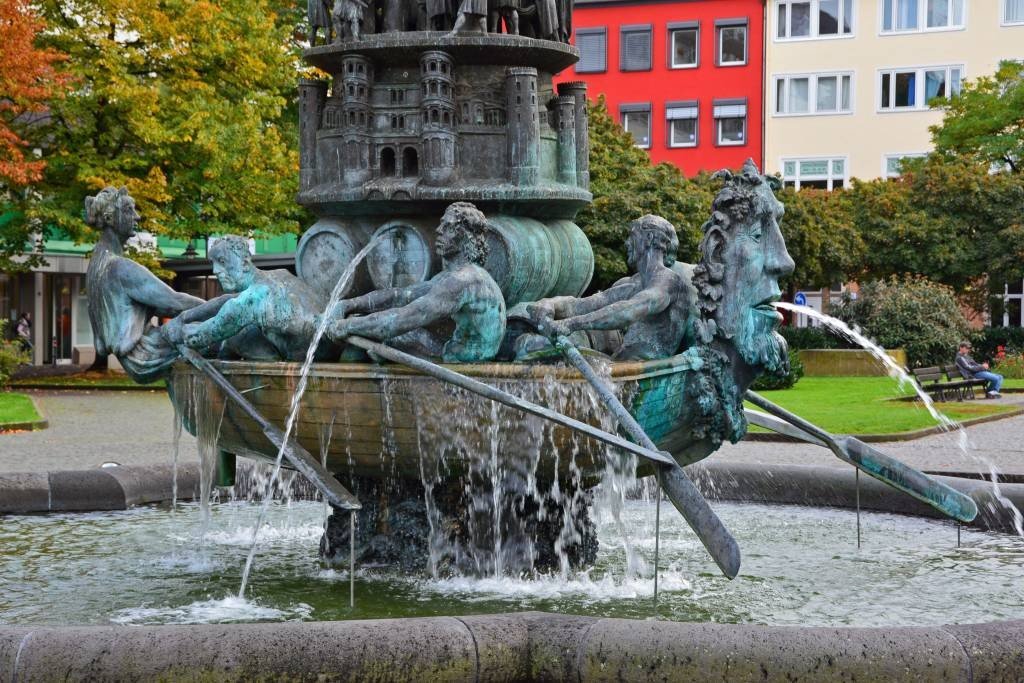 Alas, our time in Germany had come to an end! For our final stop in Deutschland, we visited Cologne, home to one of the world’s most gorgeous Gothic cathedrals. We honestly spent much of our time in the city exploring this Gothic masterpiece! 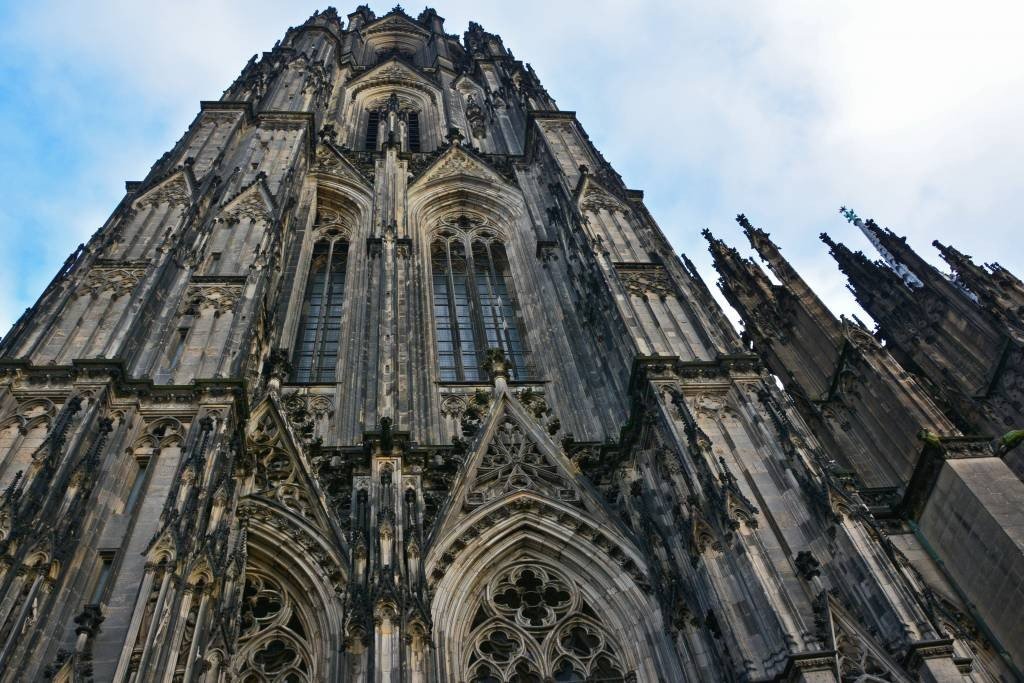 Due to halts in construction, the Cologne Cathedral took over 600 years to build!

Other city attractions include a plethora of museums like the famous Chocolate Museum, the Roman Germanic Museum, and the Wine Museum, to name a few. We actually spent our evening hanging out with an old friend who happens to live in the city. So, we met up at Früh, the second largest beer hall in Germany (behind Hofbrauhaus in Munich), to reminisce about old times. 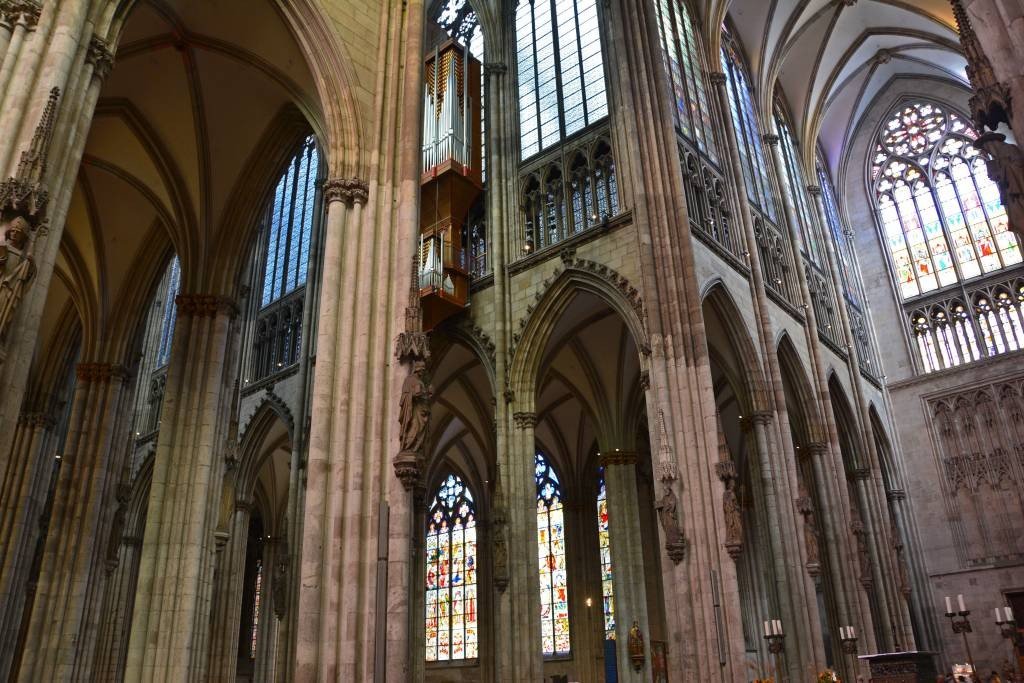 The magnificent interior of the Cologne Cathedral

For our final day on-board the ship, we stopped in the small Dutch village of Kinderdijk. We had the option to tour the famous windmills, but instead we elected to visit a local cheese farm. We LOVE cheese and thought it would be neat to see its production. 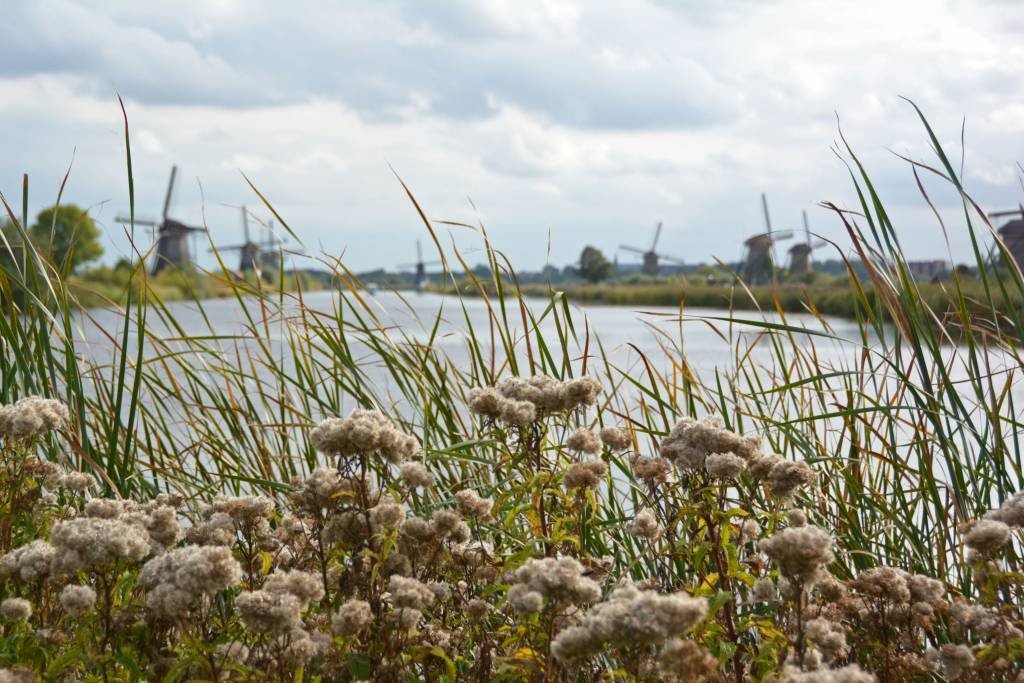 The Windmills of Kinderdijk

We didn’t really enjoy the first half of the tour as it was through the smelly and cramped holding pens for the dairy cows. Supposedly it was milking time, so they aren’t normally so cramped, but we still struggled with the conditions. The second half of the tour was much more fascinating as we learned about their process for producing yummy Gouda cheese. We had the opportunity to purchase cheese from the local farm, which we’ll admit, didn’t even last through the evening! Our new friends on board the ship were happy that we wanted to share our purchase! 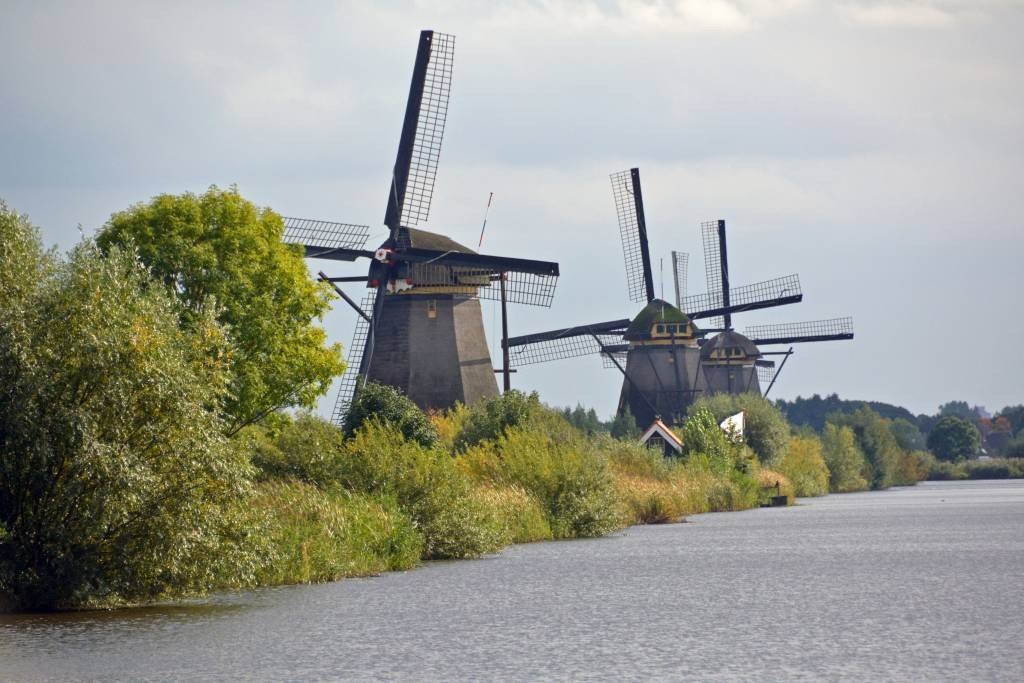 They say all good things must come to an end, and while we don’t completely agree with this sentiment ALL of the time, we were sad that our cruise had in fact come to an end in Amsterdam. There is no guided city tour or scheduled activity (unless you book an extension to your cruise with Viking), so once we disembarked in the early morning, we were on our own! 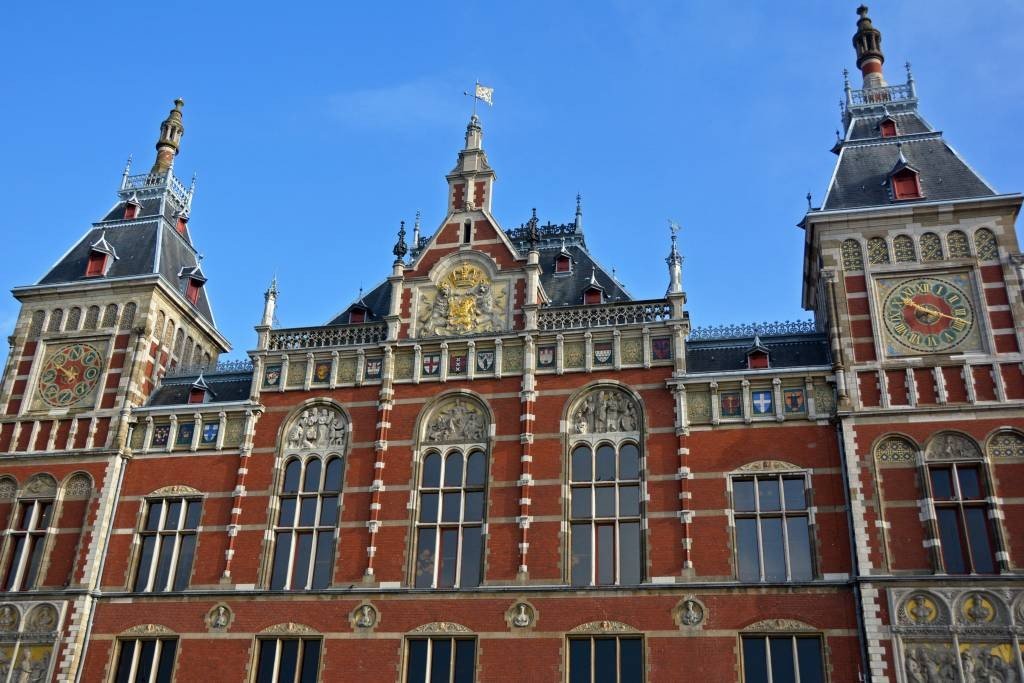 We had visited Amsterdam last summer, so instead of again touring the city, we met up with a Dutch friend and hiked in the nearby National Park Zuid-Kennemerland. 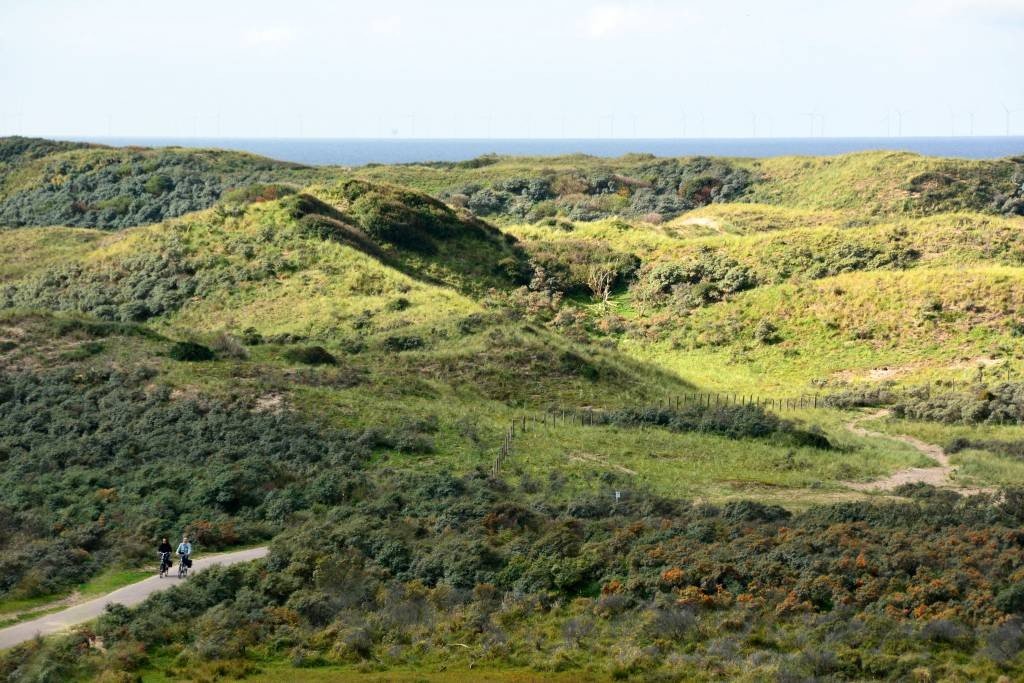 So, WOW… what a great holiday! 2 weeks of luxury accommodations, scenic cruising, small towns, capital cities, new friends, and countless memories! Unfortunately we had to swap ships halfway through the trip due to low water levels in the Danube. However, the transition was done efficiently and professionally and was only a minor disruption in our journey. This was our very first river cruise, and we can guarantee that it will not be our last. Stay tuned for our post where we compare river cruising to ocean cruising, recognizing that there are perks to both. 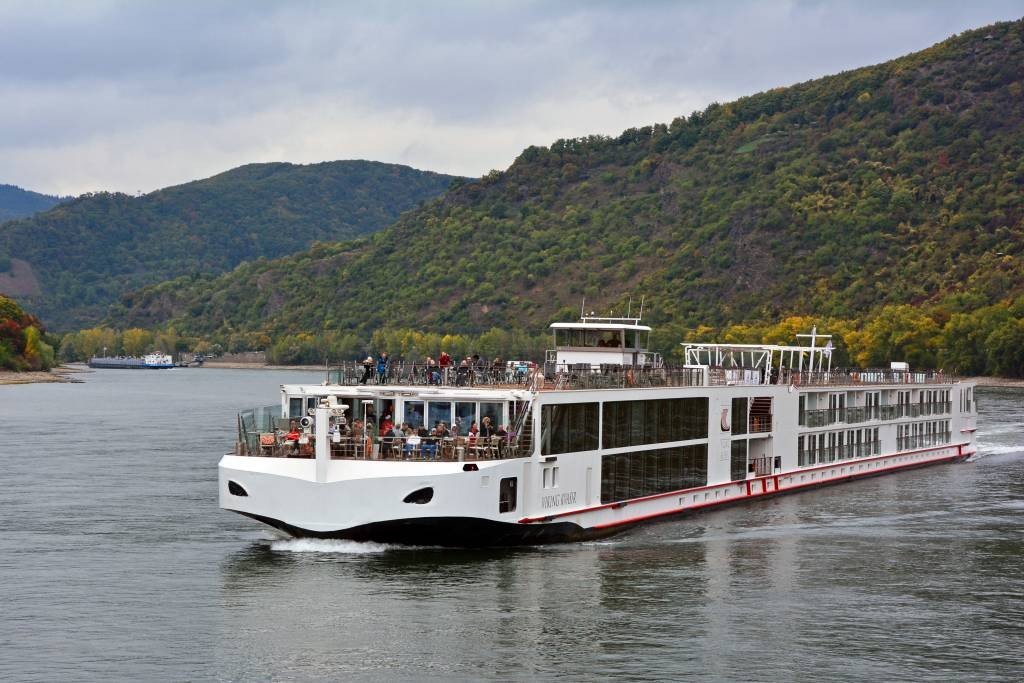 Scenic Cruising Along the Rhine River in Germany

We’d like to thank Viking River Cruises for the opportunity they provided in order for us to share our experiences with you. As always, our write-ups are an accurate reflection of the experiences we had.