Bratislava is a fairly flat city and isn’t necessarily known for having towering buildings or monuments. However, there are a few hilltop attractions and places around town to get up and over the rooftops for beautiful panoramas.

Michael’s Gate in Old Town has withstood the test of time and remains the only preserved gate in the city’s medieval fortification. As such, it also ranks as one of the city’s oldest buildings, having been built at around the year 1300. 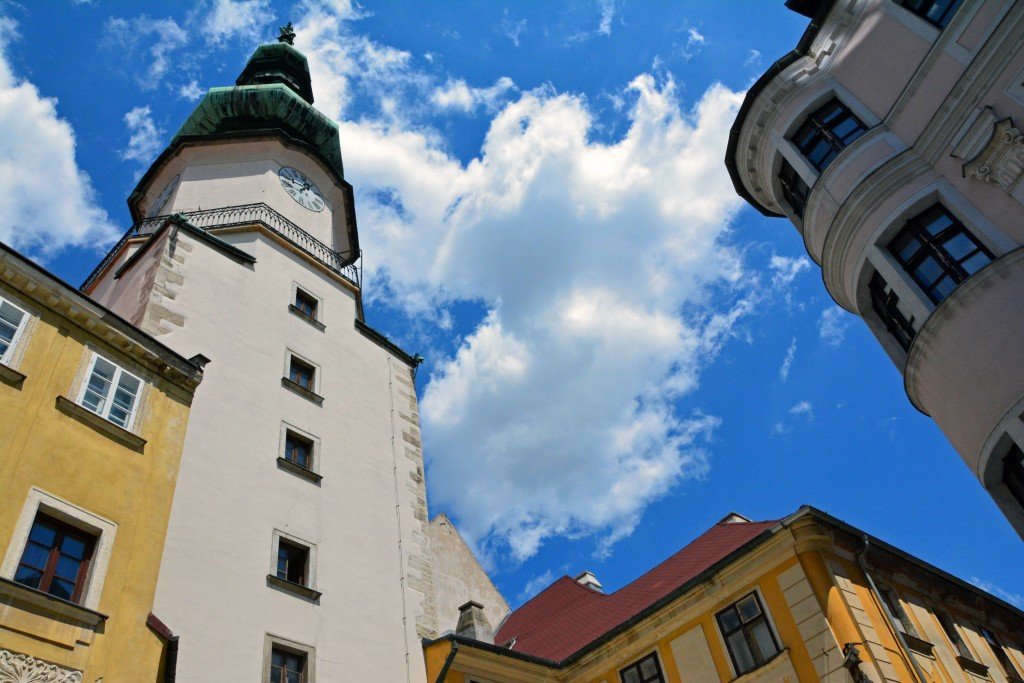 The wall and its tower were reconstructed in the mid-1700s and it was at that time that a statue of St. Michael and a dragon were placed on top of the tower. It now houses the Bratislava City Museum, Exhibition of Weapons. 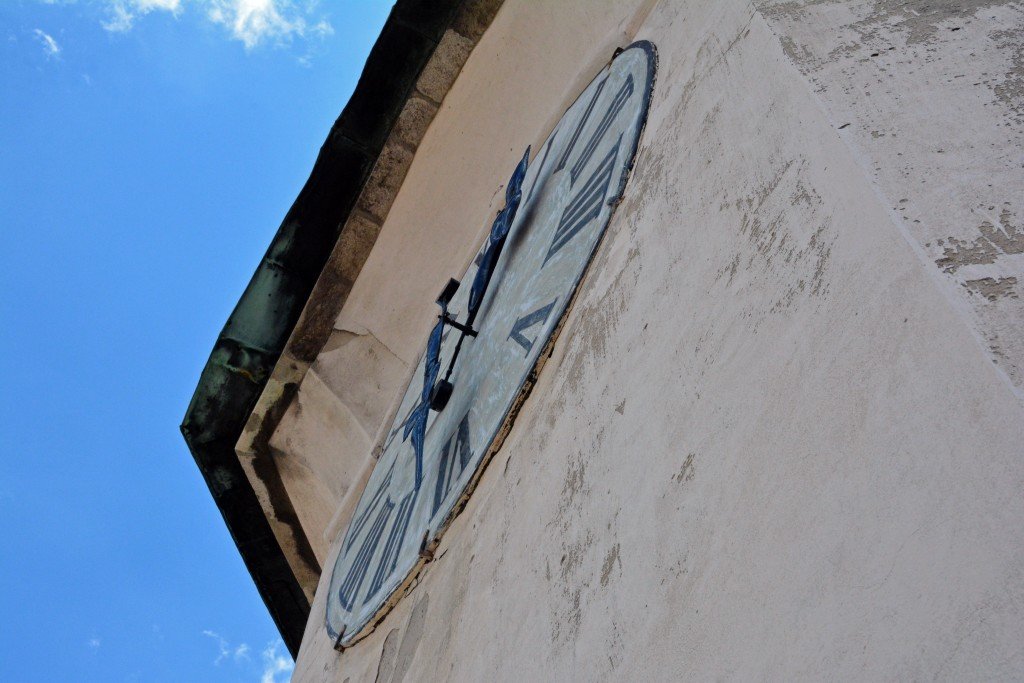 The weapons were, of course, fascinating, but we were most interested in the views from the tower. 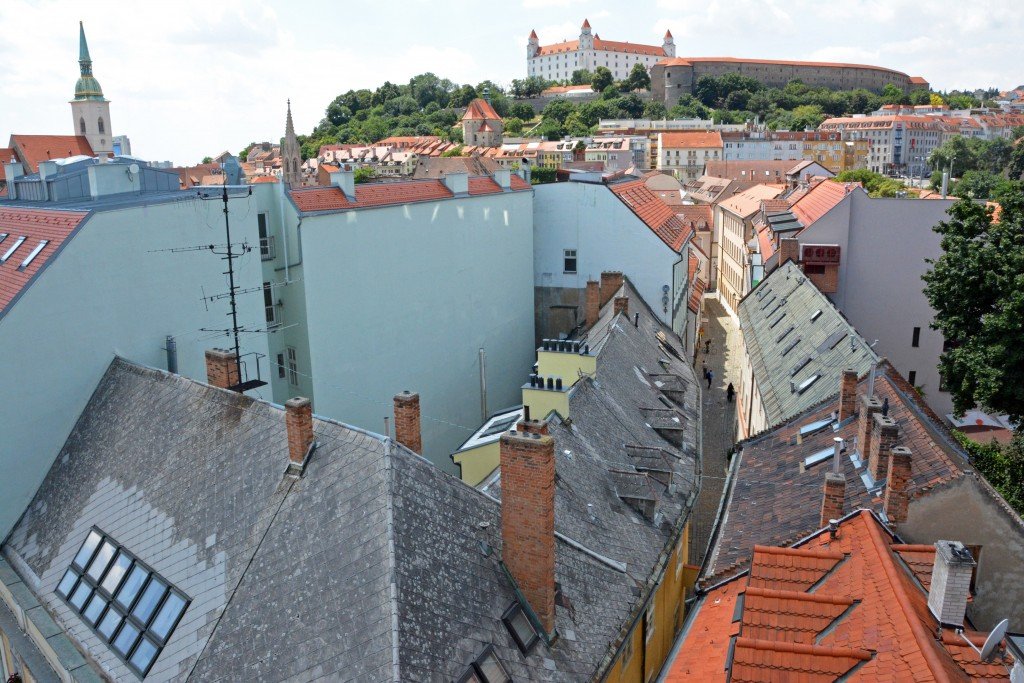 From Michael’s tower, you have a 360-degree view of Old Town Bratislava. 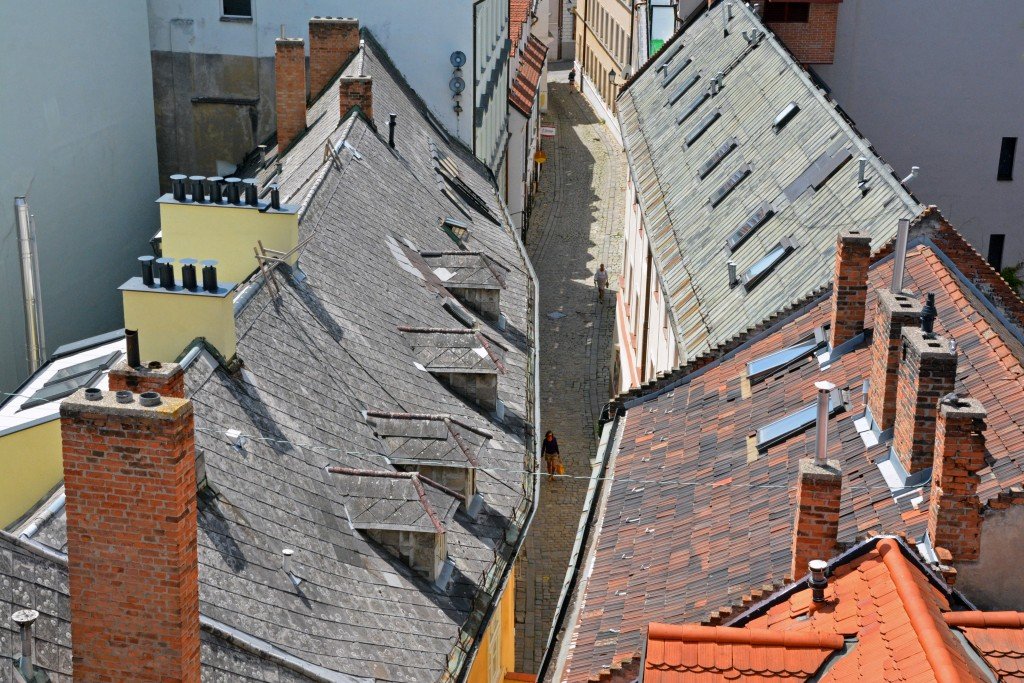 The observation platform atop the tower was only wide enough for one person, and maybe one to pass by. We were the only two people up there for our entire visit, so there was never any competition for the best vantage point. To the south, peer all the way down Michakska Street in the direction of the Danube to spot the ‘UFO Bridge’ in the distance. 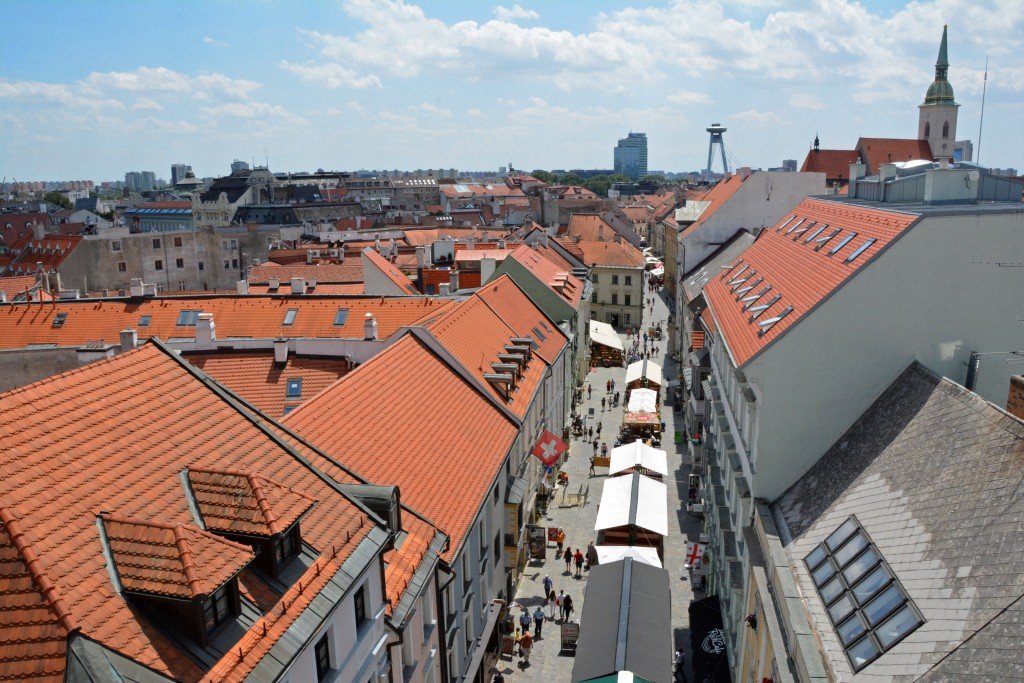 On the back side of St Michael’s Tower you can see the Trinitarian Church (right) and the Slavín War Memorial and Kamzík TV Tower way in the distance. 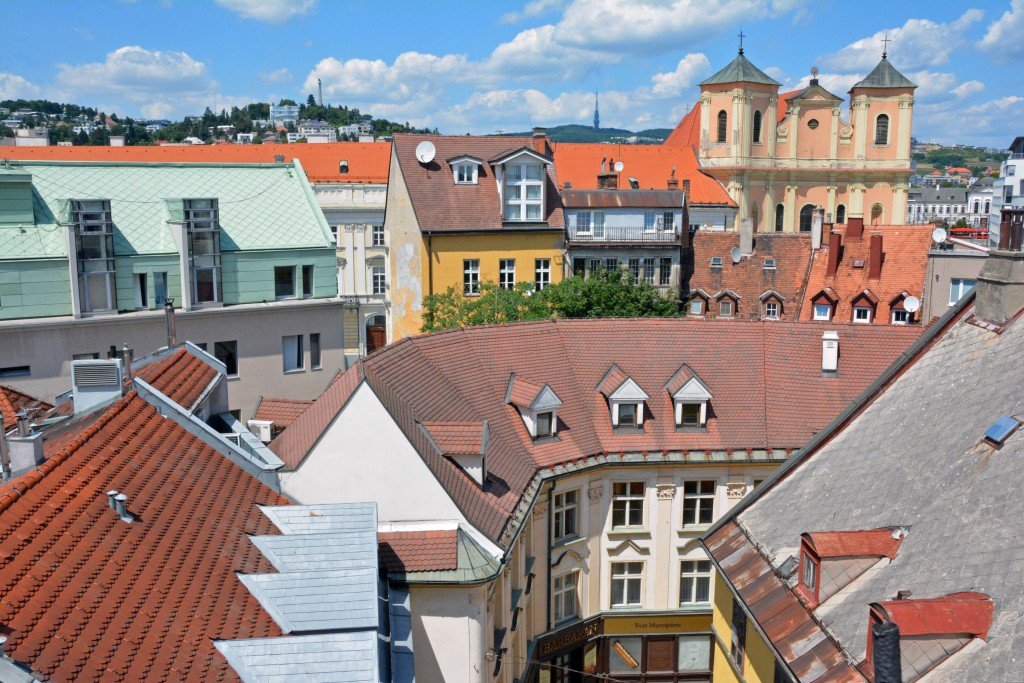 Construction of the SNP Bridge (Bridge of the Slovak National Uprising), more commonly referred to as Most SNP or Nový Most (New Bridge) finished in 1972. It spans the river Danube, suspended from a single pylon, with a UFO-like structure sitting atop the pylon. 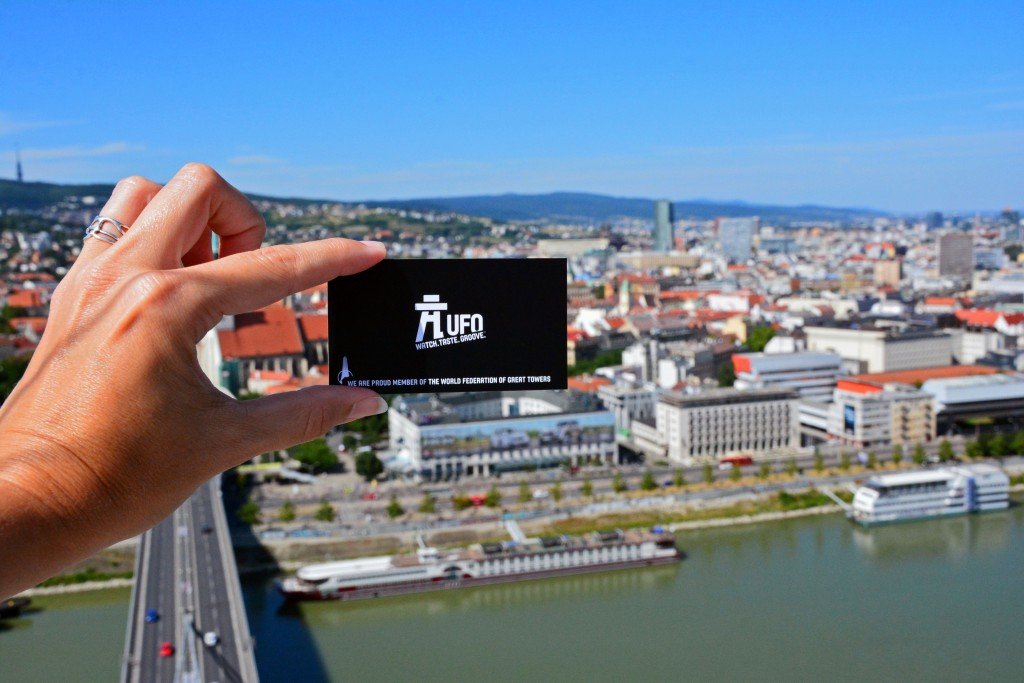 For a nominal fee (6,50€, July 2015 / or 50% off with your Bratislava City Card), visitors can take the elevator to the restaurant located within in the UFO. If you dine in the restaurant your elevator fee is waived. Or you can by-pass the restaurant and climb a set of narrow stairs up to the outdoor observation deck. 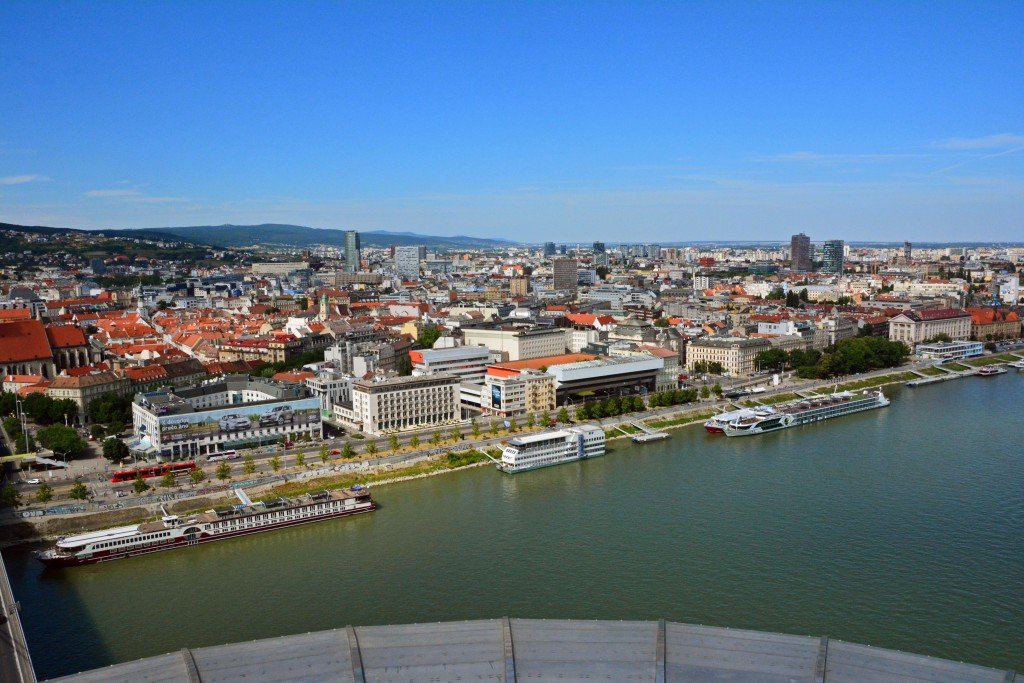 Much like Michael’s Tower, the observation deck offers panoramic views of Bratislava for a radius of 62 miles (100 km), including Old Town, Bratislava Castle, and on a clear day the countries of Austria and Hungary! 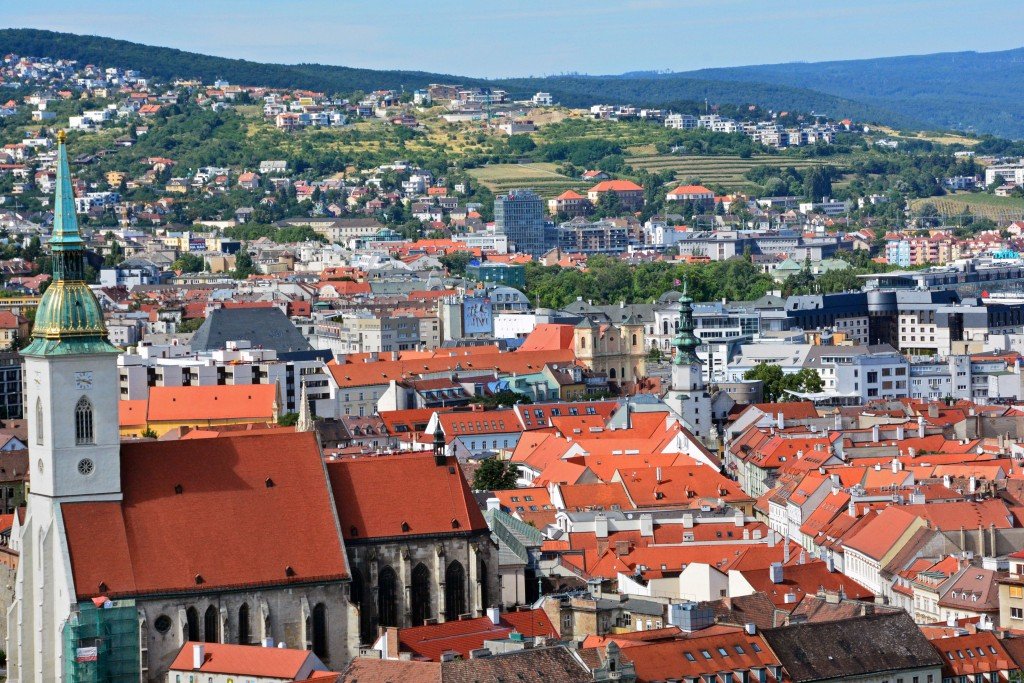 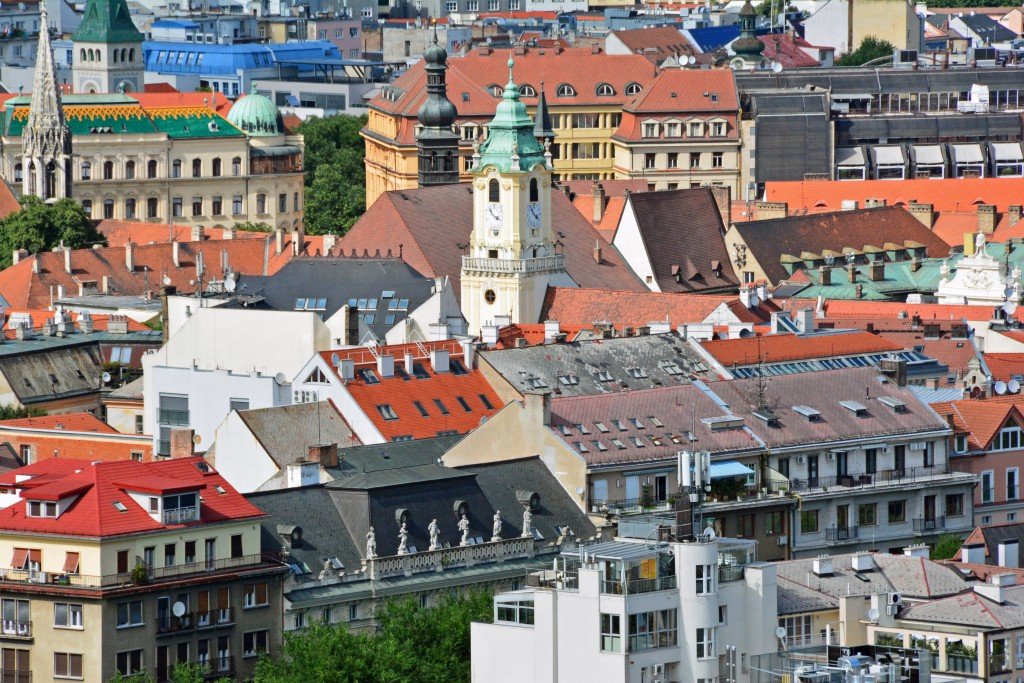 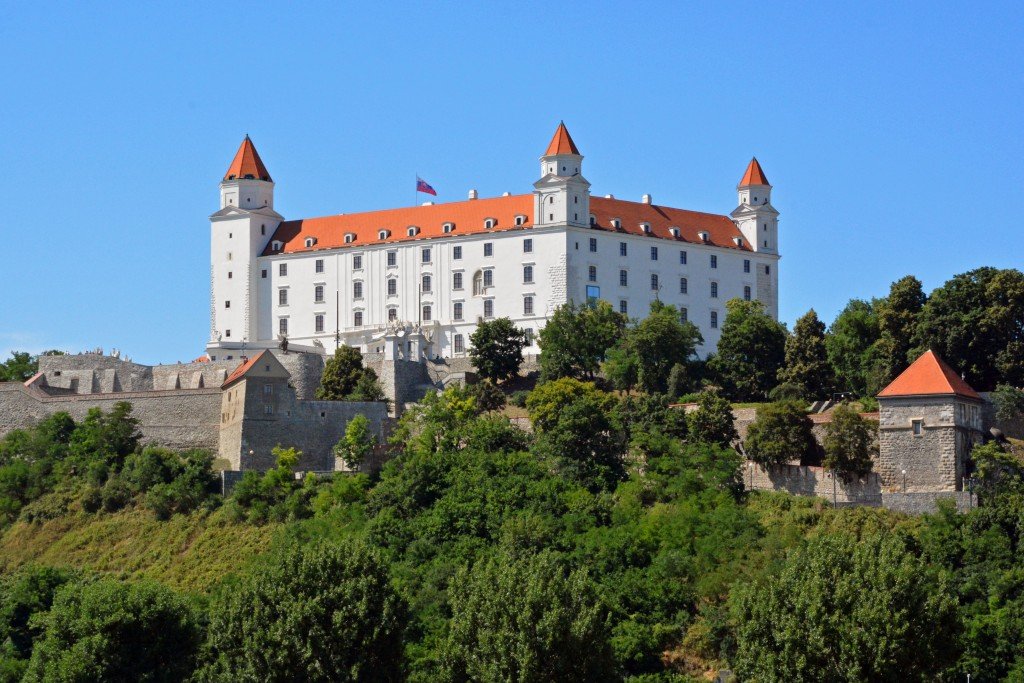 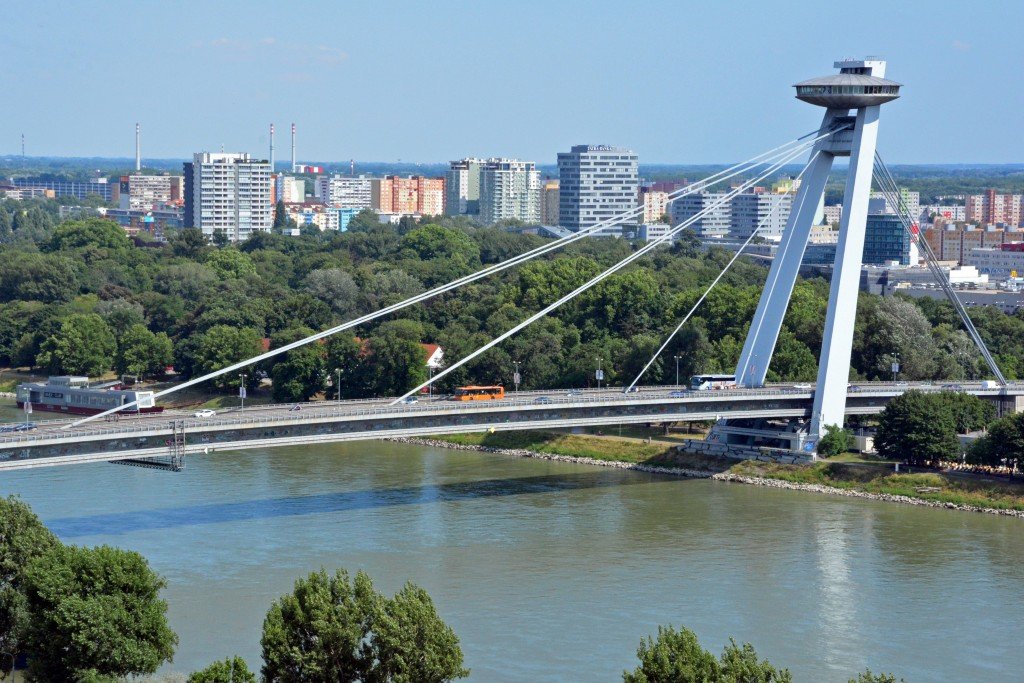 Establishing its dominance on a hillside along the Danube, Bratislava Castle overlooks the entire city. It only costs a few euros to enter into the castle and explore its museum, but we were quite enjoying the views and didn’t actually end up going inside. The views over Old Town are worth the hilly climb to the castle grounds! (Of course, there is also public transportation to the castle, if you need it.) 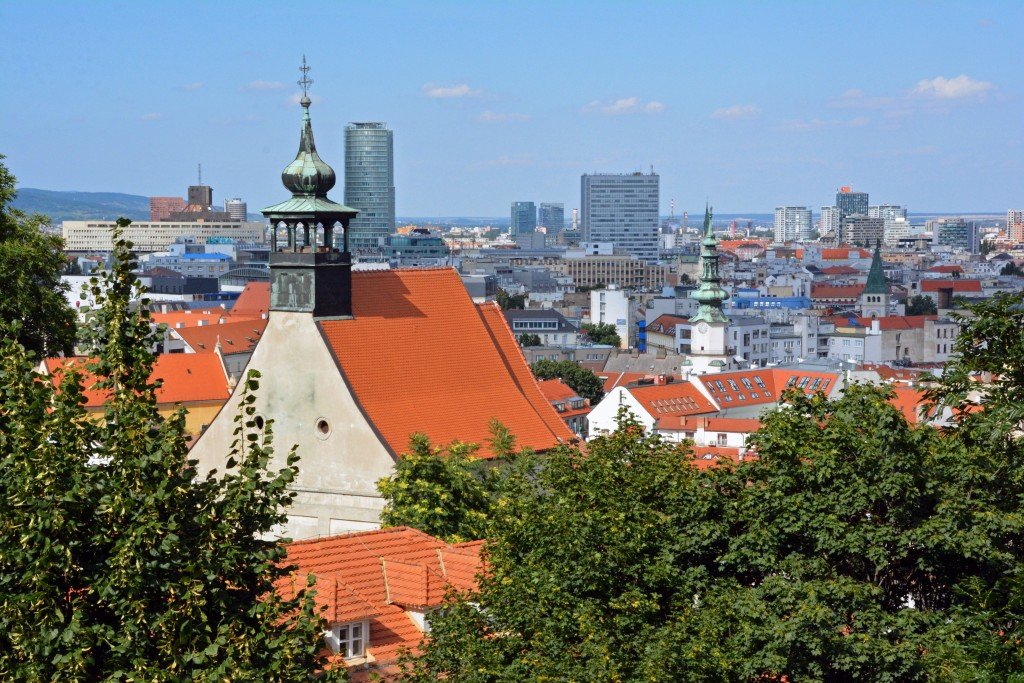 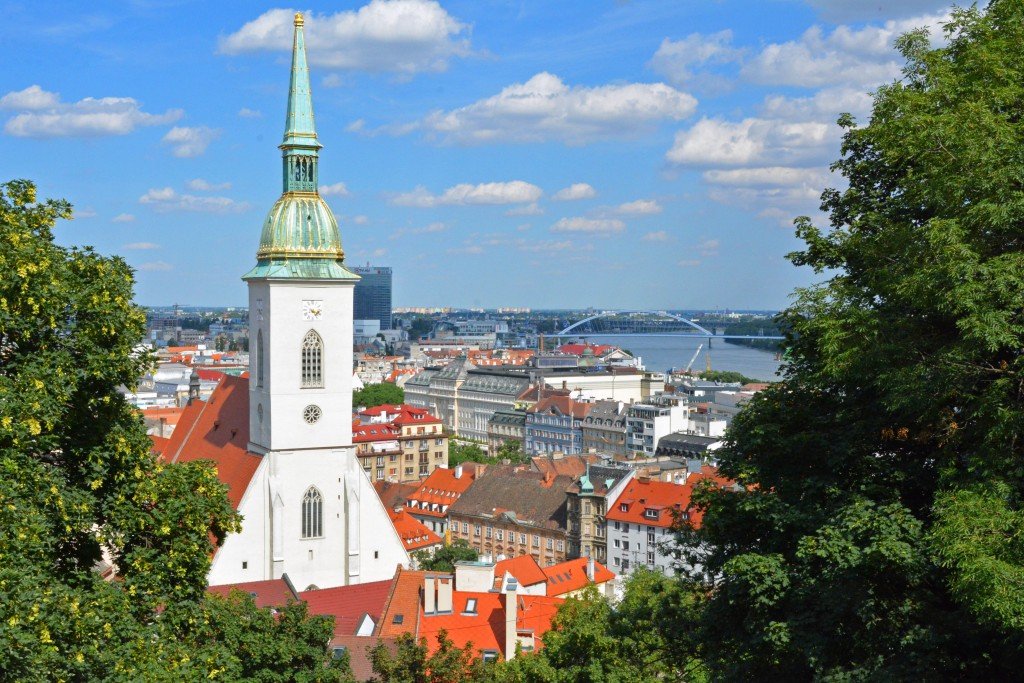 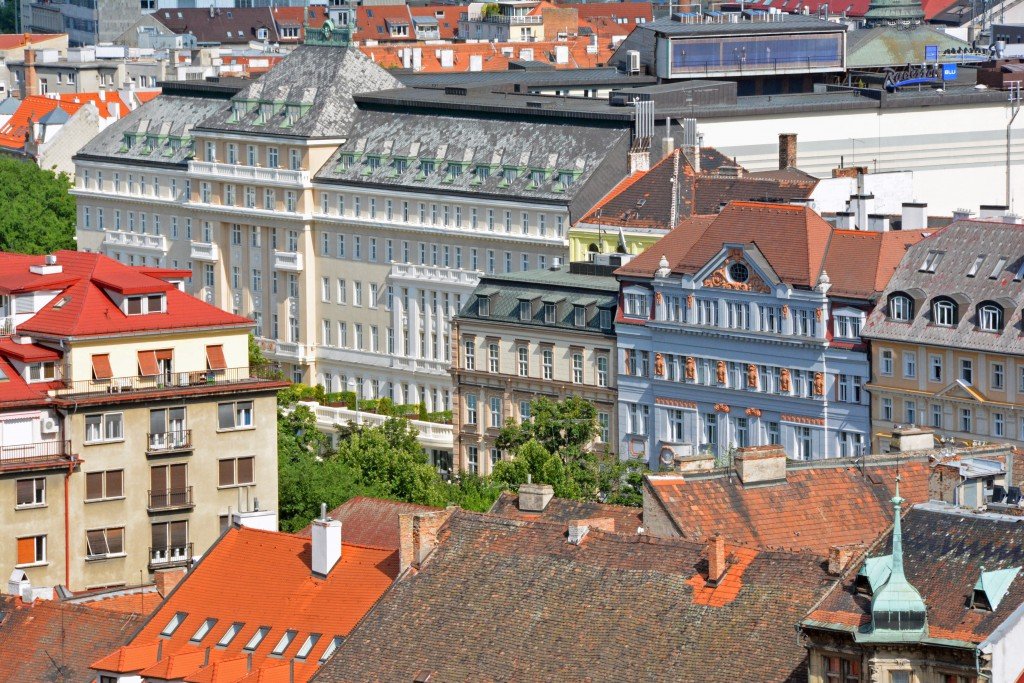 
Another good climb that will get you up and over the rooftops in Bratislava is a visit to the Slavín War Memorial. 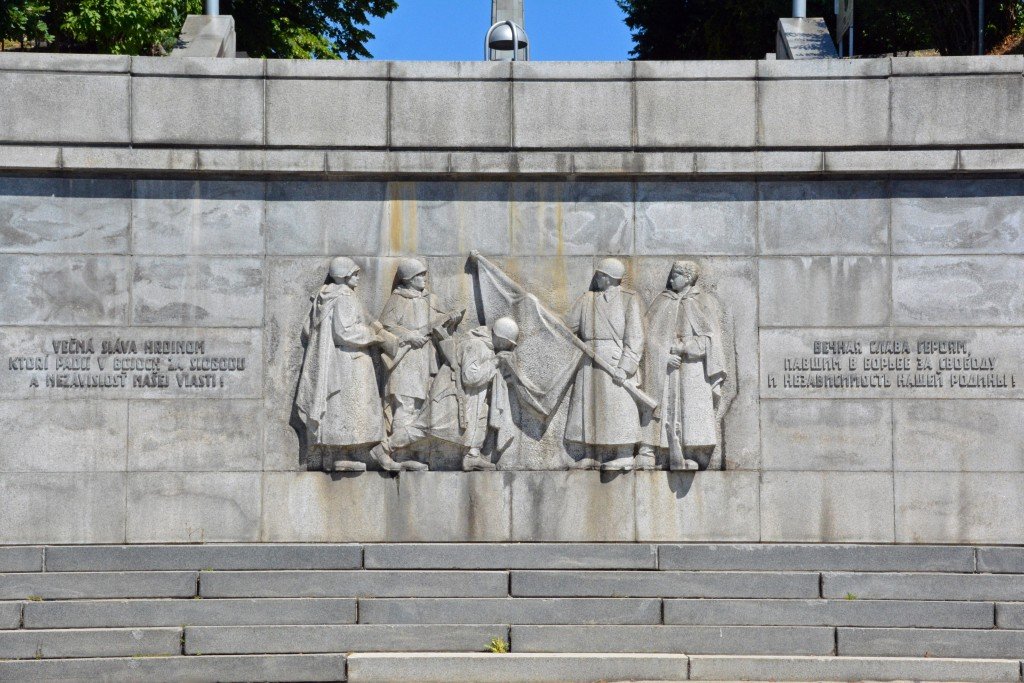 This memorial is dedicated to the Soviet Army soldiers who were killed in WWII while liberating the city (April 1945) from the occupying German Wehrmacht units. 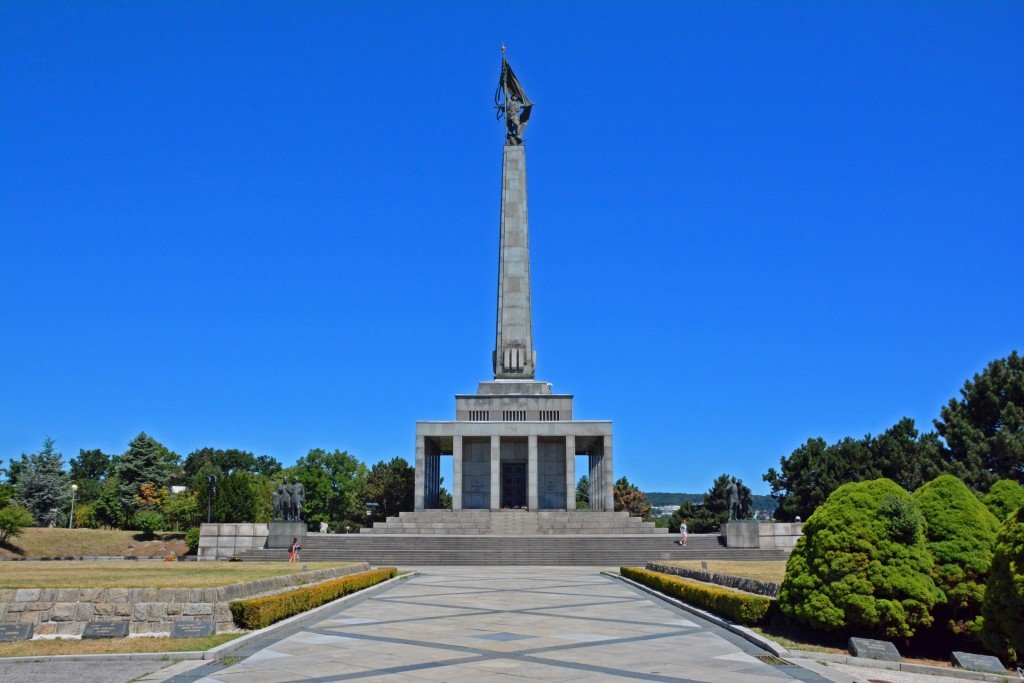 Close to 7,000 soldiers are buried in the adjacent military cemetery. 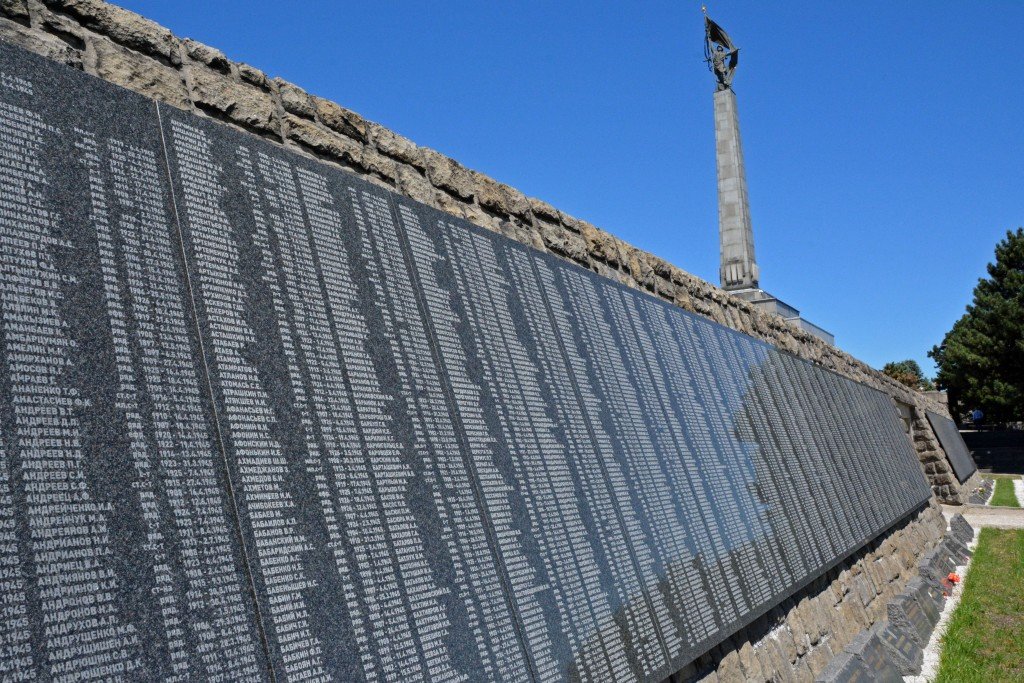 It’s a sobering remembrance of the price paid for the country’s liberation from the German Armed Forces. 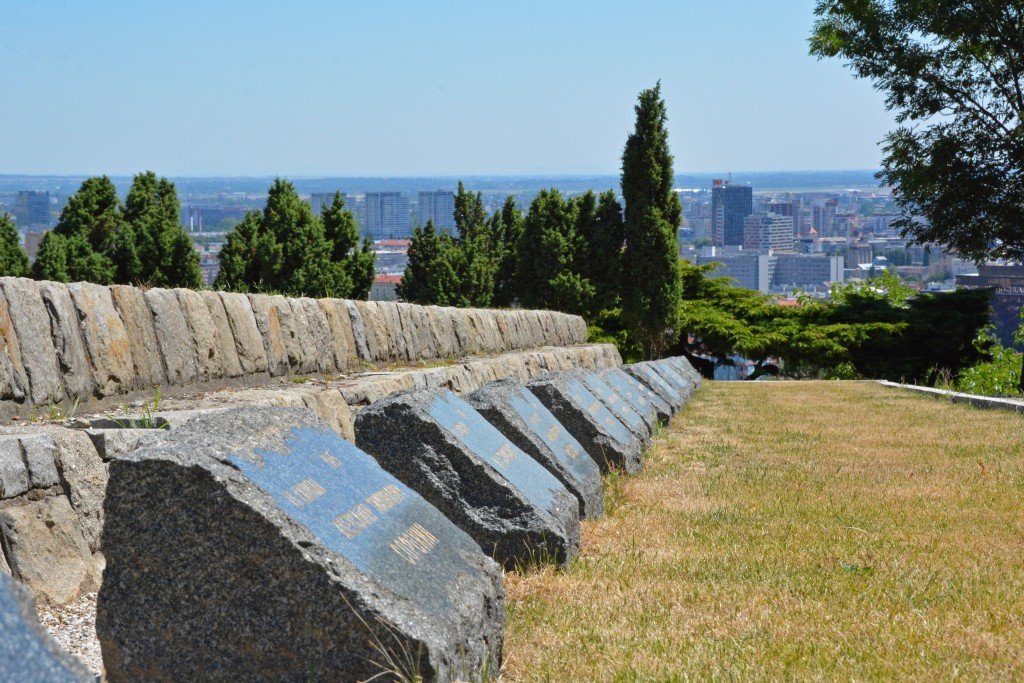 After taking a peaceful stroll though the memorial grounds, enjoy the pleasant views of the city below. 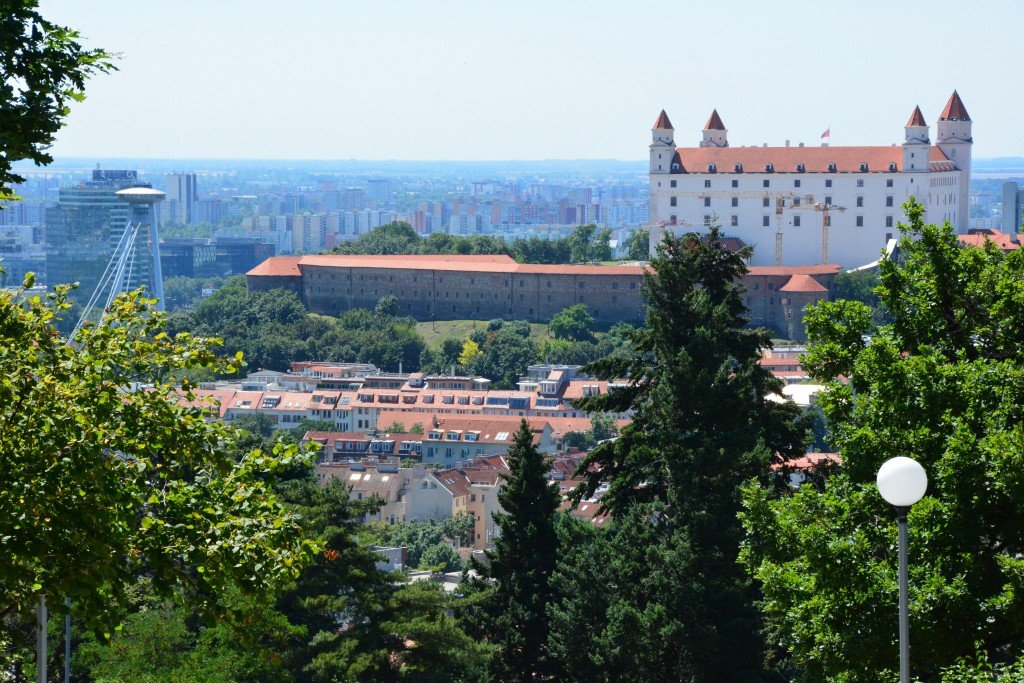 So, again, while Bratislava’s city centre is relatively flat, there are plenty of attractions, monuments, and outlying hills to get you above the rooftops for scenic city views!