Piran Slovenia: A Colorful Little Town Along the Slovenia Coast

Slovenia isn’t typically a country most people think of when they think of beautiful Mediterranean coastline and beaches. While visiting the capital city of Ljubljana, we realized the Slovene Riviera was just over an hour away, so we decided to take a little day trip to Piran Slovenia. 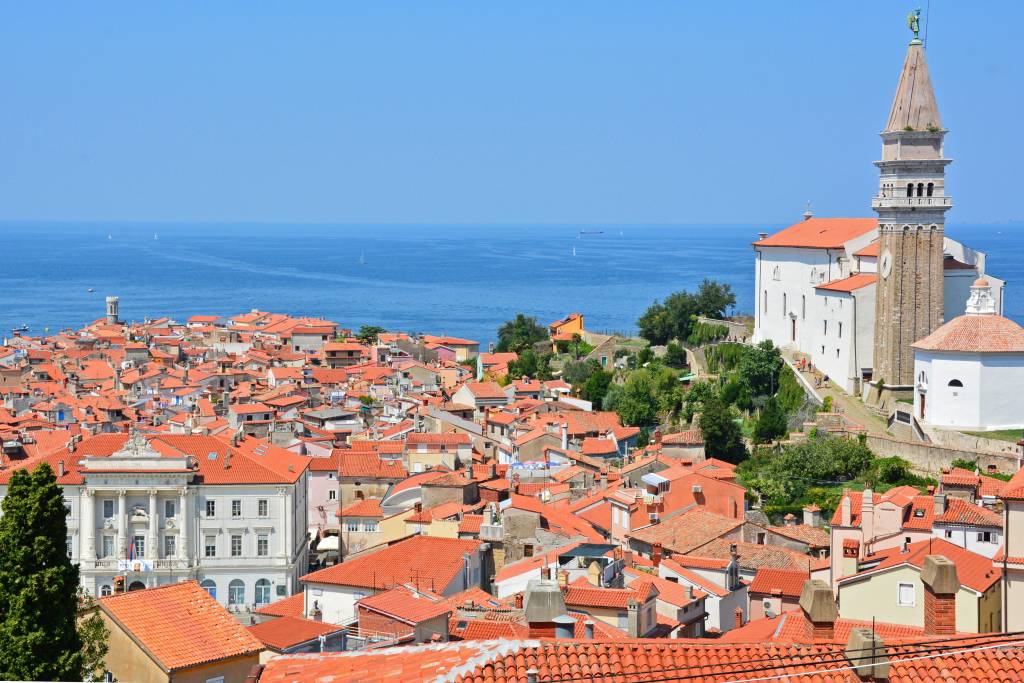 Slovenia’s sliver of coastline is nestled between Italy to the north and Croatia to the south, on the Gulf of Trieste, by the Adriatic Sea. The Slovene coastline is only 29 miles (46.6 km) long. The port town of Piran is one of three major towns of Slovenian Istria and the only one we visited on our day trip from Ljubljana. 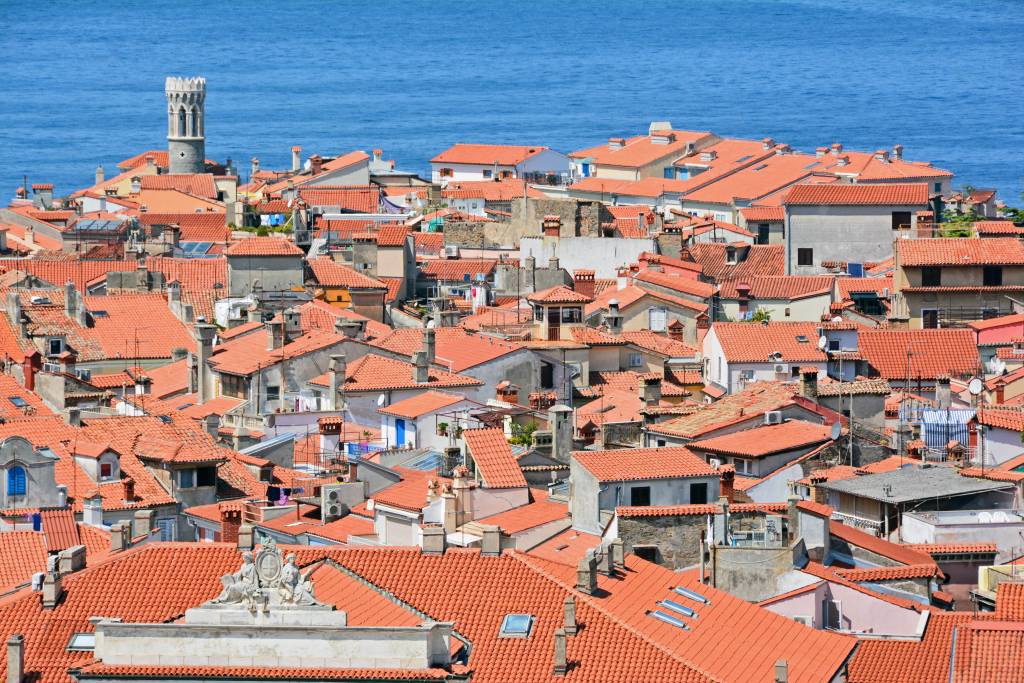 An exhilarating climb to the bell tower at the Church of St George offers outstanding panoramic views of the peninsula. The cost is only 1 Euro, but just be warned, the wooden stairs are a little rickety which made for a slightly nerve-wracking climb. Also beware that the bells ring loudly on the hour. Sam almost needed a new pair of shorts when the bells chimed at 1 pm. 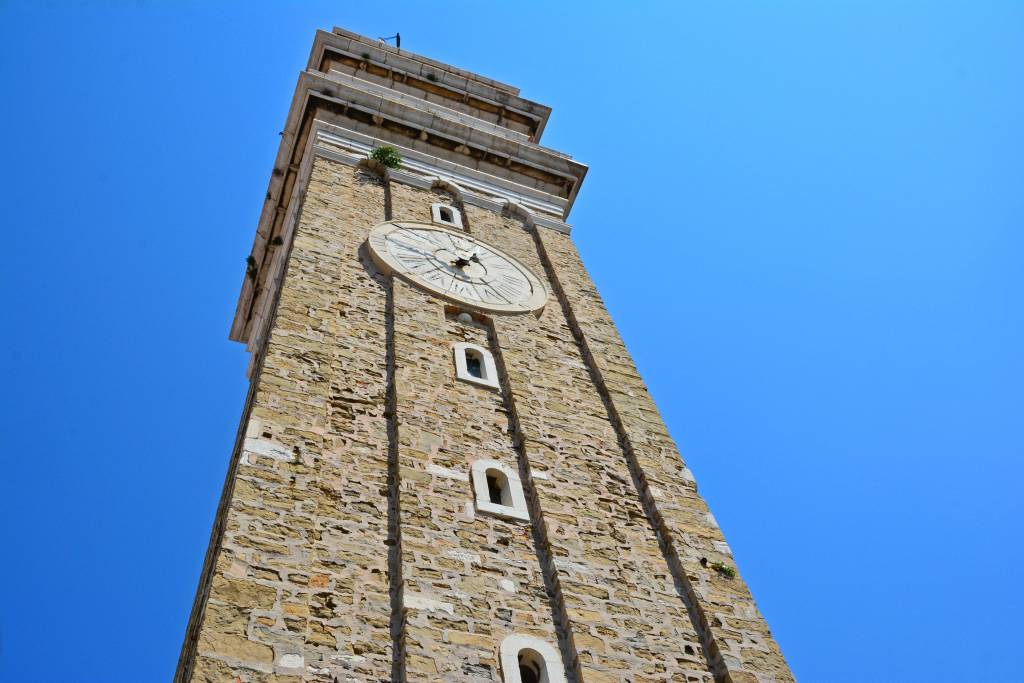 The water color is extraordinary with assorted shades of teal and turquoise pleasantly contrasting the terracotta roofs. 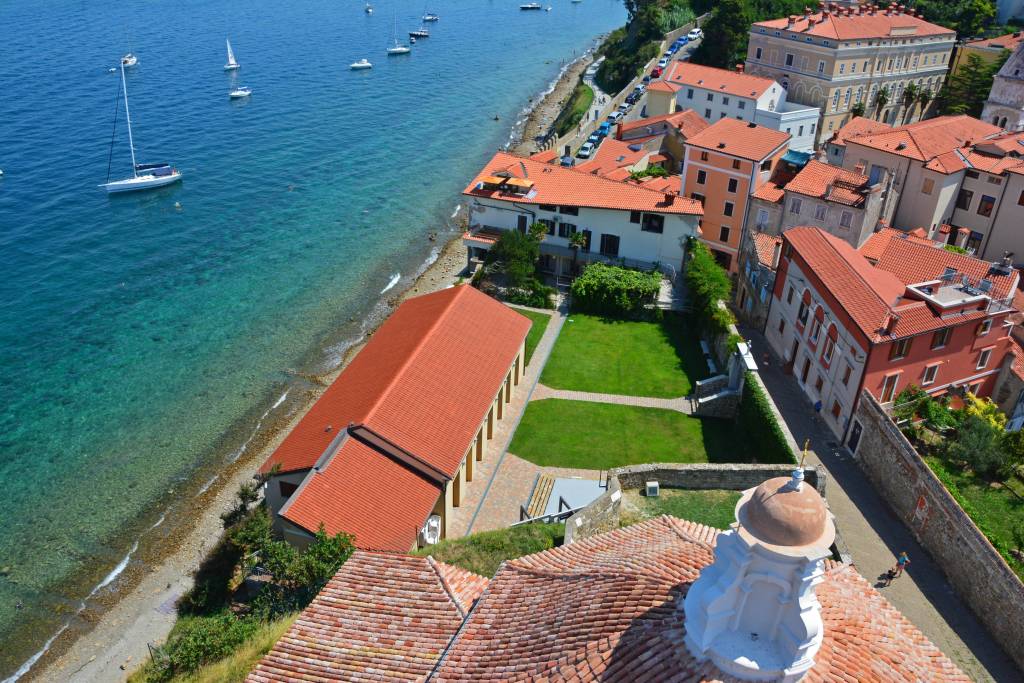 From the bell tower, you get an excellent view of Tartini Square and the small harbor just beyond. 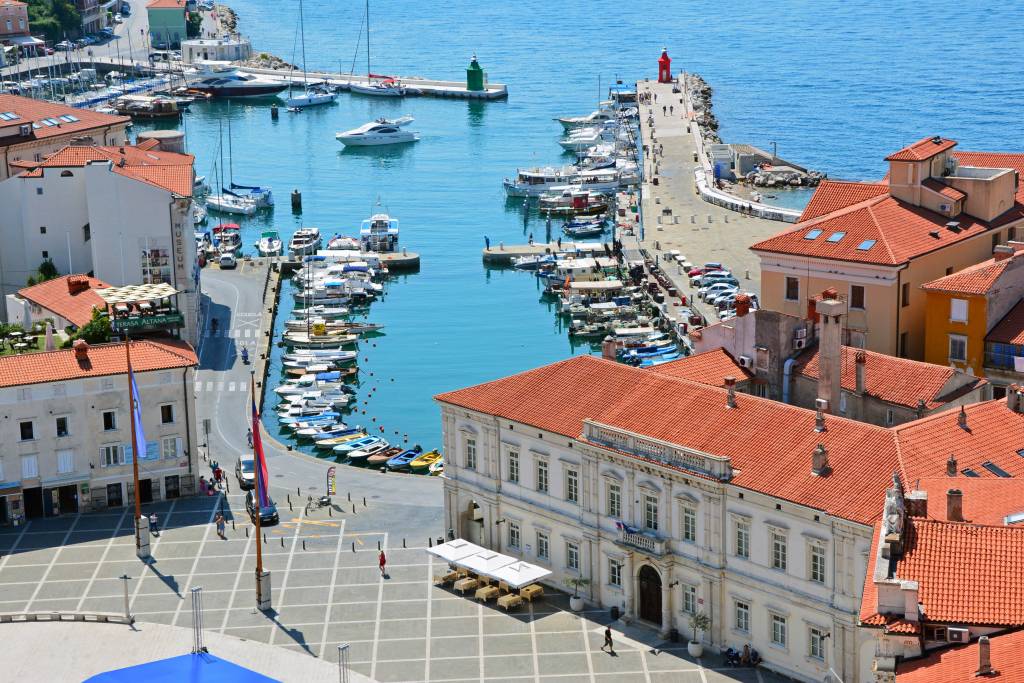 Near the harbor, you will find a lighthouse that was built in the 1800s, along with St. Clement’s Church. The church was originally built in the 13th century and modified in the 17th century. 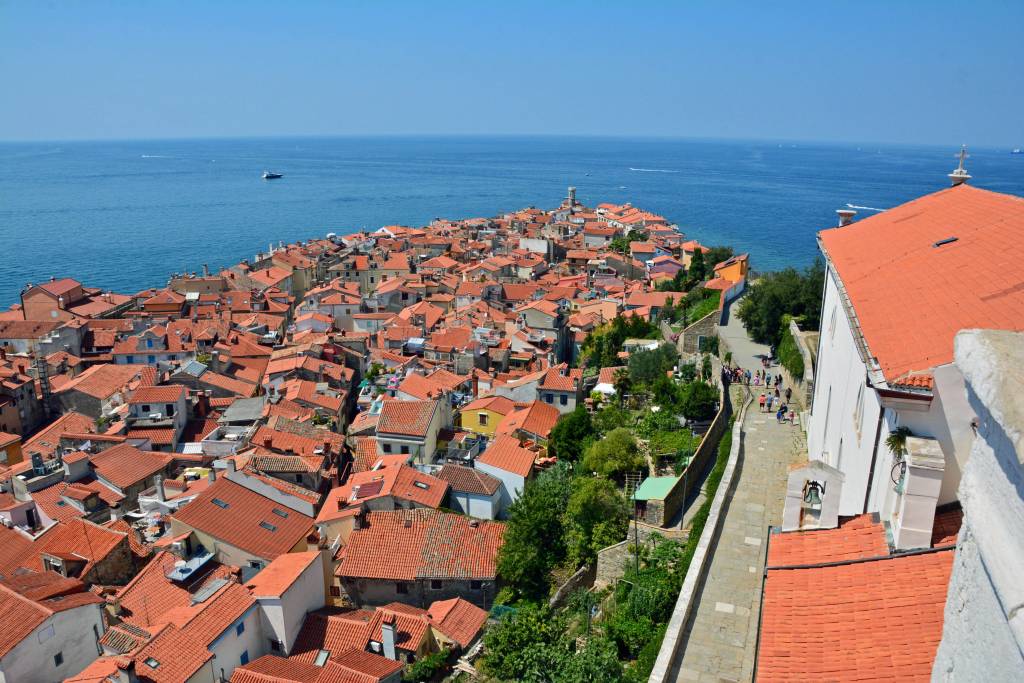 Once back down at sea level, stroll through the narrow Venetian Gothic alleyways and head into the main square. Tartini Square is named after the violinist and composer Giuseppe Tartini for whom a statue was erected in 1896. 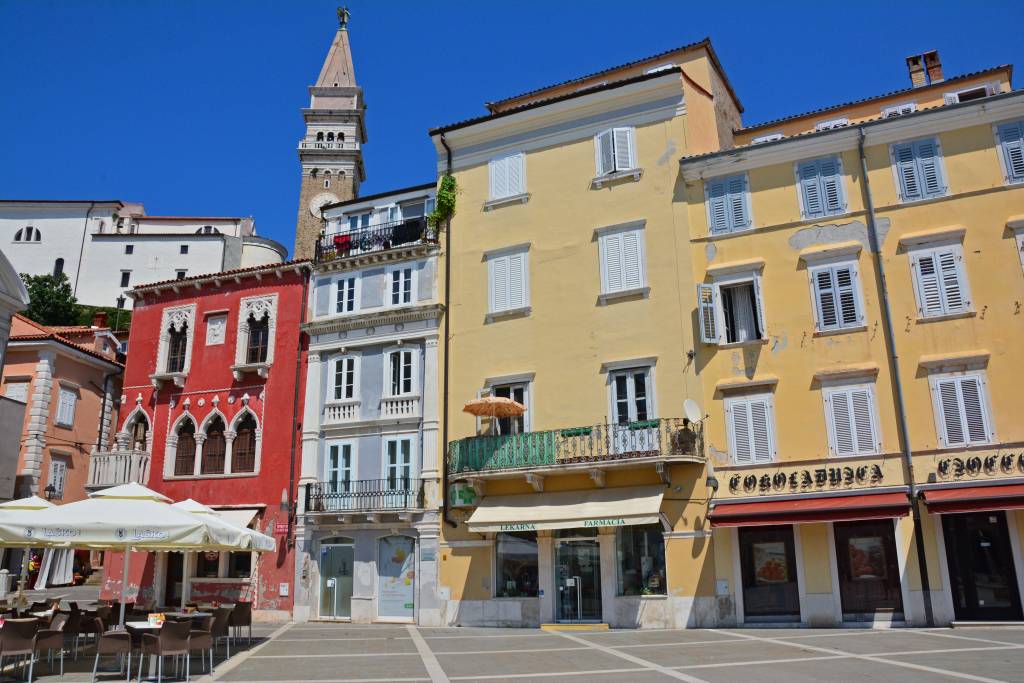 The square used to be a dock for smaller vessels such as fishing boats and was actually located outside of the city’s first walls. During the Middle Ages, the dock became surrounded by important buildings and palaces, making it an important site of the town. Town officials buried the dock in 1894 to put in what is now the largest and main square in Piran town. 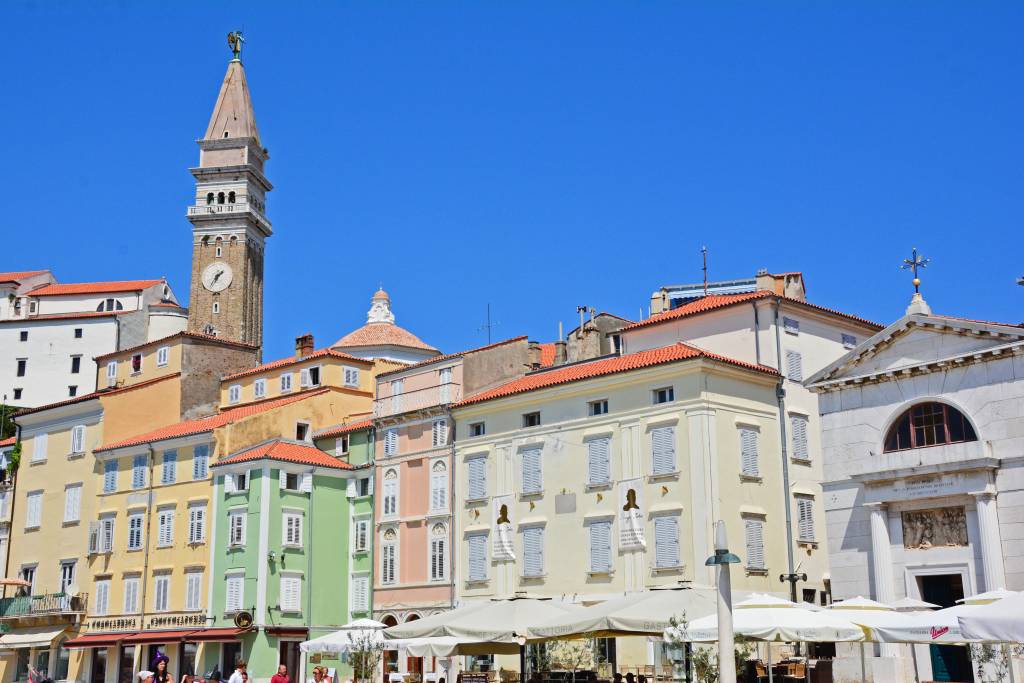 Restaurants and shops now line the square. During our visit there was a huge stage set up, probably for a concert or cultural event of some sort. 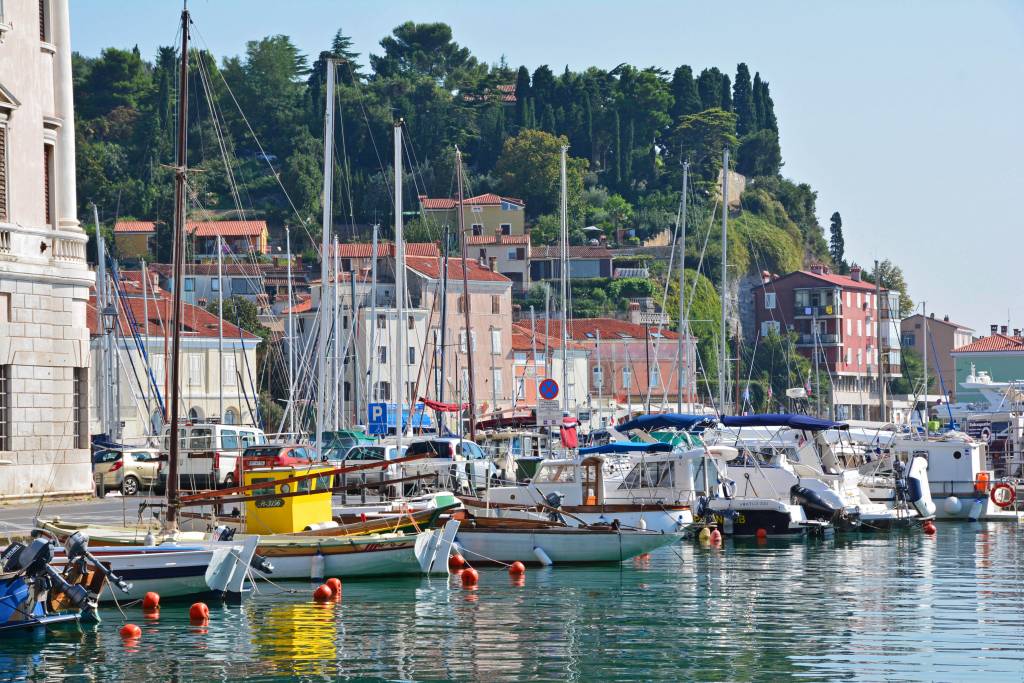 Though it was beyond hot in early August when we visited, we still enjoyed walking around this colorful and historic town. 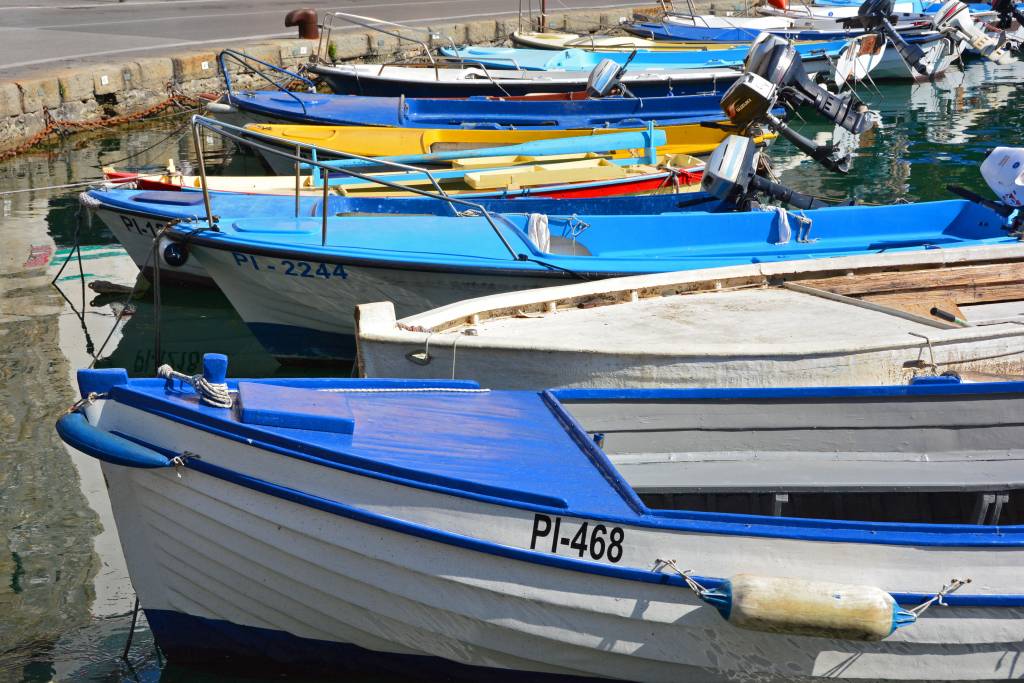 The narrow alleyways brought back fond memories of Cinque Terre in Italy. The crumbling houses with colorful shutters are quintessential of many of the Mediterranean sea towns! It certainly doesn’t matter if you get lost in these alleyways, as you’re only a few steps away from the sea on either side. 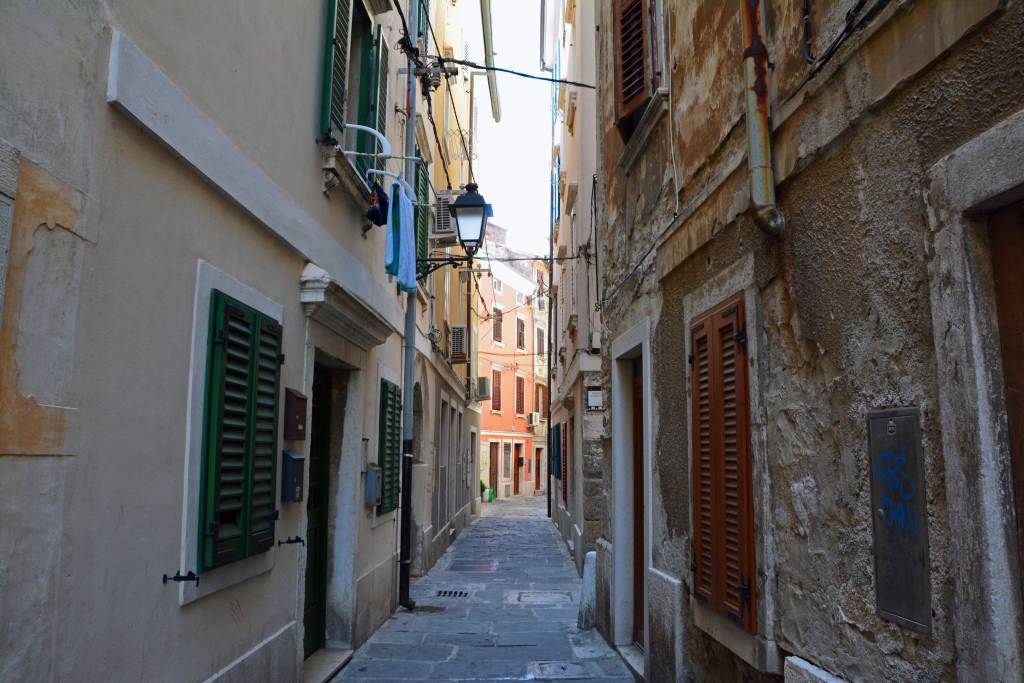 We emerged at the end of the alley-maze for a closeup view of the lighthouse and St. Clement’s Church. 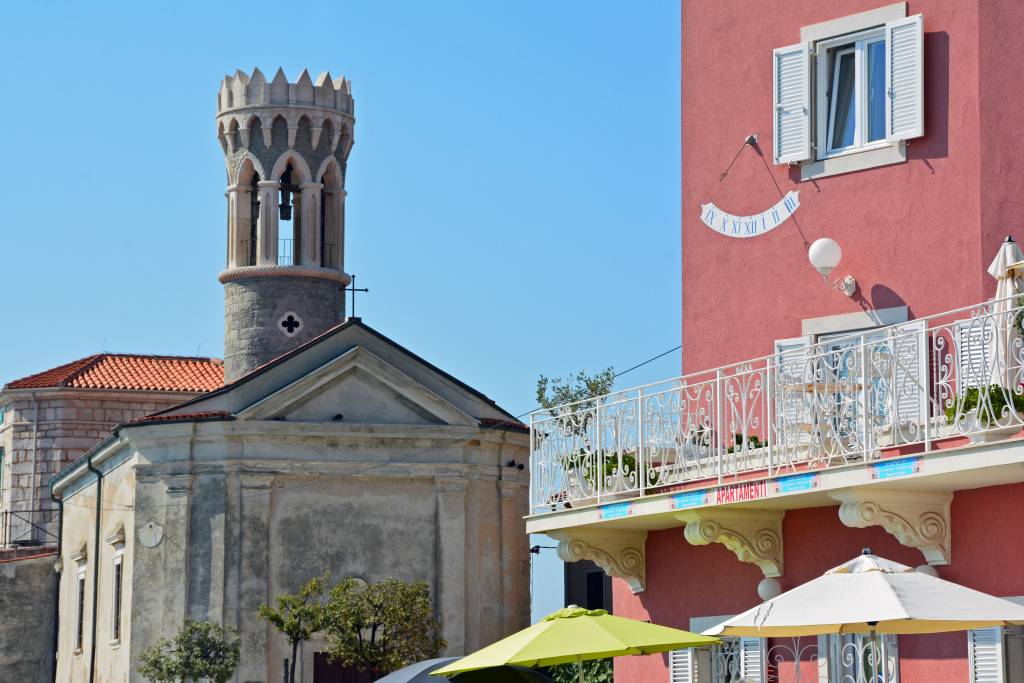 Because the town of Piran in Slovenia is located on a peninsula, it is almost completely surrounded by the sea, and on this ridiculously hot August day, the water couldn’t have looked any more inviting! 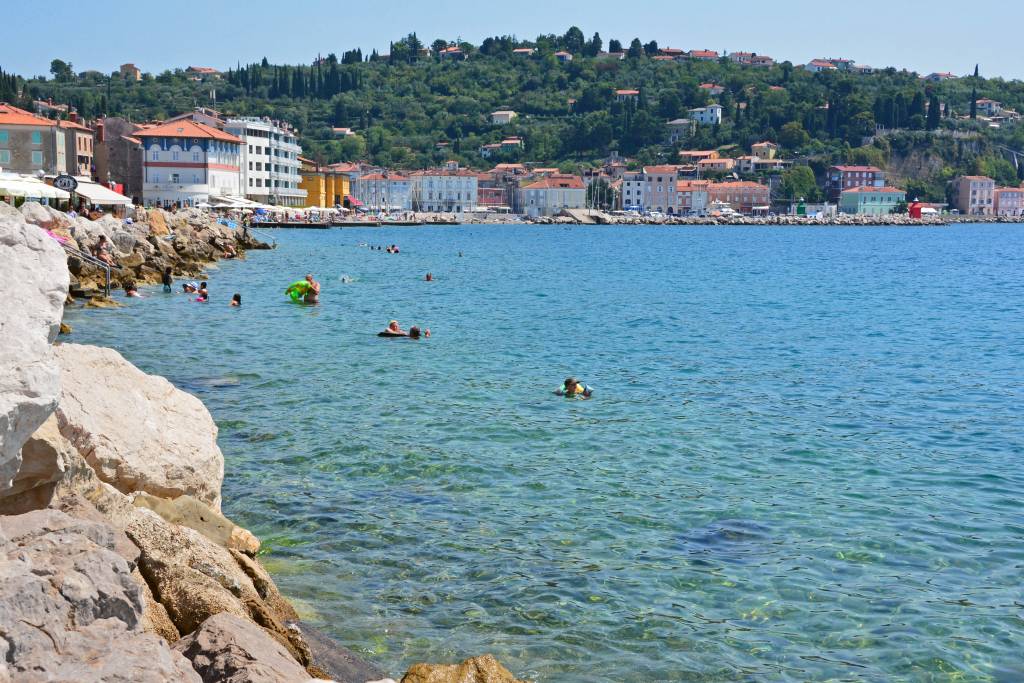 Though a little crowded at some junctures, there was plenty of the Adriatic enjoy! 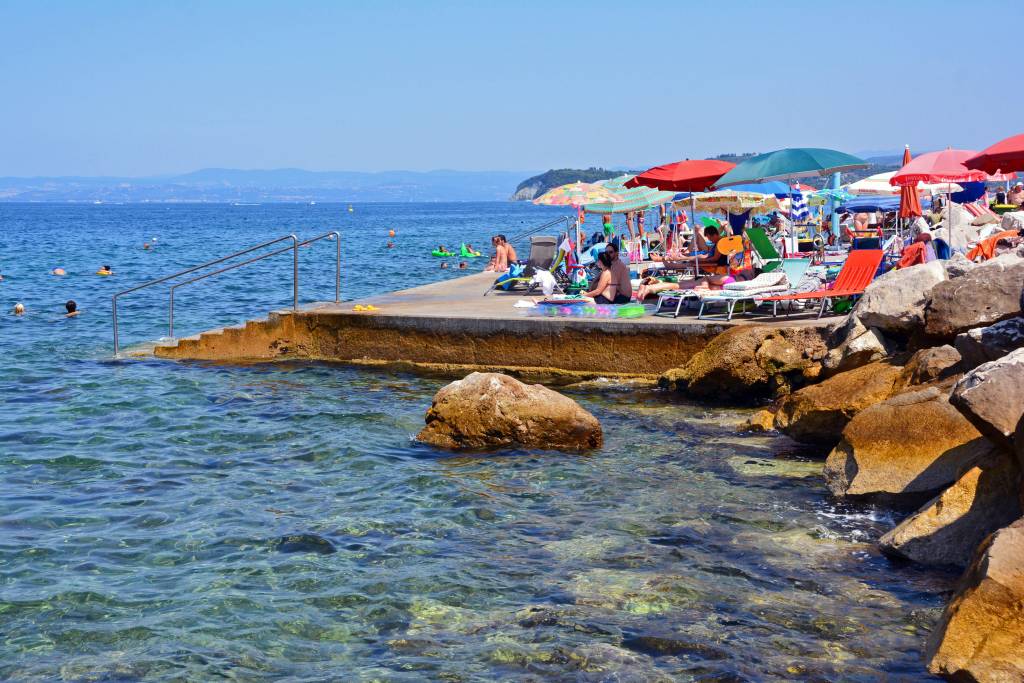 Be aware, there are some beaches (away from the crowded point) that are clothing-optional. It is not uncommon for women to be topless, even on the crowded beaches. Though on the nude beaches, you may find some individuals letting it all hang out. This is Europe after all! 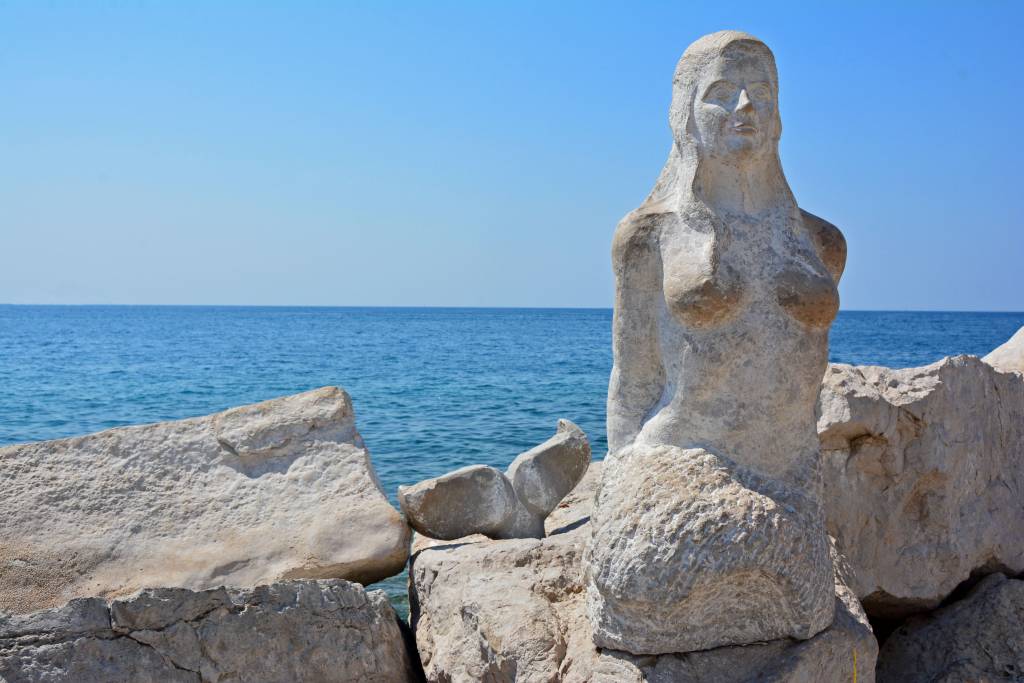 Just a few hours in Piran Slovenia was barely enough to see the highlights. We’d definitely recommend a longer stay, if you can. Otherwise, even if you take a short day trip to the Slovenia coast from Ljubljana like us, it’s definitely worth the visit! 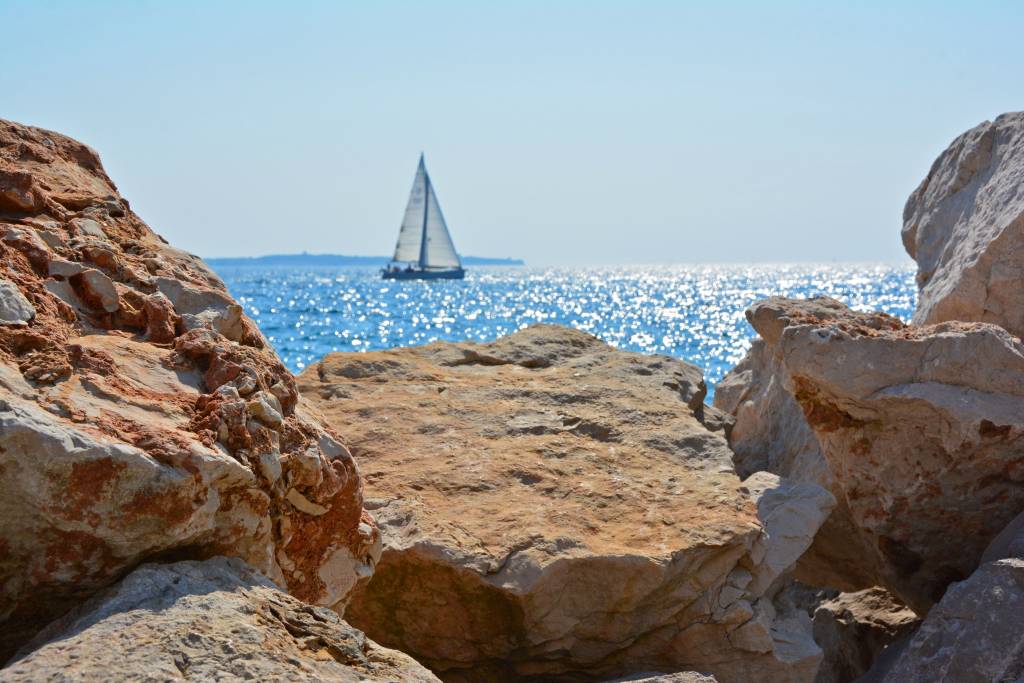 The Adriatic is calling… will you answer?! 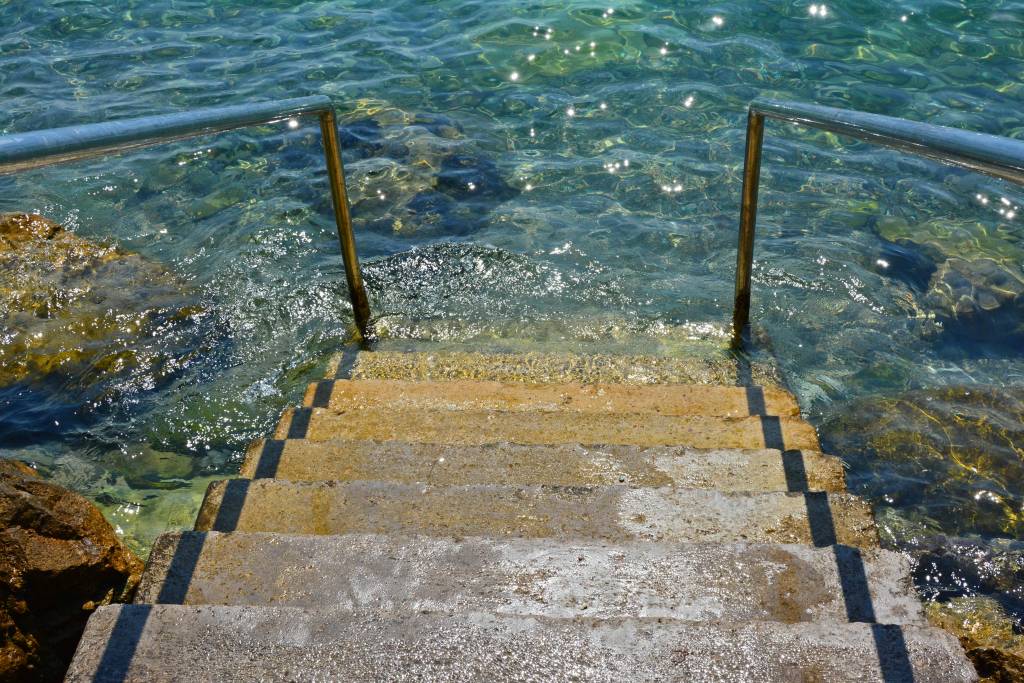