Things to Do on Whidbey Island

A few years back, we visited the Olympic Peninsula in Washington State and have been dying to get back to the Pacific Northwest ever since! There is so much to explore in this region of the U.S. and visiting just once, or even twice, isn’t nearly enough. During our most recent visit, we visited the San Juan Islands to fulfill a dream of seeing orcas in the wild. We explored both San Juan Island and Orcas Island before taking the ferry back to Anacortes on mainland Washington where we then drove south onto peaceful Whidbey Island. There’s so much to discover in the PNW, but for now, we’ll focus on fun things to do on Whidbey Island. 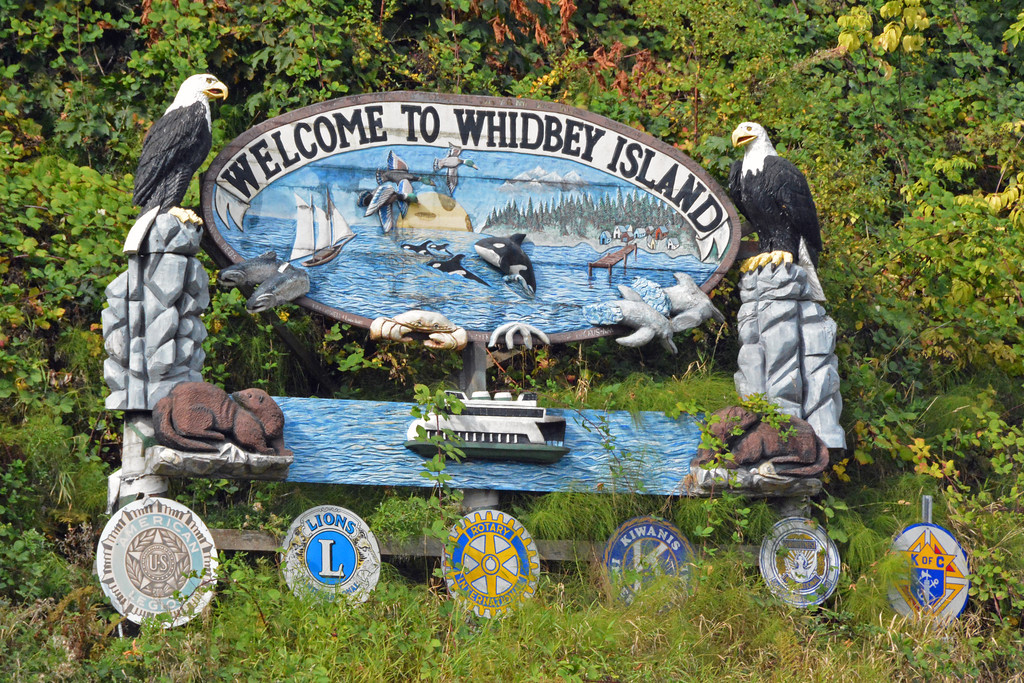 WATCH NOW: What to Do on Whidbey Island

Where is Whidbey Island?

First, let’s discover, where is Whidbey Island? Whidbey is one of many gorgeous islands in Washington State, located between the Olympic Peninsula and the western border of the state. It forms the northern boundary of Puget Sound, and although Whidbey is completely surrounded by water, you can drive onto the island from mainland Washington via the Deception Pass bridge near Anacortes. It’s part of the 440-mile Cascade Loop Scenic Highway, an epic road trip adventure in Washington State! 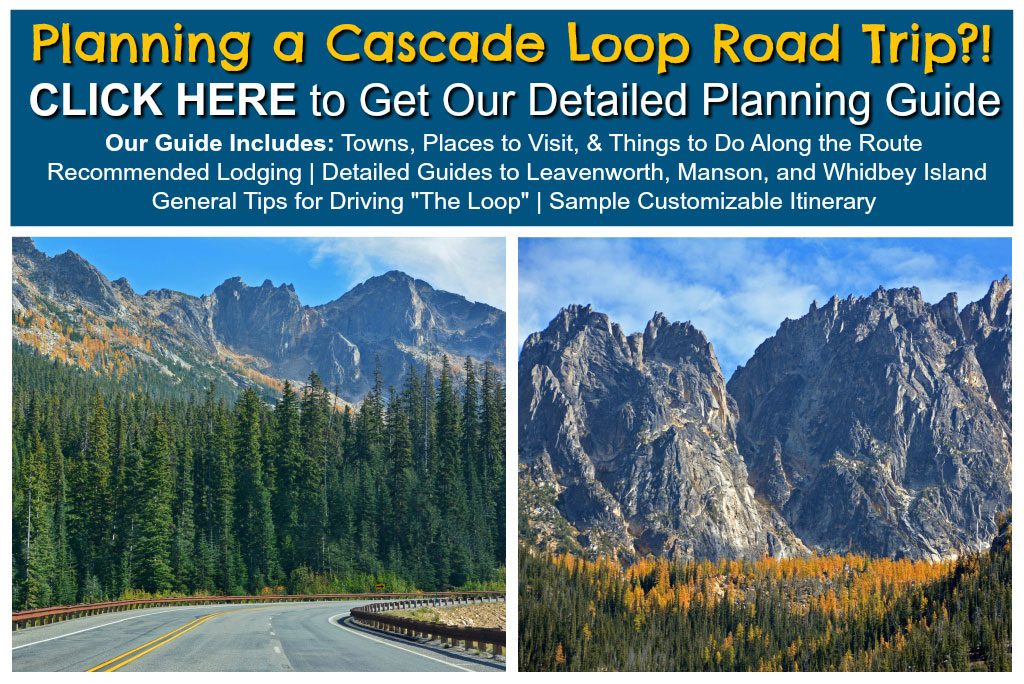 It is also possible to take a 35-minute ferry ride on the Whidbey Island Ferry from Port Townsend (Olympic Peninsula) to the town of Coupeville. If you were to come directly from Seattle to Whidbey Island, it’s less than an hour’s drive to Mukilteo where you would catch a 30-minute ferry to Clinton (South Whidbey Island). With all of these easy transportation options it’s no wonder why Whidbey (and its sister island, Camano) are considered to be “The Shortest Distance to Far Away“.

Things to Do on Whidbey Island

Though there are some great museums and shops to peruse on the island, you’ll probably want to spend a lot of your time in the great outdoors! We found the Whidbey Island weather to be quite pleasant during our late September visit, so most of what we did was outside.

For those traveling to Whidbey Island from mainland Washington, Deception Pass is the first stop! The iconic 1487-foot arched bridge spans the passage between Fidalgo and Whidbey islands and is one of the most photographed places in all of Washington State. Prior to the bridge being built (1935), passengers could only travel between the two islands via ferry boat operated by Washington’s first female ferry captain. Wander about Deception Pass and the nearby State Park, and see if you can spot military aircraft from the Whidbey Island Naval Station flying overhead!


The 17,000-acre reserve is the first historical reserve in the US, with the sea-side bluff trail as one of its main attractions. We found sunset to be a perfect time of day to visit this serene location. Also throughout the reserve, you will find numerous historic barns, homes, and blockhouses dating back to the mid-1800s. Ebey’s Landing is known as one of the best Whidbey Island hikes, so be sure to bring your walking shoes! 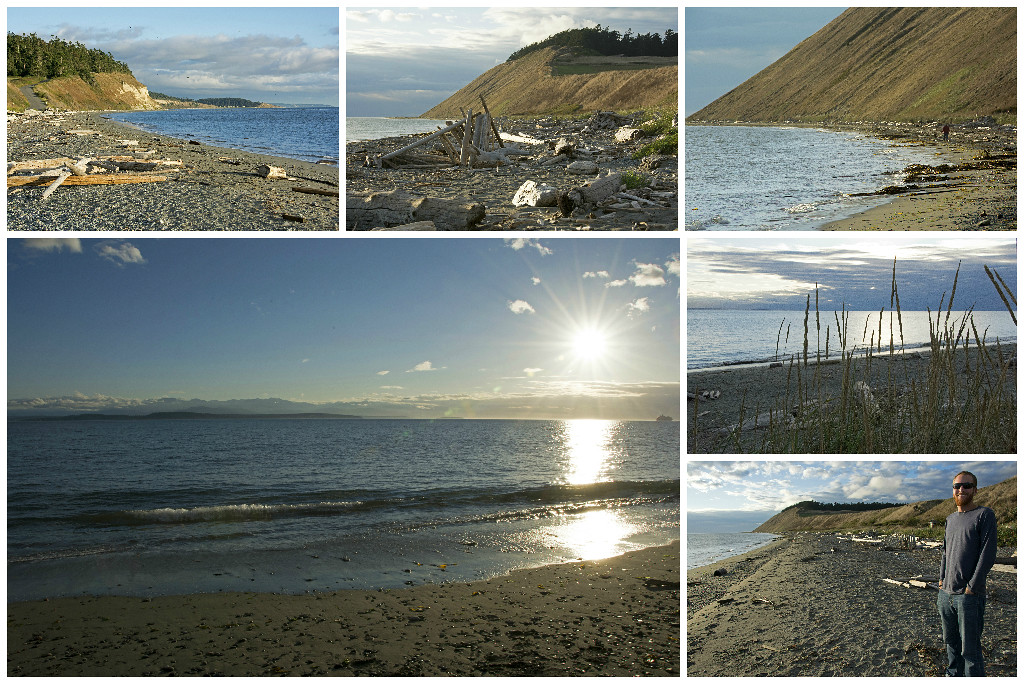 
To be on an island completely surrounded by water and not get out on the water, would just be wrong! Whidbey Island Kayaking in Langley offers a wide variety of tours for both beginner and experienced explorers alike. With Travis as our guide, we casually paddled along the coast spotting heron and kingfishers along the way. Once in the open water of the Salish Sea, views of Mt Baker and nearby Camano Island made for a glorious backdrop. Going on a kayaking trip is what we would consider as one of the best things to do on Whidbey Island! 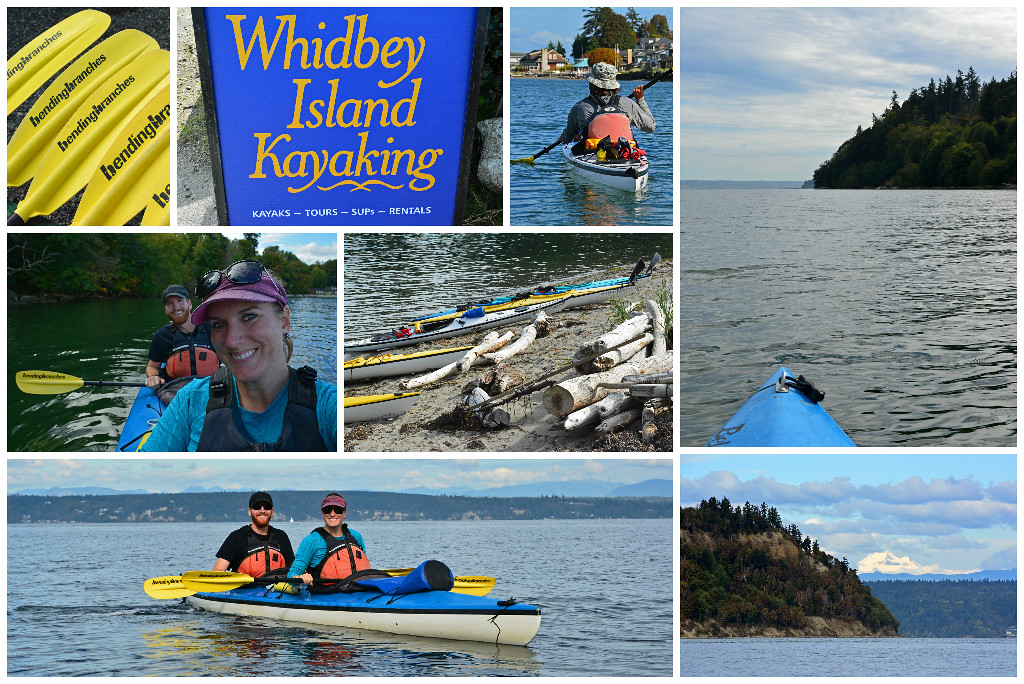 The Scenic Isle Way stretches almost the entire length of Whidbey Island: 54 miles from Deception Pass in the north down to Clinton in the south. It is the only scenic byway in the US that is completely on an island. The byway is part of the larger Cascade Loop, which circles 400+ miles around stunning landscapes in northwest Washington and it’s one of several scenic things to do on Whidbey Island. Getting around the island was a blast, as we were testing driving the all new Mazda CX-5 which turned out to be the perfect road-trip companion! Its SKYACTIV® technology is a unique engineering approach that provides a better driving experience with equally impressive EPA-estimated MPG. And of course satellite radio coupled with Bose speakers makes for a super fun ride! Taking a drive on the scenic byway is one of many popular Whidbey Island activities. 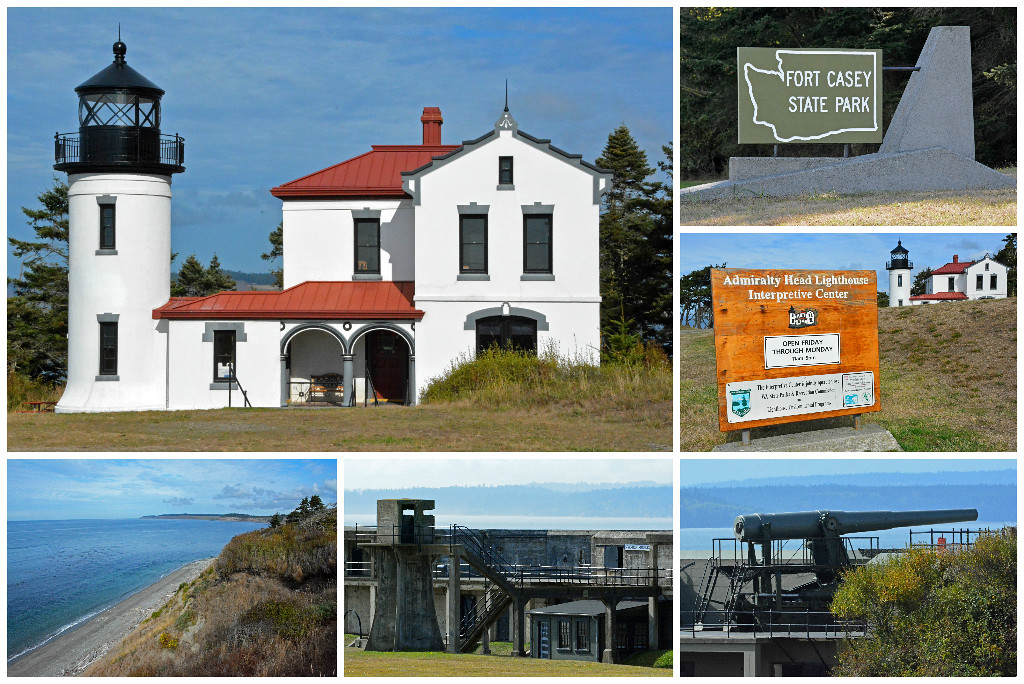 Greenbank Farm is found on the narrowest part of the island and is a must-stop along the Whidbey Scenic Isle Way. Here you can watch for birds, wander along hiking trails, admire the solar garden, and stroll among flowers. Visit the cheese shop and peruse several art galleries. Within the barn building, built in 1904, enjoy a slice of famous Whidbey pie and sample an array of delicious local wines. It is here where we sampled an phenomenal Chardonnay by Blooms Winery. 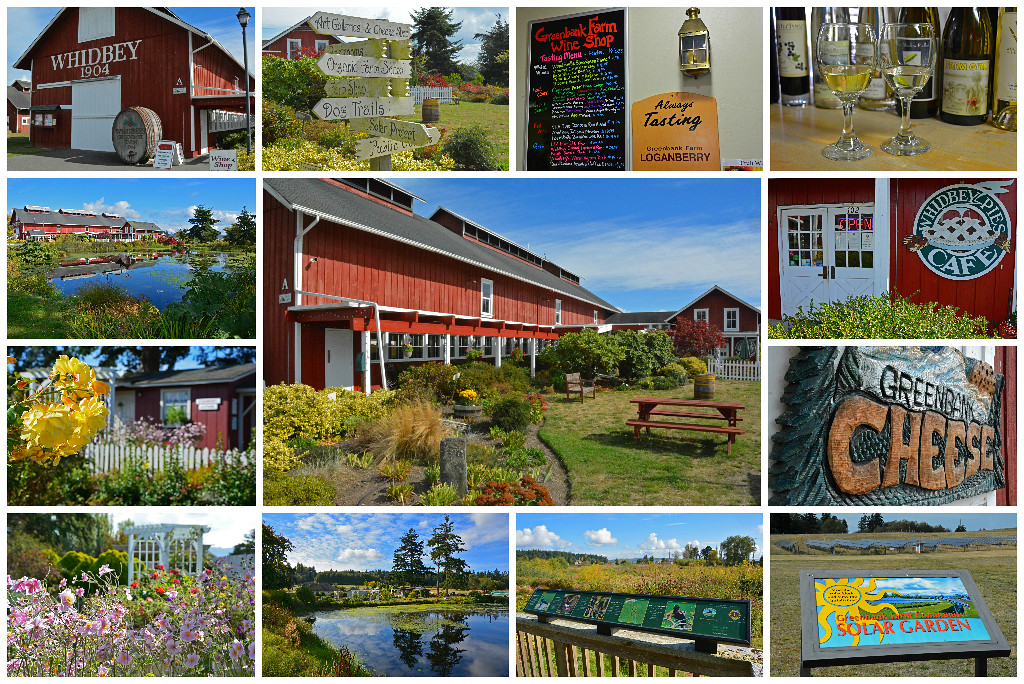 Since we fell in love with the Chardonnay during our visit to Greenbank Farm, we had to make a special visit to the Blooms Winery tasting room in Langley in order to try a wider variety of their wines. Never have we ever been to a winery where we were blown away by every single wine we sampled… until we visited Blooms. Their name is so appropriate, as the flavor of their award-winning wine blooms in your mouth just a few seconds after your initial sip. Their white wine varieties are exquisite! 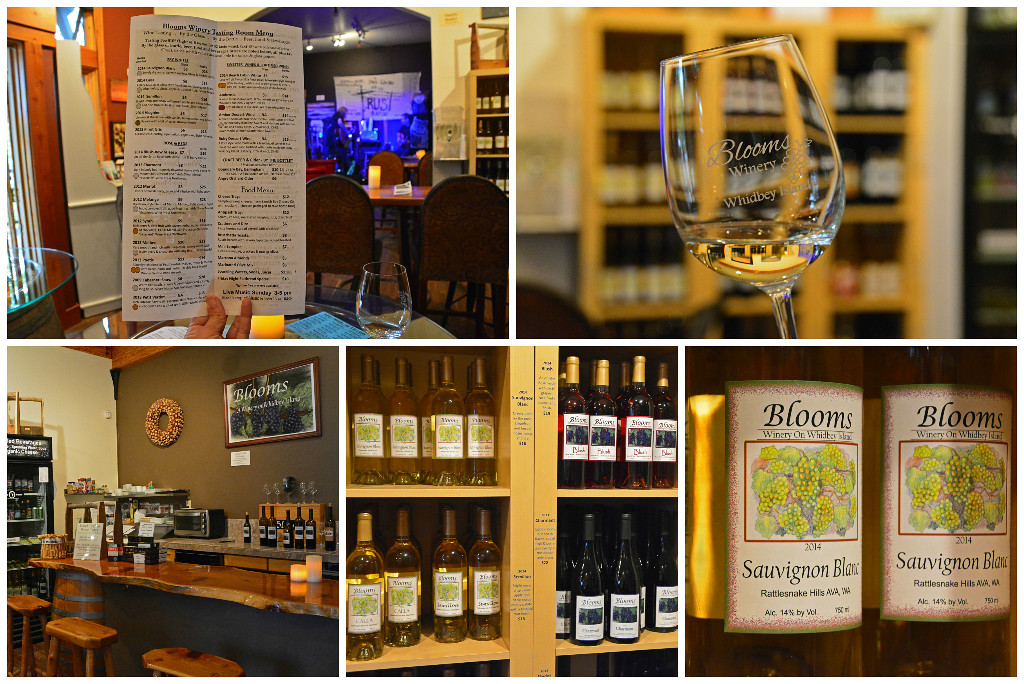 Orchard Kitchen: One of the Freshest Whidbey Island Restaurants

Dining out is fun, but seeing how your meal is prepared makes for a much more memorable evening! The staff at Orchard Kitchen sure know how to throw one heck of a dinner party and they do it every weekend! Seating is very limited, so book well in advance for this incredible farm-to-table dining experience. This amazing multi-course meal features a selection of organic food straight from Chef Vincent’s personal garden, along with carefully selected foods from other local farmers and producers. Vincent’s wife, Tyla, has a rich knowledge of wine and knows just what wines to pair with the evening’s featured menu items. Trust us, it’s a meal you’ll continue craving long after the last bite. 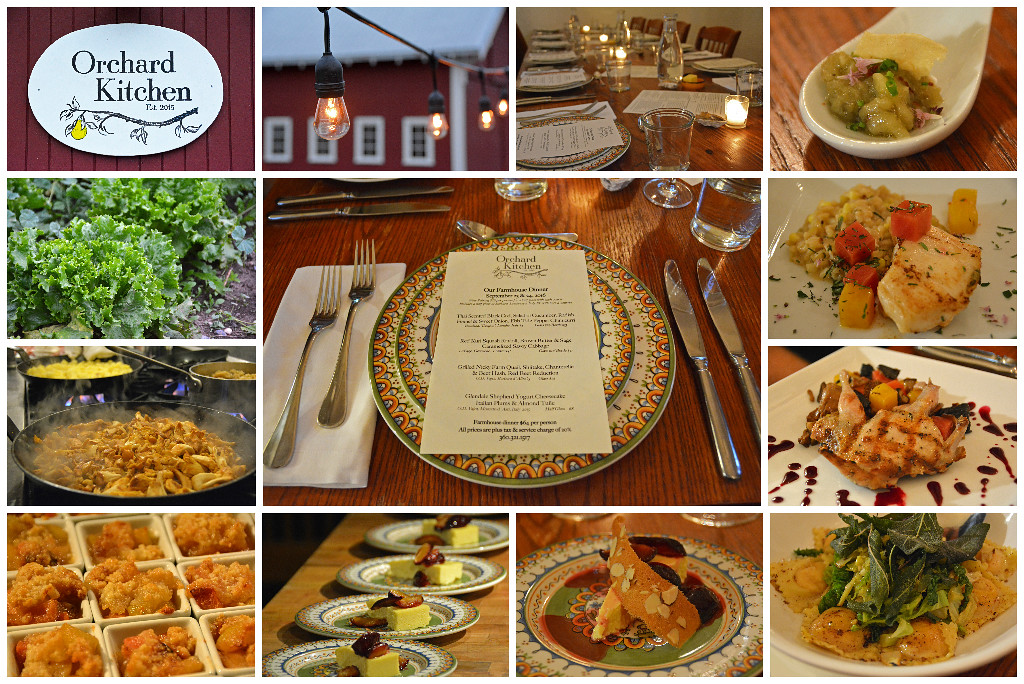 Enjoy a Pint at the Penn Cove Brewery

Penn Cove Brewery had only been open for a few months when we visited, though it’s clear to us that they’re not going anywhere soon! They offer a great selection of brews to choose from, with several delicious in-house and local beers (and ciders) options on tap. We found the food options left something to be desired, but we’d definitely recommend you stop in for drink or two when in Coupeville. They have a full calendar of events, offering live music numerous times throughout the week. 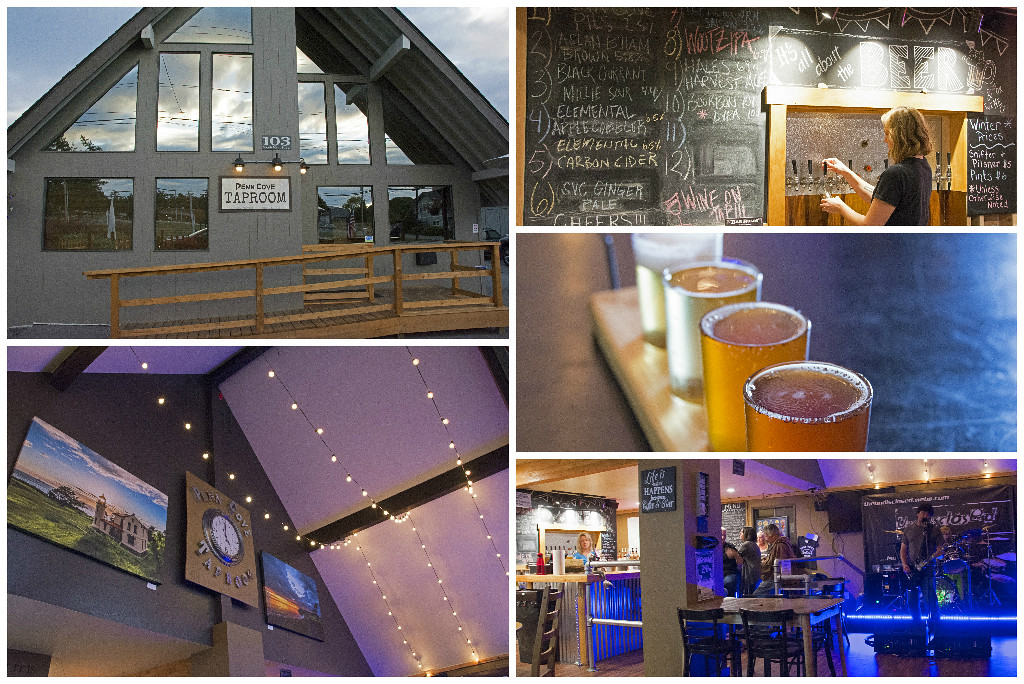 The Coupeville Farmer’s Market is open 10 am – 2 pm on Saturdays from the beginning of April to the middle of October. Located next to the Coupeville Library, this market offers a wide variety of fruits, vegetables, handmade arts and crafts, and delicious kettle corn! 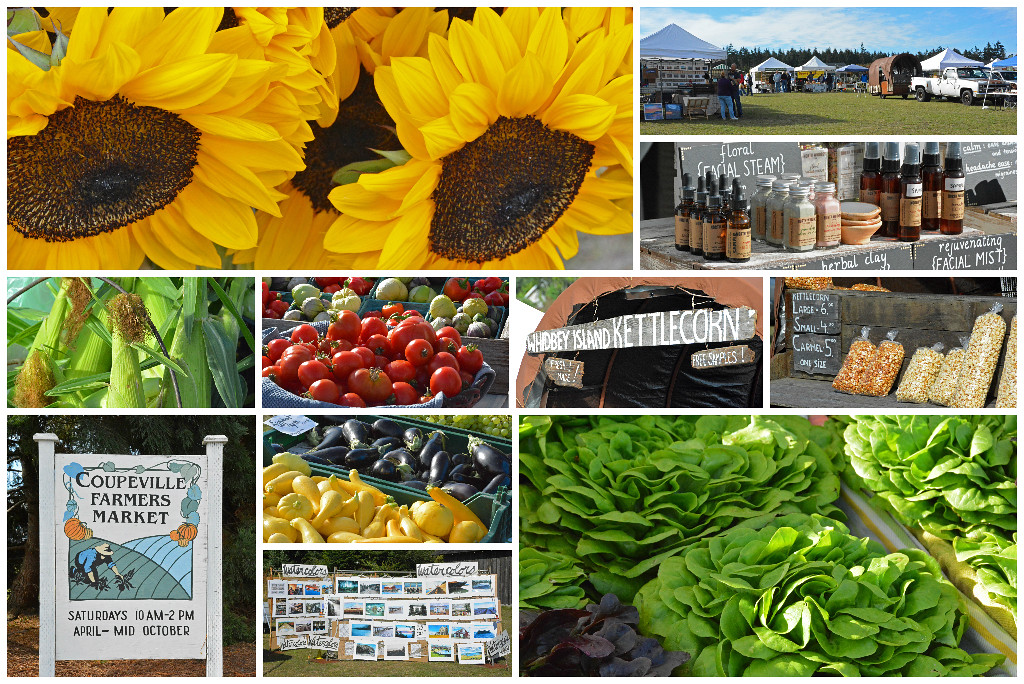 The Bayview Farmer’s Market, located in Langley, offers an amazing selection of early-season produce and amazing hand-crafted artisan wares. Here you can also find live music and several food stalls. The market is an event in and of itself, running from late April to late October on Saturdays from 10 am – 2 pm. 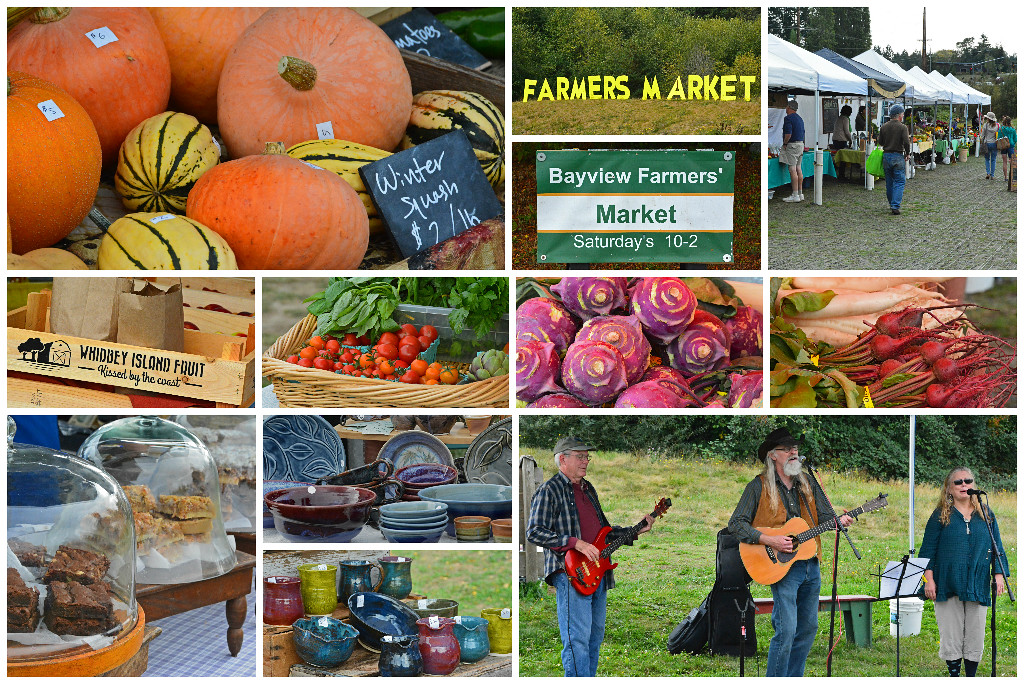 Langley: The Village by the Sea

Known as the “Village by the Sea”, the charming sea-side town of Langley overlooks the Saratoga Passage and Cascade Mountains. 1st & 2nd Streets are lined with boutique shops and quaint restaurants. Visit the recently opened Langley Whale Center to learn more about the gray whales and resident orcas found in the waters near Whidbey Island. Stop by Double Bluff Brewery, Whidbey’s first brewery, to sample some of their delicious craft beer or duck into Kalakala Mercantile Co. for a collaborative evening acoustic jam session out back. Another unique stop in Langley is Callahan’s Firehouse, a glass gallery and hotshop, located right next to the delicious Useless Bay Coffee. 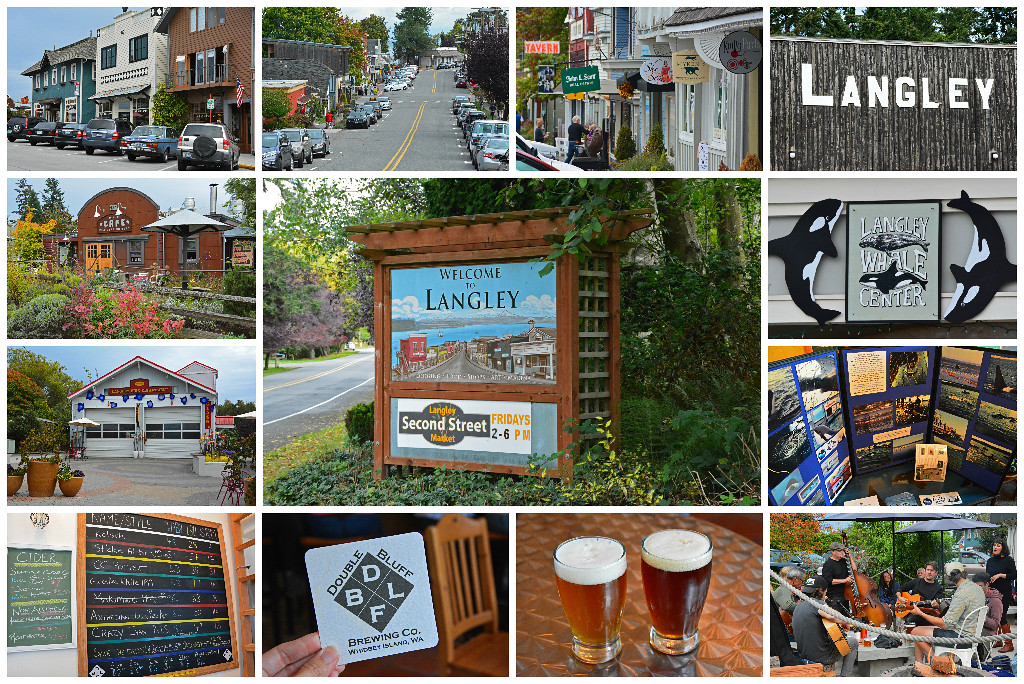 Coupeville is the oldest town on Whidbey Island and the second oldest town in all of Washington state. Historic 19th-century buildings now house specialty shops, eclectic restaurants, and fine art galleries along Front Street. Be sure to stop by Knead & Feed for a delicious (and humongous) cinnamon bun! 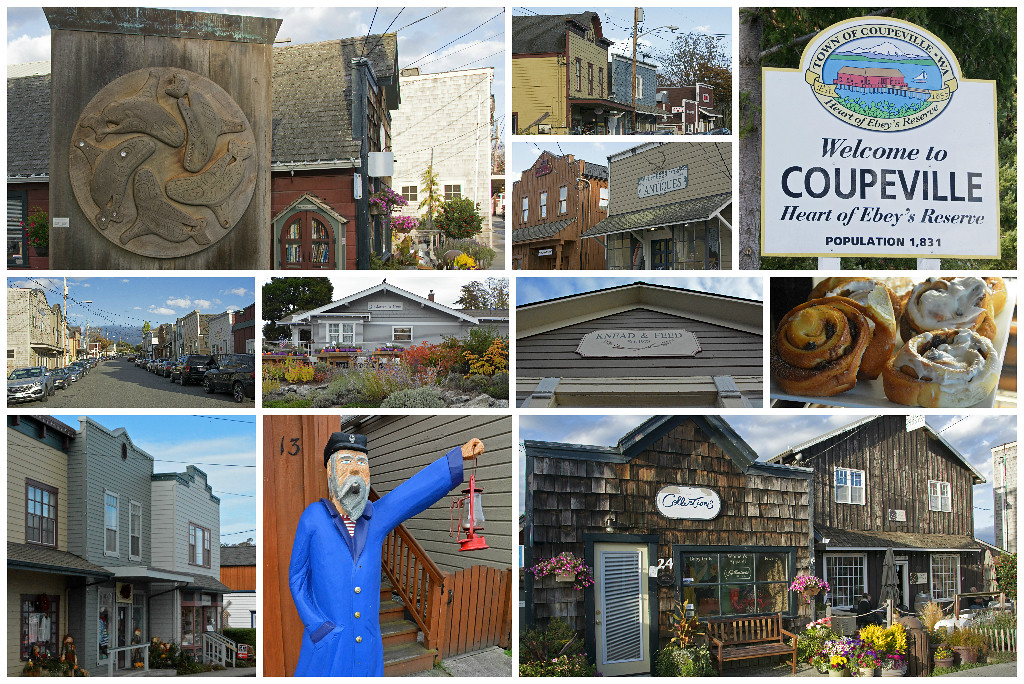 Of course, you simply can’t visit this small town without walking out to the 110+ year old wharf warehouse and dock. It’s probably the most popular of things to do in Coupeville WA. As the oldest surviving wharf in Puget Sound, it now houses a coffee shop, cafe, gift shop, and kayak rental, along with an educational marine life exhibit. As you walk along the pier, look down to the beach below to see the famous Penn Cove mussels. 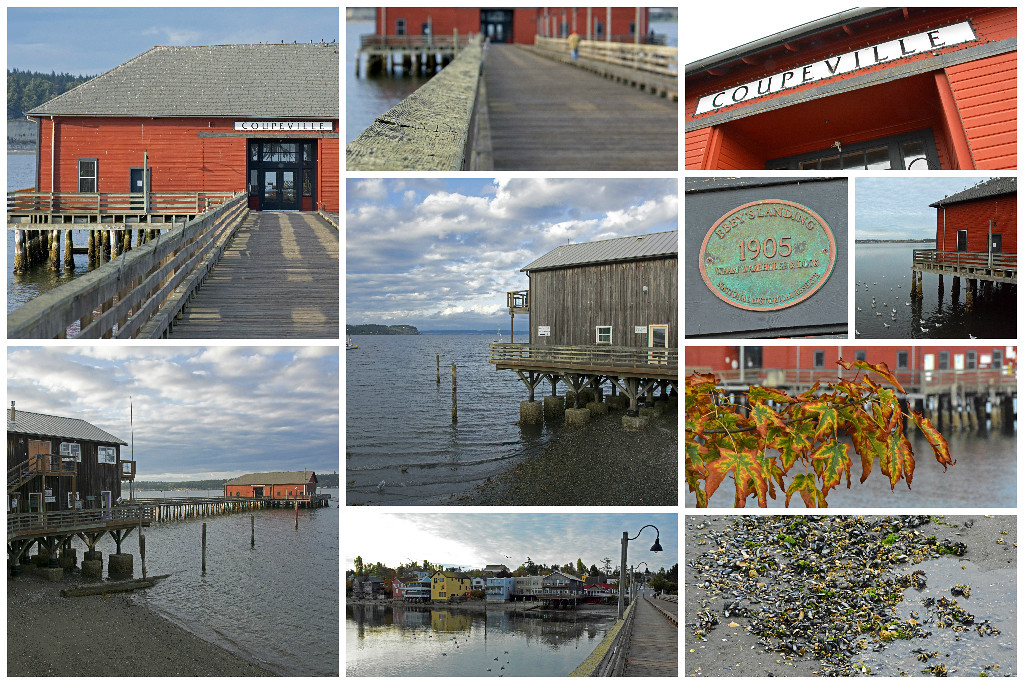 Oak Harbor is home to one of the top 3 rated Naval Air Stations in the country, and as Whidbey Island’s largest incorporated city, it isn’t exactly a small town. Forty-percent of Whidbey (and Camano) Islands’ population lives in the Dutch-inspired Oak Harbor, so if you’re looking for a small town feel within Oak Harbor, just head to the historic downtown district. There are many things to do in Oak Harbor downtown. Here you will find great shops, eateries, and wide sidewalks, perfect for strolling.

During our two-day stay on Whidbey, we enjoyed the comfort of the Garden Isle Cottages in Coupeville. Garden Isle offers two charming garden cottages, along with a three-bedroom home, set on two acres just a short walk from the historic downtown area. The cozy garden cottage was perfect for the two of us. ->Check Availability & Current Prices for Garden Isle Cottages<- The hot tub, private deck out back, and bench swing all provided the perfect atmosphere for relaxation during our stay. And to top it all off, the bed was ridiculously comfortable. All in all, it was a wonderful stay at Garden Isle Cottages, and while we obviously haven’t stayed everywhere on the island, we can almost guarantee it’s one of the best places to stay on Whidbey Island! 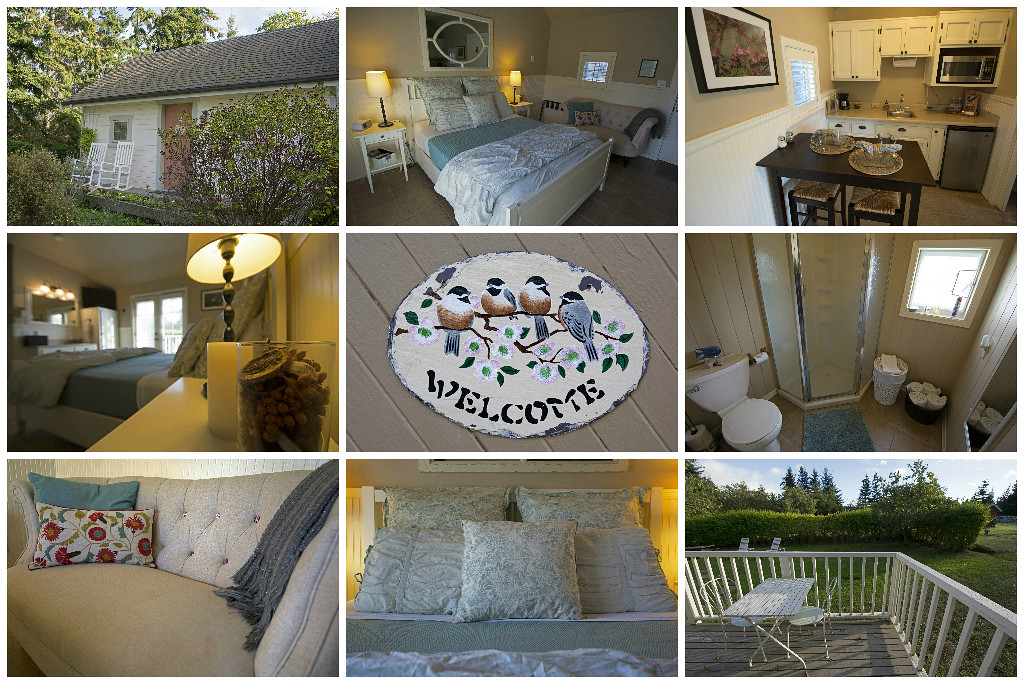 Hopefully we’ve convinced you to add this charming island to your list of places to visit. With plenty of unique things to do on Whidbey Island, it’s the perfect getaway for couples and families alike! Drive, bike, hike, kayak, swim, fish, scuba, wine, dine, explore, and discover  – all on Whidbey! Make it a prolonged stop on your journey along the Cascade Loop, couple it with a visit to the San Juan Islands, or simply make sure it’s a part of your next visit to the Pacific Northwest. Life seems to move a little slower on Whidbey, so if you’re looking for a relaxing getaway, start planning your visit to Whidbey now!

We’d like to thank the Whidbey & Camano Island Tourism, Whidbey Island Kayaking, Orchard Kitchen, & Penn Cove Brewery for providing us with support during our time on Whidbey Island. A special thanks to Garden Isle Cottages for providing accommodation and to Mazda for allowing us to test drive the all new CX-5. As always, all write-ups are an accurate reflection of the experiences we had. This post contains affiliate links, which simply means if you click on one of our links, we may receive a small fee, at no additional cost to you.


For a complete look at our drive along the Cascade Loop Scenic Highway, check out our video: