Just a short drive from Barcelona is the stunning region of Costa Brava, Spain. With beautiful views and unique history found throughout the region, there are several Costa Brava towns you’ll want to add to your Spain itinerary! This, of course, is not an exhaustive list of all of the Costa Brava towns, but it’s at least a start to get you planning!

The sun was out in full force and rays of sunshine glittered atop the azure Mediterranean sea, as we caught our first glimpse of the coast in Costa Brava. Gentle waves lapped against the rugged shore below while a light, dry breeze from the sea swept through our hair. We stood atop castle ruins on a rocky cliff with the vast sea on one side and a charming medieval town on the other. This was the first of several Costa Brava towns we visited during our week long stay in this spectacular region.

Tossa de Mar is located halfway between Barcelona and the French Border. If traveling from Barcelona, it’s one of the region’s first towns you’ll come upon. Even though Tossa de Mar wasn’t a planned stop on our Costa Brava itinerary, we simply couldn’t miss the opportunity to see a castle on the beach! Around the 12th century, this medieval town was walled off and a castle was built upon Mt. Guardí, the town’s highest point. Parts of the castle still remain and visitors are welcome to explore its prevailing ruins. 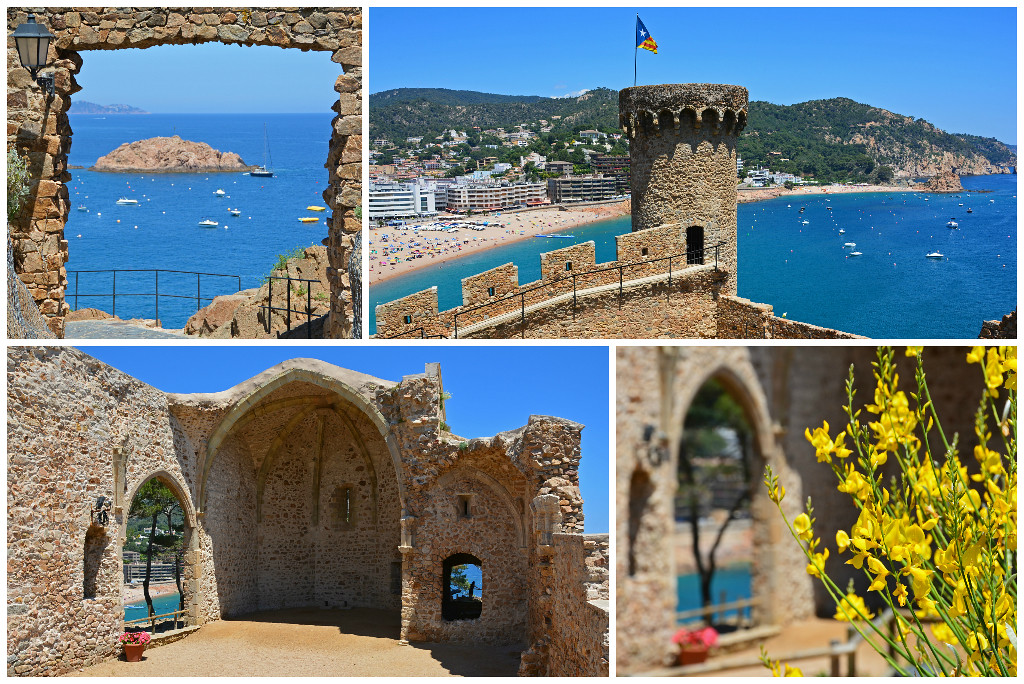 On the hunt for one of the best Costa Brava beach towns? Look no further than Tamariu! You won’t find any massive resorts here, just small hotels and apartments for rent nestled around a tranquil beach cove. This is where we based ourselves during our week in Costa Brava. Even with so many great Costa Brava towns to choose from, we knew we had made the right decision to make Tamariu our home base! There are also some great coastal hikes you can access right from the cove. 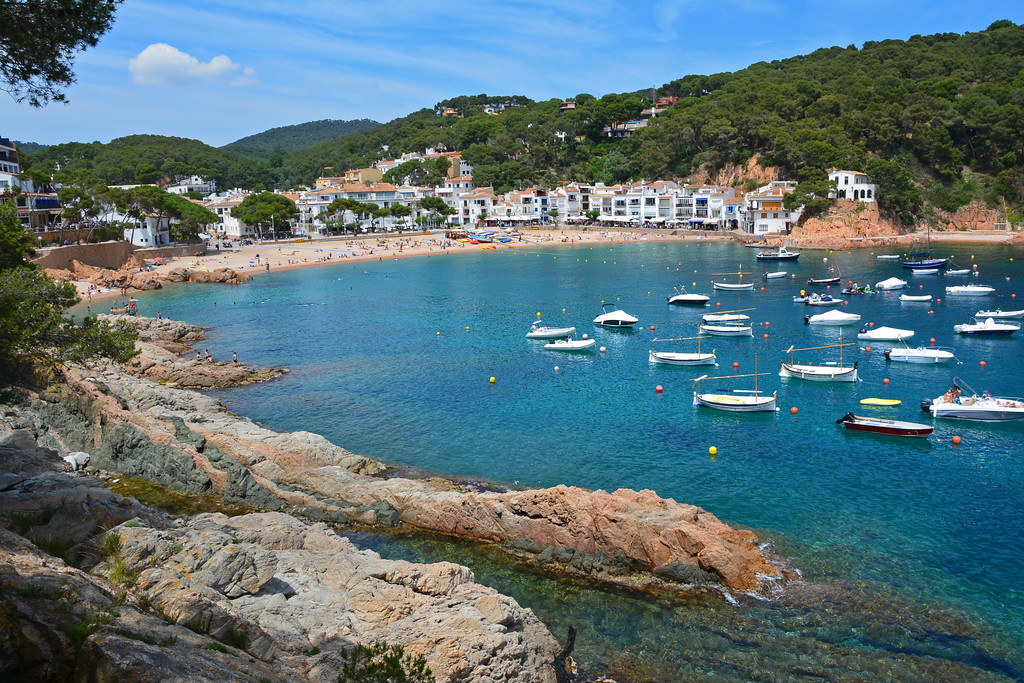 Wandering through Old Town Girona truly makes you feel like you’re taking a step back in time as you explore the unique history in probably the best known of Costa Brava towns. Although Girona has received more recent notoriety for serving as a filming location for Game of Thrones, its actual history goes back thousands of years. Meander through the Barri Vell (Old Quarter) and lay eyes on structures dating back to the 1st-century BC, including parts of the original sandstone Roman walls. Its impressive cathedral (built between the 11th and 18th centuries) contains a wide Gothic nave, the widest rib-vaulted space in existence today. Girona’s Jewish Quarter is one of the best conserved in all of Europe and dates back to 1160.

The River Onyar cuts right through the town center with colorful houses lining both sides. Stand on the red Peixateries Velles Bridge (built by the Eiffel company in 1827) to capture an iconic shot of the Cathedral, the church of Sant Feliu, and the vibrant buildings along the riverbank. It is the River Onyar that separates the Old Town from the more modern and bustling side of Girona. We worked up quite an appetite wandering through the stone streets and staircases of the Old Town, so we crossed the river and made our way to a cooking class to experience some local Catalan cuisine.

Cobblestone alleys, Gothic-style windows and doorways, and charming arches, create a picturesque scene everywhere you look in the medieval village of Pals. This once-neglected village now attracts visitors from all over with its cafes, restaurants, and artisan shops. Walk up to the higher sections of town and gaze upon the surrounding scenery. See if you can spot the Medes Isles off in the near distance and admire the vast expanse of rice paddy fields just past the city walls. 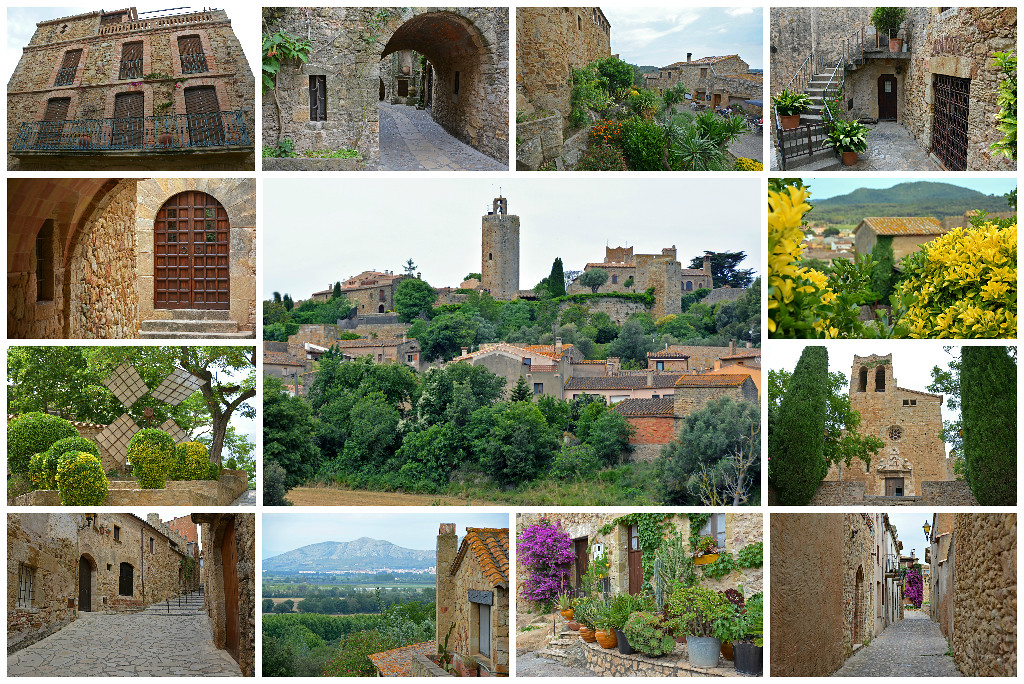 If you’re wanting to experience local Catalan cuisine, don’t leave Pals until you’ve tried a traditional rice meal. We stopped into Restaurant El Pedró and enjoyed the most delicious seafood rice dish, in addition to other accompanying scrumptious selections. We started off with roasted red pepper with goat cheese and dried fruit, along with courgettes (zucchini) pie. Our vat of seafood rice could’ve fed an army and even though we should have stopped eating before desert, we simply couldn’t resist a serving of torró (nougat) ice cream with ratafia and caramelized walnuts and a chocolate coulant with Bailey’s ice cream. Everything was divine! 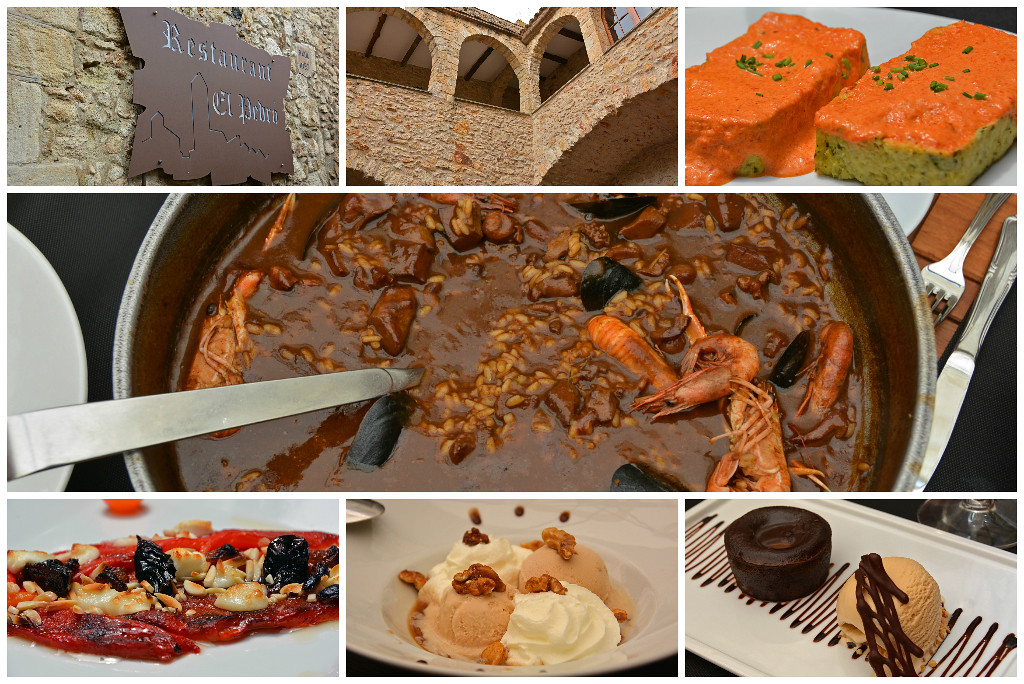 Less than a 15-minute drive from the medieval village of Pals is the equally charming village of Peratallada, whose name is derived from pedra tallada, meaning ‘carved stone’. Most of the buildings are built from stone carved from the moat which still partially encircles parts of the town. You may recognize this town if you’ve ever seen Robin Hood: Prince of Thieves (1991), as a few scenes from the movie were filmed here. 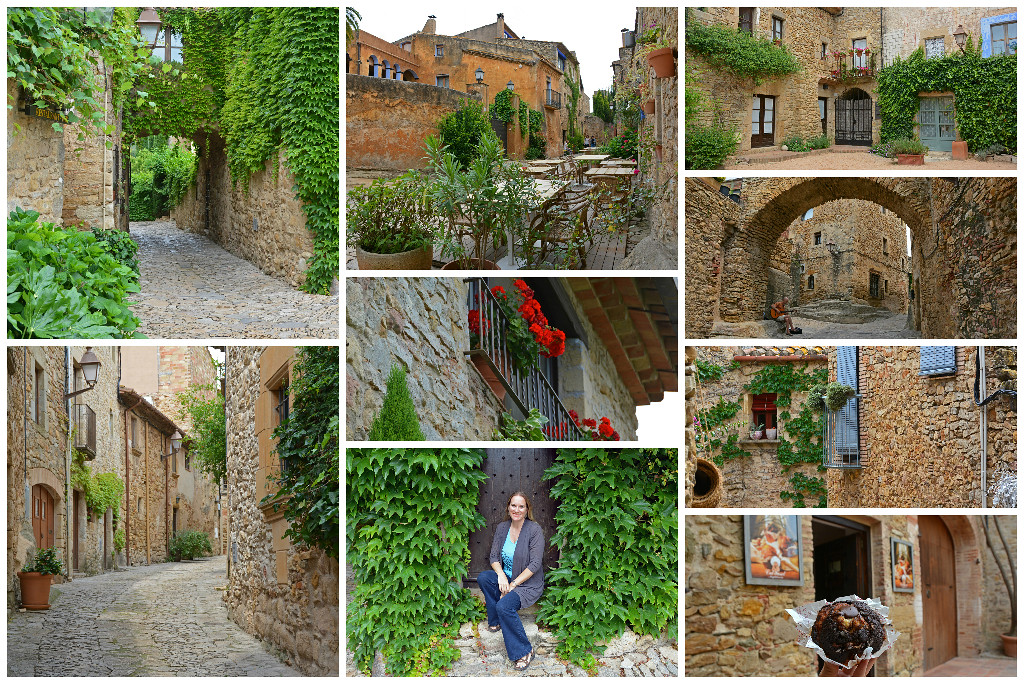 Besides its picturesque alleys, colorful doors, and charming courtyards, the town highlights for us were the 13th-century Romanesque church located just outside the city walls, along with Cal Tuset, a tiny bakery tucked away in a small courtyard. This bakery specializes in muffins and offers a wide variety of delicious flavors including almond, apple, chocolate with orange marmalade, cream, nougat, and peach jam to name a few. Definitely worth a stop if you’re craving something sweet!

Forget traveling to Greece or Rome to see Greek and Roman ruins, the Ruins of Empuries (Ruïnes d’Empúries) in L’Escala allows you to see both! In fact, it’s the only place in Spain where you can explore both ruin types in the same location. Grab an audio guide and discover 2,500 years of history as you explore Greek and Roman colonies dating back to the 6th century BC. To date, only 25% of the site has been excavated, which means there’s still a whole lot of history yet to be discovered!

Across the street from the ruins is the beach of Portitxol. Wooden steps lead to a viewpoint which overlooks the Bay of Roses, the coastline of Empúries, and the town of l’Escala. The Arch of Portitxol is a natural rock formation, which can be found just to the left of the wooden staircase. Once you completed your journey through time at the nearby ruins, allow time to stand still as you relax on the beach admiring the stunning Costa Brava coastline. 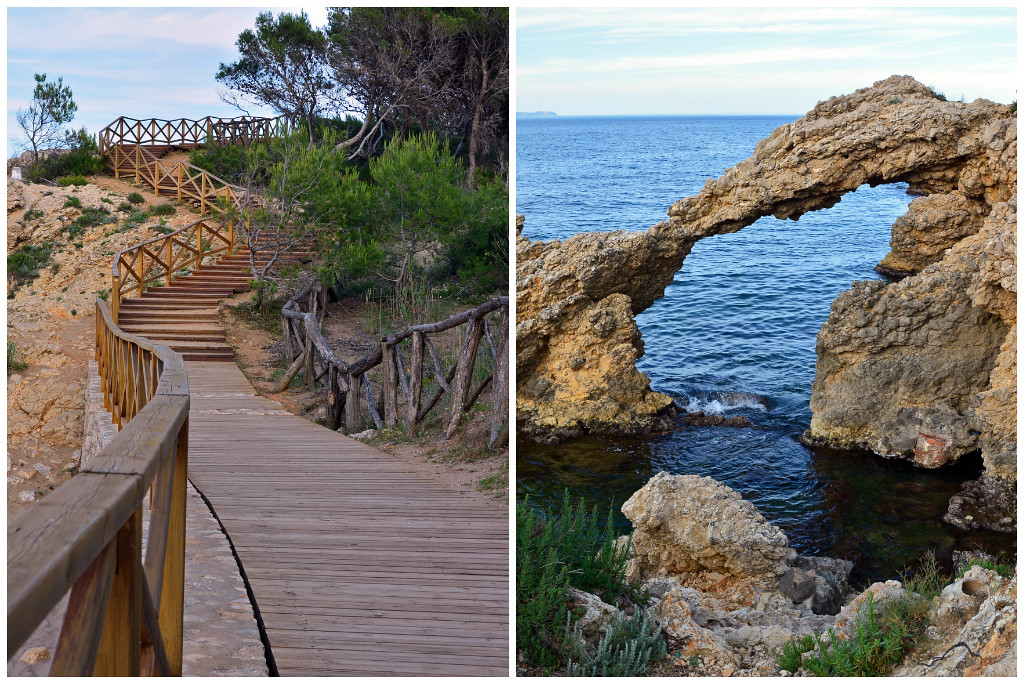 For a look at more modern history in Costa Brava, we visited the home of Salvador Dalí in Cadaqués. Following a scenic, windy road through the Catalan hills, we arrived into the charming seaside village of Port Lligat and to the eclectic former home of Dalí. The Spanish surrealist painter is best known his painting of melting clocks – The Persistence of Memory and also for his quirky mustache and often bizarre behavior. Dalí lived and worked at this residence (1930 to 1982) until his wife’s death, at which time he took up residence at one of their other homes- Púbol Castle just over 40 miles (66 km) away.

Tickets to tour the home must be purchased in advanced and reservations are limited. Be sure to book early to avoid disappointment. There are 3 distinct areas of the house for visitors to explore. The living areas and bedroom gives us a look into the private life of Dalí and Gala (his wife), while the studio rooms provide insight into the unconventionally artistic mind of Dalí. The outer courtyards, olive grove, and pool area, showcase more of the artist’s eccentric style and provide us with a glimpse into his and his wife’s entertaining and social life. We’d recommend reading up on Dalí prior to your visit, if you’re not already familiar with his style and work.

From medieval villages to a more recent modern past, history in Costa Brava is fascinating and will intrigue visitors of all ages. No matter which of the countless Costa Brava towns you visit, there is always a bit of history waiting to discovered.

We’d like to thank the Costa Brava Tourism Board (Patronat de Turisme Costa Brava Girona), who provided support during our visit to Costa Brava. As always, our write-ups are an accurate representation of the experiences we had.