Prior to our visit, we heard from numerous people that Amsterdam was the place to be, so we made certain to make it a stop during our brief tour of the Netherlands. To be honest, we wish we hadn’t. Amsterdam for us wasn’t as amazing as everyone made it out to be. Here are the many reasons why we did not love Amsterdam. 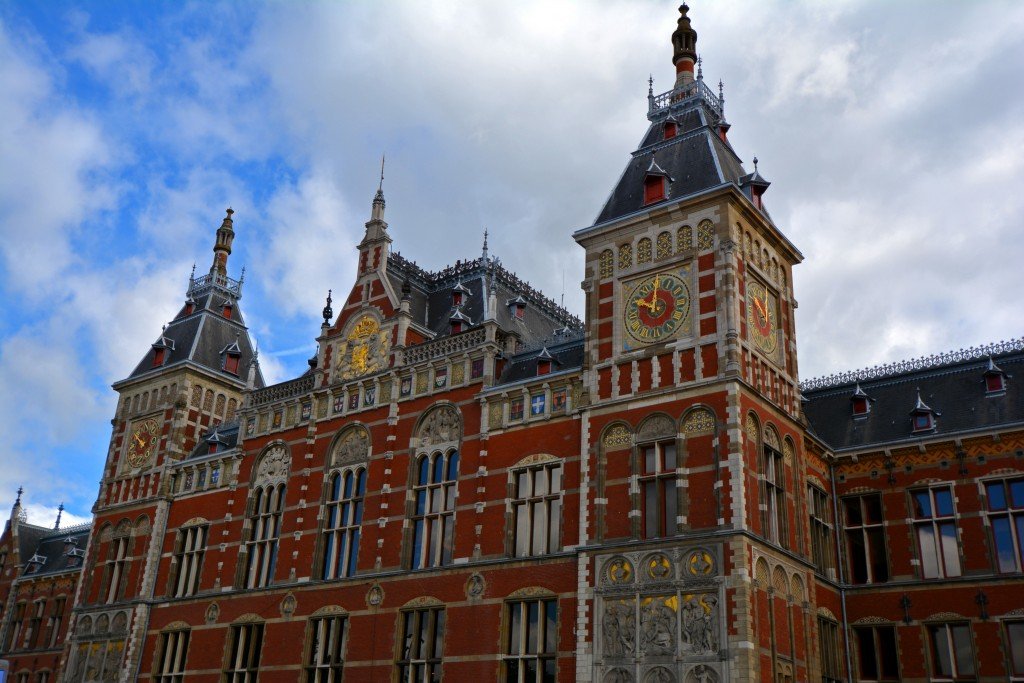 Too Many Bikes in Amsterdam!

To begin with, the city itself was too large and congested for our taste. We’re all about being environmentally friendly and while bikes are a great way to get around, they were EVERYWHERE! (They even have bicycle parking garages which were filled to the brim!) The streets and sidewalks were so crowded with bikes, we always felt like we were in someone’s way. 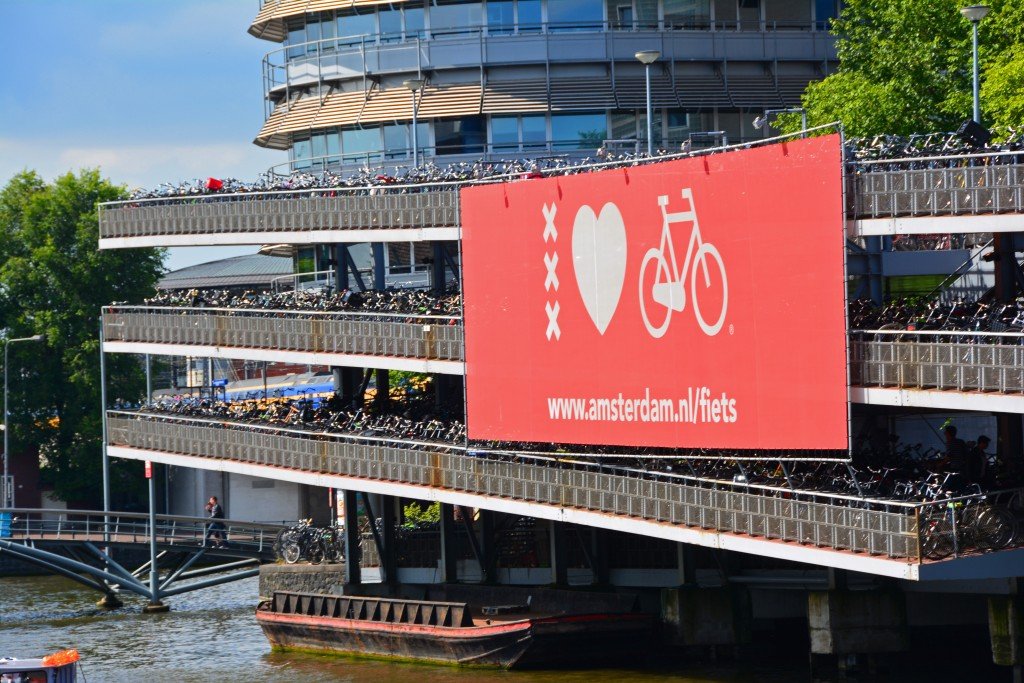 While we did most of our exploring on foot, we also wanted to cruise the canals in an open-air boat tour. However, all open-air boat tours were canceled the day we visited because of “pending showers”, even though there was never so much as one rain drop the entire day. 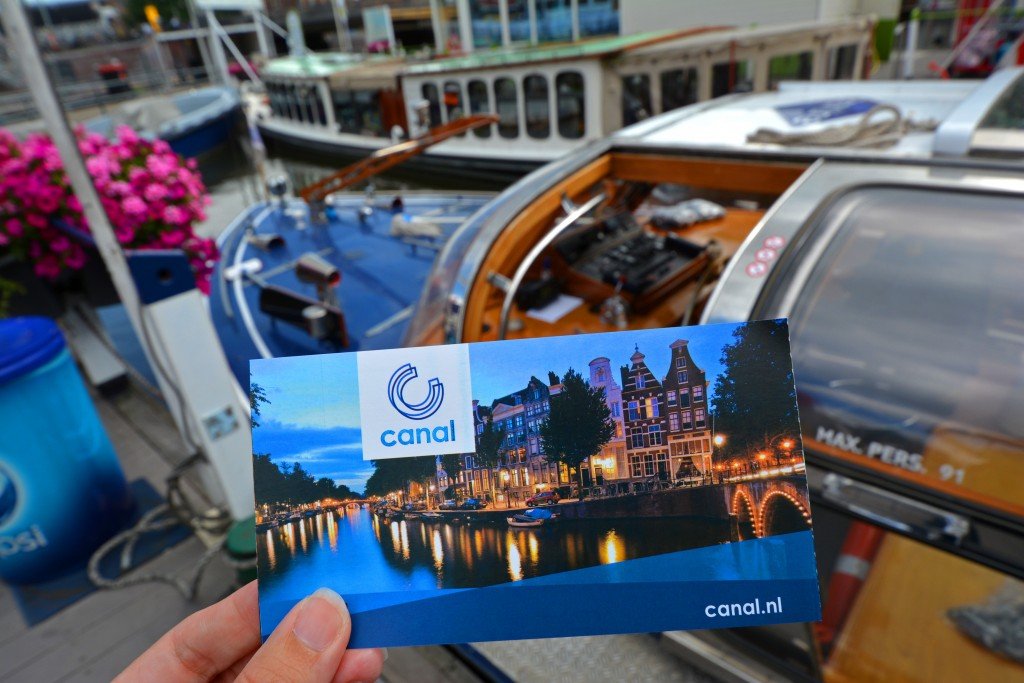 So, instead we settled on a glass-top boat with sliding windows. In the picture below Sam looks rather happy, but truth-be-told we couldn’t wait to get off that boat! 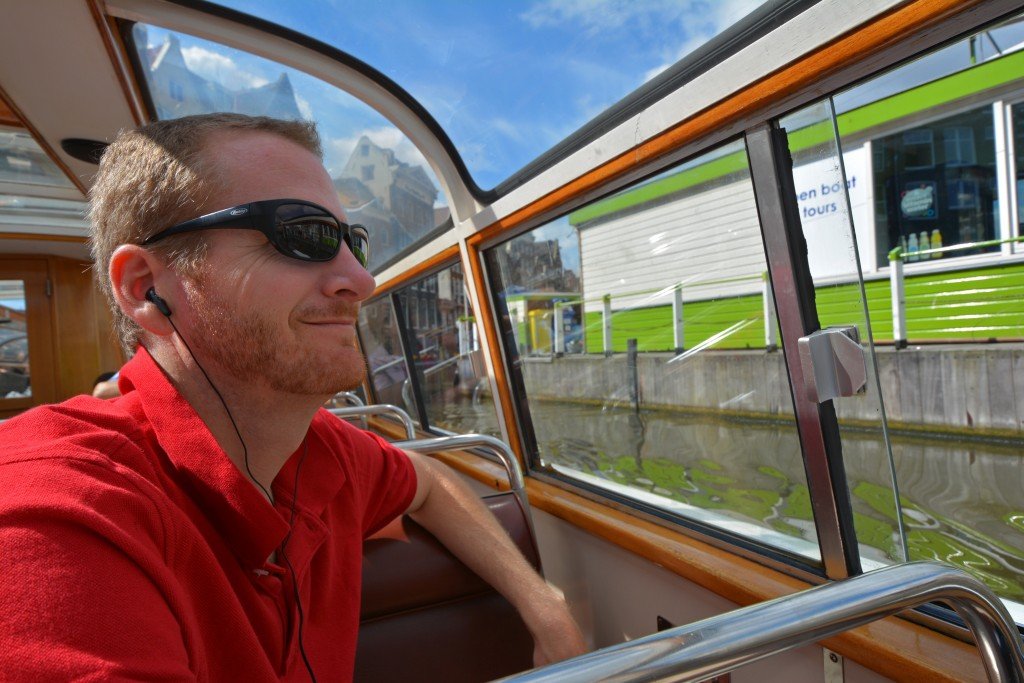 Thank goodness it wasn’t a full boat, because there was so little legroom in between us and the seat in front of us that we had to sit in separate seats so we could turn sideways to avoid crushing our kneecaps. 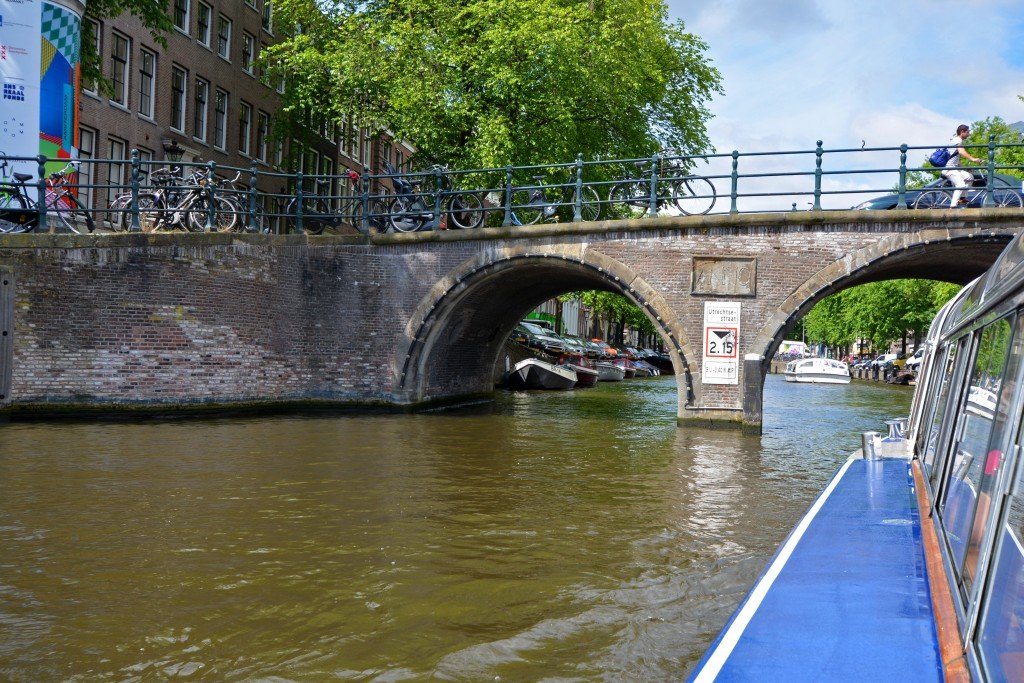 The most disappointing thing about the tour was the fact that the narration was recorded. The earbuds they provided us with were terribly uncomfortable and kept slipping out of our ears. The narration itself was a little off for the first quarter of the tour, so what was being said was not matching what we were seeing. It lacked personality and it was just plain boring! 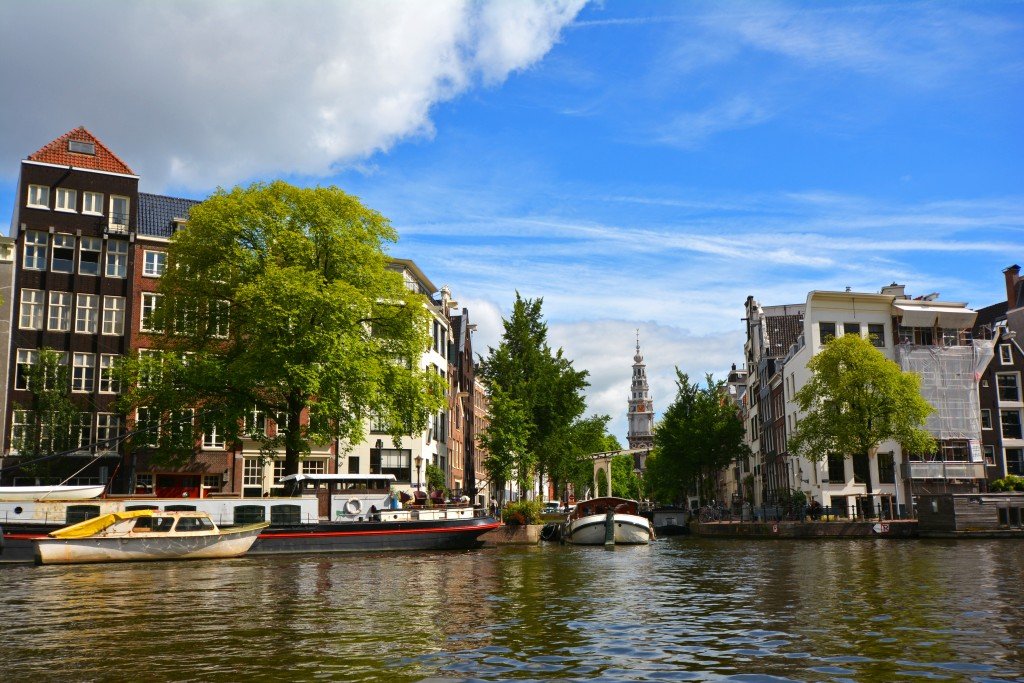 The views were nice, but we would have much rather explored the canals by walking along the shoreline. 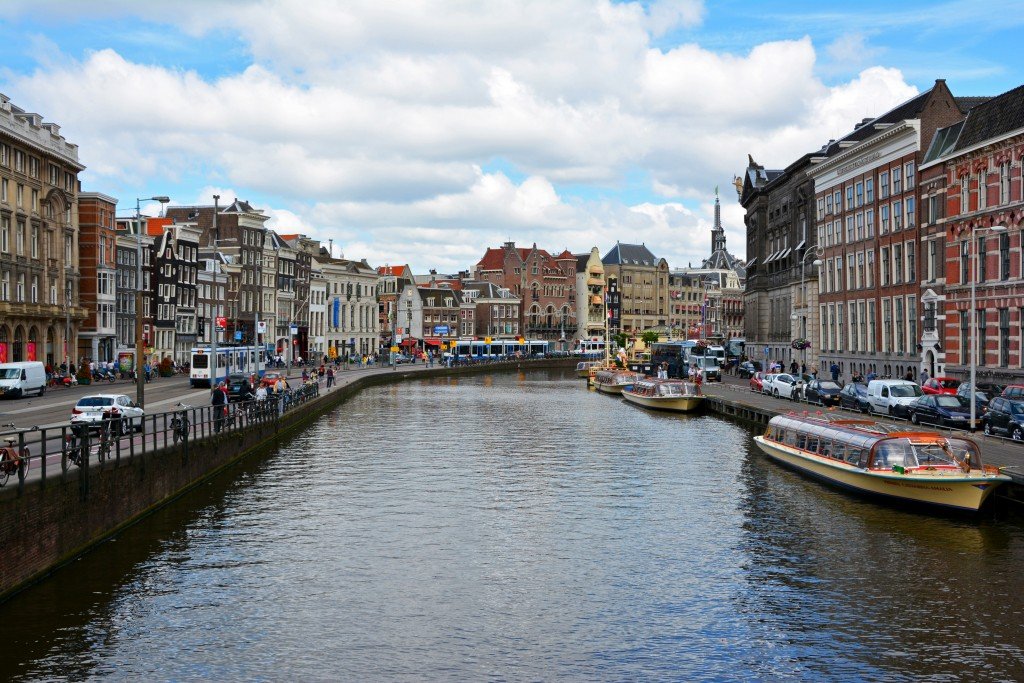 We weren’t super interested in visiting any of Amsterdam’s supposed ‘must visit’ attractions. Though we like Heineken beer, we’d much rather visit a small craft brewery than tour a commercial industrial brewery. 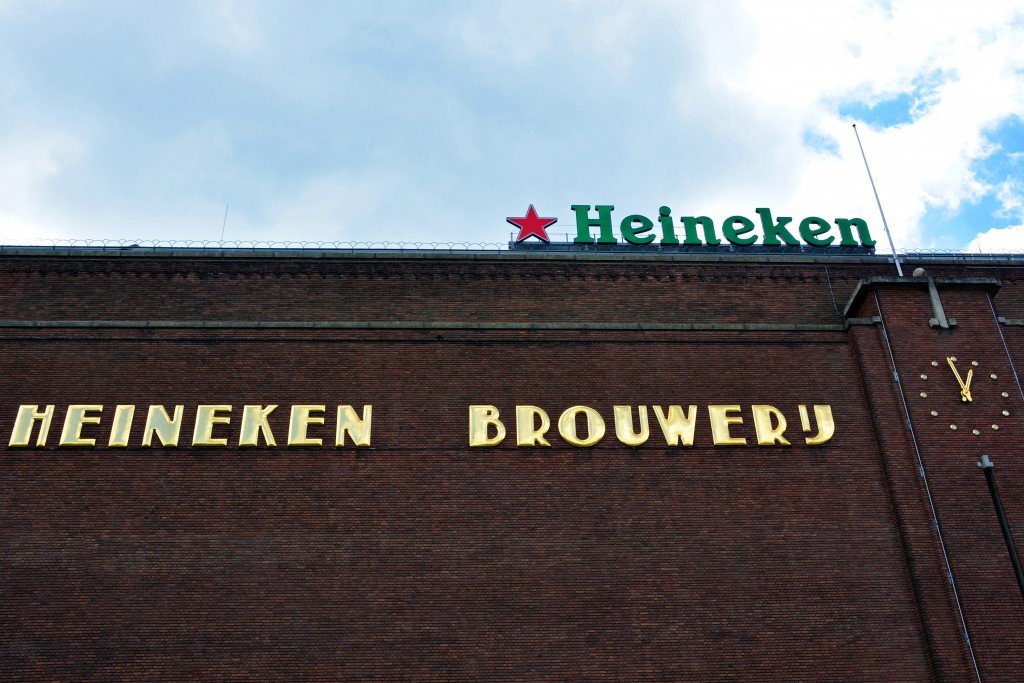 And while it would be fascinating to take a step back in history, we weren’t interested in waiting in a ridiculously long line to get inside the Anne Frank House. 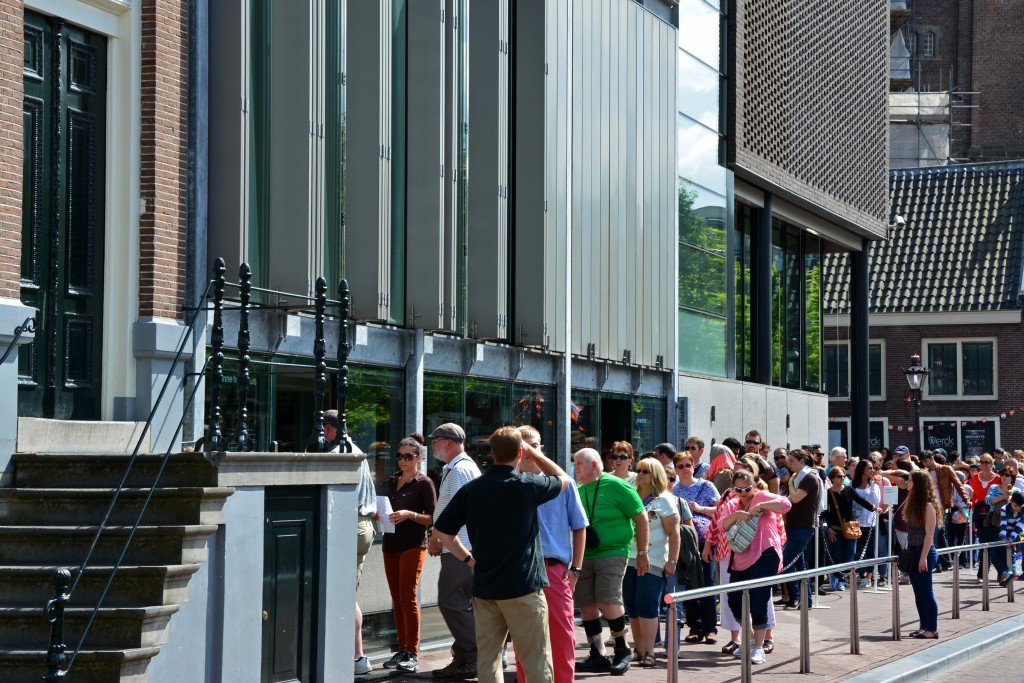 We found the Floating Flower Market (pictured below) to be a little too crowded and touristy for our taste. 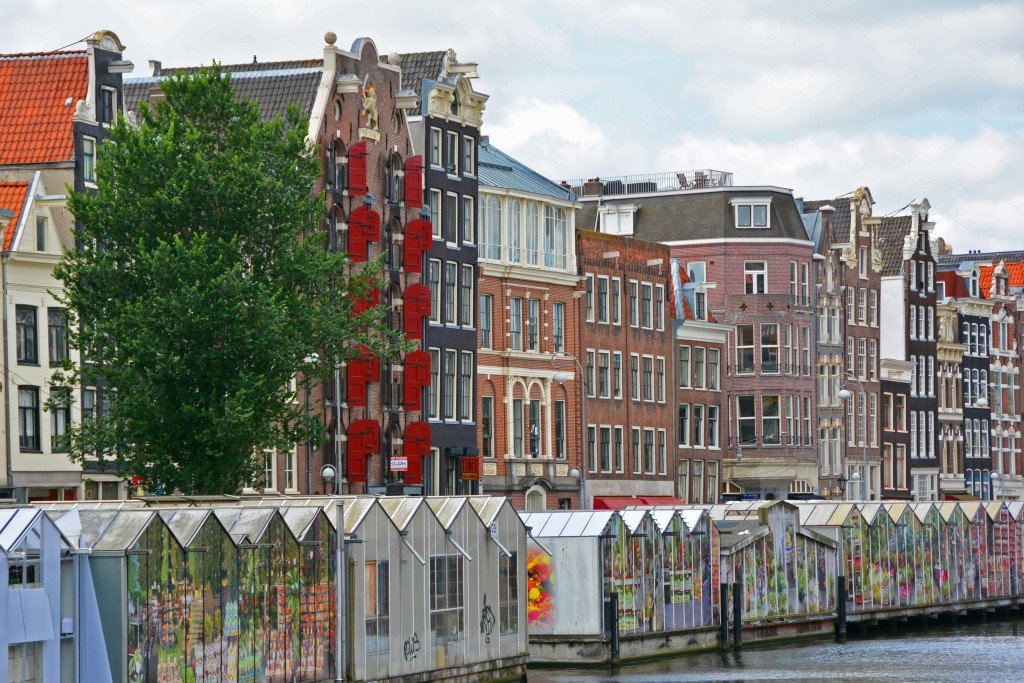 And what makes Amsterdam, well… Amsterdam, wasn’t of interest to us either. Legal drug use and street prostitution just isn’t our thing, so this city’s obvious displays of these “recreational” activities was a turn-off for us. 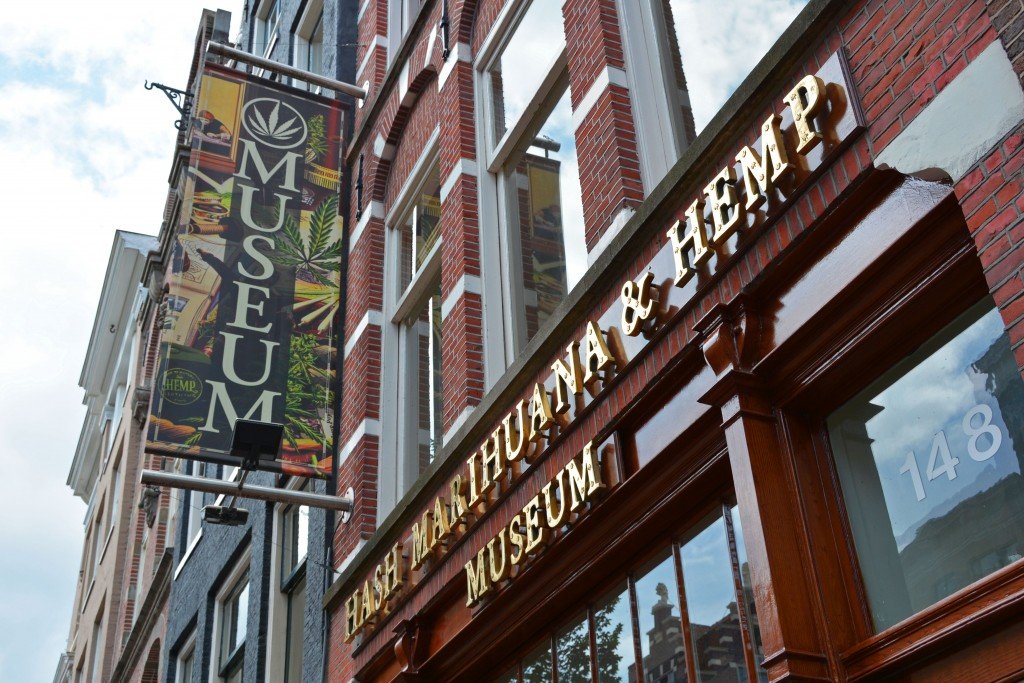 Of course you can visit Amsterdam and attempt to avoid specific regions, like the Red Light District. However, we purposely tried to steer clear of this part of the city and ended up right in the middle of it, because it wasn’t labeled on the map we were using. 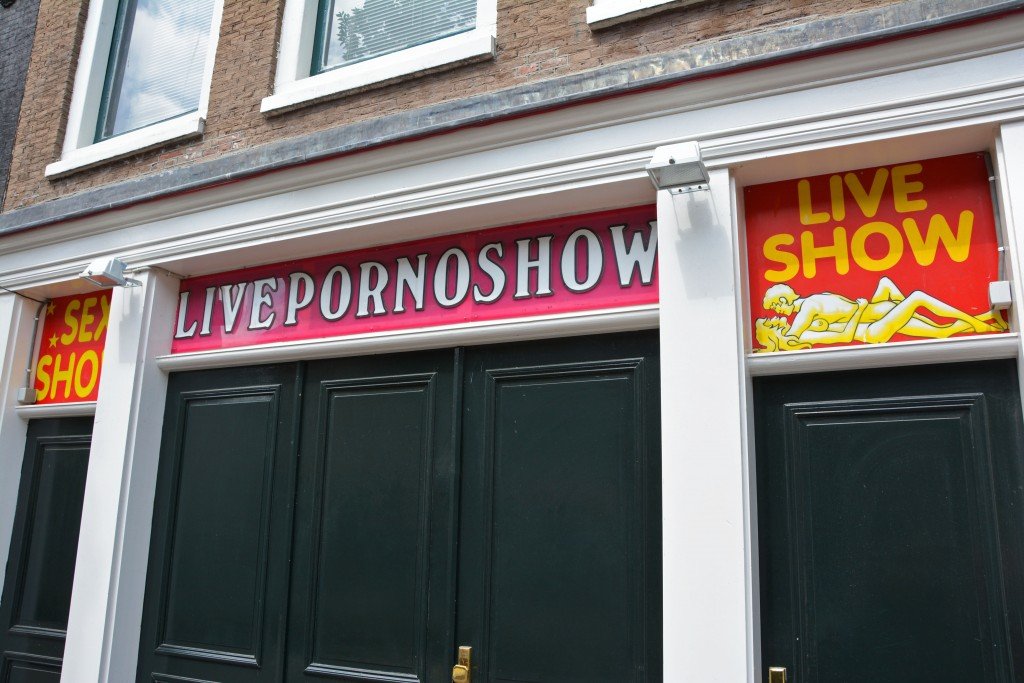 Notice how the title of this post is NOT Why We Hated Amsterdam, but rather Why We Did Not Like Amsterdam. Overall, it just wasn’t our cup of tea, though there were still parts of Amsterdam that we did enjoy.

Following our less-than-stellar canal tour, we made our way to De Pijp neighborhood to visit the Albert Cuyp Market and to find some lunch. Over 300 stalls line both sides of the Albert Cuypstraat selling everything from fruit, vegetables, cheese, fish, and spices to clothes, cosmetics and bedding. The market is open Monday through Saturday from 9:30 am to about 5 pm. 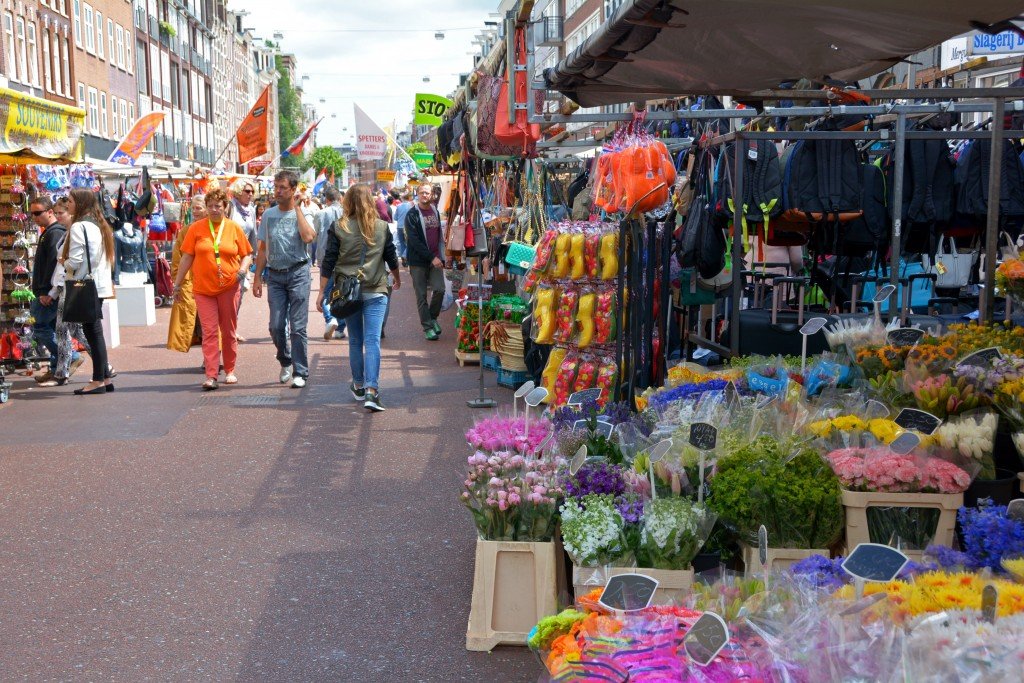 De Pijp is also known for its plethora of eateries, so we wandered for a bit before settling on a restaurant/bar called Chocolate. 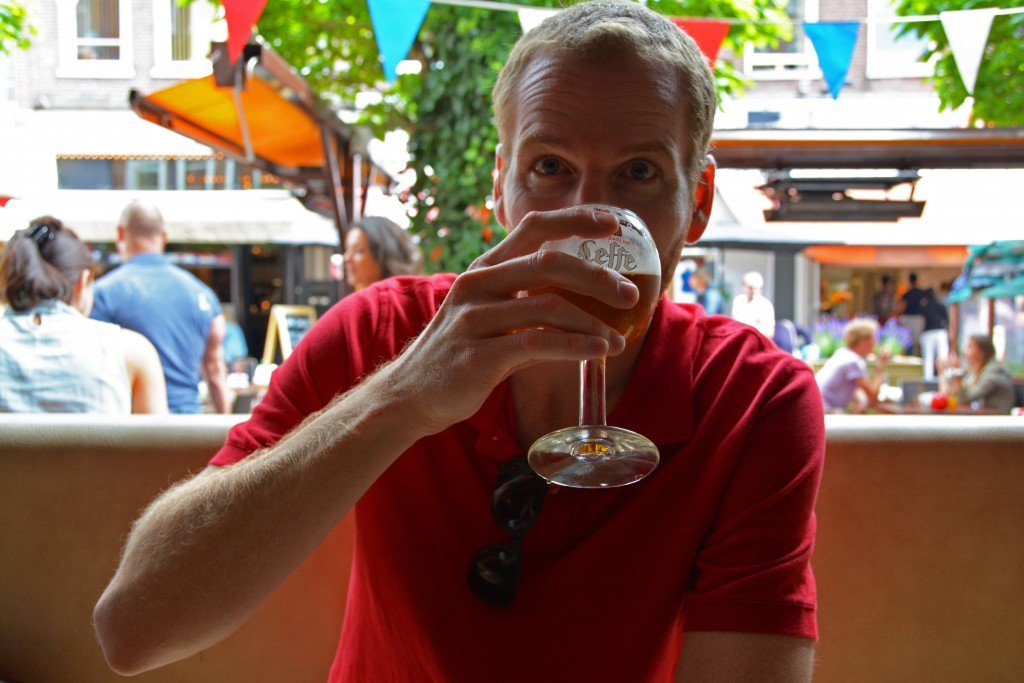 The prices were decent for both beer and food. We call them grilled cheese sandwiches, but the Dutch call them toasties. Whatever you want to call it, it was pretty tasty! 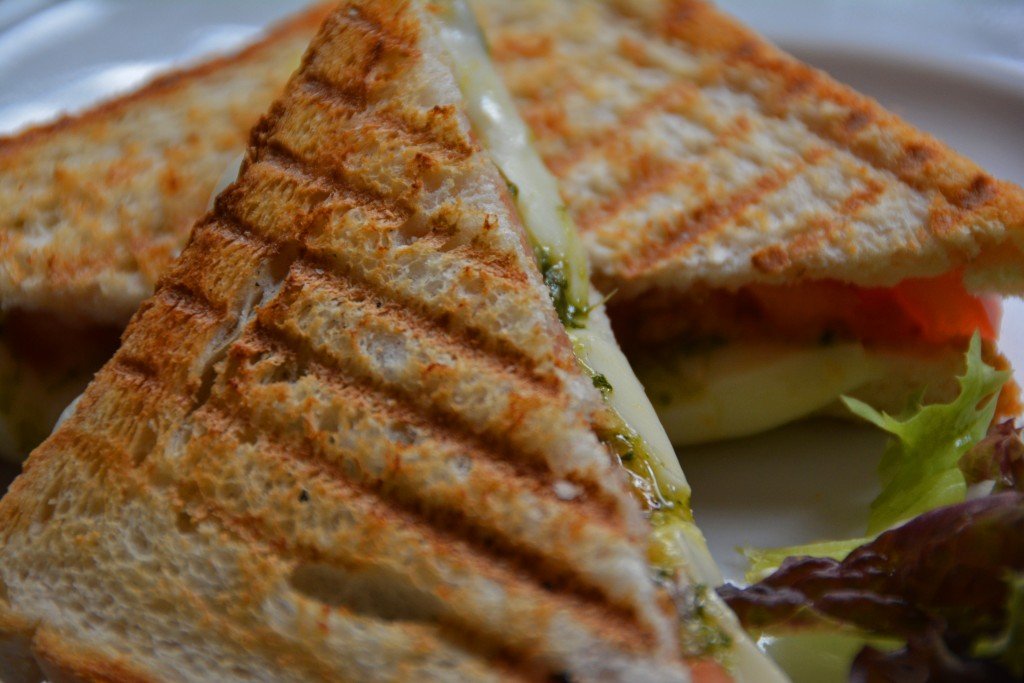 We asked our server where to find the most picturesque canal in Amsterdam and she recommended we visit Groenburgwal canal to get Zuiderkerk’s steeple in the background. 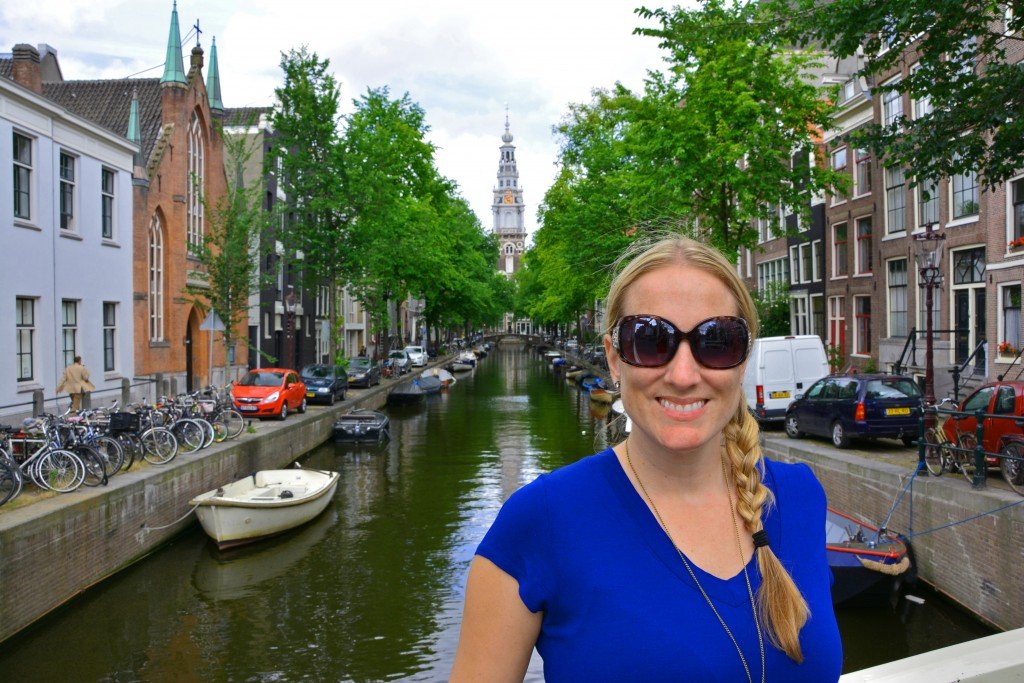 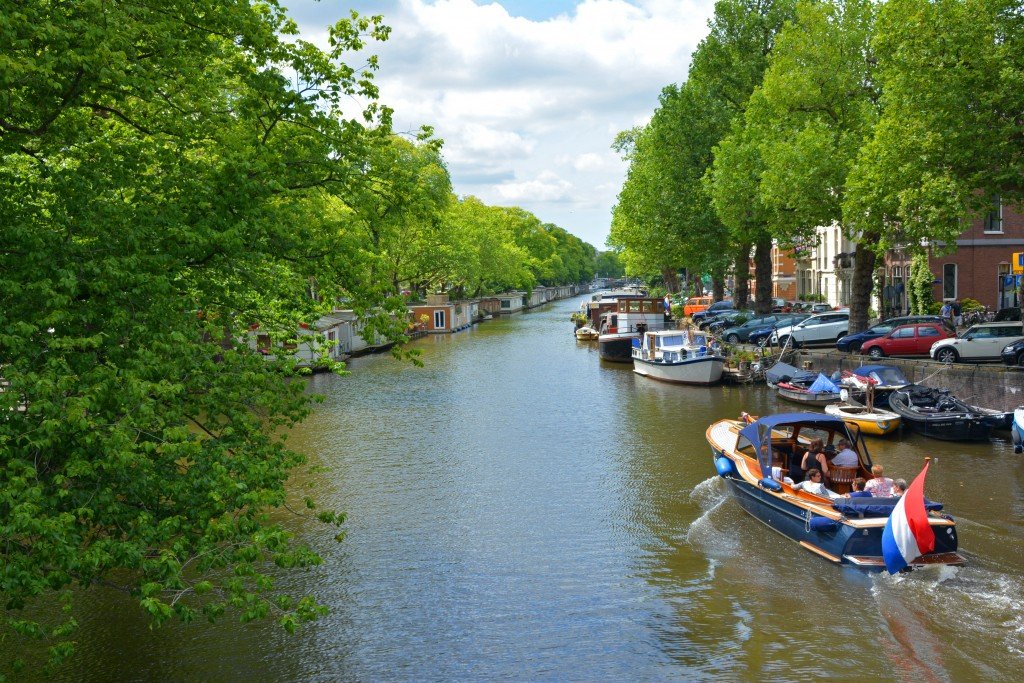 We continued our exploration of the city by foot, and don’t get me wrong, there were definitely charming parts of the city with unique and colorful architecture. 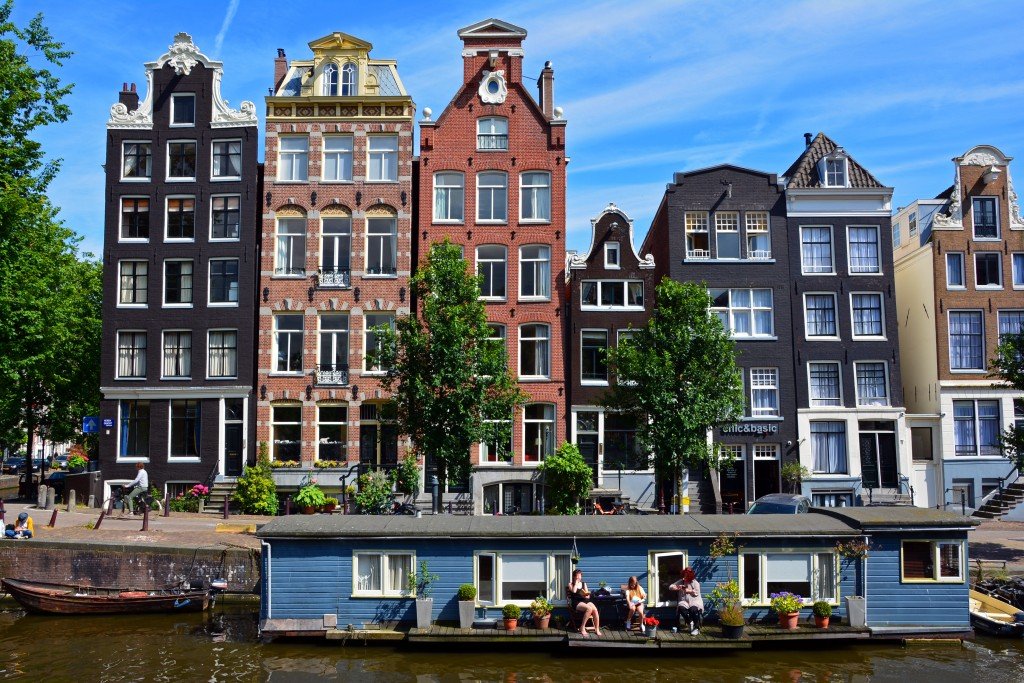 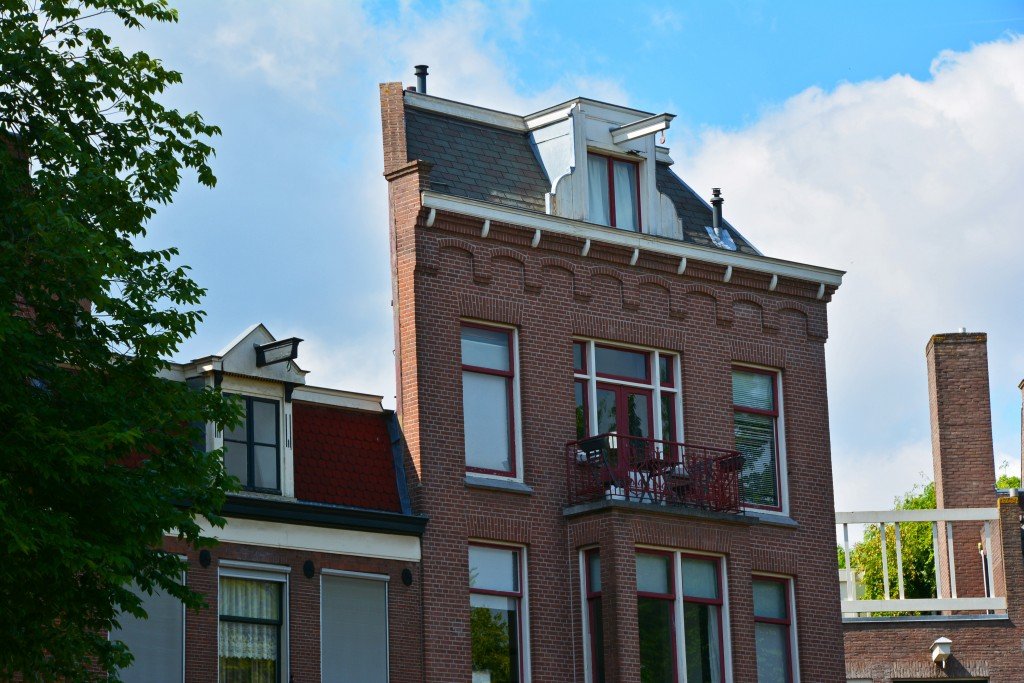 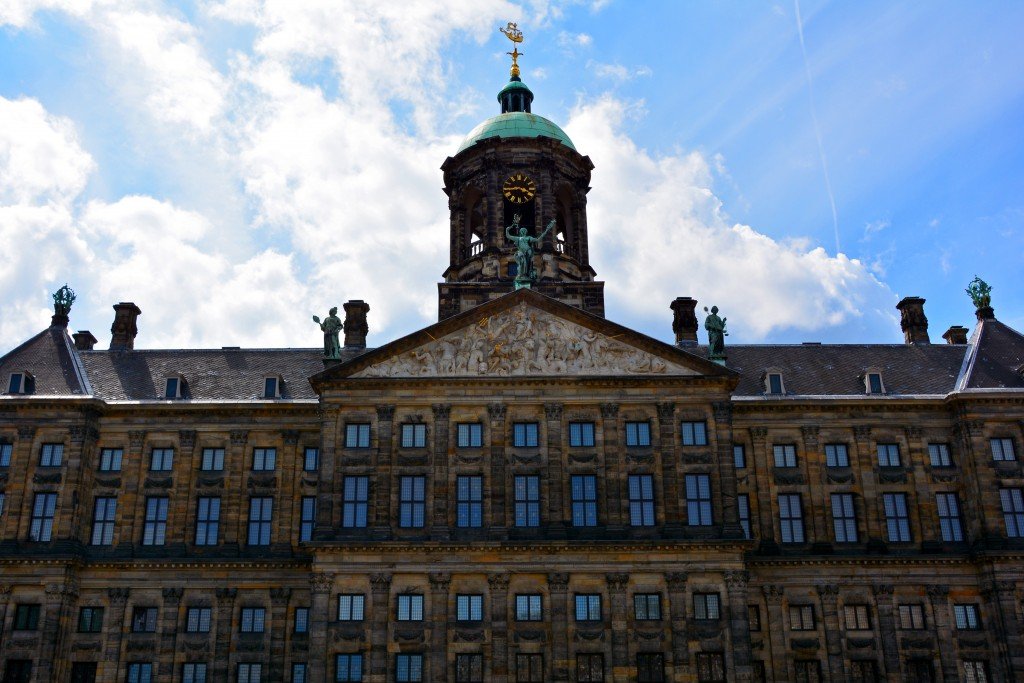 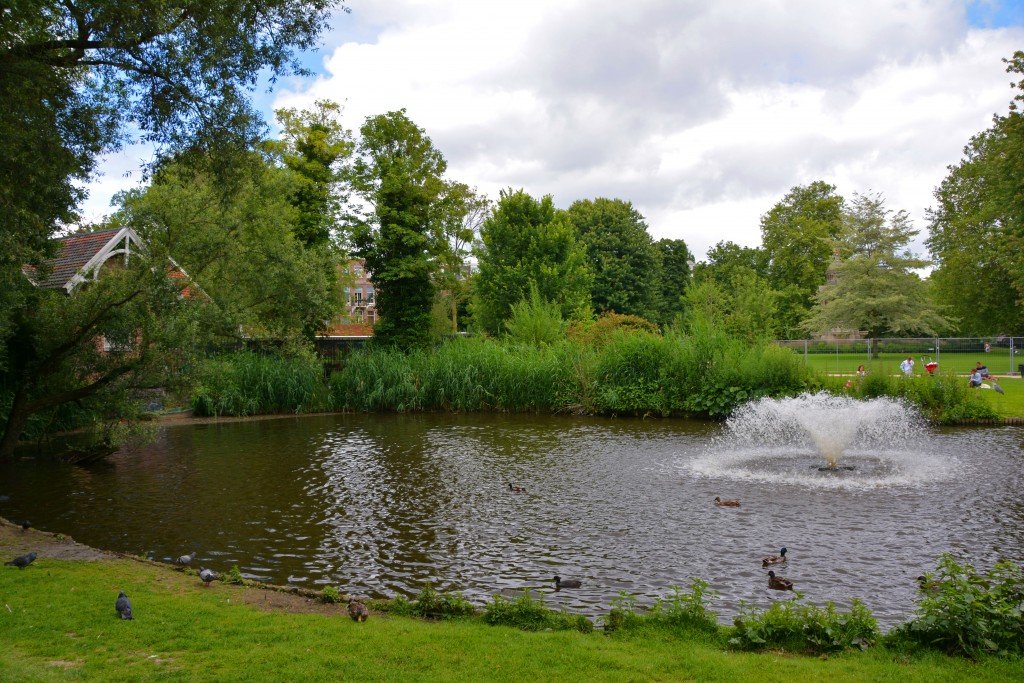 So again, we’re not telling you NOT to go to Amsterdam, as we’ve talked with other travelers who loved the city. What we don’t want to do is tell you why we did not like Amsterdam without recommending some alternatives. We were in search of a charming Dutch town filled with canals, neat architecture, and some fun things to do and while Amsterdam had all of these things, it wasn’t exactly what we were looking for. There are many other charming (and smaller) nearby towns without blatant displays of drugs and pornography. Unless that’s what you’re looking for, we’d say you’re better off visiting towns like Haarlem (pictured below), Den Haag (The Hague), Utrecht, Rotterdam, Leiden, and Delft for a genuine Dutch experience. 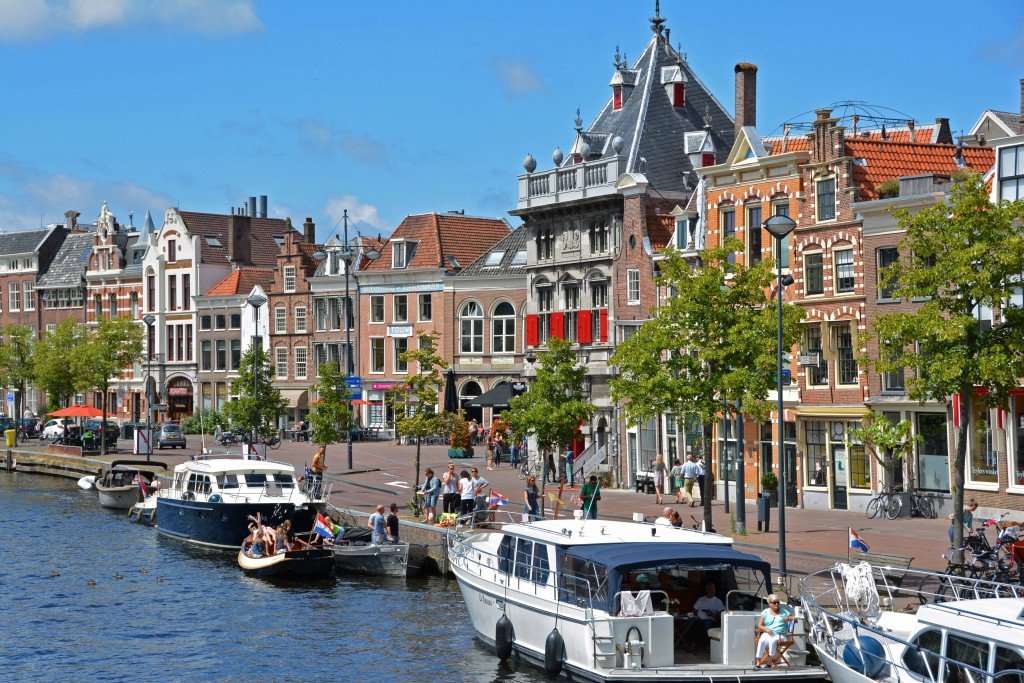 Travel is all about preferences and experiences, so we’re not telling you NOT to visit Amsterdam, we simply wanted to highlight why Amsterdam just didn’t do it for us!