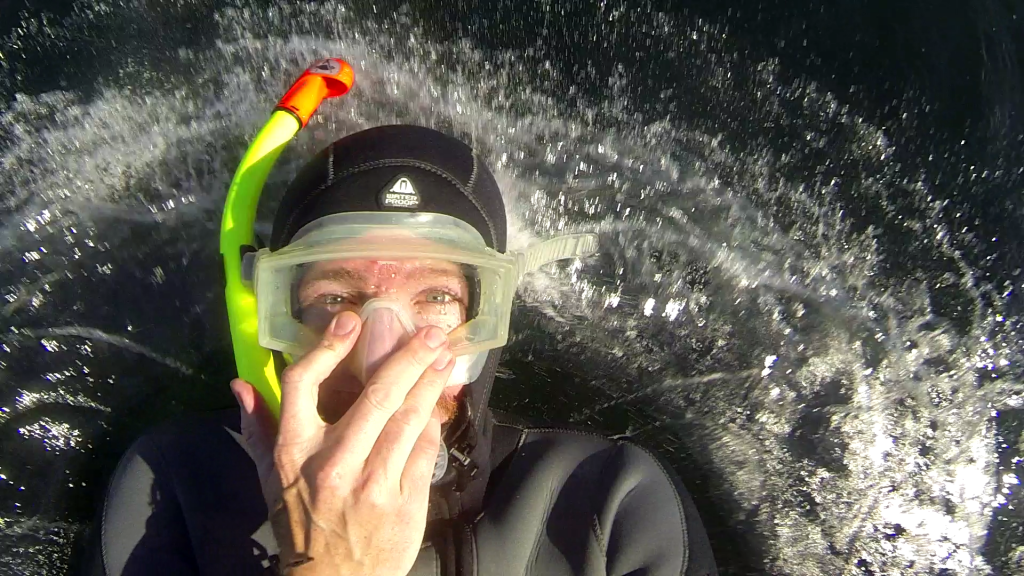 There is an island at the end of an archipelago not far from Karlskrona in the south of Sweden. This island is known to many sailors and to the locals, to some diving fanatics and some edge-of-your-seat thrill-seekers. Before my visit to Sweden, I knew nothing about the island of Utklippan. Now I can list my visit among my favorite travel experiences. It wasn’t just the extreme rigid inflatable boat (RIB) ride we took to get to the island, and it wasn’t just the wonderful time spent swimming with seals on a Swedish archipelago. It was also the people, it was the food, and it was a warm fuzzy feeling that still lingers which I have dubbed “The Karlskrona Vibe“.

Patrik, Patrik, and Samuel from the company Saltstänk met us with their super-fast Rupert rigid inflatable boat (RIB) at a dock in Karlskrona. “Saltstänk” means “salt spray” in Swedish. Later on I would realize they didn’t just pick a name out of thin air; there was a very specific reason for naming the company after splashing water. After donning our dry suits and getting a safety briefing from Christoph and his excellent crew inside Unique Dive & Travel, we hopped into the RIB and struck out from the mainland!

Karlskrona is part of an archipelago that is a quick 50-minute plane ride or a scenic and comfortable 5-hour train ride from Stockholm. As we cruised away from the dock, we passed picturesque communities and old military fortresses as we slowly puttered out of the channel. Samuel took some time away from agreeing at how much we looked like a bunch of construction workers to explain some of the history behind the nearby fortresses. But wait a minute. We’re still not up to full speed. Somebody told me this thing was supposed to go fast…

Well that’s more like it! Once the twin engines really got roaring, we had to scream to be heard. And there were a lot of screams, as one of the Patriks treated the ocean as his own personal slalom course. The boat was nearly on its side as he cut across the open water, and we loved every minute of it. The closest experience I can compare it to is being on a roller coaster on the ocean.

After an exhilarating 50 minutes, we arrived at the farthest island in the Karlskrona archipelago: Utklippan. This would be our home for the night and our base of operations for the next great adventure…

Swimming With Seals in Sweden 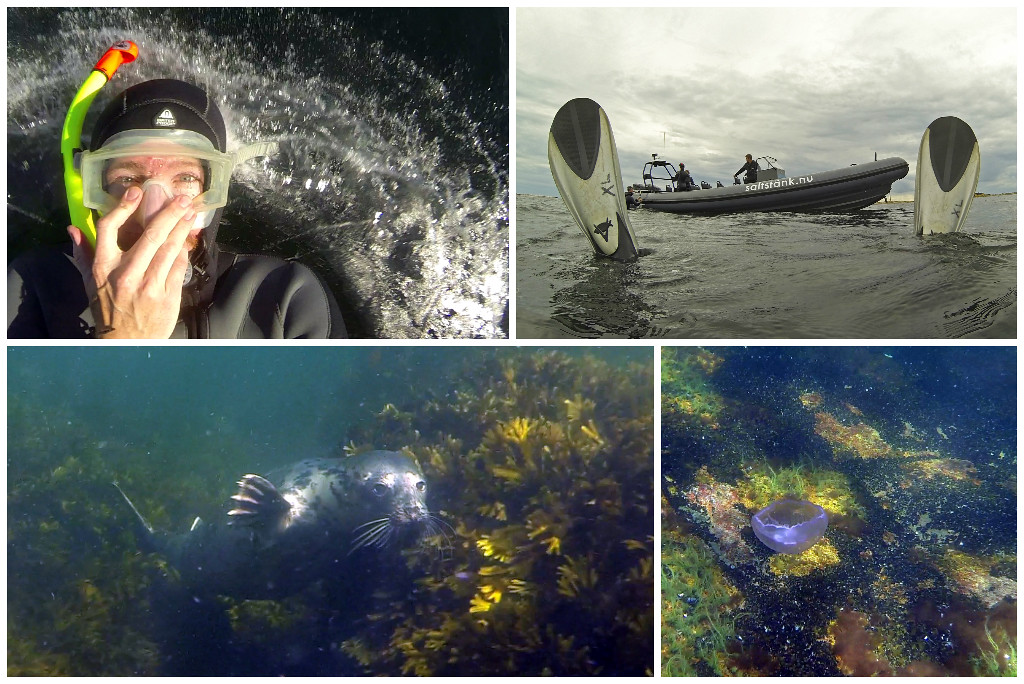 All of our equipment was provided by Saltstänk. While the water wasn’t exactly frigid, the full wet suit helped me swim comfortably so I could focus on the experience and not my chattering teeth. There were two rocky islands close enough to Utklippan to be seen from the mainland. Roughly 100 seals were basking in the summer sun when we cut the boat engines and floated closer. As our RIB approached, the seals fled the islands in a hurry. I thought we had scared them away! I felt bad for disturbing them in their natural habitat, since I was expecting them to already be used to curious swimmers. It turns out I was wrong. They weren’t swimming away from our boat…they were swimming toward it! It seems the seals were even more curious than the snorkelers. So long as I floated as still as possible in the water, one of the more investigative seals would swim in for a closer look. It was a genuine joy to see these marvelous creatures swimming in their native habitat.

After a good swim with our new friends, it was time to check out the island of Utklippan and its 19th-century lighthouse, where some of us would be spending the night.

There isn’t a whole lot to it, to tell you the truth. A few buildings, a safe harbor for passing ships, and that’s about it. But wait: what’s this I hear about a sauna? That’s right, this tiny island has a sauna. The boys from Saltstänk began the process of warming it up for later. In the meantime, the other Patrik treated us to coffee and cookies at the top of the lighthouse after we finished a quick tour. Once we finished our much-appreciated snack, we only had a little time to kill before the main course. The boys brought a propane grill which could cook enough food for all of us at once. We feasted on fresh everything and socialized like good travelers until the sun went down.

End of a Great Adventure in a Swedish Archipelago

We ate, we drank, we steamed in the sauna. We got to know each other and we told our travel stories. Samuel tried to convince us there are jungle penguins, but the jury’s still out on that one. There was a special feeling in the air, and I’m sure it had a direct link to the people of Karlskrona. It was a good vibe. A great vibe. Eventually it was time to say goodnight. One of us slept out under the stars. I found a nice bed and got a few hours of sleep before the sunlight rammed into my bedroom at 4:30am. But that’s okay, because I was eager for another snorkel session with the seals. When that was finished, we packed up our gear and left the island as we’d found it, ready for the next group of lucky travelers. 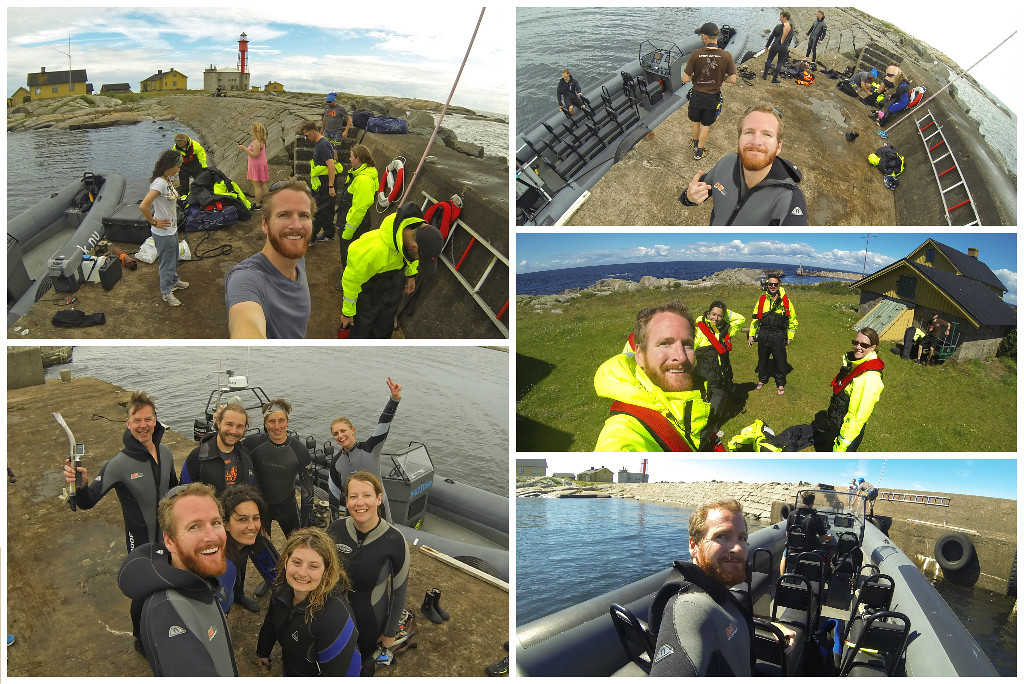 Gratuitous selfie shots, I know. The shots you see here probably represent about 95% of the selfies I’ve ever taken in my life. The trip was that awesome. My fellow travelers were great, the tour guides were excellent, and the folks from the tourism board at Visit Karlskrona were among the nicest I’ve met during my travels. I snorkeled with seals, ate delicious barbecue, stayed up late to sit in a sauna on an island at the end of an archipelago, learned a bit of history for good measure, and took an ultra-fast rigid inflatable boat ride. Put all that together, and you end up with an adventure that will be remembered for a lifetime.

Looking for more fun stuff to do in the area? Check out our post about touring Karlskrona’s underground military bunker system!

We’d like to thank Visit Karlskrona and Saltstänk of Karlskrona for hosting this wonderful trip. As always, our write-ups are an accurate representation of the experiences we had.