Guide to Hammondsport NY on Keuka Lake in the Finger Lakes

It’s no secret… we LOVE small towns! So a visit to the Finger Lakes region in New York was the perfect fit for our travel preference. The region is brimming with charming small towns to discover. So naturally, we simply couldn’t resist the urge to visit THE “Coolest Small Town in America” (according to Budget Travel Magazine) – Hammondsport NY. 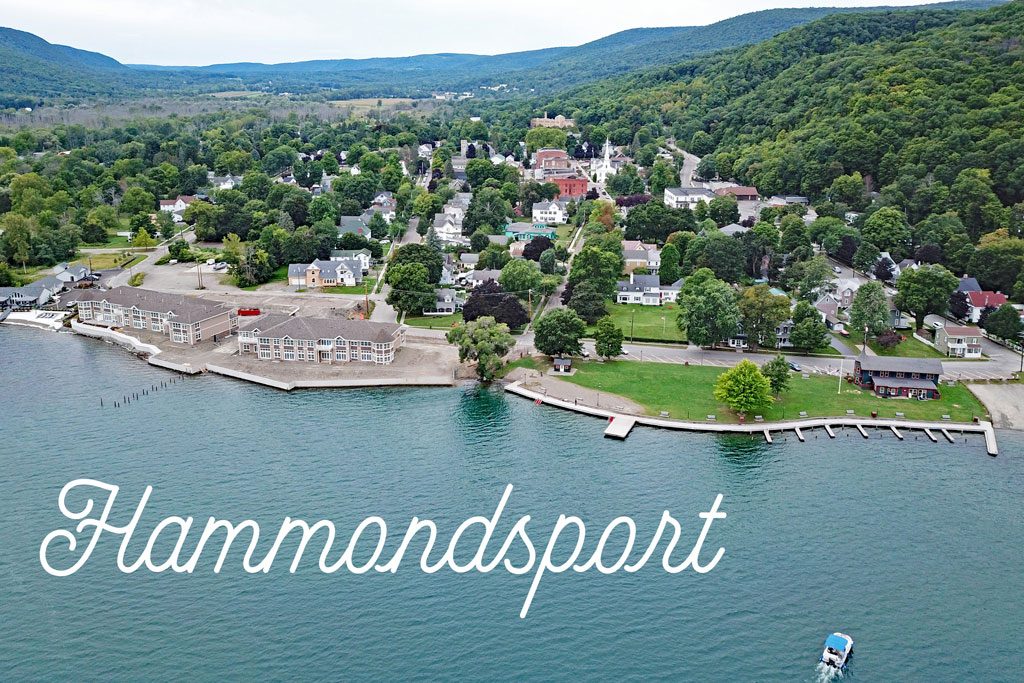 Hammondsport NY is located at the base of Keuka Lake (pronounced cue-kah and sometimes written as Q-ka). Keuka is the third largest lake (behind Seneca and Cayuga) in the Finger Lakes region in central New York. While most of the other lakes in the region are long and narrow (resembling fingers), Keuka Lake is shaped like a Y. The lake is approximately 20 miles long and varies in width from 0.5 mile to 2 miles. One of the best things to do in Hammondsport is to get out on Keuka Lake. And we’ll talk about how you can do that in just a bit! But for now, let’s talk about the village itself!

Less than 1,000 residents call Hammondsport NY home. Hammondsport is actually a village within a town (Urbana). It is less than 1 square mile, so with a leisurely stroll, you can see it all! Wander around Pulteney Square to peruse the boutique shops and several dining options. (We’ll cover Hammondsport restaurants shortly!) Meander along the water’s edge at Depot Park and if the weather is warm enough, jump in the lake and go for a swim! There’s a designated swimming area at Depot Park (and also at Champlin Beach just 0.1 mile away).

Also at Depot Park are public docks, free for anyone who wishes to arrive to the village by boat. The village square is then just a two-minute walk from the docks. So, whether you’re a local boat owner or a traveler who has rented a boat during your visit to Keuka Lake, be sure to take advantage of Hammondsport’s free “dock and dine” | “stay and shop” initiative. 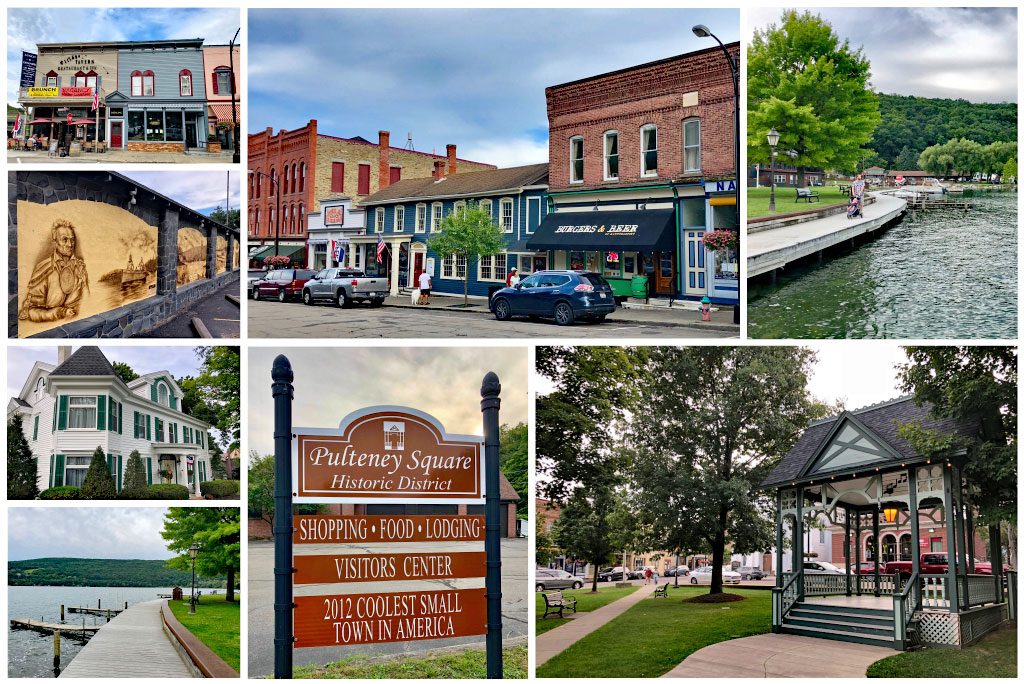 Things to Do in Hammondsport NY

Though the village may be small, there’s plenty to do. Once you read through our recommendations of things to do in Hammondsport NY, you’ll quickly discover that one day simply isn’t enough. And don’t worry we’re got some lodging suggestions for you at the end of the post, so keep reading! Keep in mind, this is not an exhaustive list of everything there is to do in Hammondsport. This is simply what we enjoyed during our 2-day visit.

The Curtiss Museum honors the life and legacy of aviation pioneer and motorcycle designer/manufacturer Glenn H Curtiss. Curtiss was born in Hammondsport in 1878. It was here that he worked with Alexander Graham Bell and others on the early development of aircraft and seaplanes. At the museum, marvel at a full-size replica of the first naval aircraft.

The museum also houses many fascinating exhibits and displays of Curtiss’ countless designs, creations, and achievements. Curtiss became the “fastest man on earth” in 1907 when he got his V8 powered motorcycle up to a speed of 136.4 mph! An exact reproduction of this bike is also on display in the museum. Because of Curtiss’ influence and contributions, Hammondsport is referred to as “The Cradle of Aviation”.

Admission to the museum is $12 (as of June 2019). Seniors are $10, students are $8 and children 6 and under are free. Hours vary by season, so check their website for specifics on their summer and winter hours. 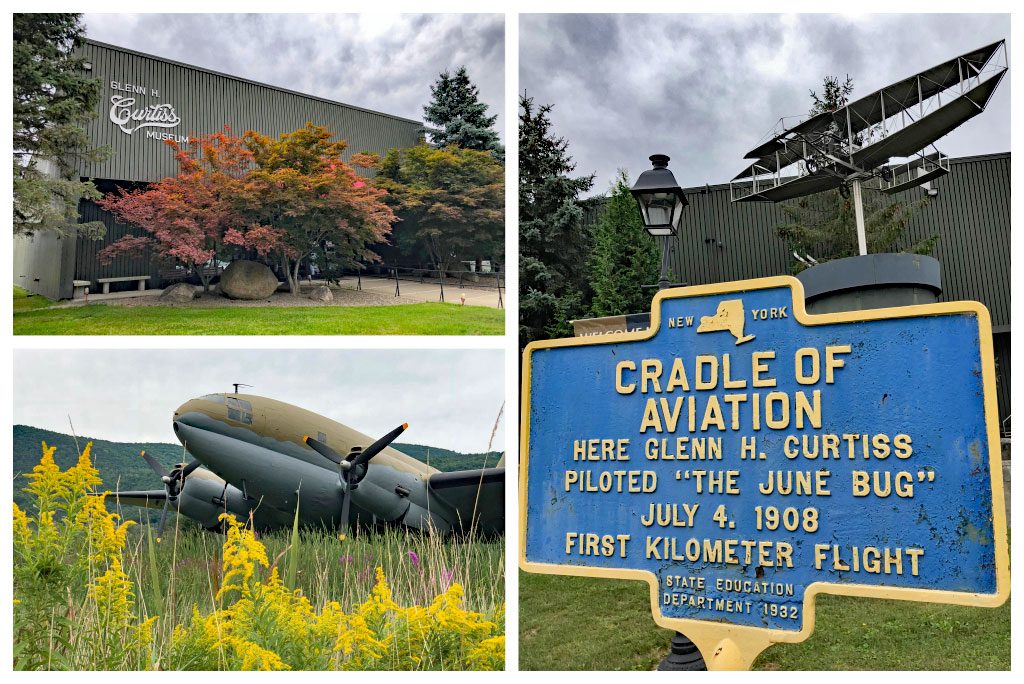 Go on a Seaplane Ride in Hammondsport

The tradition of flying continues, as one of the best things to do in Hammondsport is to take to the skies in a seaplane! See the village and its surrounding area from above. It’s only from the air that you’ll be able to see the unique Y-shape of Keuka Lake. 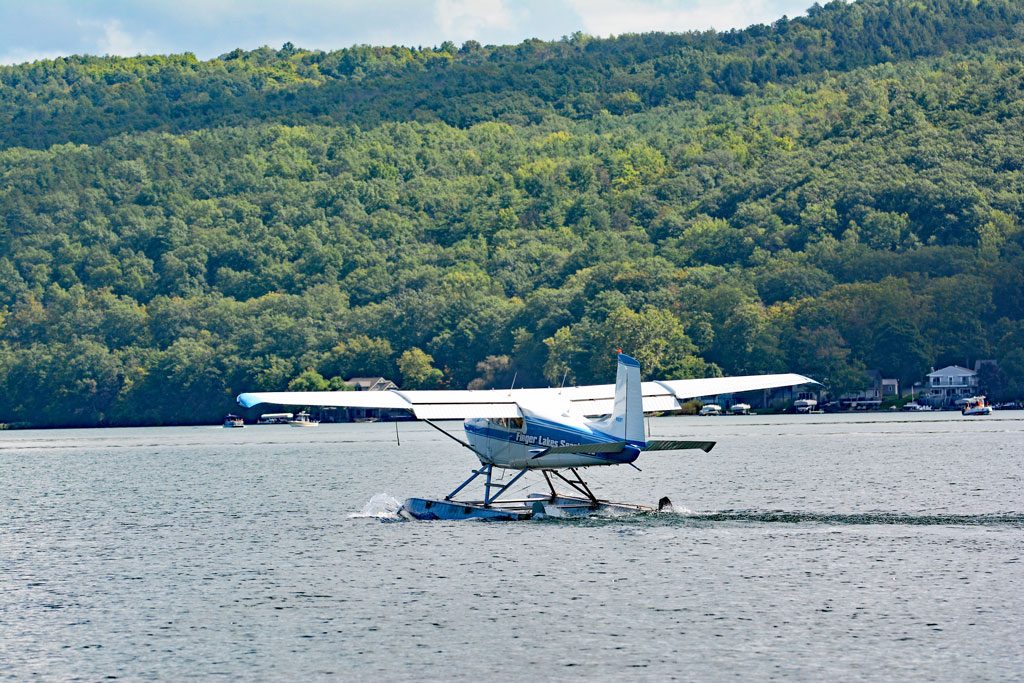 Check out Finger Lakes Seaplanes in Hammondsport and book your flight today! Choose from a 30-minute or 60-minute adventure depending on what you want to see. Here’s a sneak peak of Hammondsport village from above! You’ll need to hop in a seaplane to see more! 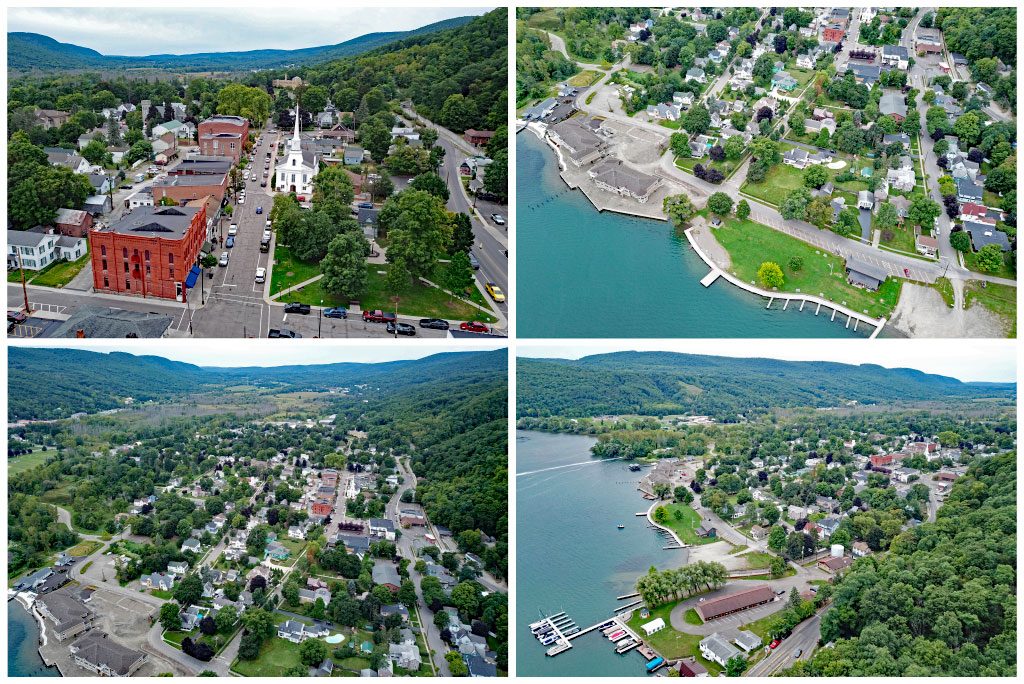 A trip to the Finger Lakes isn’t complete without a trip out on the water! We took a romantic sunset sail on a schooner boat on Seneca Lake, which you can read more about in our Things to Do in Watkins Glen write-up. And while in Hammondsport, we went on a scenic tour of Keuka Lake with OnKeuka. They offer a wide variety of services (April-October) including winery and brewery cruises taking you between wineries/breweries on Keuka Lake.

You can also hop aboard for a casual scenic cruise and swimming adventure, like we did. Seeing the foliage along the shoreline would make for a wonderful boating excursion with OnKeuka if your visit coincides with the leaves changing colors in the Fall. They also offer water taxi service to many places around the lake. If you’re at a waterfront rental somewhere along the shores of Keuka Lake and want to get to Hammondsport in style, give OnKeuka a call! 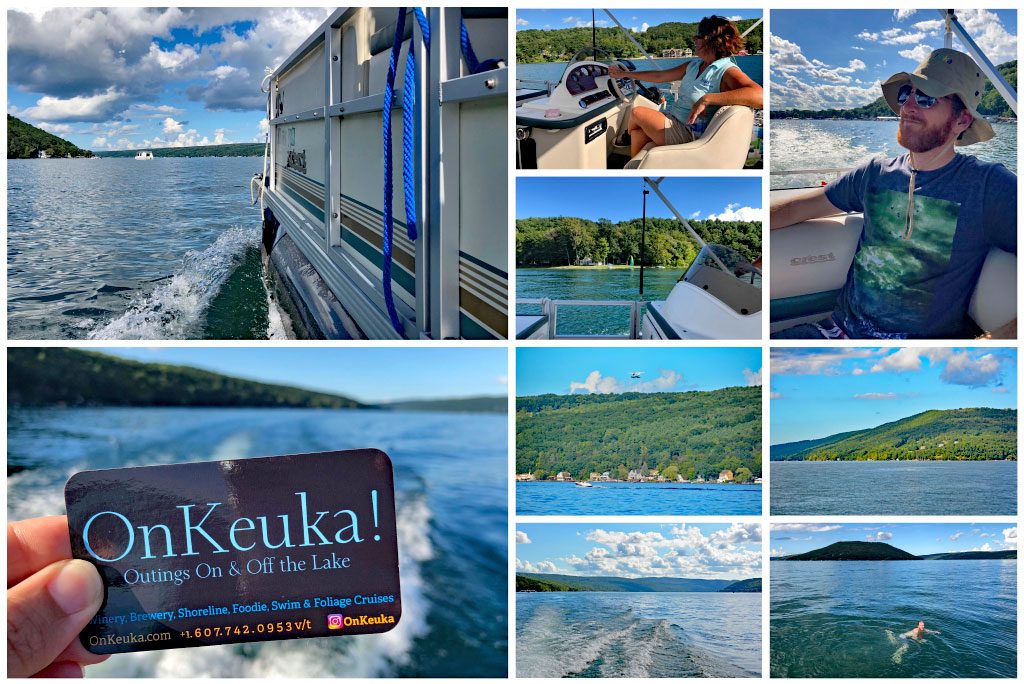 We only made it to two of the several Hammondsport wineries, as we were a little more focused on sampling Finger Lakes beer on this trip. However, of the two we picked, we’re convinced we picked the two best wineries in Hammondsport!

Dr Konstantin Frank Winery was our very first stop when we arrived to Finger Lakes Wine Country and boy was it a great first impression! From their flagship dry Riesling to their Blaufrankisch, which won NY Best Red in 2016, they have an impressive collection to taste. Our favorites included the Muscat Ottonel, the sparkling Celebre, and their Merlot. In a region famous for Rieslings, Dr Frank Winery sure offers a lot of wonderful reds!

In addition to producing an array of award-winning wines, the winery also boasts an absolutely breathtaking view over vineyards and Keuka Lake beyond. Dr Frank revolutionized the wine growing industry not only in the Finger Lakes, but throughout the US, by making delicious wines using European vinifera grapes. Stop by and learn the history of how the wine-making industry got started in the Finger Lakes and enjoy the sips and sights at Dr Konstantin Frank Winery. 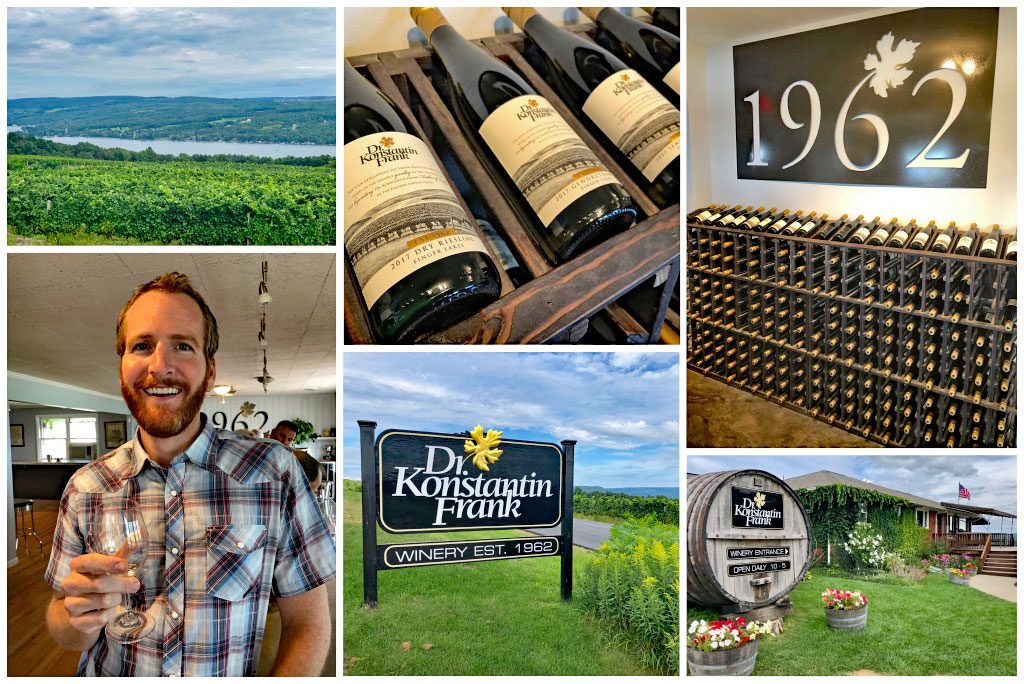 For even more delicious wine and spectacular lake views, head on over to Heron Hill Winery. Their tasting room was chosen as one of the 10 Most Spectacular Tasting Rooms in the World by Travel & Leisure Magazine. We didn’t prefer the reds here so much, but we very much enjoyed several of their whites. Our favorites included their classic Chardonnay unoaked, their classic semi-sweet Riesling, and their Lady of the Lakes (bubbly) Moscato. We happened to visit on a day when there was live music (offered July-October). So, following our tastings, we purchased a glass of our favorite and sat out on the patio to listen to the band! 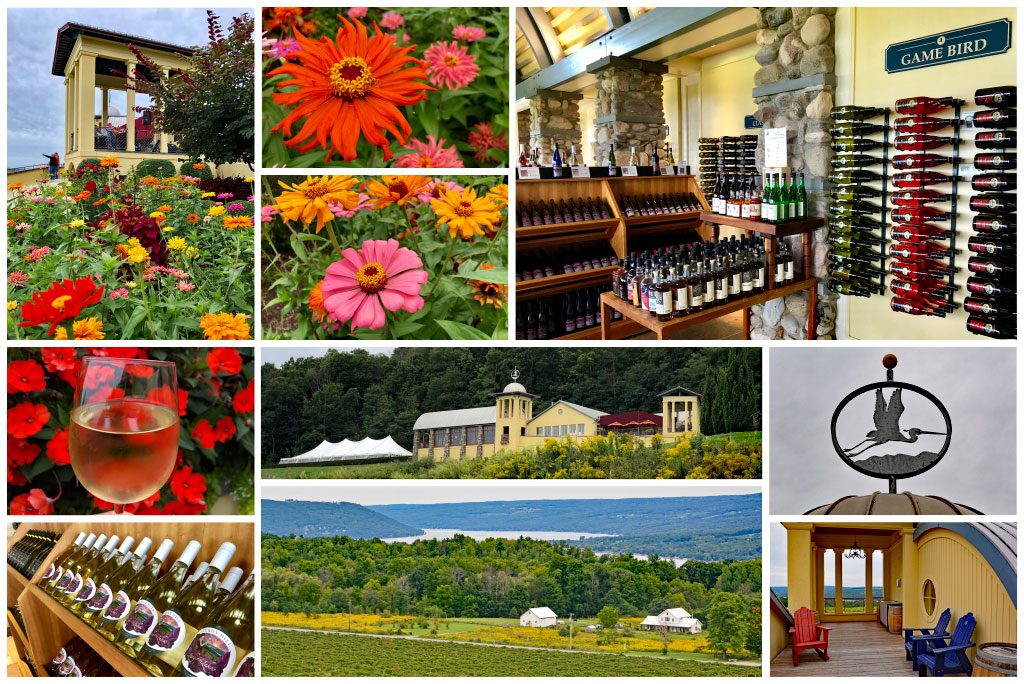 There are 5 breweries in Hammondsport (as of June 2019) and we were able to visit 4 of the 5 during our stay! Our absolute favorite in Hammondsport is the Brewery of Broken Dreams, so be sure to check them out during your visit! Keuka Brewing Company is another favorite of ours… especially their seasonal pumpkin cream ale (only available in the Fall).

Keuka Brewing was named New York State’s Best Craft Brewery in 2014 at the New York Craft Beer & Food Festival. At that same festival a year later, Finger Lakes Beer Company won a Silver Medal for Best Craft Beer in New York. Needless to say, there is no shortage of great beer in Hammondsport! You can read more about these breweries, in addition to all of the breweries we visited during our 12-day visit to the Finger Lakes, HERE. 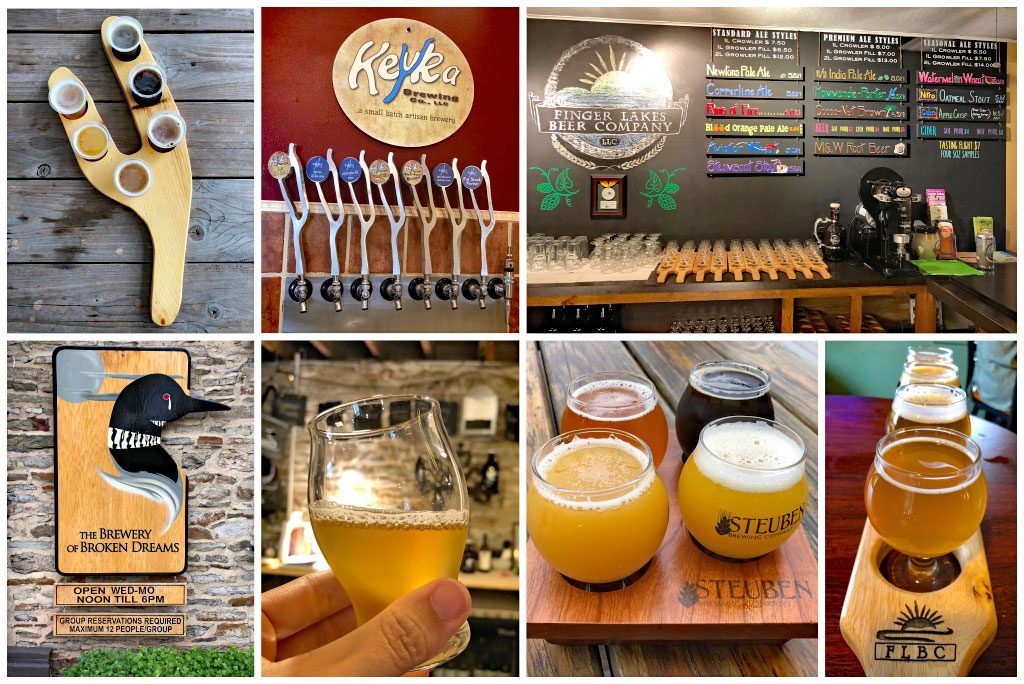 Hammondsport has several dining options to choose from ranging from ice cream parlors (Crooked Lake Ice Cream Parlor) and coffee shops (Aroma Coffee Art Gallery) to Italian bistros (Union Block) and upscale grills (Timber Stone Grill, a local favorite). The Village Tavern Restaurant is another local favorite offering an eclectic menu and an outstanding Sunday brunch. Looking for classic American cuisine? Head to Burgers & Beer of Hammondsport. These are just a few of the Hammondsport NY restaurants you’ll have to choose from in this delightful little village by the lake. 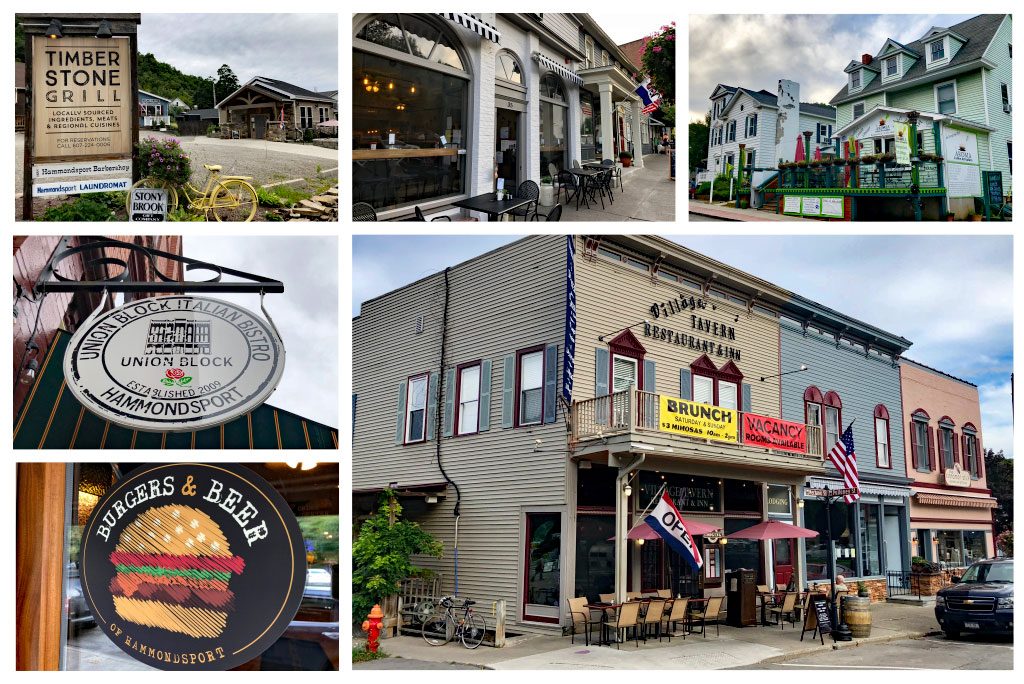 The Hammondsport slogan is “There’s always something happening in Hammondsport“. That was certainly the case when we were in town! Whether at a local winery, brewery, or in the village square, there is always something going on! We just so happened to visit during one of Hammondsports’ biggest festivals – Wings & Wheels, an annual seaplane and car show. Want to see what’s going on during your visit? Check out the Hammondsport events page on the local Chamber’s website. 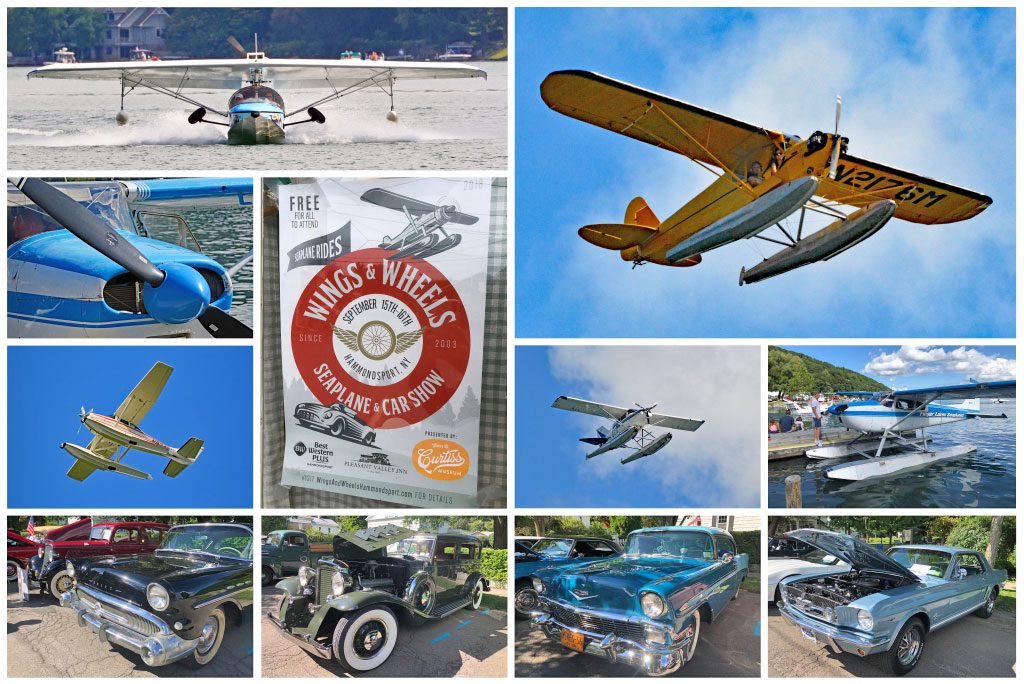 Because there is so much to do in Hammondsport, you’ll want to stay for more than just one day. Good thing there are several Hammondsport lodging options to choose from ranging from inns and bed and breakfasts to self-catering home rentals. During our visit, we stayed in a house rented out by the folks who own the Village Tavern Restaurant. Not only do they have a 4-room inn located just above the restaurant, they also have a few rental homes in Hammondsport located in close proximity to both the lake and the village square.

You can read more about our stay at the Gulf Stream House in our write-up about Finger Lakes lodging, which also includes information about accommodations near Seneca and Cayuga Lakes. 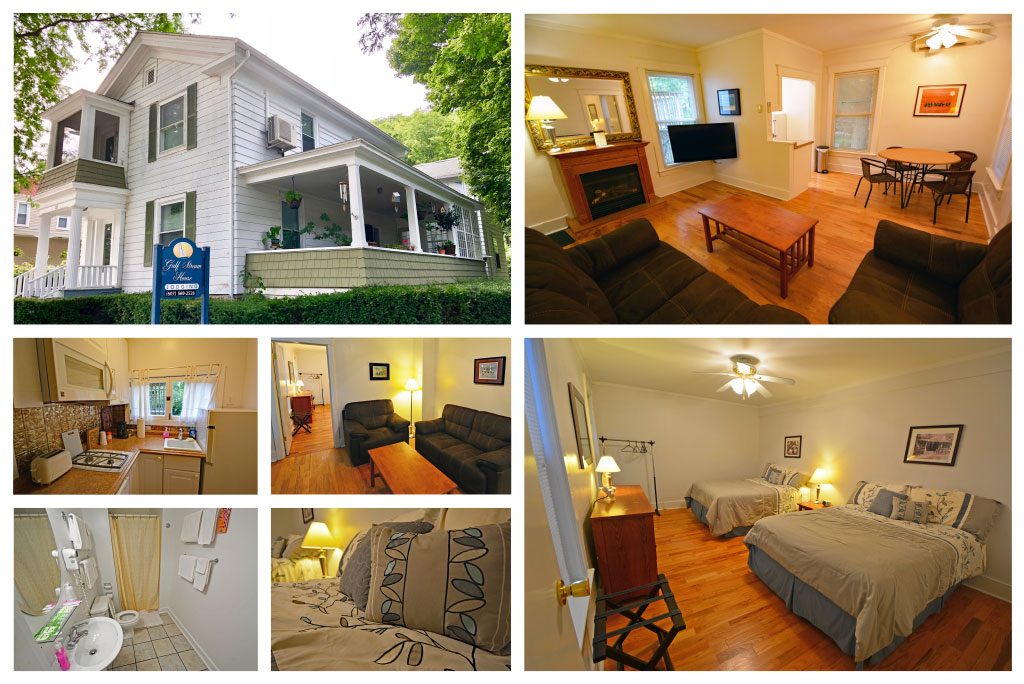 Now you can see why Hammondsport was voted the Coolest Small Town in America! With so much goodness packed into such a quaint village, it’s easy to see how this tiny town by the lake earned this honorary title. So, if you love small towns like us, definitely put Hammondsport on your list!