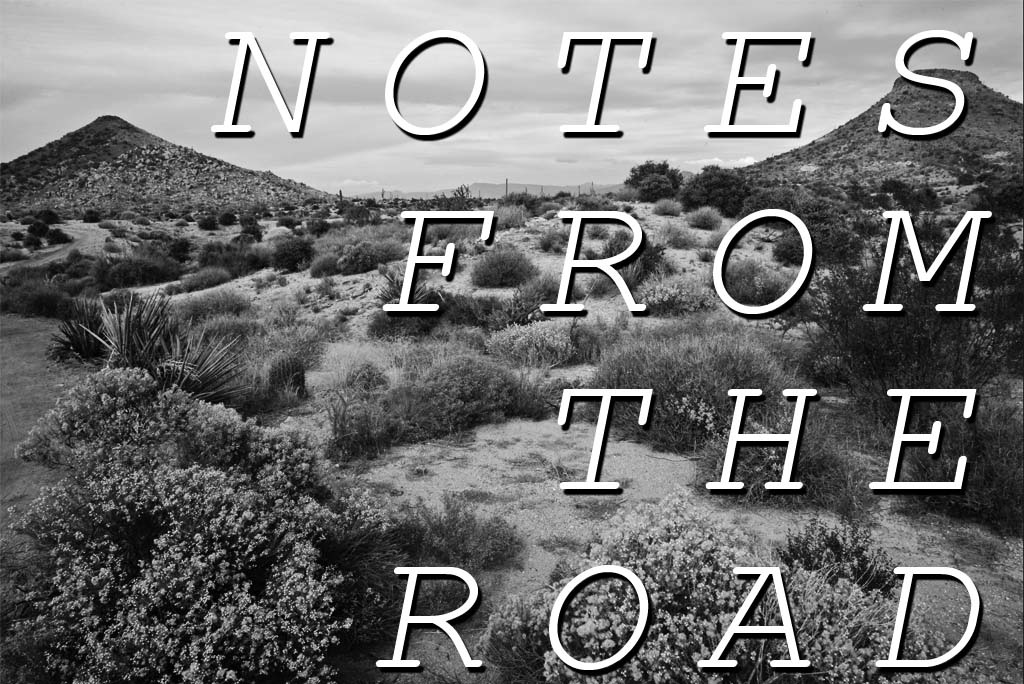 The idea of a true frontier has always been romanticized and is almost always a false notion. What was a frontier to the American settler was actually home to the Tribes. Perhaps they are among the few who know what it means to walk a true frontier.

The world is a busy place. What used to be empty wilderness is now mapped and trod, lined with the litter of the ignorant to prove it. There must be a separation between what is and what you wish to see in order conjure images of a land untamed; of a time before cars, before electronics, before pop culture.

For me, the gentle shift to my imagined perfect frontier begins on the highway, heading east from San Diego. The land turns red and brown and tan. The mountains flatten except for the occasional rock that juts up from the earth as if hammered like a nail from the other side.

I’m in Arizona now. The American southwest. Scottsdale is a nice town, smaller than Phoenix, thank God, but clean and welcoming. The roads are wide, and most drivers seem content to obey the speed limit. Perhaps one of the only other U.S. towns I’ve experienced this phenomenon has been in New Orleans, but maybe I was just there during a full moon.

With each passing day, my capacity to endure large crowds shrinks. I’m trying to find a way to fight it, since part of me thinks it’s mental, but I get headaches if I’m in a big group of people for too long. Maybe it’s a form of claustrophobia, or maybe I am simply turning into a grouch.

On the other hand, I can’t get enough open space. I’ve always known I wasn’t a big-city person, but my trip to Iceland earlier this year really helped me to confirm that aspect of my character. I will take a blank field of ice over a crowded city any day of the week.

Likewise the desert. Looking out my condominium window now, I see a vast stretch of sandy ground, punctuated by tall cacti. The only scar on this “frontier” is the highway that cuts through it half a mile away. It’s too far to hear the traffic noise but not far enough to ignore.

There are many places to go where you can look to the horizon and see nothing but the vastness of nature; views unimpeded by power lines or freeways.

Also, can the idea of a true frontier exist without being accompanied by a burden-free life? Can it ever live up to the promise of untethered freedom if you know you have to get back to your job, your mortgage, your taxes?

I like to imagine my frontiers as being filled with the promise of possibility. When I look out my window, I paint that highway out of my mind and I see only a wide desert as it once was, stretching to all points of the compass. I like to imagine a cowboy sitting alone by a fire, his fingers interlaced over his stomach as he waits for the aches of the day to slowly leave his muscles. The sky is a deep orange near the horizon because the sun has just set. They won’t build any highways here for some time, but when they do, this man’s frontier will be gone. It was never his to begin with, but that’s okay, because all he’s thinking about is tomorrow and the bright sunrise that will be there to greet him.