We’ve been to Scotland twice now and both times we visited Loch Lomond & The Trossachs National Park, once in the summer and once in the early spring. The summer brought about warmer temperatures and more greenery, but also more visitors. In April, we were met with much cooler temperatures, a brown-hued landscape and many trees without leaves, but not as many people. Though, truth be told, even when we visited in the summer, the crowds weren’t enough to be bothersome. The park is comprised of 720 square miles (1,865 sq km) of unspoiled landscapes leaving plenty of space for you to escape the bustling cities and connect with nature! With a variety of transportation options including local buses, water buses, cycling, hiking, and well-marked roads, getting around Scotland’s 1st national park is a cinch.

Things to Do Near Loch Lomond


Loch Lomond is the park’s main attraction. It is the largest expanse of fresh water in all of  mainland Britain. The loch contains 23 islands, is 4 miles (39 km) long and between 0.75 miles (1.21 km) and 5 miles (8.0 km) wide. For a great introduction to the park and its namesake loch, take a stroll along the Millennium Forest Path (1 mile/1.6 km) in Balmaha. 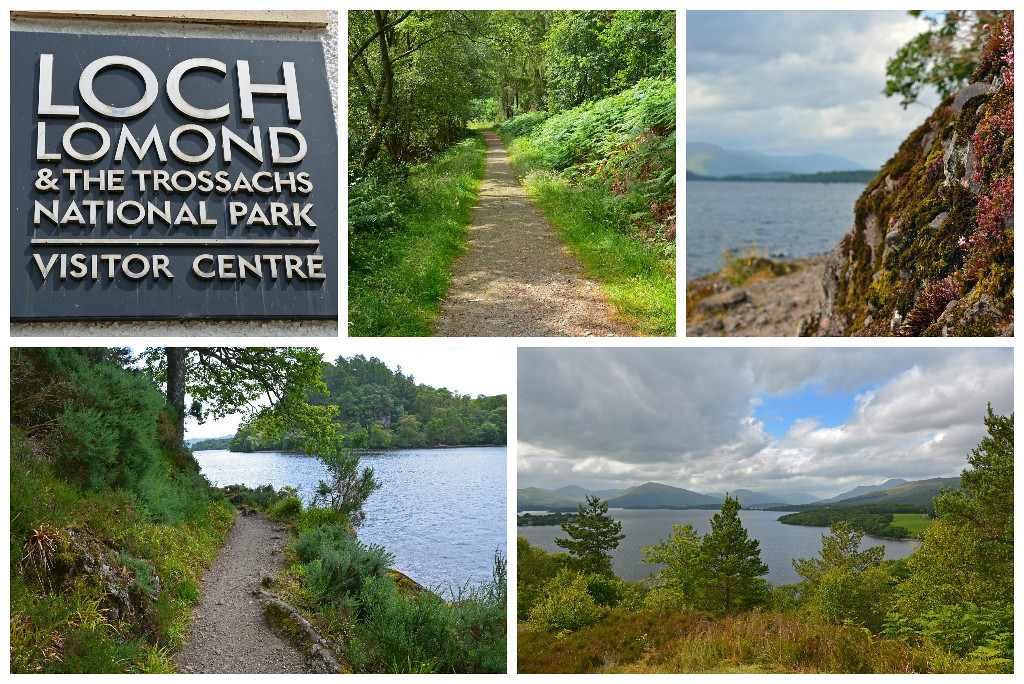 There are several other small towns along her shores you can visit that we’ll discuss a little later. For other great viewpoints, take advantage of the parking locations around the perimeter of the loch, like the Jubilee Point picnic area or the visitors center at Inveruglas which contains the viewpoint An Ceann Mòr. This is one of several scenic structures throughout the park celebrating the Year of Innovation, Architecture, and Design (2016). For an even closer look at the loch, hop aboard a Cruise Loch Lomond boat to experience the beauty and tranquility of the loch while on the water.

Made up of 200 acres, Balloch Castle Country Park is a beautiful place to explore along the shores of Loch Lomond.

With miles and miles of trails to traverse, a 19th-century walled garden, plenty of great places for a picnic… oh, and a castle, the park is a wonderful spot to spend the afternoon.

Located just over three miles from the village of Crianlarich on the A82 are the Falls of Falloch. Following a very brief walk on a designated trail, you will come to the point where the River Falloch falls 33 ft (10 m), creating a beautiful scene. The falls are also where you will find another one of the design structures celebrating the Year of Innovation, Architecture, and Design (2016). Created by John Kennedy, this steel structure, entitled Woven Sound, provides visitors with a close look at the falls.

Just a mile south of the Falls of Falloch, you will come upon the Drover’s Inn. Stop in for a pint, a hearty meal, or stay a few nights in one of their 30 rooms. Though if you do stay the night, just know that there reportedly have been ghostly encounters at the inn. Nonetheless, it’s a fascinating hotel with a stunning mountain backdrop right at the north end of Loch Lomond. 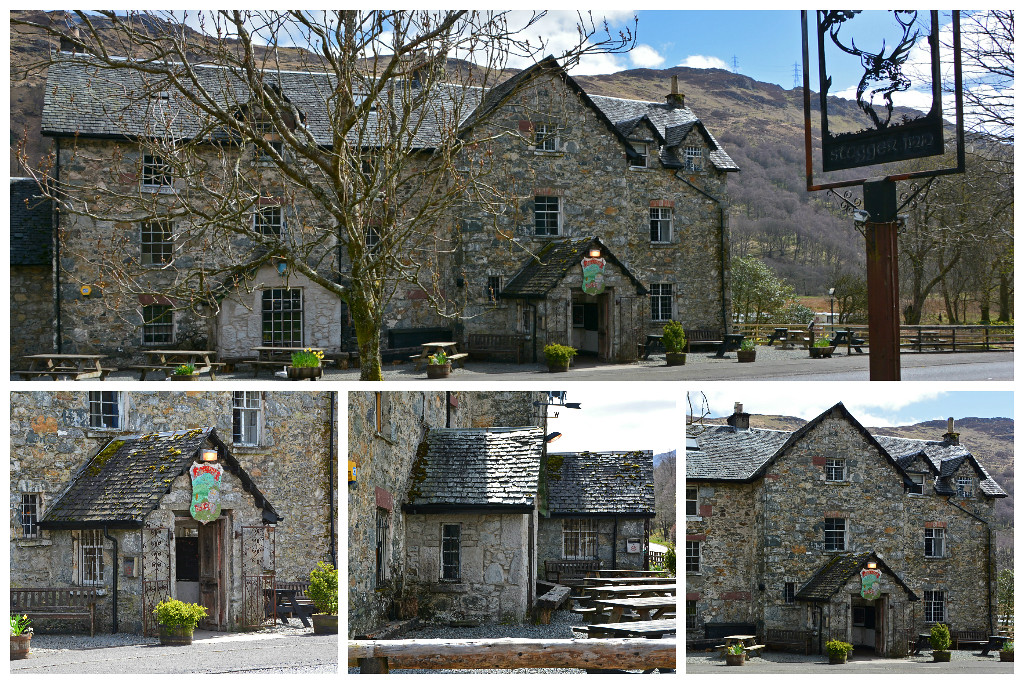 On the western side of Loch Lomond is the adorable village of Luss. Much of the current village dates to the 18th and 19th centuries. The Scottish drama Take the High Road was filmed on location here in the 80s and 90s. From the pier on the loch, the mountain of Ben Lomond dominates the skyline to the north.

The 19th-century parish church has a ceiling made from Scots pine rafters, beautiful Victorian stained-glass windows, and one of the most fascinating cemeteries we’ve visited in our travels. We came upon gravestones dating back to the early 1700s.

We stayed in the town of Helensburgh during our second visit to Loch Lomond. It was a great starting point for day trips throughout the national park.

The town itself is worth exploring, with its fascinating buildings, waterfront promenade, and several parks and gardens.

The bustling town of Callander lies just between the Highlands and the Lowlands, as it is located immediately south of the Highland Boundary Fault. It is a great town to explore on foot as you stroll past cafes, pubs, and souvenir shops. 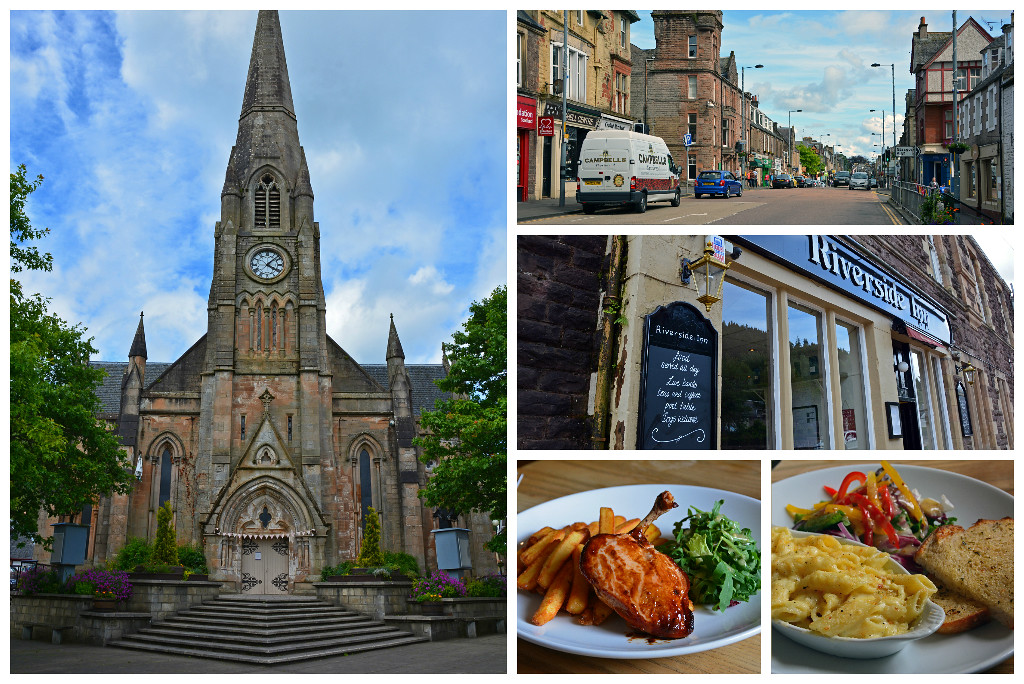 Here you can wander through the oak woodlands that used to cover most of Scotland. Take a stroll along the shores of Loch Lomond on the Millennium Forest Path (1 mile/1.6 km) or climb to the top of Conic Hill (1,184 ft/361 m). Reward yourself with a tasty treat from the Old Tree Inn across the street from the visitor’s center.


Loch Lomond & The Trossachs National Park contains 22 lochs, including the park’s main attraction – Loch Lomond, discussed earlier. While we didn’t get a chance to explore all of them, here’s a look at just a few!

The 11-mile long Loch Katrine is the setting of Sir Walter Scott’s poem The Lady of the Lake. Hiking and biking paths run alongside the loch, making it a wonderfully scenic place to explore. For an exhilarating experience, climb the nearby Ben A’an for incredible views over the loch and surrounding area. For something totally unique, take a ride on Loch Katrine aboard the 100+ year old Steamship Sir Walter Scott.

This steamship has been cruising the scenic waterways of Loch Katrine since April 1, 1900. She is still powered by her original steam engine, though her boilers have since been replaced to be more environmentally friendly!

Loch Venachar is situated in the heart of the Trossachs between Callander and Brig o‘ Turk just over Duke’s Pass via the A821. The loch is 4 miles (6.6 km) long, .6 miles (1 km) wide and up to 108 ft (33 m) deep in parts. It contains an abundance of brown and rainbow trout, though you need a fishing permit to fish from the shore or in a boat.

Nestled between the mountains of Ben Ledi and Ben Vorlich, Loch Lubnaig creates a picturesque scene perfect for renting a canoe and paddling on the loch. Here you will find another design structure celebrating the Year of Innovation, Architecture, and Design, entitled Faerie Hollow.

To see the final structure in the Scenic Routes initiative, we passed Rob Roy’s grave site and ventured out to Loch Voil. LookOut is set in the middle of a field between Loch Voil and Loch Doine reflecting the scenic surroundings. We were more impressed with the beautiful landscapes than we were with the structure itself, as it was covered in animal droppings, but it was still a nice road trip nonetheless.

Wildlife is abundant throughout the park. Keep an eye out for osprey, golden eagles, red squirrels, red deer, otters and seals, and of course those adorably shaggy highland cows!

Located in Queen Elizabeth Forest Park, the Lodge Forest Visitor Center is a wonderful place to explore nature and experience wildlife. Follow the Waterfall Trail to gaze upon the impressive Little Fawn Waterfall. Thanks to a wildlife hide we were able to spot a few indigenous red squirrels along with a wide array of beautiful birds. The Lodge also has live CCTV footage in the nest of ospreys for a unique viewing opportunity. And if you’re feeling adventurous, you can take a ride on two of Britain’s longest zip wires 150ft above the forest floor at Go Ape! located at the visitor center.

Duke’s Pass is a 7 mile (11 km) stretch of road starting at the Lodge Forest Visitor Center in Aberfoyle. It takes motorists and cyclists through some of the most scenic parts of the Trossachs landscape. For a minor scenic detour from the route, take Three Lochs Forest Drive, a quiet forest drive complete with scenic walks.

Rest and Be Thankful

Be sure to stop off at this appropriately-named scenic viewpoint along the A83. It is the highest point on this road at 803 ft above sea level, dividing Glen Kinglas from Glen Croe. Take a moment to ‘rest and be thankful’ for the fact that you have the opportunity to explore beautiful Scotland! 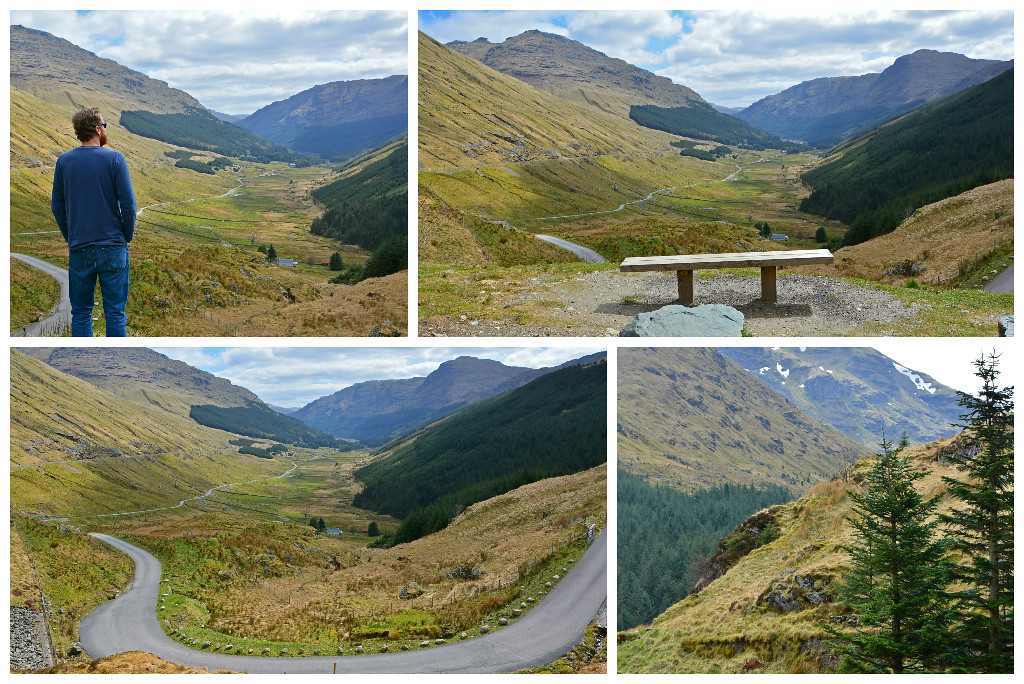 Just a little ways down the road from this scenic viewpoint, you’ll pass the picturesque setting of Butterbridge.

Though there are hundreds of miles of hiking trails throughout the part, we only partook in a few. All the more reason for us to go back! We found some of the greatest hiking options in Argyll Forest Park on the western edge of the national park.

The 120-acre Benmore Botanic Garden boasts a collection of 300 species of rhododendron, along with an impressive collection of plants from Scotland and around the world. Just across the street from the garden entrance is the Big Trees Walk.

Wander through Californian Redwood, Western Hemlock, and Douglas Fir trees. The trail is steep with a few navigable obstacles like the fallen Silver Fir tree that was brought down in the Boxing Day gales of 1998.

Puck’s Glen was definitely one of our favorite finds in the park! The trail is actually connected to the Big Trees Walk, though we only did part of the Big Trees trail and started Puck’s Glen from its car park just a short ways down the road. 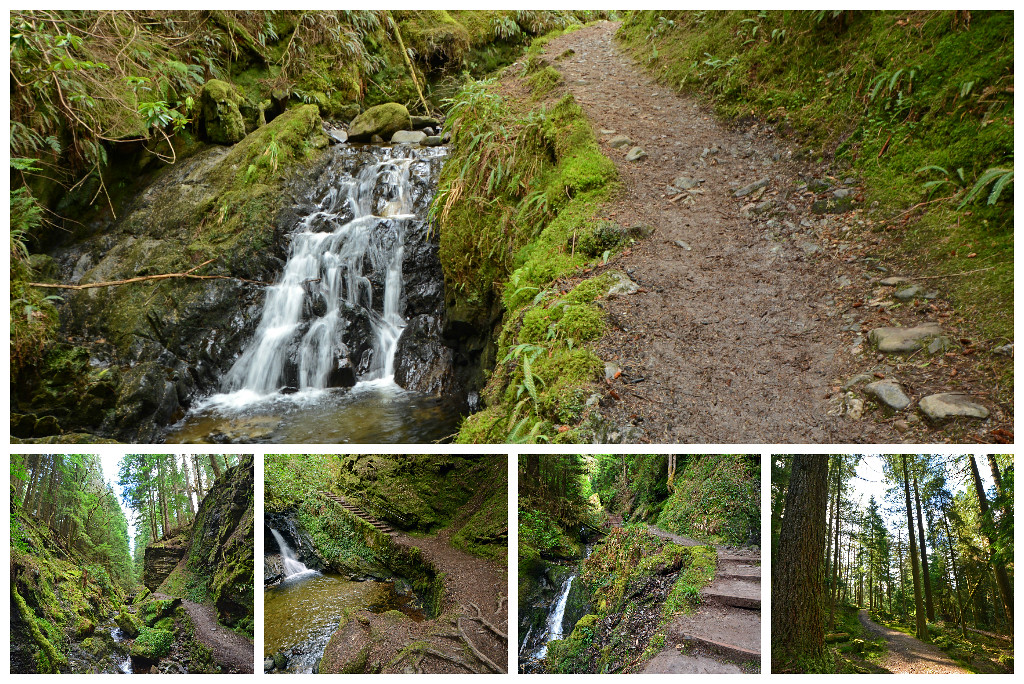 Located 240 feet (73 m) atop a volcanic outcrop known as Dumbarton Rock sits Dumbarton Castle. The castle served as a royal refuge during the Dark Ages and has the longest recorded history of any stronghold in Scotland.

After a leg-trembling 557 steps, you are rewarded with outstanding views over the Firth of Clyde from the White Tower Crag.

We didn’t actually visit Inverarary, though we had a great view of the town and its neo-gothic fairytale castle from across Loch Fyne.

So, as you can see by this lengthy post, there is plenty to do in Loch Lomond & The Trossachs National Park. Though we have now visited twice, we could visit a third time and still have countless options of things to do and see! With its 720 square miles (1,865 sq km) containing 22 lochs, there is certainly no shortage of places to explore within the park.

For more about the Scenic Routes Initiative and information about the sculptures found throughout the park, visit the Loch Lomond & Trossachs National Park website.