As with any renaissance city, there are many churches in Paris. The 12th century Notre Dame Cathedral was located a two-minute walk from our hotel, so we walked past it frequently each time we went out to explore the town. 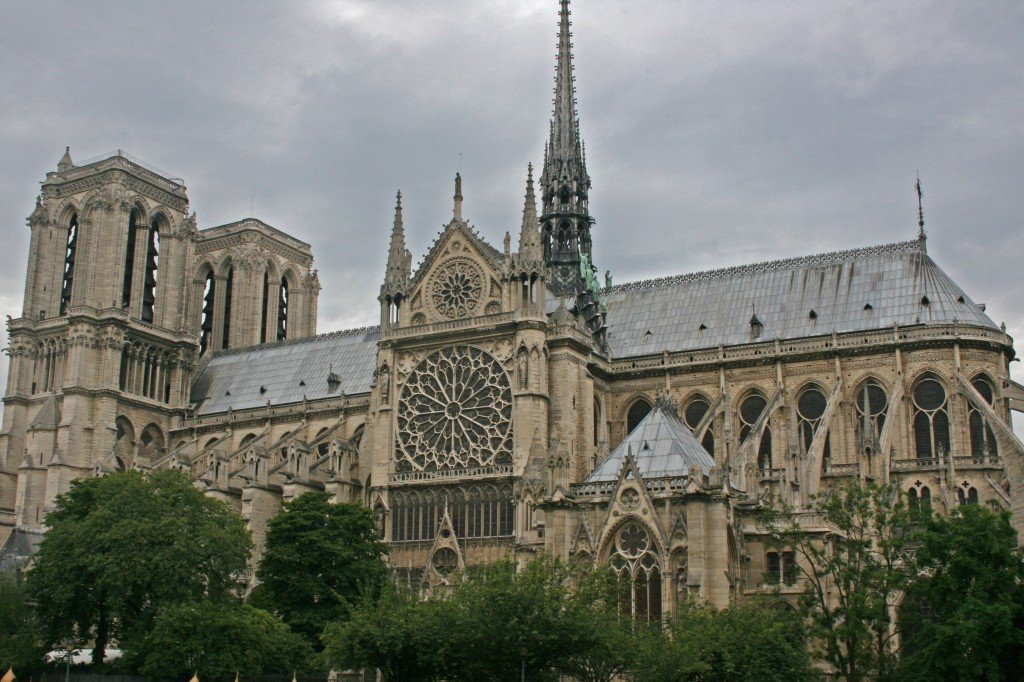 Did you know that it took over 182 years to build the Notre Dame?! Bishop Maurice de Sully started construction in 1163 and it was 1345 before the cathedral was completed, partly because the design was enlarged during construction. 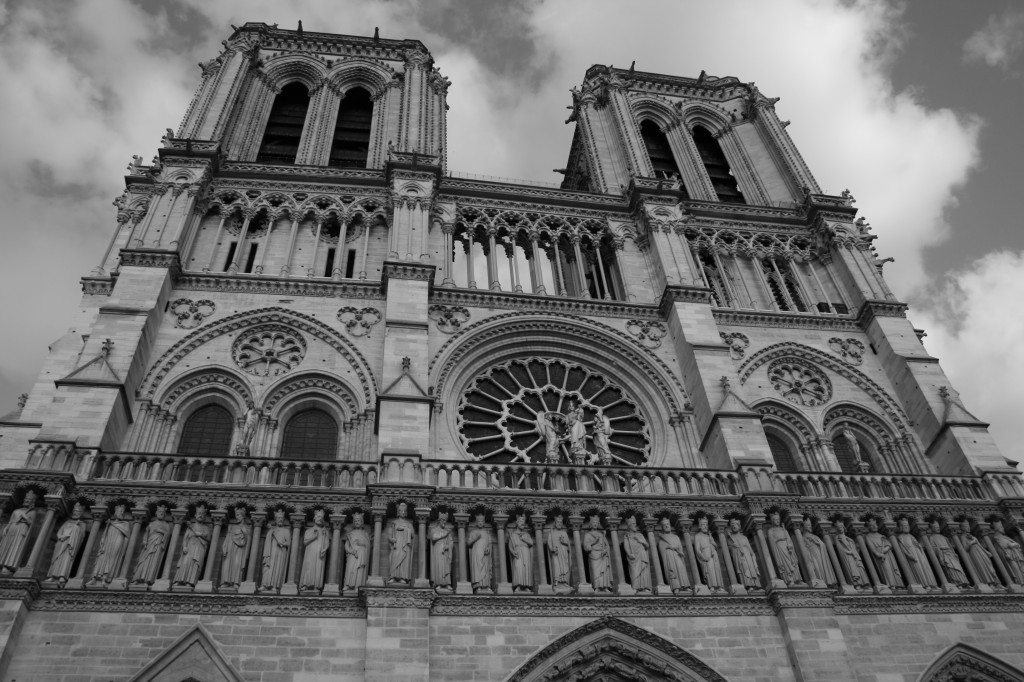 It is magnificent from every angle, inside and out! The intricate details are simply stunning! The west frontal facade consists of three wide portals. Above the portals is the Gallery of Kings (28 statues of Judean Kings) and above that are the famous gargoyles. 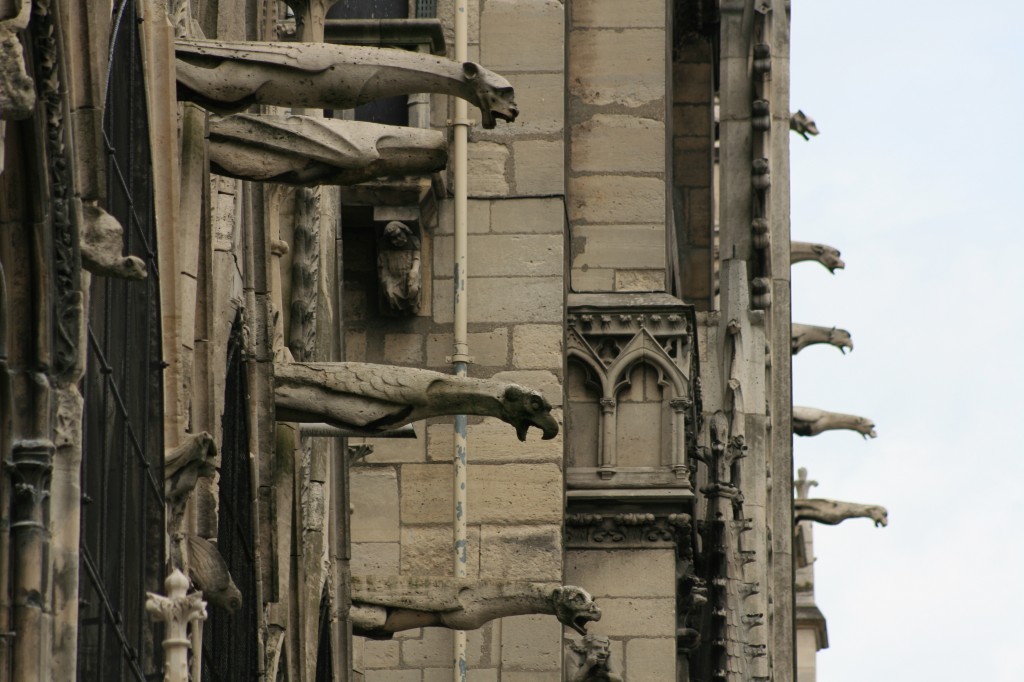 During the Revolution, many of the cathedral’s sculptures, gargoyles, and interior were removed or demolished. It wasn’t until the 19th century that Victor Hugo wrote ‘Notre-Dame de Paris’, making the Parisians realize the cathedral was worth restoring. (If you have the Paris Museum Pass, entrance to the bell towers is included, otherwise it’s  €8,50 (for adults) to see where the fictional Quasimodo was locked away. For more information about the Paris Museum Pass and other other museums and monuments included in the pass, check out our Museums of Paris post.) 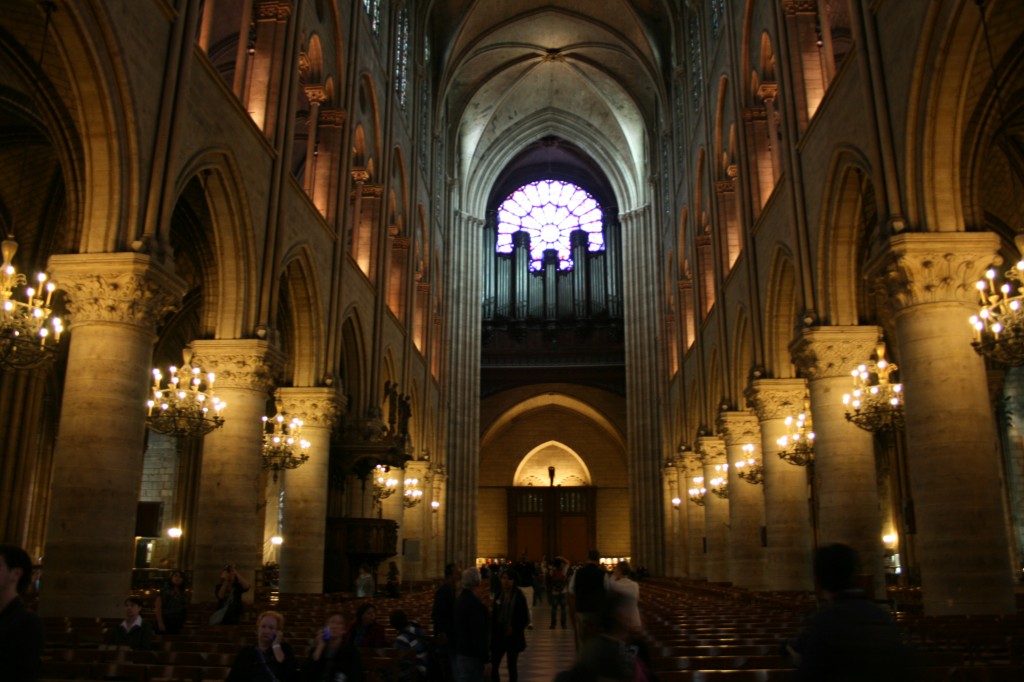 The twenty-year-long restoration was led by a local architect, Eugène Emmanuel Viollet-le-Duc. The cathedral was again restored from 1991-2001, preserving the historic architecture. 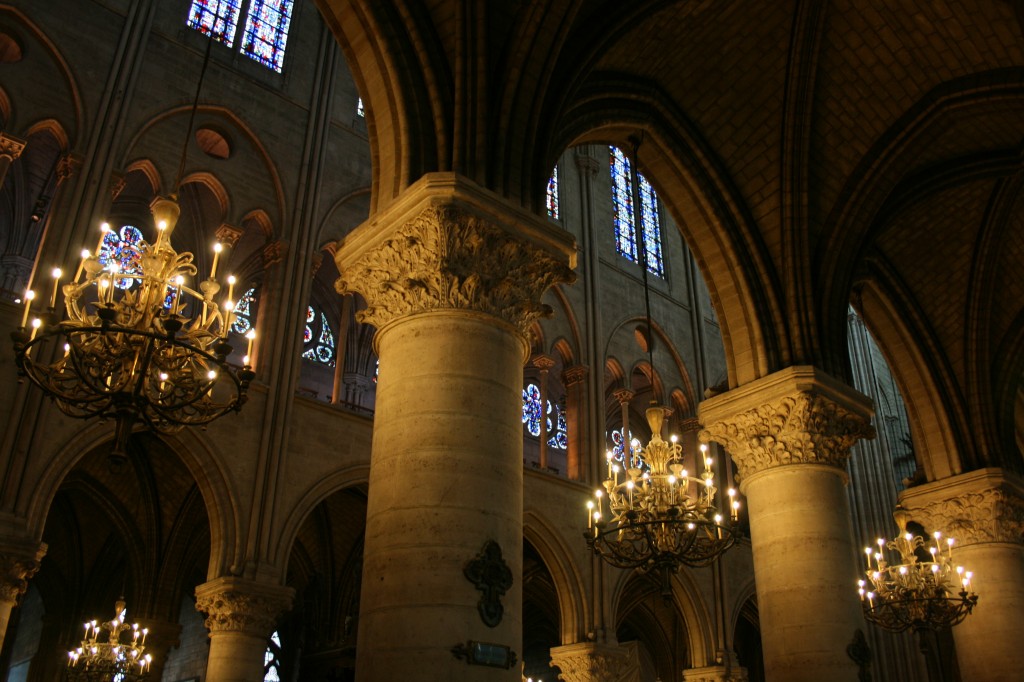 The interior is a sight to behold. (Entrance to the cathedral is free!) The stained glass windows are absolutely magnificent. The largest rose window is an impressive 43 feet (13 meters) in width. 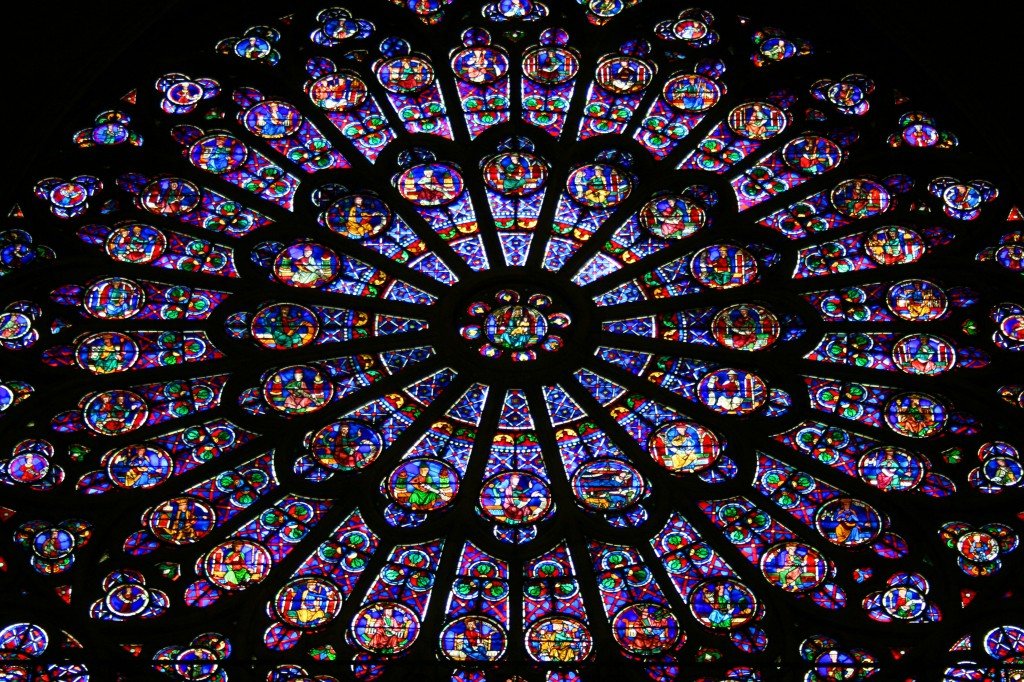 The Sainte-Chapelle (Holy Chapel) is a royal medieval Gothic chapel, located on the Île de la Cité in the heart of the city. Erected by Louis IX, starting in 1242, this magnificent Rayonnant-style of Gothic architecture was originally designed to house precious religious treasures. The chapel was completed just six years after the original ground-breaking. 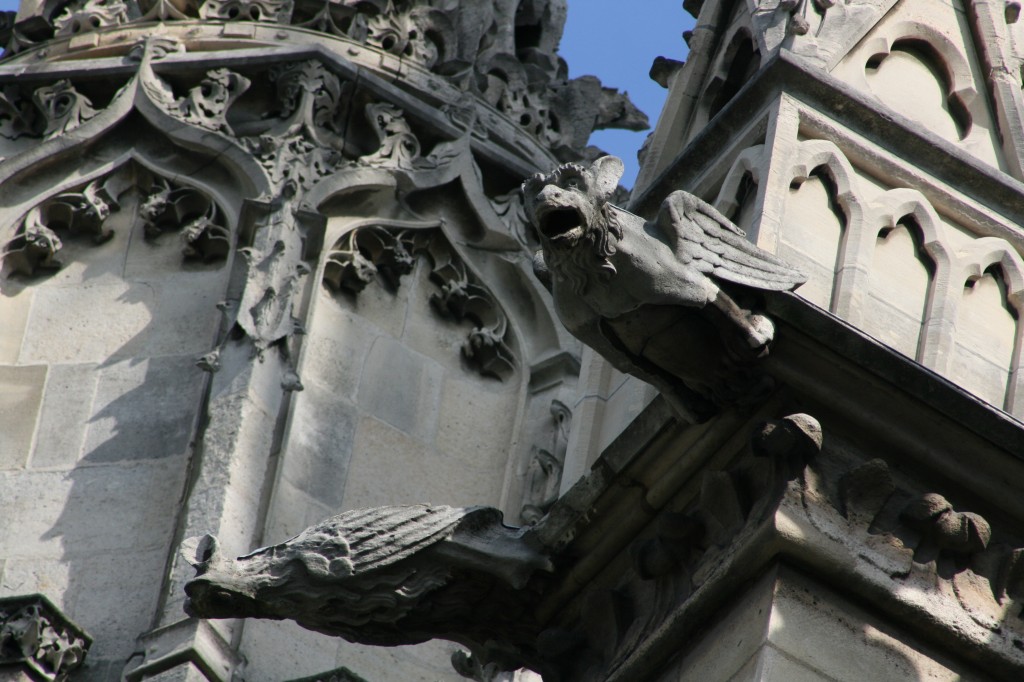 The stained glass covers a total of 6,456 sq ft (600 square meters) in area and 2/3 of them are still thirteenth century originals. Unfortunately 1/2 of the chapel was covered with scaffolding and a white covering during our visit. It looked as if they were dusting the intricate windows, which is good for the sake of cleanliness, but not for our pictures! (There is an entrance fee to enter Sainte Chapelle, but if you have the Paris Museum Pass, entry is free!) 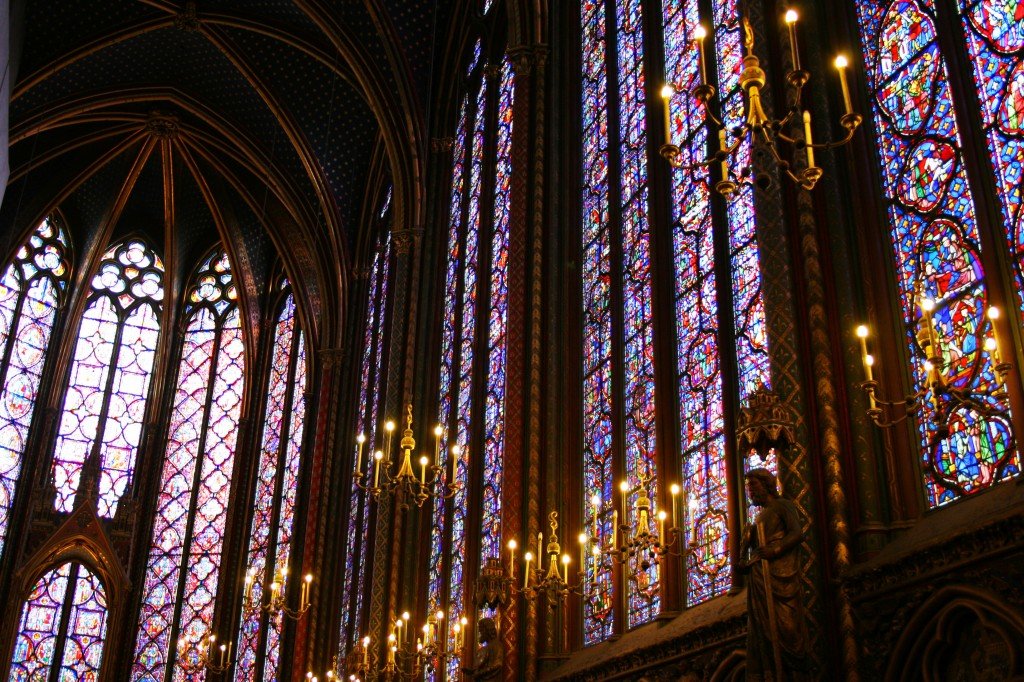 With its highest point sitting higher than the Eiffel Tower, the majestic building located on top of the Montmartre hill is Sacré-Coeur Basilica. (Entry to the Basilica is free!) 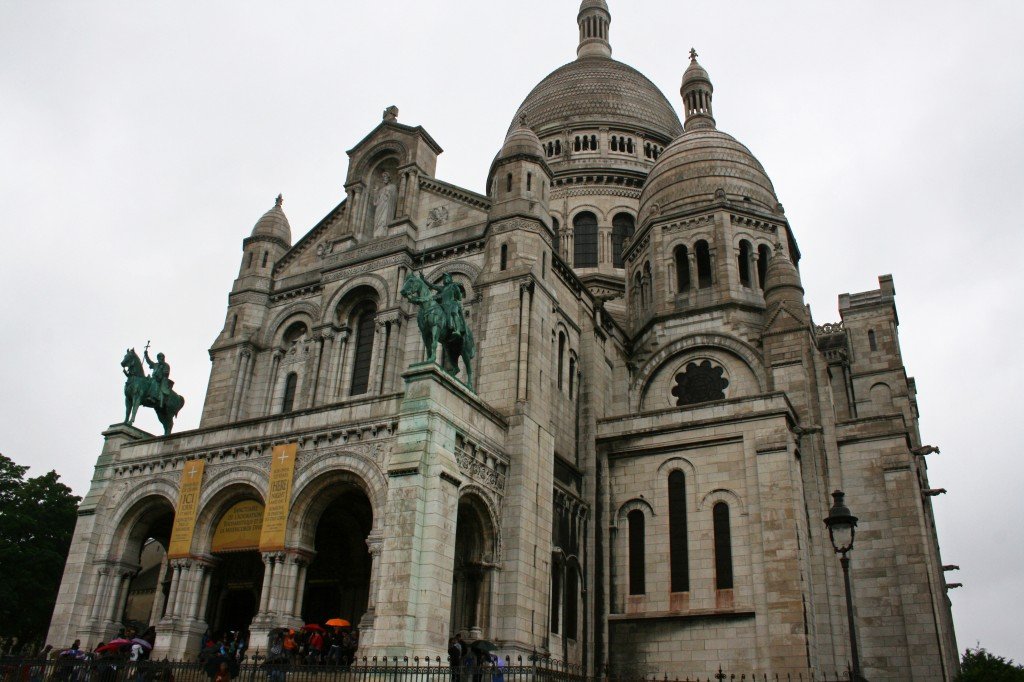 Construction of the Basilica started in 1876 with Paul Abadie as the lead architect. When he died in 1884, Lucien Magne took over, adding a 272 foot (83 meter) clock tower. 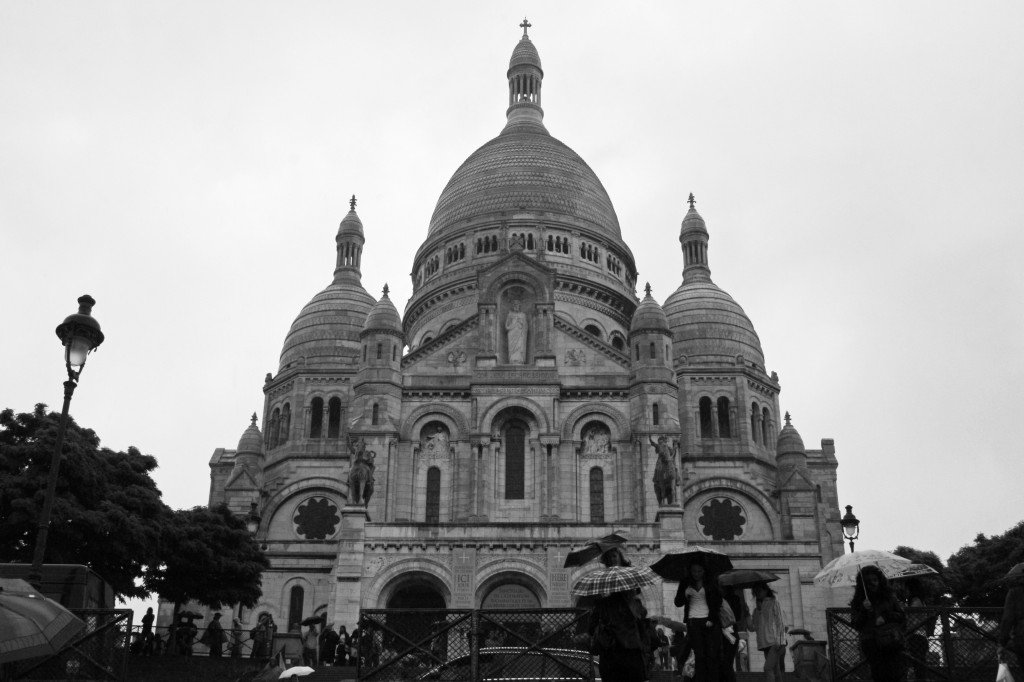 A visit to Montemarte is well worth your time, as there is much to see, do, and east in one of Paris’ most notable neighborhoods. Unfortunately, the day we visited it was raining, but we did our best to make the most of it! (Read about our day in Montmartre here.) The view of the city from Sacré-Coeur is one to be rivaled (when it’s not pouring rain, of course!)

For a (printable) quick-reference destination guide to what we did during our entire stay in Paris (where we stayed, what and where we ate, activities, money saving tips, etc.), click here.